London, U.K., 22 May 2008 (By Rebecca English, Daily Mail) - Prince Charles put himself on a collision course with the Prime Minister yesterday by playing host to the Dalai Lama.

The meeting took place at his London home, the day after Tibet's exiled spiritual leader was barred from visiting Number 10.

The Dalai Lama, who is here on an 11-day visit to highlight human rights abuses in his home country, took part in a tree-planting ceremony before spending an hour in private talks with the prince at Clarence House. 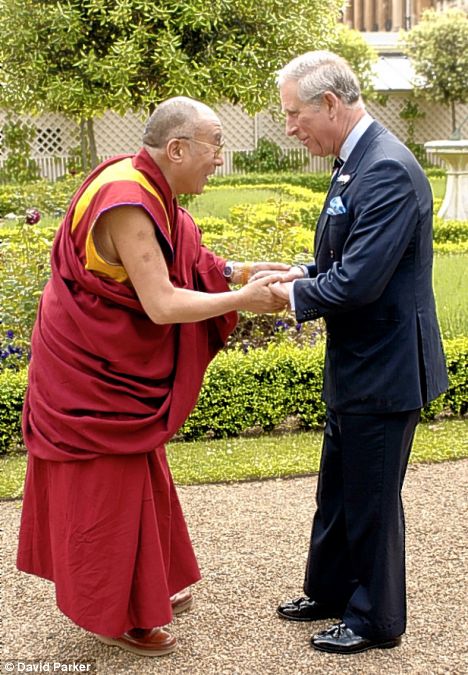 Welcome: Prince Charles is a supporter of the Dalai Lama and his cause and was delighted to meet him during his UK visit 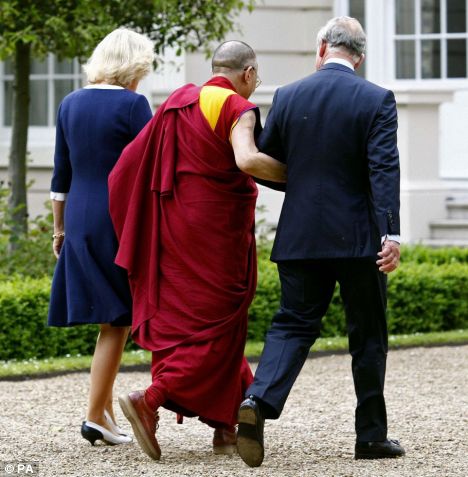 Gordon Brown has been accused of pandering to the Chinese authorities by refusing to invite the 72-year-old monk to Downing Street.

Instead, they will meet today at an inter-faith conference with other religious leaders at Lambeth Palace, the London residence of the Archbishop of Canterbury.

Critics claim Mr Brown is deliberately snubbing the Dalai Lama to avoid offending China after the protests on the London leg of the Olympic torch relay last month.

Tony Blair and John Major met him at Downing Street.

The monk, who won the Nobel Peace Prize for his opposition to China's occupation of Tibet, is also accused by the Chinese government of encouraging violent protests by Buddhist monks in Tibet earlier this year to mark the 49th anniversary of a failed uprising against Beijing. 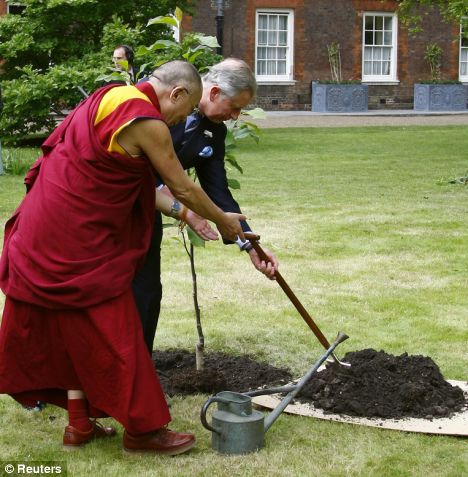 Sir Menzies Campbell, the former Liberal Democrat leader, said: "There is no reason why he should not be received at No 10 Downing Street. Many people will conclude that the Prime Minister is trying to have it both ways, to see him and not offend the Chinese government."

Prince Charles is a longstanding supporter of the Dalai Lama and his cause.

He held a reception for the Tibetan community at his home in 2004, which the monk attended, as well as meeting him privately in 2001 and 1999.

Over the past year he has also courted the Chinese community and now employs a member of staff to oversee his developing interest in the country.

Clarence House declined to comment on the talks yesterday except to say they concerned "spiritual issues".

A senior royal source said: "The Dalai Lama specifically requested that he meet the prince while he is over here and of course he was delighted to."

Matt Whitticase, of the Free Tibet Campaign, commended the prince for his stand, saying: "Prince Charles has always been a steadfast supporter of Tibet, not just as a friend of the Dalai Lama but through his work for political prisoners."