His Holiness the Dalai Lama's Remarks on Retirement - March 19th, 2011

After coming into exile, I have made sincere efforts to establish a democratic system of governance in the last more than 30 years. The Tibetans in exile say “our democracy is a gift from His Holiness the Dalai Lama.” Ten years ago, the system of electing Kalon Tripa through democratic elections was introduced rather than nomination of the candidate by the Dalai Lama, which was not correct. Since the direct election of Kalon Tripa, the system of the institution of Gaden Phodrang of the Dalai Lama as both the spiritual and temporal authority has ended. Since then I described myself as in semi-retired position. 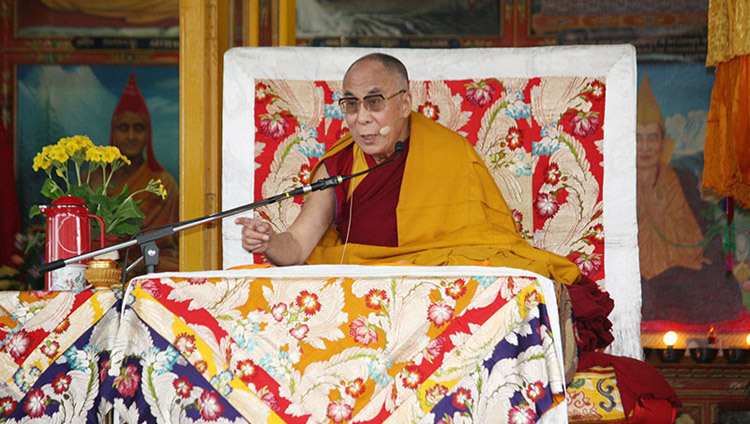 Since then ten years have passed and the day will come for us when we have to follow a meaningful democratic system. The rule by kings and religious figures is outdated. We have to follow the trend of the free world which is that of democracy. For example in India, besides its huge population and diverse languages, religions and culture, but on the whole it remains very stable. This is because of democracy, the rule of law, free expression and media.  To the contrary, China under the authoritarian rule is always facing problems. It was mentioned in a recent Chinese government's document that it is allocating more budget to maintain internal stability than national defense. This shows that they have more enemies inside rather than outside, which is a matter of shame.

The government of the People's Republic (of China) is meant to work for the people's welfare. So fulfilling the people's aspirations must come through democratic elections. If the leaders are selected through elections, it would be a matter of real pride. But to hold power at the barrel of the gun rather than through elections is immoral and outdated as well. So the system of one-man rule is not good. Therefore, it is not at all good if the Dalai Lama keeps on holding ultimate power. The Dalai Lama as the spiritual and temporal authority of Tibet did not begin during the period of the first four Dalai Lamas. It started during the time of the fifth Dalai Lama under different circumstances and the influence of the Mongol chieftain Gushri Khan. The system has brought many benefits since then. But now as we are in the 21st century, sooner or later the time for change is imminent. But if the change comes under the pressure of another person then it will be a disgrace to the former Dalai Lamas. Since the fifth Dalai Lama, Ngawang Lobsang Gyatso, the Dalai Lamas have assumed both spiritual and temporal rule over Tibet. As I am the fourteenth in line of that institution, it is most appropriate if I on own initiative, happily and with pride, end the dual authority of the Dalai Lama. Nobody except me can make this decision and I have made the final decision. The leadership democratically elected by the Tibetan people should take over the complete political responsibilities of Tibet. Some kind of a vestige of the dual system will remain if I am vested with the political authority in the Charter. This should change and now seems to be the time to do it.

I can talk a little about the great deal of accomplishments that I have made for the Tibetan cause, as the Tibetan people both in and outside Tibet put faith and trust in me and there are also many people around the world who consider the Dalai Lama as someone they recognise, trust and love.  So now is the right time to end the dual system of governance established during the fifth Dalai Lama and retain the kind of unanimity and recognition gained by the first four Dalai Lamas in the spiritual domain. Particularly, the third Dalai Lama received the honorific title of an ecumenical master with yellow hat. So like them I will continue to take spiritual responsibilities for the remaining part of my life.

Personally, I have been working for the promotion of moral values and religious harmony in the world. These are proving quite beneficial. Moreover, I receive many invitations from different schools and universities around the world. They are not asking me to come to preach on Buddhism as such, but to teach how to promote inner happiness and Buddhist science to which many people take interest and love to listen. So when the present Dalai Lama is in such a position, it would be a matter of great pride if the 400-year-old rule of Dalai Lama as both the spiritual and temporal authority gracefully comes to an end. No one else except me can decide to end something started by the fifth Dalai Lama and my decision is final.

Recently, I received telephone calls from Tibetans inside Tibet saying they are extremely worried and feel abandoned as I am retiring. There is absolutely no need to worry. After taking retirement, I will continue to lead Tibet in spiritual affairs like the first four Dalai Lamas. Like the second Dalai Lama Gedun Gyatso, who founded the Gaden Phodrang institution and led Tibet spiritually with unanimous mandate, I will also retain that kind of spiritual leadership for the rest of my life. Perhaps if I bring no disgrace on the people and make good efforts in the future, I will continue to lead spiritually.

If such a Dalai Lama with an unanimous mandate to lead spiritual affairs abdicates the political authority, it will help sustain our exile administration and make it more progressive and robust. Similarly, the international community, who support the Tibetan cause, will commend the Dalai Lama's sincerity for the complete democratization of the Tibetan polity. It will raise our prestige in the world. On the hand other, it will fully expose the falsehood and lies of the Chinese government that there is no Tibet problem except the issue of the Dalai Lama's personal rights. The Tibetan people inside Tibet should not feel discouraged because I have made this remarkable decision by taking in consideration the benefit of the Tibetan people in the long run. The Tibetan administration in exile will be more stable and progressive. Contrary to the system of the Chinese Communist's authoritarian rule in Tibet, our small community in exile has been able to establish a complete modern democratic system.

In the long run this decision will make our exile administration stronger and efficient. Where else, if we compare our community in exile with the authoritarian communist regime in China, we have actually become a modernized society. This is our glorious achievement. Tibetans inside Tibet should be proud of this achievement. You all should understand and realise that I am not discouraged and I have not given up on the cause of Tibet.

Just yesterday, I met a Chinese scholar who told me that he was conducting a research on the Tibetan electoral process and had also come here five years ago. He told me that this time around, Tibetans were very actively participating and fully utilizing their democratic rights. He praised the advancements that the Tibetan democratic system had made. So these developments represent our growing political awareness and the strides that we have taken in our democratic process. And so the decision to devolve my power is also a part of advancing democratization process.

Those of you from Tibet when you return and if there are people to whom you can confide then tell this to them. This may also be broadcast on the radio as well. I have made this decision to retire after giving thorough thought over it for years and years and for the ultimate benefit of Tibet. There is no reason at all for you to be disheartened.

And then, regarding the future reincarnations, of course there is no hurry as of now. But after 20 or 30 years when I am near my end, then depending mainly on the wishes of the Tibetan people and also the people of the Himalayan regions and other Buddhists who are connected to the Dalai Lamas, if they so wish then the 15th, 16th and 17th Dalai Lamas and so forth, will come. So Ganden Phodrang will still remain intact. Political changes are bound to come but such a move will lend stability. Ganden Phodrang reverting back to its role and responsibility as being the spiritual head as during the times of the second, third and fourth Dalai Lamas have great significance and reason.

In the long run, if you think about it, then this change and decision I am making has great benefits for the Tibetans. In my letter to the Tibetan Parliament, I suggested that the title of Ganden Phodrang Shung will have to be changed. Ganden Phodrang will remain but it will not take any political responsibilities as we are now a democratic establishment.

The Tibetan word ‘shung’ may not necessarily translate in English as government. We don’t use the English word ‘government’ as such to describe our exile administration. At one instance during a press conference in Delhi, Rinpoche was also there, a journalist addressed Samdhong Rinpoche as the Prime Minister of the exile government. So, I instantly clarified that we don’t use these titles like Tibetan ‘Prime Minister’ or the Tibetan ‘Government-in-exile’. We call our administration the Central Tibetan Administration. Of course there are Tibetans in exile and we need an organization to look after them. This is the direct responsibility of the administration. Generally, the few of us in exile, being Tibetans, have the responsibility to articulate the aspirations of the Tibetans inside Tibet and to tell the world of the real situation inside Tibet.  We have never called our administration the Tibetan exile government. Calling the administration the Ganden Phodrang Shung is another case in matter. So, the precise title is the Central Tibetan Administration whose leaders are all democratically elected.

To be true, this provides the leaders of the Tibetan autonomous areas in Tibet a reason to think. Those of us in exile, though remaining as refugees in alien countries, have carried out a genuine electoral process. If those leaders are really capable and confident, then let the Tibetans inside Tibet democratically elect their own leaders. Whatever the case maybe in the rest of China, if we could emulate the exile system in Tibet itself then it would be very good.

So, the many political changes that I have made are based on sound reasons and of immediate and ultimate benefit for all of us. In fact, these changes will make our administration more stable and excel its development. So, there is no reason to get disheartened.

This is what I wish to explain to you.

--Translated from His Holiness the Dalai Lama's remarks in Tibetan made during a public teaching at Tsulagkhang, the main temple, in Dharamsala on the morning of 19 March 2011.