His Holiness the 14th Dalai Lama, Tenzin Gyatso, describes himself as a simple Buddhist monk. He is the spiritual leader of Tibet. He was born on 6 July 1935, to a farming family, in a small hamlet located in Taktser, Amdo, northeastern Tibet. At the age of two, the child, then named Lhamo Dhondup, was recognized as the reincarnation of the previous 13th Dalai Lama, Thubten Gyatso.

The Dalai Lamas are believed to be manifestations of Avalokiteshvara or Chenrezig, the Bodhisattva of Compassion and the patron saint of Tibet. Bodhisattvas are realized beings inspired by a wish to attain Buddhahood for the benefit of all sentient beings, who have vowed to be reborn in the world to help humanity.

Education in Tibet
His Holiness began his monastic education at the age of six. The curriculum, derived from the Nalanda tradition, consisted of five major and five minor subjects. The major subjects included logic, fine arts, Sanskrit grammar, and medicine, but the greatest emphasis was given to Buddhist philosophy which was further divided into a further five categories: Prajnaparamita, the perfection of wisdom; Madhyamika, the philosophy of the middle Way; Vinaya, the canon of monastic discipline; Abidharma, metaphysics; and Pramana, logic and epistemology. The five minor subjects included poetry, drama, astrology, composition and synonyms. 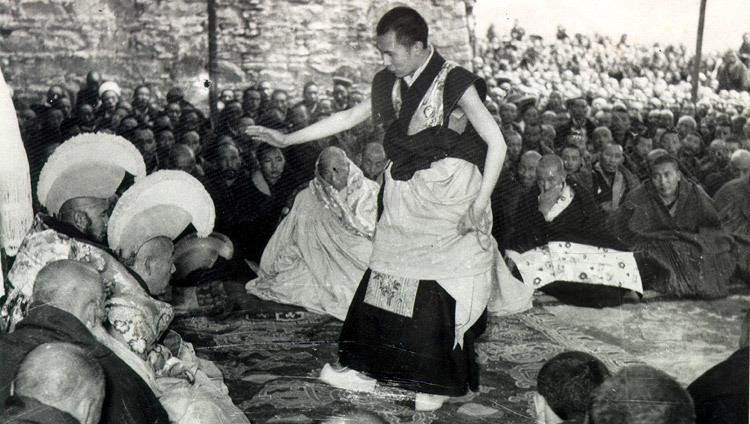 At 23, His Holiness sat for his final examination in Lhasa’s Jokhang Temple, during the annual Great Prayer Festival (Monlam Chenmo) in 1959. He passed with honors and was awarded the Geshe Lharampa degree, equivalent to the highest doctorate in Buddhist philosophy.

Leadership Responsibilities
In 1950, after China's invasion of Tibet, His Holiness was called upon to assume full political power. In 1954, he went to Beijing and met with Mao Zedong and other Chinese leaders, including Deng Xiaoping and Chou Enlai. Finally, in 1959, following the brutal suppression of the Tibetan national uprising in Lhasa by Chinese troops, His Holiness was forced to escape into exile. Since then he has been living in Dharamsala, northern India. 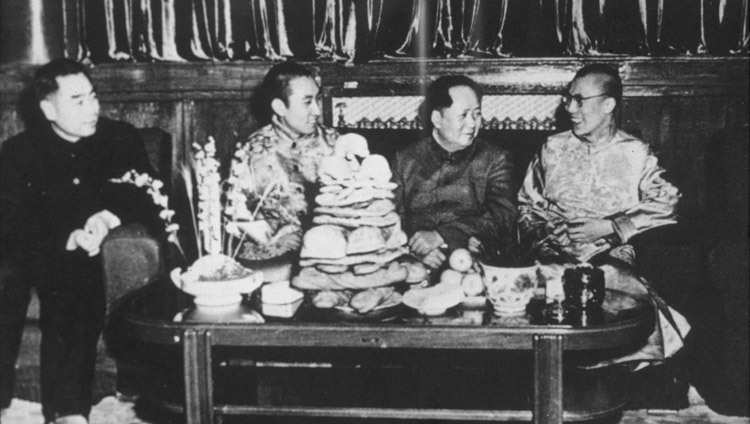 In exile, the Central Tibetan Administration led by His Holiness appealed to the United Nations to consider the question of Tibet. The General Assembly adopted three resolutions on Tibet in 1959, 1961 and 1965.

Democratization Process
In 1963, His Holiness presented a draft democratic constitution for Tibet , followed by a number of reforms to democratize the Tibetan administration. The new democratic constitution was named "The Charter of Tibetans in Exile". The charter enshrines freedom of speech, belief, assembly and movement. It also provides detailed guidelines on the functioning of the Tibetan Administration with respect to Tibetans living in exile.

In 1992, the Central Tibetan Administration published guidelines for the constitution of a future, free Tibet. It proposed that when Tibet becomes free the first task will be to set up an interim government whose immediate responsibility will be to elect a constitutional assembly to frame and adopt a democratic constitution for Tibet. His Holiness has made clear his hopes that a future Tibet, comprising the three traditional provinces of U-Tsang, Amdo and Kham, will be federal and democratic.

In May 1990, as a result of His Holiness’s reforms the Tibetan administration in exile was fully democratized. The Tibetan Cabinet (Kashag), which until then had been appointed by His Holiness, was dissolved along with the Tenth Assembly of the Tibetan People's Deputies (the Tibetan parliament in exile). In the same year, exiled Tibetans living in India and more than 33 other countries elected 46 members to an expanded Eleventh Tibetan Assembly on a one-person one-vote basis. That Assembly then elected the members of a new cabinet.

In September 2001, in a further step towards democratization the Tibetan electorate directly elected the Kalon Tripa, the Chairman of the Cabinet. The Kalon Tripa appointed his own cabinet who then had to be approved by the Tibetan Assembly. This was the first time in Tibet's long history, that the people had elected their political leaders. Since the direct election of the Kalon Tripa, the custom by which the Dalai Lamas, through the institution of the Ganden Phodrang, have held temporal as well as spiritual authority in Tibet, has come to an end. Since 2011, when he devolved his political authority to the elected leadership, His Holiness has described himself as retired.

Peace Initiatives
On 21 September 1987 in an address to members of the United States Congress in Washington, DC, His Holiness proposed a Five-Point Peace Plan for Tibet as a first step towards a peaceful solution of the worsening situation in Tibet. The five points of the plan were as follows: 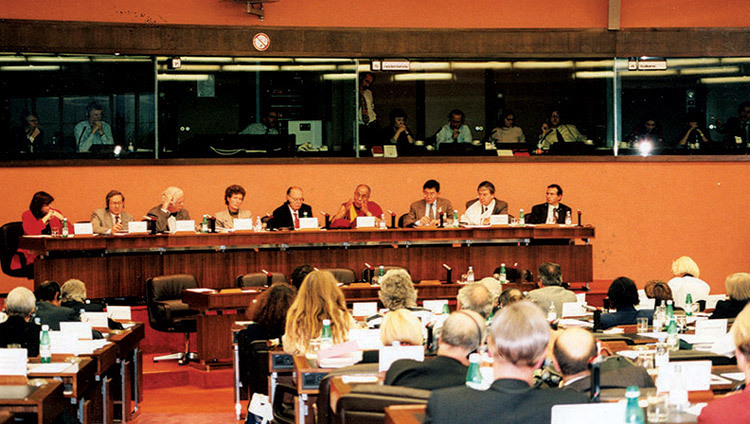 On 15 June 1988, in an address to members of the European Parliament in Strasbourg, His Holiness further elaborated on the last point of the Five-Point Peace Plan. He proposed talks between the Chinese and Tibetans leading to a self-governing democratic political entity for all three provinces of Tibet. This entity would be in association with the People's Republic of China and the Chinese Government would continue to be responsible for Tibet's foreign policy and defence.

Universal Recognition
His Holiness the Dalai Lama is a man of peace. In 1989 he was awarded the Nobel Peace Prize for his non-violent struggle for the liberation of Tibet. He has consistently advocated policies of non-violence, even in the face of extreme aggression. He also became the first Nobel Laureate to be recognized for his concern for global environmental problems.

His Holiness has travelled to more than 67 countries spanning 6 continents. He has received over 150 awards, honorary doctorates, prizes, etc., in recognition of his message of peace, non-violence, inter-religious understanding, universal responsibility and compassion.  He has also authored or co-authored more than 110 books.

His Holiness has held discussions with heads of different religions and participated in many events promoting inter-religious harmony and understanding.

Since the mid-1980s, His Holiness has engaged in a dialogue with modern scientists, mainly in the fields of psychology, neurobiology, quantum physics and cosmology. This has led to a historic collaboration between Buddhist monks and world-renowned scientists in trying to help individuals achieve peace of mind. It has also resulted in the addition of modern science to the traditional curriculum of Tibetan monastic institutions re-established in exile..

Political Retirement
On 14 March 2011 His Holiness wrote to the Assembly of Tibetan People's Deputies (Tibetan Parliament-in-exile) requesting it to relieve him of his temporal authority, since according to the Charter of the Tibetans in Exile, he was technically still the head of state.  He announced that he was ending the custom by which the Dalai Lamas had wielded spiritual and political authority in Tibet. He intended, he made clear, to resume the status of the first four Dalai Lamas in concerning himself only with spiritual affairs. He confirmed that the democratically elected leadership would assume complete formal responsibility for Tibetan political affairs. The formal office and household of the Dalai Lamas, the Gaden Phodrang, would henceforth only fulfil that function. 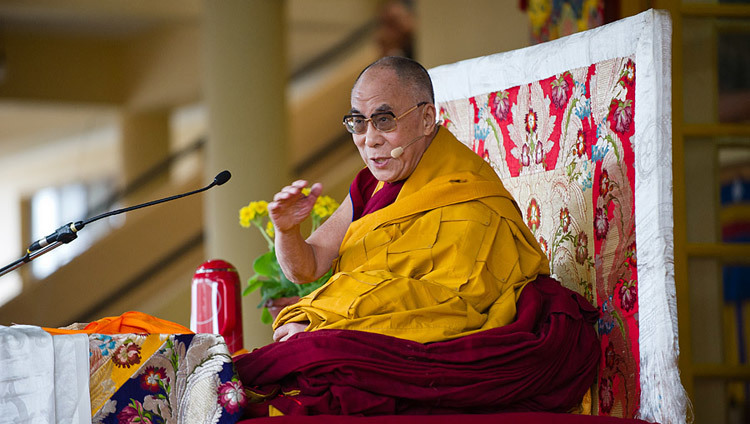 On 29 May 2011 His Holiness signed the document formally transferring his temporal authority to the democratically elected leader. In so doing he formally put an end to the 368-year old tradition of the Dalai Lamas functioning as both the spiritual and temporal head of Tibet.

The Future
As far back as 1969, His Holiness made clear that whether or not a reincarnation of the Dalai Lama should be recognised was a decision for the Tibetan people, the Mongolians and people of the Himalayan regions to make.  However, in the absence of clear guidelines, there was a clear risk that, should the concerned public express a strong wish to recognise a future Dalai Lama, vested interests could exploit the situation for political ends. Therefore, on 24 September 2011, clear guidelines for the recognition of the next Dalai Lama were published, leaving no room for doubt or deception.

His Holiness has declared that when he is about ninety years old he will consult leading Lamas of Tibet’s Buddhist traditions, the Tibetan public, and other concerned people with an interest in Tibetan Buddhism, and assess whether the institution of the Dalai Lama should continue after him. His statement also explored the different ways in which the recognition of a successor could be done. If it is decided that  a Fifteenth Dalai Lama should be recognized, responsibility for doing so will rest primarily on the concerned officers of the Dalai Lama’s Gaden Phodrang Trust. They should consult the various heads of the Tibetan Buddhist traditions and the reliable oath-bound Dharma Protectors who are linked inseparably to the lineage of the Dalai Lamas. They should seek advice and direction from these concerned parties and carry out the procedures of search and recognition in accordance with their instruction. His Holiness has stated that he will leave clear written instructions about this. He further warned that apart from a reincarnation recognized through such legitimate methods, no recognition or acceptance should be given to a candidate chosen for political ends by anyone, including agents of the People’s Republic of China.

His Holiness the Dalai Lama will give a talk on Well-being and Resilience follow...

His Holiness the Dalai Lama will give a talk on Buddhism and Science for Mongoli...