A Day of Buddhist Teachings in the Mongolian Capital November 20, 2016

Ulaanbaatar, Mongolia – His Holiness the Dalai Lama’s first engagement of the day was to meet with the Indian Ambassador to Mongolia. Many Mongolians lined the lobby seeking His Holiness’s blessings as he left the Guest House. Stepping out into the freezing morning, His Holiness encountered a temperature of -40̊C as a result of the record-breaking cold wave that has descended on Ulaanbaatar. 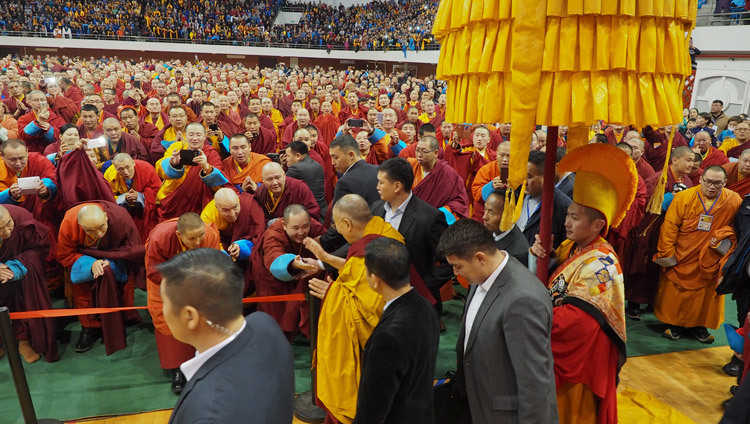 As His Holiness arrived at the Buyant Uhaa Sports Complex, traditionally dressed monks welcomed him playing cymbals, trumpets and long-horns. When he entered the hall, the audience waved their scarves in a gesture of respect. The 10,000 seat hall was filled beyond capacity; hundreds of people sitting in the aisles or wherever there was space. Consequently, more than 12,000 were lucky to be able to hear and see His Holiness teach. Several thousand others gathered outside, unable to enter the hall.

While His Holiness performed the preparatory rituals for the Permission of Je Tsongkhapa Embodying Manjushri, Avalokiteshvara and Vajrapani he was going to give, the audience recited the ‘Heart Sutra’ dharani.

As he began to give a general introduction to Buddhism His Holiness declared that rather than reciting prayers or performing rituals, whenever he has the opportunity he always prefers to teach. As Matrceta’s verse says: 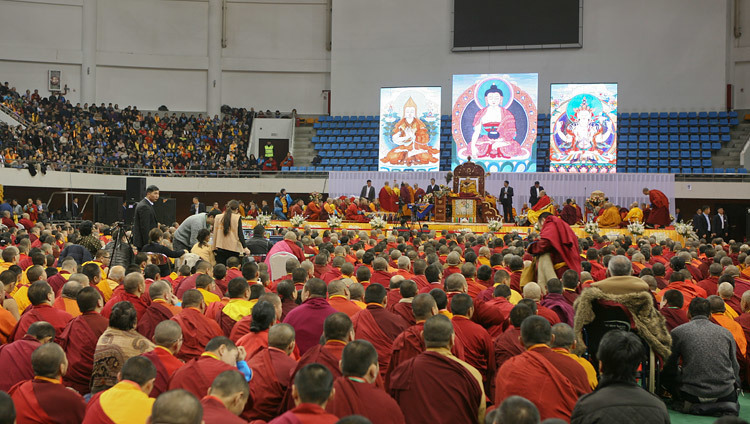 “Accordingly,” His Holiness continued, “the Buddha taught the two truths—conventional and ultimate—to help beings free themselves from the cycle of existence. He did not say that we could achieve liberation merely by seeking blessings, he stressed the need to develop knowledge and wisdom. That is the way to put what he taught into practice. Therefore, what we need to do is study the content of the more than 300 volumes of the Kangyur and Tengyur in order that our faith in the teaching of the Buddha be based on sound understanding.

“The teaching of emptiness of intrinsic existence is comparable to the assertion in quantum physics that nothing has any objective existence. Merely cultivating faith in the teaching of the Buddha is not enough, we must use critical analysis to properly understand what he taught.”

His Holiness advised those who belong to Mongolian monasteries and nunneries to develop a study program similar to the curriculum being followed in the Tibetan Monastic Universities in south India. He told them he was confident they could do this, since, unlike Tibetans in Tibet, Mongolians now enjoy the freedom to order their own affairs.

His Holiness concluded the morning session by giving the Permission of a Guru Yoga practice belonging to the Geluk tradition, focussing on Je Tsongkhapa. He mentioned having received it from Takdak Rinpoche. At the appropriate point in the proceedings, he also led the audience in generating the awakening mind of Bodhichitta and gave the Bodhisattva vows. 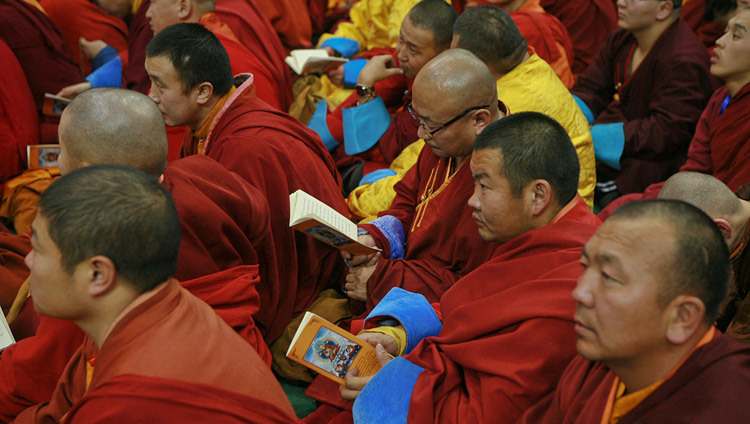 After a late lunch, His Holiness returned to the hall where most of the audience had remained in their seats. He taught Tsongkhapa’s ‘In Praise of Dependent Arising’ and ‘Three Principal Aspects of the Path’, explaining that the former provided an introduction to the teaching of the Buddha, while the latter can be viewed as a guide to how to practise.

“The concept of dependent arising” His Holiness explained, “is unique to the teaching of the Buddha. It is not found in any other religious tradition. It was for his teaching this that both Nagarjuna and Tsongkhapa praised the Buddha, not for any physical qualities he possessed.”

Tomorrow, His Holiness will take part in a conference on Buddhism and Science being organized by the Tritiya Dharma Chakra Foundation.