Bodhgaya, Bihar, India - After lunch today, His Holiness the Dalai Lama drove to the Kalachakra teaching ground to meet approximately 2000 students from 25 different schools in the vicinity of Bodhgaya. The occasion was organized by the Inter-religious Friends Association of Bodhgaya. His Holiness was welcomed on arrival by Ven Ratneswar Chakma and Father Lawrence Ujjwal. As he walked to the stage, he was invited to review the results of a student competition to portray him and greet the winners. 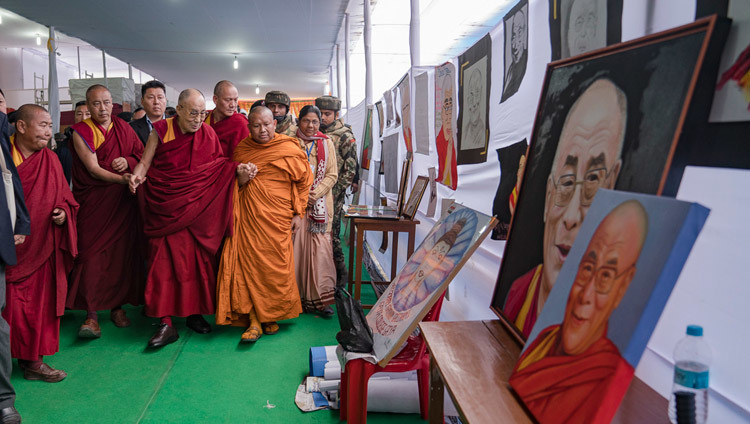 Once His Holiness and other guests had taken their seats, moderator Kiran Lama invited Ven Ratneswar Chakma, Dr Mohammed Ishtiaq - Vice-Chancellor of Magadh University and Dr M Shamsul Islam - Principal of Gaya College, to welcome, felicitate and introduce His Holiness. Father Lawrence encouraged the students to pay attention and take note of what His Holiness said in order to be able to take part in a subsequent essay competition.

“Dear young brothers and sisters, and, of course, elder brothers and sisters,” His Holiness began, “whenever I speak in public I prefer to be informal. Formality seems to me only to create barriers between people. It’s a great honour for me to be here talking to you young people in this place that many of us consider sacred.

“As human beings we are all the same. The way we are born and the way we die is the same. We are physically, mentally and emotionally the same. Differences between us of nationality, belief, colour or social standing are only of secondary importance. We would do well to be more like children who play happily and affectionately together without any concern for such distinctions.

“Too many problems we face today are of our own making. Many of them arise because we pay too much attention to what differentiates us rather remembering the oneness of humanity—that we all belong to one human family.”

His Holiness remarked that because time is always moving on the past is gone. The 20th century is over and we can’t change what happened no matter how we feel about it. However, we can shape the future. 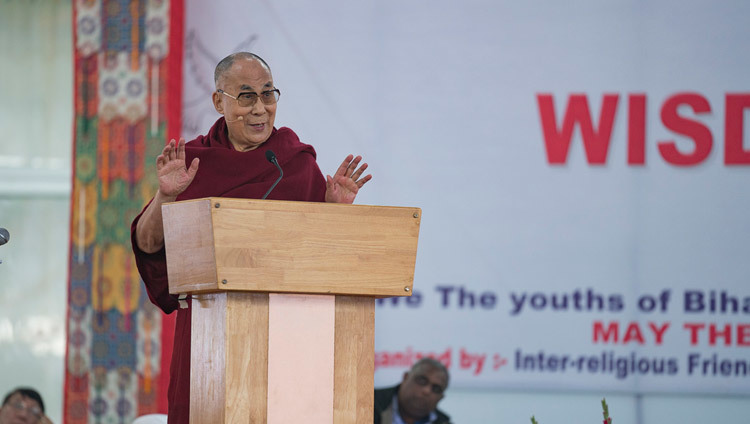 “People of my age belong to the 20th century. Our time is gone. But you are the generation of the 21st century. You have a responsibility to create a better world. I believe you will see a brighter future, but it will take time and effort to make the world a more peaceful, more compassionate place.

“World peace can only be based on inner peace. If we ask what destroys our inner peace, it’s not weapons and external threats, but our own inner flaws like anger. When you meet someone you don’t like, or someone says something unpleasant to you, it’s your own response that disturbs your inner peace. What’s more, constant fear and anger undermine our immune system. This is one of the reasons why love and compassion are important, because they strengthen us. This is a source of hope.”

His Holiness observed that scientists are producing findings to show that basic human nature is positive and compassionate, but unfortunately modern education is inadequate when it comes to developing it. Too little attention is paid to inner values. He noted that since many people in highly developed countries remain unhappy, material development alone clearly fails to bring inner peace.

While remarking that India is largely a religious minded country, His Holiness expressed surprise that corruption is so widespread. He wondered, jokingly, if every morning when people salute and make offerings before Shiva, Ganesh or Sarasvati, for example, they are not actually praying, ‘May my corrupt activities succeed!’ He suggested this indicates a need for stricter moral principles.

“Compassion is the basis of our survival, not just a religious matter. Our very life depends on the affection of others, so it’s in our interest to take their concerns into account. Therefore, I urge those of you who belong to the generation of the 21st century to think more about inner values and cultivate compassion in your own lives. 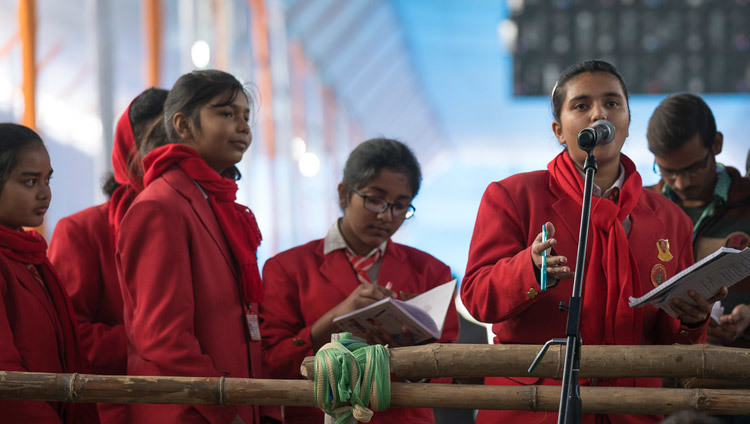 “Friendship depends on trust and trust depends on having a strong sense of concern for the welfare of others. Be honest, truthful and warm-hearted. Make compassion the basis of your determination. Think of what the future can be, not what happened in the past.”

In his answers to the students’ questions, His Holiness talked about a three-fold approach to learning which begins with reading or listening to instructions, continues when you think about what you’ve read or heard and finally making yourself really familiar with it in meditation. After that it’s important to put what you’ve learned into effect, keeping in mind that inner change takes time and effort, just as a plant takes time to grow.

To deal with anger, His Holiness commended cultivating a sense of emotional hygiene based on the ancient Indian understanding of the workings of the mind and emotions. He also suggested that the book he is going to explain next week, the ‘Guide to the Bodhisattva’s Way of Life’ is thorough in explaining how to tackle anger and self-centredness.

He added that ahimsa, while being based on compassion is in fact related to action. It comes into play when you have the opportunity and drive to strike someone, but you restrain yourself. He said that if you respond to others’ anger with anger, or to their violence with violence, there’ll be no end to it. The best solution to conflict is to smile and engage in dialogue.

As the meeting came to an end, Divisional Commissioner, Mr Lian Kunga, voiced a qualm that as a Christian he believed you could only go to heaven if you had faith in Jesus Christ. His Holiness replied that as far as he’s concerned such faith is powerful and very helpful. He conceded that on a personal level having a sense of there being only one truth and one religion is appropriate, but in the context of the world we live in there are clearly several truths and more than one religion.

Father Lawrence gave a short formal expression of thanks. 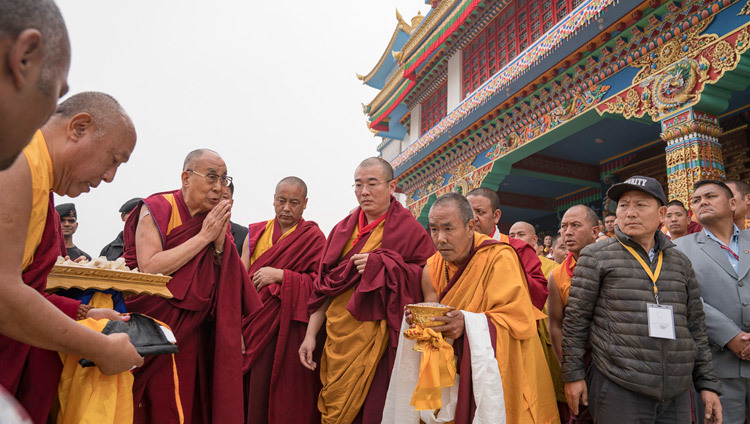 From the Kalachakra Ground, His Holiness drove to Palyul Thupten Choekhor Dargyeling a new Nyingma monastery that has been constructed in fulfilment of one of the wishes of the late Penor Rinpoche. His Holiness was received by Ven Tsering Phuntsok, former Kalon, and Gyangkhang Rinpoche who escorted him into the ornate new temple.

In his remarks His Holiness mentioned Penor Rinpoche’s great dedication to the preservation of the Nyingma tradition, particularly in terms of study. He said he had faced some opposition when he introduced debate on top of the study of the 13 great books, but the end result was that among the various Nyingma monasteries in India, Nepal and Bhutan the students of Namdroling were the most learned. They include nuns as well as monks. Quoting Vasubandhu, who referred to the doctrine and realization of the Dharma, His Holiness said they are preserved through study and practice. He recommended studying the Three Collections of Scripture and putting into practice the Three Higher Trainings.

His Holiness will begin preparations for the Kalachakra Empowerment the day after tomorrow.