Milan, Italy - The streets of Milan were empty and dark this morning as His Holiness the Dalai Lama drove out to the Rho Fiera Milano hall where he was to start rituals in preparation for the Avalokiteshvara empowerment he was going to give. The hall was still empty as he took his seat facing the ornate mandala pavilion, unwrapped the text and began. As the audience began to enter they were invited to sit quietly and join in reciting Om mani padme hung. 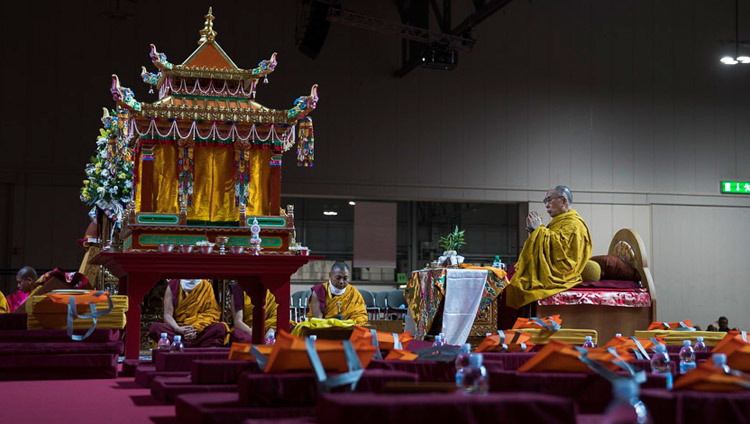 Once His Holiness had completed his preparations and taken a short break, he climbed onto the traditional high throne and asked if anyone had any questions to put to him. The first was about what to say to people caught up in waging war. His Holiness replied that it is very difficult to communicate with people whose emotions are inflamed. There is no room to reason with them. That’s why it’s so important to pursue peace, harmony and compassion before violent conflict breaks out.

To a question about what we can do about climate change His Holiness said he believed it is possible at least slow it down if we really make an effort to take the necessary steps together. He cited evidence that since appropriate measures were adopted to reduce damage to the ozone layer, inhibiting HFC gases and so forth, it has recovered significantly.

To begin the morning’s teachings the ‘Heart Sutra’ was recited in Italian. His Holiness asked that everyone note what it says towards the end—“All the Buddhas who perfectly reside in the three times, relying upon the perfection of wisdom, become manifest and complete Buddhas in the state of unsurpassed, perfect and complete enlightenment.” He emphasised that it is a clear and profound understanding of emptiness that arises in the form of a deity in the practice of tantra.

In preparing the disciples for the empowerment of 1000 Arm Avalokiteshvara in the tradition coming from Bhikshuni Lakshmi he led them through ceremonies for taking the layperson’s vows, for generating the aspiration for bodhichitta and then the Bodhisattva vow. The process culminated in his granting the actual empowerment. After lunch His Holiness returned to the stage. Before an audience of 12000 cheering people, the Mayor of Rho, Pietro Romano, conferred the freedom of that city on him. Richard Gere was called upon to introduce His Holiness.

“I’ve been here listening to His Holiness’s teachings on compassion, love and acceptance. Wherever he goes he creates an atmosphere of inclusiveness. He makes everyone feel welcome. Thinking about this reminded me of a verse from the Persian poet Rumi:

‘Come, come, whoever you are. Wanderer, worshipper, lover of leaving. It doesn't matter. Ours is not a caravan of despair. Come, even if you have broken your vows a thousand times. Come, yet again, come, come.’”

Stepping forward to the podium, flanked by his Italian and English interpreters, His Holiness began his talk:

“Dear brothers and sisters, I’m extremely happy to be able to be with you. We are all human beings. We may have slightly different faces but otherwise we are physically, mentally and emotionally the same. We all want to live a happy life, but we don’t always know how it can be done. In a materialistic society we look for joy in material goals and yet they don’t seem to bring complete satisfaction. I meet a lot of affluent people who are also full of stress and anxiety. They need to pay more attention to inner values. 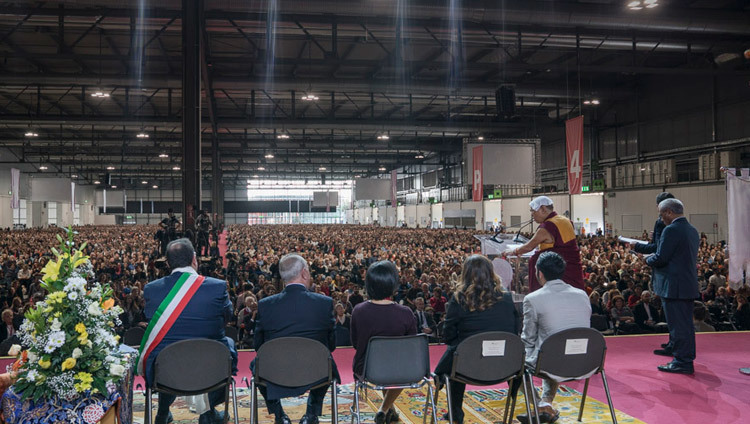 “I too could be subject to doubt, worry and anger, but I’ve learned that peace of mind is not just a matter of dullness, but of being alert and using my intelligence to the full. If we only look at problems we face close up they seem very grave, but looked at from different angles our attitude becomes more realistic. The mind remains calm, which we need if we’re going to be able to exercise our intelligence.

“When I was growing up I was enveloped in formality. When I went to China in 1954-55 and to India in 1956, formality prompted me to feel nervous. After I became a refugee, however, I left all that formality behind and feel much freer for it.

“On a more serious note, while we are enjoying being together here in peace and contentment, right now in other parts of the world people filled with fear and anger are killing each other. Too often violence arises because of our focus on secondary differences between us. We allow ourselves to see others in terms of ‘us’ and ‘them’. But, since we are all equally human beings, we have to promote a greater sense of the oneness of all human beings. On that basis we can solve whatever problems we face. We can enter into meaningful dialogue and resolve conflict in a human way.”

His Holiness outlined his three commitments. The first is to promoting human happiness and the oneness of humanity. The second concerns inter-religious harmony on the basis that, despite differences of approach, all religious traditions share common goals of love and compassion. 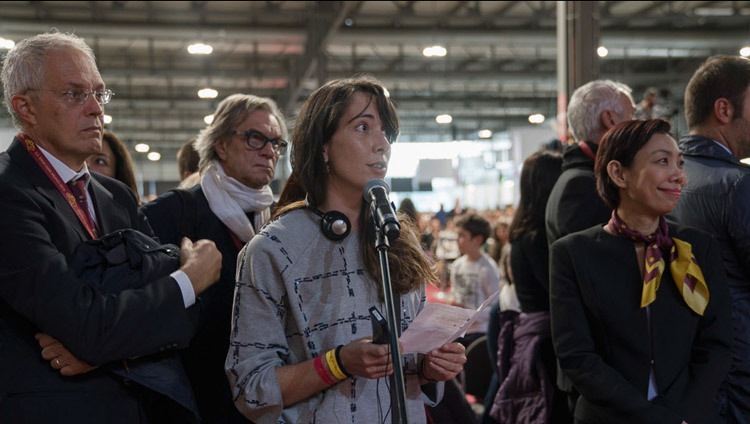 “These days,” he remarked, “whenever a terrorist attack takes place there is a tendency in the media to refer to it as an act of Muslim terrorists, or, as recently happened in Burma, Buddhist terrorists. This is a mistake because a terrorist is just a terrorist. By committing bloodshed these people cease to follow the appropriate Muslim or Buddhist conduct that would qualify them as proper Buddhists of Muslims.

“I have also been told that ‘jihad’ is not actually about harming others, but involves the inner conflict of tackling our own destructive emotions. As a simple Buddhist monk dealing with my negative emotions every day, you could say I’m engaging in continuous ‘jihad’.

“Thirdly, I am a Tibetan, but since I retired I no longer have any responsibility for political affairs. What’s more, I’ve put an end to any future political role for the Dalai Lamas. My concern now is with keeping Tibetan culture and identity alive. A culture of non-violence and peace, it’s worth preserving. Our rich tradition of Buddhism includes thorough knowledge of the workings of the mind and emotions that is of interest to scientists today. In addition I’m concerned to protect the fragile environment of Tibet, the source of many of Asia’s great rivers, on which more than a billion people depend.”

His Holiness concluded by thanking the ancient city of Rho for making him an honorary citizen. He invited questions from the audience which touched on topics as diverse as consciousness, dreams and how to raise happy children. He announced that he would be leaving to return to India early tomorrow morning. He urged his listeners to think about had been discussed and, if it seemed practical, to put it into effect. “Change in the world,” he said, “doesn’t take place because of government directives, but because of the actions individuals adopt.”