Mundgod, Karnataka, India - Today, His Holiness the Dalai Lama elected to walk the relatively short distance between Drepung Lachi and Drepung Loseling. He greeted well-wishers along the way, as well as offering comfort to beggars who also vied for his attention. In the spacious Loseling assembly hall approximately 3000 monks, 260 nuns—including the 20 new Geshe-mas—local Tibetan school-children, and people from abroad were gathered to attend the first international Emory Tibet Symposium. 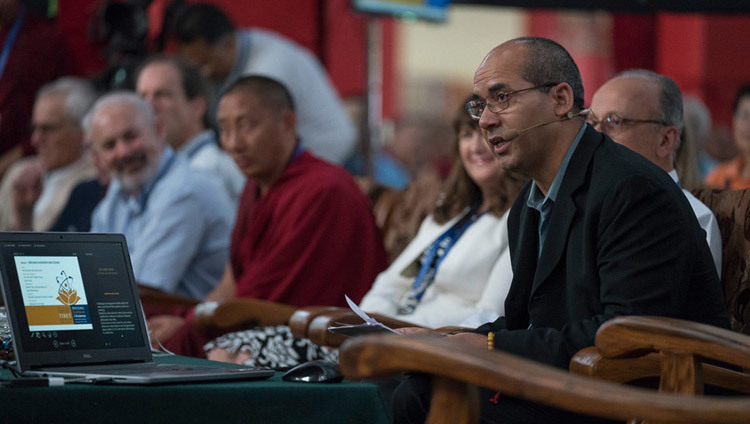 Geshe Lobsang Tenzin Negi introduced the occasion explaining that the Symposium is a partial fulfilment of His Holiness’s vision for dialogue between Buddhism and science. It was, he said, the natural development of relations that have grown up between Emory University, the Library of Tibetan Works & Archives and monks and nuns, mostly in South India. He announced that the present meeting happens to coincide with the 600th anniversary of Drepung Monastery, one of Tibet’s great seats of learning.

Negi invited the recently elevated 103rd Ganden Tripa, Jetsun Lobsang Tenzin, to address the gathering. Tri Rinpoche read out a formal Tibetan speech in which he paid respect to His Holiness and welcomed everyone to the meeting. He referred approvingly to the fact that training in science has become part of Tibetan monastic education and to the convening of this symposium here at Drepung.  He attributed both to His Holiness’s efforts and inspiration, offering his own words of encouragement.

Negi turned to His Holiness and asked if he had any remarks he would like to share. He began:

“Respected brothers and sisters, I’m very happy to be here and it’s a great honour for me to participate in these proceedings, particularly in this 600th year since the founding of Drepung Monastery.

“When we held the first meetings between scientists and Buddhist scholars organized by the Mind & Life Institute I suggested that Buddhism referred to a certain training aimed at achieving nirvana and Buddhahood. However, in 30 years of conversations, we have never talked about either of these goals, discussing our present reality instead. Consequently, I would prefer to refer to these discussions as between Buddhist science and modern science. 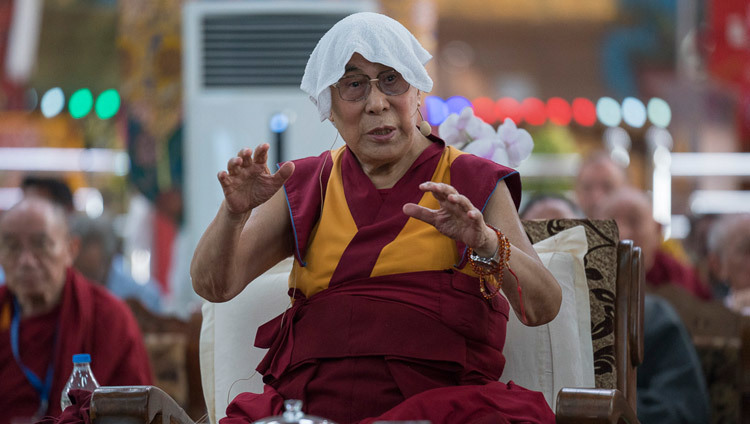 “So far, modern science has focussed on material things with little attention to the workings of the mind and emotions. And yet today many of the problems we face arise because of our disturbing emotions. I believe that by learning more about inner science and how to tackle our emotions we can ensure individuals, families and the wider community are happier and more at peace. When there are differences between us we need to enter into dialogue to resolve them and to do that we have to have respect for each other. As part of the process it will be helpful if science examines the mind and emotions from an academic point of view.”

Next, he spoke to the Tibetans in the audience in their own language. He pointed out that when the Buddha first taught, he explained the Four Noble Truths, the first of which concerns the existence of suffering. By revealing the truth, the reality of how things are, he was able to talk about the possibility of cessation.

Taking the wider scope of the Buddhist teachings into account, His Holiness declared that if we rely on logic there is no room for anything that contradicts empirical evidence. He touched on the emergence of the five elements and the existence of the ‘space particle’. He mentioned that the Buddhist account of the appearance and destruction of the universe and of time in terms of aeons accords with scientific speculation about the ‘big bang’.

He alluded to Buddhist descriptions of different levels of consciousness, how sensory consciousness is rough, consciousness in the dream state is subtler, in fainting it is subtler still and is most subtle at the time of death. This led him to refer to those cases of people whose bodies remain fresh after clinical death has taken place because the subtlest consciousness has, for the time being, remained. This is something we need to know more about and investigations are going on. 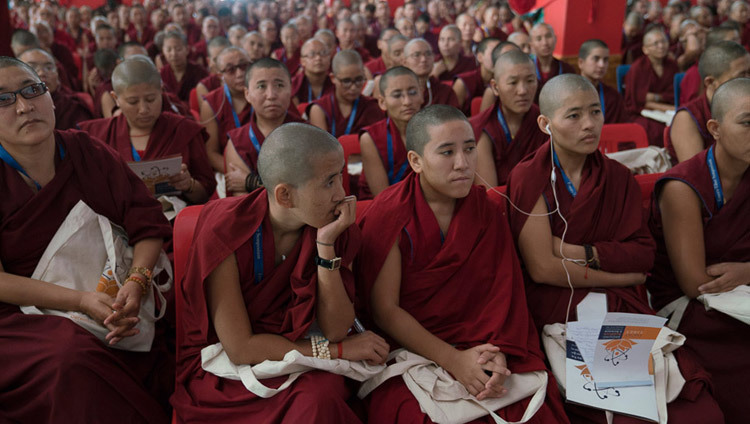 “The Nalanda tradition is based on reason and logic,” His Holiness said, “and it is on this basis that we are able to enter into discussions with scientists. The first purpose of this symposium is to enrich understanding on both sides. The second is to support the general promotion of secular ethics, or as I now refer to them in the West, where people are more wary of the word ‘secular’, universal values.

“The world faces all sorts of problems, many of them of our own making, so it is our responsibility to take steps to solve them ourselves. We need to adopt a realistic rather than a formal approach. There is no formality when we’re born and there’s none when we die—why waste time on it when we’re alive?”

Unable to participate in person, Robert A Paul made a presentation by video that was shown in the hall. He suggested that we are living in an ‘Axial Age’, a time of transformation when people must struggle with new and unprecedented conditions. He said an effort must be made to forge new ways of thinking, knowing and acting that build on the best in Buddhist science as well as modern science.

French philosopher, Michel Bitbol sought to show that philosophy could be a bridge between science and Buddhism, suggesting that it can clarify what science is. He quoted Francisco Varela’s view that the discovery of Buddhism would usher in a new renaissance, opening up our understanding of the world. He observed that science regards meditation in the way it would any other object, wanting to know how it works and what it can be used for. He suggested that science is overvalued in the West as a source of knowledge, but concluded that the Buddhist claim that subtle consciousness is beginningless is not incompatible with the scientific theory of evolution. 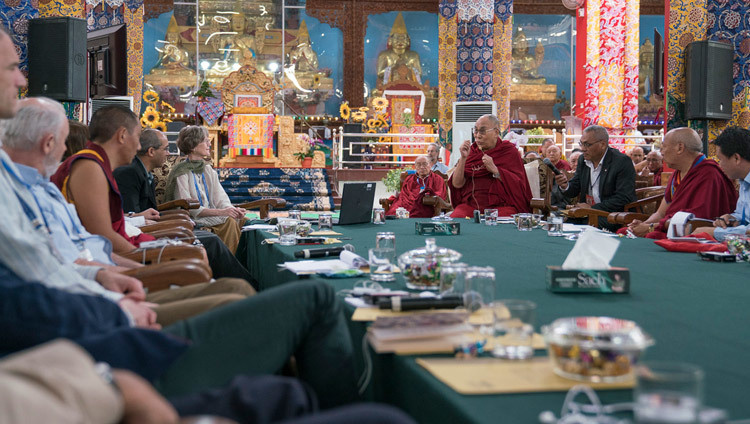 In her presentation, anthropologist Carol Worthman spoke of the comprehensive and sustainable science education program for Tibetan monastic institutions represented by the Emory Tibet Science Initiative (ETSI). She reported on capacity building with monks being trained to teach science before returning to their monasteries to become science leaders. They deal with questions such as: Matter—what is it? Life—how does it come about? Sentience—how does it occur? Knowledge—can we really know? She concluded that there are many potential benefits to be had from the exchange between Buddhist and modern science.

With His Holiness’s observation that in his experience scientists are generally remarkably open-minded the session broke for lunch, which he ate with the day’s presenters.

When the second session opened in the afternoon, John Durant asked ‘What is science?’ suggesting that to find out we should look at what scientists do rather than what they say. He addressed the powerful and influential myth of scientific certainty saying that it is easy to think scientific knowledge is beyond dispute. The questioning of Newton’s observations about gravity is an example. He also mentioned lichen, universally thought to consist of algae and fungus until the recent discovery that yeast is a third component.

He also challenged the myth of scientific method, pointing out that theory, prediction, experiment and observation have little relevance in optical astronomy or the study of fossils. He questioned the myth of the objective scientist and observed that scientific progress is achieved by a scientific community not an individual. 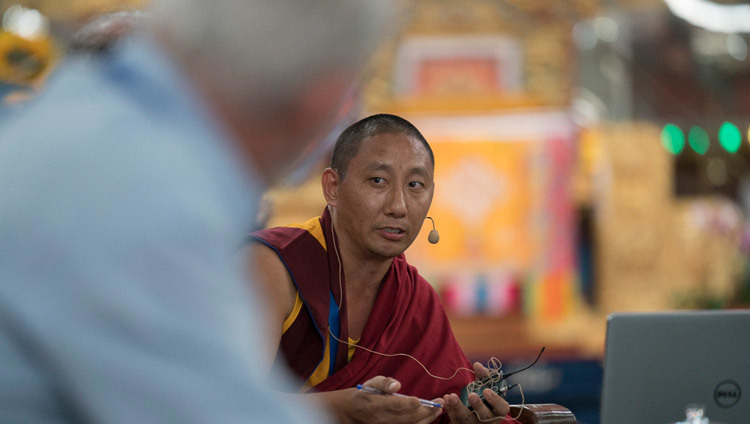 Sonam Choephel gave a compelling explanation of knowledge of valid cognition in Buddhism, which to overcome ignorance needs to be incontrovertible and certain. He mentioned three domains of knowledge: objects that are manifest, those that are slightly hidden and those that are extremely hidden.

Lobsang Gonpo, Julia Haas and Sonam Wangchuk continued to discuss ‘valid cognition’ during the panel discussion. Returning to implications of questioning scientific certainty, John Durant mentioned that there are those who say that the science regarding climate change is not certain, however, this cannot be taken to mean that it is all wrong.

Before leaving for the day, His Holiness thanked each of the presenters for their contribution and was especially appreciative of the way the monk scholars had demonstrated courage and ability in making their presentations in English. After leaving the hall, he rode back to Drepung Lachi in a car.