Mundgod, Karnataka, India - Before 8am it is still cool enough to walk comfortably from Drepung Lachi to Drepung Loseling, which His Holiness the Dalai Lama did once more today. He greeted Tibetans and Indians, local residents, pilgrims and beggars on the way, shaking hands with many of them to their evident pleasure and surprise.

On reaching Drepung Loseling, he gave an interview to Dr Sanjay Gupta, a physician and broadcaster, to be broadcast by CNN, which, like Emory University, is based in Atlanta, Georgia, USA. Dr Gupta, who is here to cover the Emory Tibet Symposium, began by asking His Holiness the importance of a genuine smile.

“There may be some other animals who have ways of expressing their warm feelings,” His Holiness replied, “but being able to smile seems to be unique to human beings. As social animals we need friends. Friendship is based on trust and trust grows when we show each other genuine affection. If you are honest, truthful and of service to others, no matter what else is going on you can feel self-confident.”

Asked why, if basic human nature is compassionate, we don’t see more of it in the world, His Holiness replied that when children are five or six years old they are innocent and open-hearted. They don’t care about nationality, faith, race and so forth. However, as they grow up in a materialistic society, their basic human values, such as compassion and concern for others, tend to be neglected and become dormant. Gradually they learn to cheat and bully others and in extreme cases kill them.

“In the USA,” His Holiness continued, “we see growing numbers of cities taking to calling themselves ‘city of kindness’ or ‘city of compassion’ and developing programs to encourage these qualities in children. 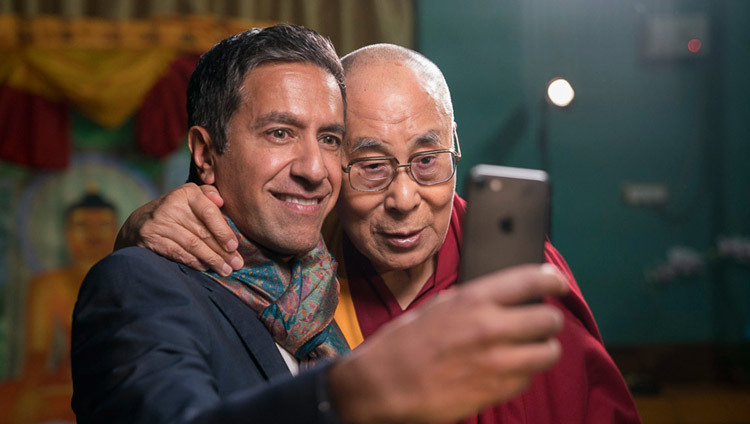 “In India and the US too we are working on a draft curriculum to introduce universal values into the mainstream education system. We plan to run it as a pilot project in some schools and if there are positive results we will make it more widely available.”

Gupta wondered what His Holiness might want people to know about the Dalai Lama that they don’t already know. He told him that he considers himself a simple Buddhist monk, who is just one among 7 billion human beings alive today. He denied that his role puts him under any pressure, but explained how he has for many years cultivated analytical meditation examining the drawbacks of giving in to anger and attachment and how such negative emotions depend on the misconception that things have intrinsic existence.

His Holiness explained that there is no role for a creator God in Buddhism and cited the Nalanda masters, Nagarjuna and Shantideva, as well as the Tibetan scholar and adept Tsongkhapa as important figures in his life. Finally, he suggested that what modern science may learn from Buddhist science concerns the workings of the mind and emotions, especially how to tackle the destructive emotions.

The Emory Tibet Symposium, Bridging Buddhism & Science, resumed in the Loseling Assembly hall. The third session, moderated by Tsondue Samphel and focussed on physics, asked what the fundamental constituents of the universe are and how it originated. Beginning with vivid illustrations of the size of the earth, moon and sun in relation to each other, as well as the distances between them, Dr Chris Impey demonstrated how a teacher can be exciting and effective at the same time. He suggested that if we were to think of the Milky Way as the size of a dinner plate, the universe would be the size of India.

Explaining that the universe and its material constituents came into being 13.8 billion years ago with the ‘big bang’, he said that all the current constituents of the universe were present at that time. While only 5% of the material universe consists of normal matter—protons, neurons and electrons, another 23% consists of dark matter. This is what provides the mass that holds all the galaxies together. The remaining 72% of the universe is dark energy, which is not yet well understood, although scientists consider it is what is causing the accelerating expansion of the universe. 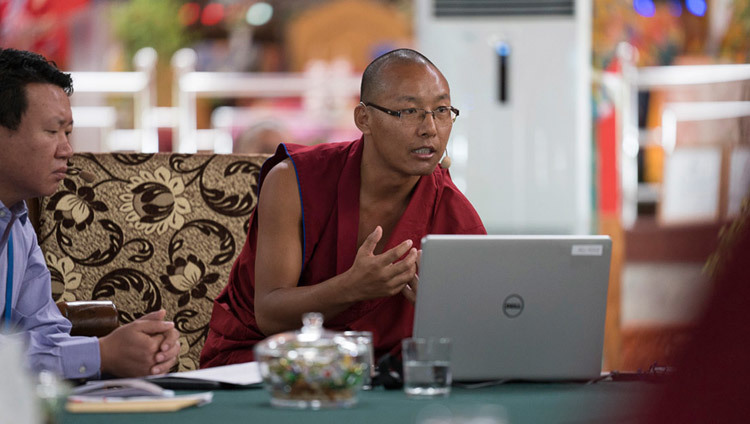 In his presentation, Ven Thabkhe discussed causal factors for the origins of the universe from a Buddhist point of view. He clarified that Buddhism does not accept the necessity of a creator god. He went on to explain that the two prime factors in the origin of the universe were material, consisting of various particles and conditional in terms of the collective karma of sentient beings that initiates the process of formation. He mentioned four stages: formation, abiding, destruction and empty.

His Holiness contributed to subsequent panel discussions of the function of karma and the role of subtle mind and energy in the formation of the universe. He also recommended that what have often been confusingly referred to as the elements: earth, water, fire and air, now known as ‘source particles’, would be more helpfully referred to in terms of solidity, fluidity, heat and mobility. He also remarked that there is not only motion through space, but also motion through time.

After lunch, moderator Are Eisen a founder of the ETS program and a member of the biology group, opened the fourth session that focussed on biology. He was pleased to introduce biologist Scott Gilbert, who he described as a great scientist, whose textbooks he had used both as a student and a teacher. With illustrations of a gestating chick and human zygote, Gilbert described dependent co-origination during fertilization, organ formation and integration. He explained how two groups of cells meet and each becomes functional through its interactions with the other. A clear example is the development of the eye where the lens and retina help form each other. 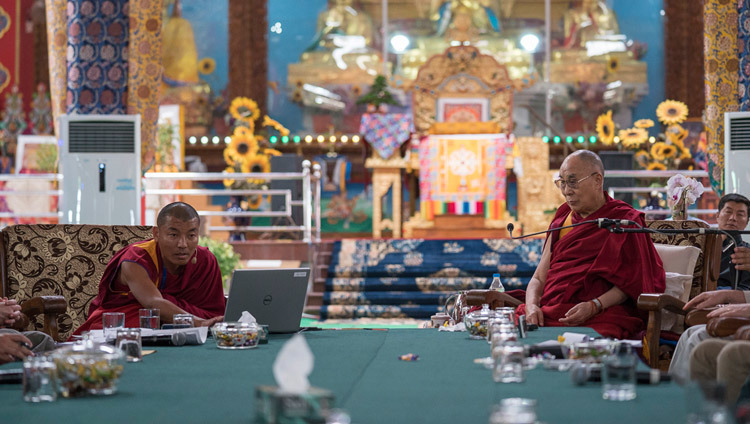 Ngawang Norbu, in discussing Buddhist perspectives on the origination of life on earth, asked what life is, how human life originated on earth and what the stages of embryonic development are. He outlined several factors that define life including an ability to reproduce, an ability to respond to stimuli, taking in nutrition and releasing waste and so forth.

In the course of subsequent discussions, in which His Holiness also took part, Scott Gilbert stated that life is for the most part a mutual living together. Evolution has traditionally be characterized by competition, but he suggested that life took over the world not by combat but by cooperation.

Towards the end of the day’s proceedings, in response to a question from His Holiness, Christoph Koch made the startling admission that in the West, and among his colleagues, very few people seriously consider other creatures, animals, birds and insects to be conscious. He attributed this to a possibly religiously derived notion of the special status of human beings within creation and affirmed that the idea that other beings possess consciousness too is something new.