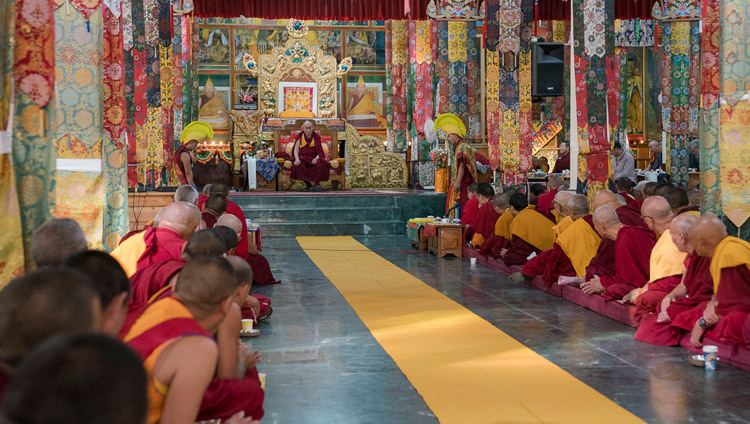 Mundgod, Karnataka - This morning, His Holiness the Dalai Lama came down to the veranda of Drepung Lachi Monastery once more and took his seat at the top of the steps. He was flanked to his right by senior members of the monastic community and to his left by members of the Central Tibetan Administration (CTA) and other guests. Before him arrayed in the front row in the monastery courtyard were the first twenty nuns to have achieved the degree of Geshe-ma. 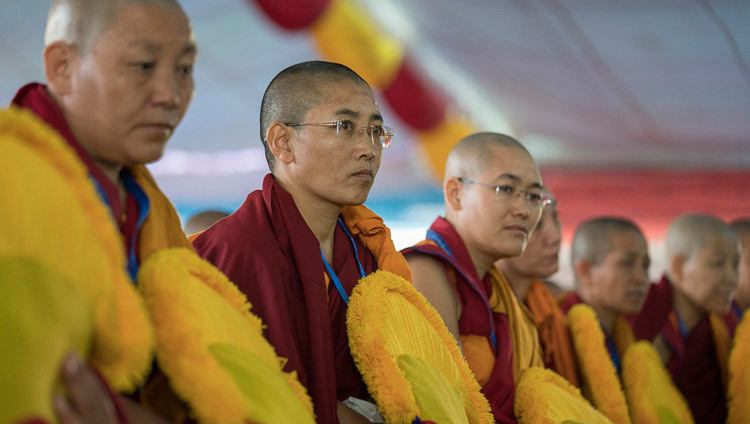 Kalon for Religion and Culture, Ven Karma Gelek, presented a mandala and representations of the body, speech and mind of enlightenment to His Holiness before announcing the opening of the official ceremony to bestow the first Geshe-ma degrees.

In explaining the background to this historic event, Karma Gelek outlined His Holiness’s vision that nuns be provided with the opportunity and encouraged to become scholars. The Religious Office of the CTA in partnership with the Tibetan Nuns Project has supported the fulfilment of that vision. Scholars from the Seats of Learning re-established here in South India too have participated in and supported the examination process. The Kalon expressed his appreciation and gratitude to all who have contributed to bringing this project to fruition.

“Starting by learning fundamental logic, the nuns have completed all the studies required to qualify for the Geshe-ma degree,” Ven Karma Gelek clarified. “They have also passed all the stages of the examinations that were taken over a four year period. Although the degree follows the pattern of the Gelukpa study programs, it is open to nuns from all Tibetan traditions. On this occasion six nuns were from Dolma Ling, five from Jangchup Chöling, six from Jamyang Chöling, one from Geden Chöling and two from Kachö Gakyal Ling at Kopan in Nepal have graduated. 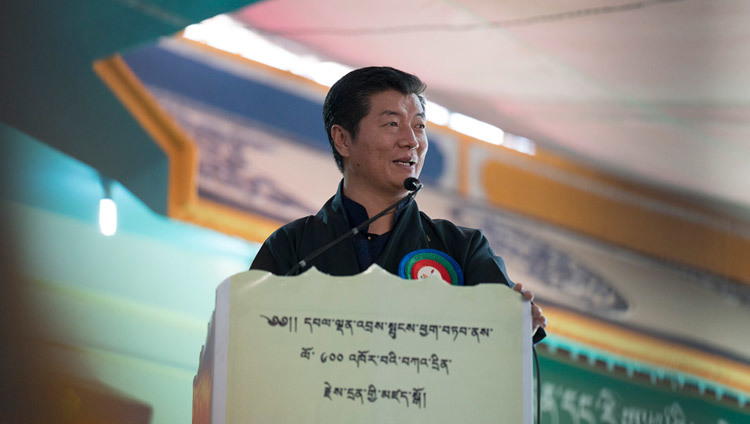 “In coming years, we expect there to be further groups of nuns appearing for the Geshe-ma degree.”

In his address, Sikyong Dr Lobsang Sangay said that in 1995 His Holiness had advised that such a degree should be made available and the Kashag had acted to put it into effect. As a consequence of this and their own hard work, twenty nuns were receiving Geshe-ma degrees today. He offered his congratulations and expressed the hope that the new Geshe-mas would take responsibility for upholding and disseminating the teachings of the Buddha.

“You have completed your studies and fulfilled the requirements for your degrees. How did this come about? As a result of His Holiness’s inspiration and advice that nuns be encouraged to study logic and philosophy. This is an unprecedented innovation, for which we have him to thank. It is through your efforts and those of your teachers that you have achieved this. I know some of you are already working as teachers. As Geshe-mas you will be able to contribute directly to the flourishing of the Buddha’s teachings in the world. Nuns from five nunneries are graduating today, but recently nuns from ten nunneries took part in the annual month-long debating session called Jang Gonchoe. I’d like to congratulate and thank you all.” 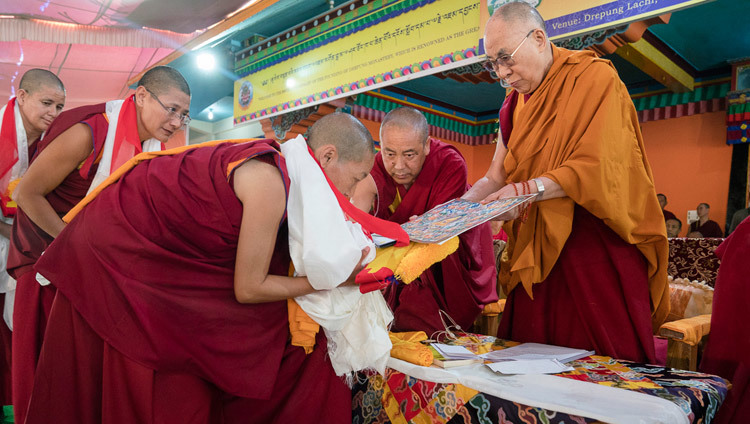 Each of the Geshe-mas then came up to receive their degree certificate, a ceremonial silk scarf and a signed picture of the Seventeen Masters of Nalanda from His Holiness. The entire group posed for photographs with him. One of their number then read out a citation of gratitude to His Holiness and presented him with a framed copy illustrated and printed in traditional ornamental style of gold on blue.

“As a token of our deep gratitude we offer you this citation,” she said, “with heartfelt prayers for your long life and the fulfilment of all your wishes.”

“As I mentioned yesterday, there were some people who were not keen on our using the term Geshe-ma for this degree, but I’ve observed you debate, you’ve studied hard and achieved high standards. You’ve qualified for this degree. I congratulate you.”

His Holiness spoke of Tibet’s Buddhist tradition, the Nalanda Tradition, and how it can be seen in terms of teachings belonging to a general structure and teachings intended for select groups of disciples. The classic texts studied by Geshes and Geshe-mas belong to the first category. He said that in the past Tibetan Buddhism had been dismissed as Lamaism as if it were not really the teaching of the Buddha. However, a clearer understanding means that today scientists are taking serious interest in, for example, what it can reveal about the workings of the mind and emotions. 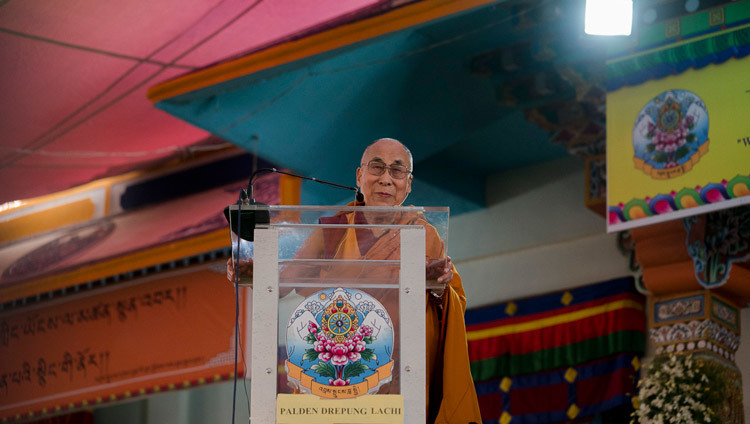 “The other day,” His Holiness continued, “I was impressed by a group of monks reciting Nagarjuna’s ‘Fundamental Wisdom’ by heart. I’ve talked elsewhere about specialization in the pursuit of further studies. You might choose to study the position of the Mind Only or Prasangika schools more closely, or take up some specialized investigation of the works of Dignaga and Dharmakirti. Alternatively, the Dalai Lama Institute for Higher Education near Bengaluru has just announced the launch of its PhD program in association with the University of Mysore, which you could join.”

His Holiness spoke generally about leadership and how the need for physical strength in earlier times meant that men became predominant in society. He said that education has introduced a greater potential for equality and stressed the need for more female leadership in the world today.

In the afternoon, His Holiness paid a short visit to the Shiwatso Library where he found groups of children enjoying a variety of books. He sat with some and asked them to tell him what they were reading.

At a function to celebrate the 50th Anniversary of the Central School for Tibetans, Mundgod, Alumni President Dr Namgyal Qusar announced that the purpose for holding a celebration was to express gratitude to His Holiness for his vision and to the Indian authorities and the Tibetan administration for helping fulfil it. 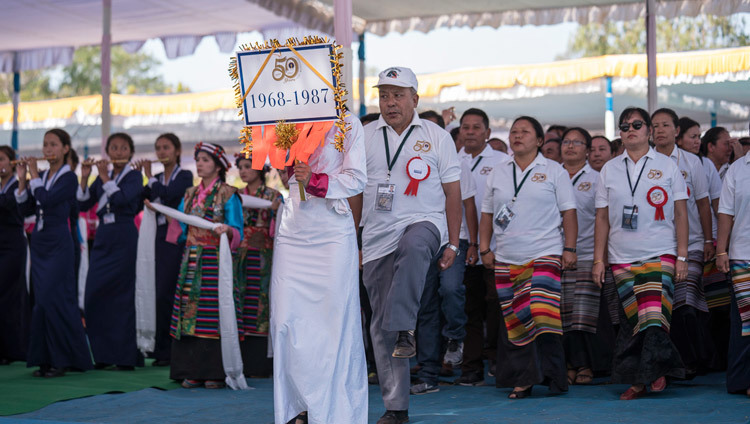 Present students of the school and groups of alumni marched past to the strains of a stirring flute and drum band. The Tibetan and Indian national anthems were played. Principal C Ravindra Dran, Education Kalon Ngodup Tsering and Sikyong Dr Lobsang Sangay addressed the crowd. The Sikyong remarked that there are said to be 60 million refugees in the world, but there are no others like Tibetans in terms of the unique educational opportunities they have created for their children.

His Holiness took up this theme, mentioning that he was happy to see a portrait of Nehru on the banner for the occasion. He explained what an important role Nehru had played in the formation of Tibetan schools and education in India in the early days in exile. He referred to Tibetans as a tough people, whose spirit remains undaunted. He recalled that in the early days of the founding of the school Tibetans thought there would be an early resolution of the problems in Tibet and that they would soon return. He reiterated that Tibetans in exile have a responsibility to speak out in support of their brothers and sisters in Tibet.

“You children at school today,” he urged, “are the seeds of the future of Tibet.”

Given a traditional welcome at Ganden Lachi Monastery, His Holiness praised the rich Nalanda tradition that Tibetans have kept alive and the Tibetan language that is uniquely suited to expressing it accurately. This, he said, is something to be truly proud of.

His Holiness gently reminded his hosts of the occasion years ago when he had been staying at Ganden Shartse Monastery and a dream had prompted him to recommend the immediate removal of a statue of Dolgyal from the protector chapel he had just visited. He recollected going to lunch with Ling Rinpoche at his Labrang later the same day and explaining what he had done. Ling Rinpoche told him it was good.

Tomorrow, His Holiness will participate in Ganden Ngacho—the Ganden Offering of the Twenty-Fifth—prayers to commemorate the passing away of Je Tsongkhapa in 1419.