Comenius University in the Morning—Addressing the Public in the Afternoon October 16, 2016 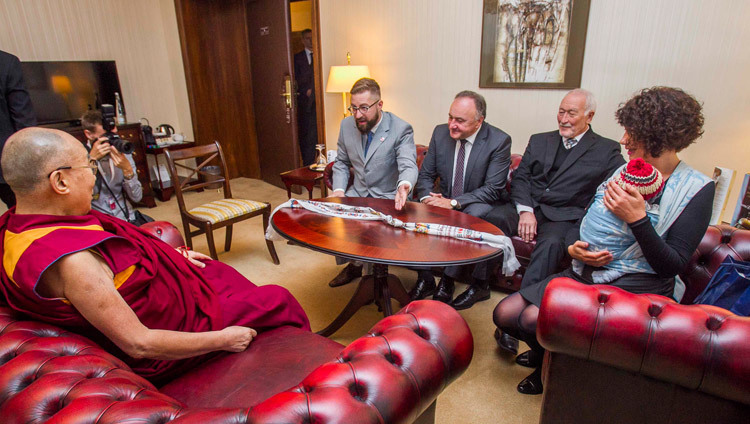 Lubomir Bajanik of Slovak TV opened his conversation with His Holiness by asking what enables him to smile and to seem so happy all the time. He replied,

“Peace of mind. I always try to look at things from a wider perspective. Looked at from different angles, problems don’t look so severe. I’m committed to contributing to making a happier, more peaceful world, so it’s better to be optimistic.

“Each of us has to make an effort to create a happier world. At this moment in Syria for example people are facing tremendous suffering. Because of the real dangers they face, many are becoming refugees. Many European countries, Germany in particular, have done well to provide them shelter. It’s appropriate to offer them refuge, to provide education to the children and training for the youth among them. However, just as important is to work to restore peace in the lands they are fleeing. Eventually they should be able to return to help rebuild where they come from. The majority of us Tibetans who are refugees still hope to be able to return and restore our own country one day.”

Bajanik asked if the crises in Iraq and Syria can really be solved through non-violent means and His Holiness answered that the use of violence only leads to more violence. The 20th century saw immense violence and the imposition of tight control in many places. In the end, the only way to solve problems is through talk and dialogue. In the long run he said he looks forward to a demilitarized world. And the first step, as one of his Nobel Peace Laureate colleagues declared is to stop the trade in arms. 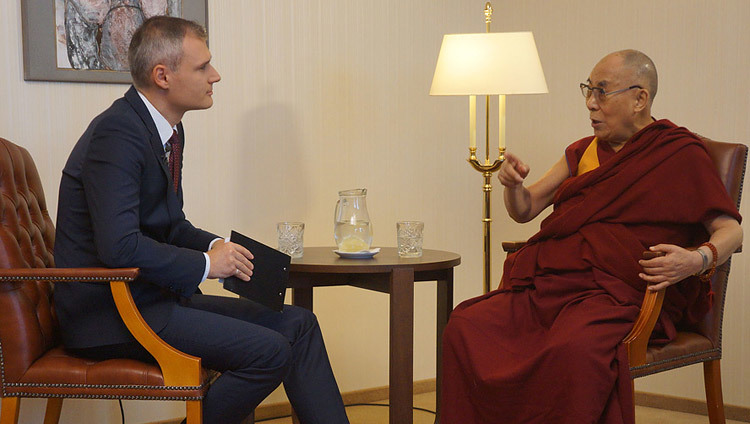 Asked about the prospects for a reconciliation of the issue of Tibet in his lifetime, His Holiness recalled that it was the Chinese imposition of reforms from 1956 onwards that provoked a revolt in Tibet. In 1959 he was left no option but to escape. He conceded that he had found Marxism attractive and felt that to begin with Chinese communist leaders were dedicated to serving the people. After 1956 and ‘57 however power seemed to have spoiled them. Nevertheless, he said, the last 40 years have seen great change.

As to whether he sees a future for Tibet as a democratic country, His Holiness observed that since his childhood he had felt there was much in the old system that needed to change. After taking responsibility for Tibet he set up a reform committee, but the Chinese opposed it because they wanted changes to be done their way. Democratisation began in early 1959 with the establishment of the Tibetan Parliament in Exile, a process that culminated in His Holiness’s retirement and devolving political responsibility to the elected leadership in 2011.

When Bajanik asked how to achieve happiness in a violent world, His Holiness told him we need to learn how to deal with our destructive emotions and conduct ourselves with honesty, transparency and warm-heartedness.

Invited to address students and faculty at Comenius University, His Holiness was welcomed at the door by Rector Karol Micietal who escorted him into the meeting to strains of triumphalist music. Prof Martin Slododnik introduced him to the 250 strong audience. 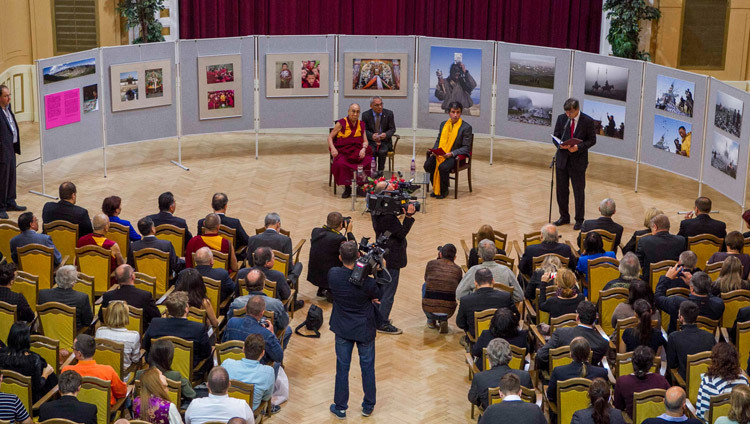 “Respected brothers and sisters,” His Holiness began, “I am honoured to have this opportunity to speak to people involved in education as you are. Wherever I go I consider whoever I meet to be another human being like me. We all want to live a happy life. We all respond to smiles, so wherever I go, I smile. Scientists are finding evidence that basic human nature is compassionate. Therefore, even if we don’t share a language, we can communicate our friendship by smiling. If we consider everyone as a human brother or sister, differences of faith, nationality, social status and so on will fade in significance. We need instead to focus on the oneness of 7 billion human beings

“Too often we think in terms of ‘us’ and ‘them’, a division that contains the seed of conflict. The use of force to solve problems is the wrong approach. After the bloodshed of the 20th century, it is important that we make this 21st century an era of dialogue instead, which involves solutions of mutual benefit.”

His Holiness mentioned his commitments to promoting human happiness and encouraging inter-religious understanding before inviting questions from the floor. In answering these he reiterated his view that real happiness comes from warm-heartedness. He explained that in addition to a limited instinctive, biological sense of compassion, we can develop a more extensive impartial sense of compassion through training and education. Such compassion can even be extended towards our enemies. His Holiness explained that to compensate for the inadequacies of modern education it is possible to cultivate universal values on the basis of our common experience as human beings, our common sense and scientific findings. 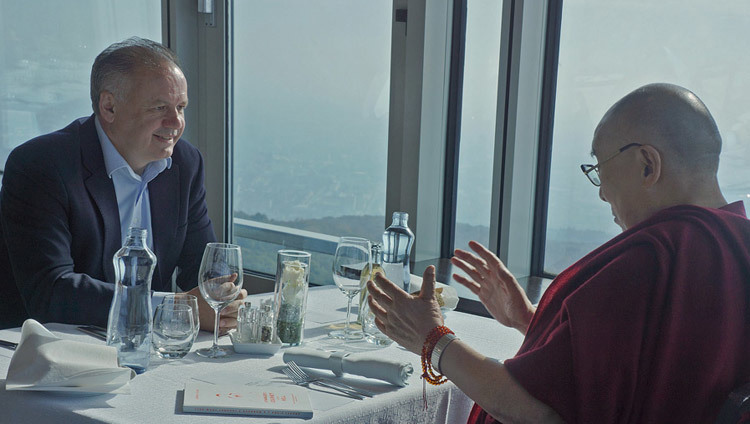 From Comenius University His Holiness drove to the Altitude Restaurant set on the television tower high above the city and surrounding wooded hills. He was received by His Excellency, Andrej Kiska, President of Slovakia, with whom he had lunch.

Back in the city at the National Tennis Centre in the afternoon, His Holiness walked onto the stage waving and acknowledging the welcoming applause of the 4000 in the audience. Martin Butora, Advisor to the President told them, “I’ve been asked to do the impossible, to introduce someone who needs no introduction,” and the applause increased. His Holiness gestured to everyone to sit down and began his talk.

“Look, I’m a normal human being. One nose, two eyes, a mouth in a smile. I’m very happy to be here. This morning I met students and teachers at the University and now I’m happy to be able to talk to you. We may have different faiths and beliefs, but we are all equally human beings. Scientists have found that constant anger, fear and anxiety undermine our immune systems, so it’s in our own interest to cultivate peace of mind. Affection and compassion are the source of inner peace. They are qualities necessary for social animals like us.

“In the early part of the 20th century, when the first and second world wars broke out, people proudly and unhesitatingly joined up to serve the war effort. I feel this has changed, that people have got fed up with war. Also, in the early 20th century, no one talked about the environment or taking steps to protect it, nor were there the inter-faith meetings that we see today. After so much violence and conflict, these are all positive developments. 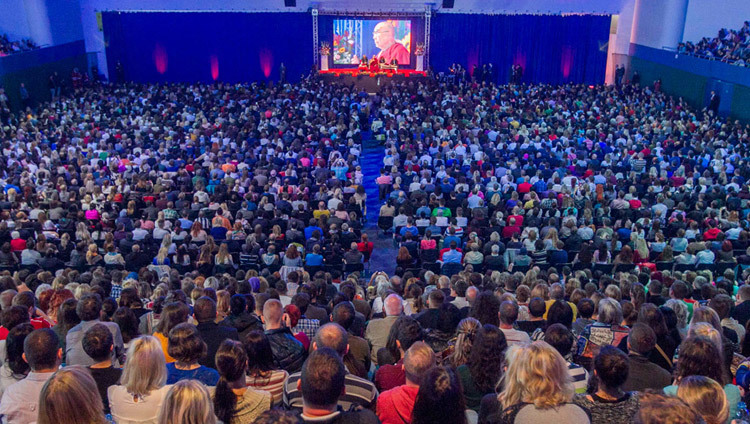 “My number one commitment, simply as one of the 7 billion human beings, is to encourage other people to understand that we all have a real responsibility to work to create a happier more peaceful world. My second commitment, as a Buddhist monk, is to encourage people to see that despite different philosophical points of view, different customs and different history, all the world’s major religious traditions convey a common message of the importance of warm-heartedness, contentment, forgiveness and tolerance. I like to point out how in India all the world’s major religions have flourished side by side for centuries. This is an example we can all learn from.

“My third commitment concerns my being a Tibetan. Since 2011, I have completely retired from any political responsibility and have ended any such role for Dalai Lamas in the future. However, I remain deeply committed to the welfare of the Tibetan people and encouraging the protection of Tibet’s language, culture and natural environment.”

In answering questions from the audience His Holiness told one distraught young woman, who wanted to know how to keep calm when faced with crisis, that among the 7 billion human beings, everyone has some problems. He told her that he follows the advice of an 8th century Indian master to assess the problem from a wider perspective to see if it can be overcome. If it can there is no need to worry any more, the important thing is to make the effort and do it. If it can’t be overcome, worrying about it won’t make things any better.

He told another questioner that forgiveness does not mean forgetting what may have been done to you, but it enables you not to feel angry about it any more.

Asked how competing politicians could bring more love and compassion to their work, he said,

“I’ve just had lunch with your marvellous President. We talked about how politics can often become dirty, but he told me that what he really wants is to serve the people. We found we have a lot in common. We talked about how existing education systems focus on material goals with too little attention to inner values. There needs to be a more holistic approach. I mentioned to him that a curriculum to enable young people to learn more about universal values is being prepared.” 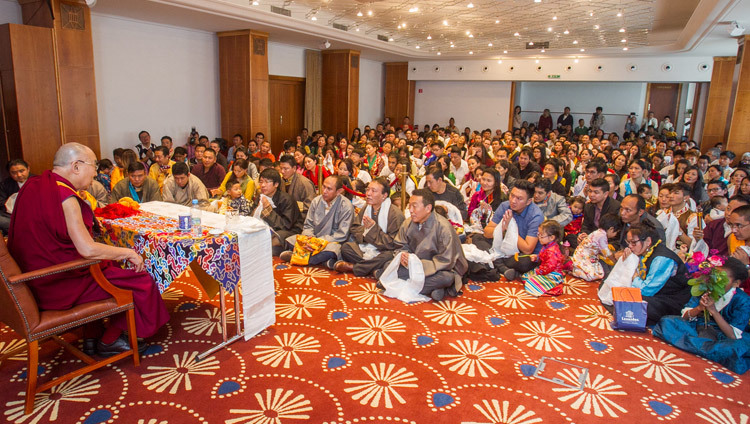 As the meeting came to an end, His Holiness told the audience how much he had enjoyed being with them. He reassured them that he feels that making a more compassionate, peaceful world is possible if each and every one of us takes the responsibility to contribute to it. He asked them to think about what he had said and if they felt any of it was practical and useful to make the effort to put it into effect.

After words of thanks His Holiness left the stage to warm applause.

Back at his hotel His Holiness met briefly with 240 Tibetans who had mostly come to see him from Austria. He reminded them that as refugees they represent the 6 million Tibetans in Tibet. He encouraged them to be 21st century Buddhists, not only to recite the 21 Tara prayers but to study what the Buddha’s teachings mean. This includes coming to understand the workings of the mind and emotions. He asked them to ensure that their children learn Tibetan.

He observed that there are now estimated to be 400 million Buddhists in China, many of them recognising the importance of Tibetan Buddhism and wanting to know more about it. He also looked forward to the 19th National Congress of the Communist Party of China that will be held in Beijing next year and his hopes that it will result in change for the better.

Tomorrow morning, His Holiness will travel from Bratislava to Prague in the Czech Republic.