Conclusion of Teachings in Osaka November 13, 2016

Osaka, Japan – After lunch yesterday, His Holiness the Dalai Lama continued his explanation of Shantideva’s ‘Guide to the Bodhisattva’s Way of Life’. 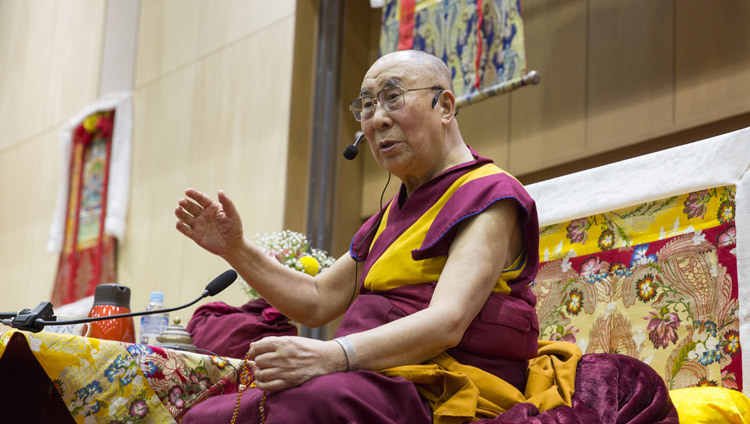 In his summary of the essence of the text he stressed that the most important parts to study if you do not have the time to go through the entire text are chapter six on patience and chapter eight on cultivating the awakening mind of bodhichitta through equalizing and exchanging self and others. He also recommended that in order to understand chapter nine, which deals with wisdom, it is important to study the Middle Way (Madhyamika) texts of Nagarjuna, Aryadeva, Chandrakirti and Buddhapalita, as well as Bhavaviveka’s ‘Blaze of Reasoning’, which deals with the diverse philosophical systems, Buddhist and non-Buddhist, that prevailed in India. Studying this enables you to acquire a comprehensive understanding of the meaning and context of Madhyamika philosophy.

In connection with the Common and Uncommon Permission of Wish-fulfilling Green Tara that he said he would be giving the next morning, His Holiness spent some time talking about tantric practice. He takes the view that it is better to explain and clarify even those this secret practices that are not supposed to be spoken of openly in order to prevent misinterpretations of tantra. He suggested that if anyone is to be blamed for revealing what is supposed to be secret in tantra, it would be those past masters in Tibet who taught tantra so widely. 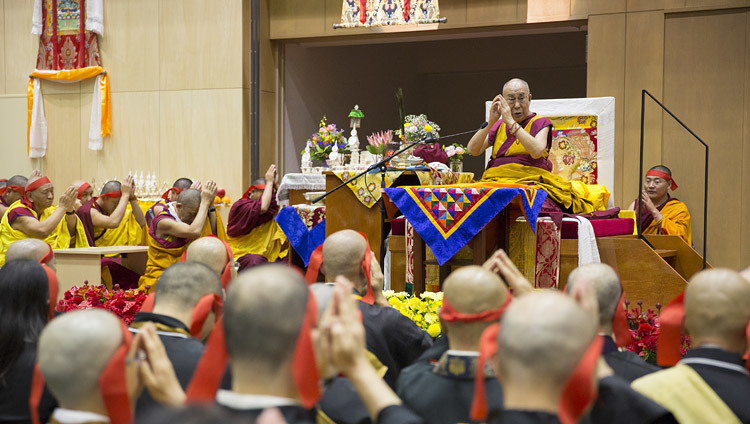 This morning, a few people were already sitting in the hall when His Holiness arrived to begin preparatory rituals for the Common and Uncommon Permission of Wish-fulfilling Green Tara. While he did that, the audience recited Tara mantras. Among the thousand people in the hall were a significant number of senior Abbots and monks from a number of monasteries from across Japan.

His Holiness had lunch with members of the organizing committee before posing for photographs with the Seifu High School teachers and staff, as well as monk volunteers.

Tomorrow, His Holiness will leave for Koyasan Monastery, the headquarters of the Shingon tradition one of the Japanese Buddhist sects that maintain a tantric tradition.