First Day’s Teaching of Shantideva’s ’Guide to the Bodhisattva’s Way of Life’ November 11, 2016

Osaka, Japan– His Holiness the Dalai Lama was greeted by a full house of 1000 people when he arrived at the newly inaugurated auditorium of Seifu High School, today. The Chairman of the organizing committee, followed by Hiraoko Hidenobu, Director of Seifu High School, made a few brief remarks to welcome him. 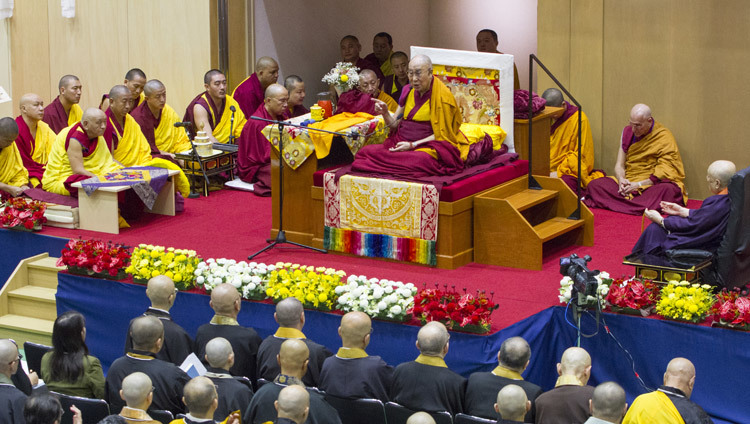 His Holiness began by explaining what he would be teaching for the next three days:

“Earlier I had planned to confer the Guhyasamaja Empowerment, however, in September I visited Europe for two weeks. On returning to Dharamsala I gave several days of ordinations and teachings for a large group of Taiwanese Buddhists. Then I made another visit to Europe, which made me quite tired. So, since the preparatory rituals for the empowerment are quite long and tiring, I thought it might be too much for me to do. After I return from Japan, I have to go to South India for an extended visit in December, following which I’ll be giving the Kalachakra Empowerment in Bodhgaya. Since I thought it might make me too tired, I decided not to give the Guhyasamaja Empowerment this time.

“My decision has provided an opportunity for the Abbot and some monks of Gyumey Tantric College to have a brief holiday in Japan. I will now confer the Common and Uncommon Permission of the Wish-fulfilling White Tara, which is also very good. I had already decided to teach Shantideva’s ‘Guide to the Bodhisattva’s Way of Life’. Since there will be only two sessions, I will not read the entire text but will summarize the essence of each chapter. So although you will not receive the entire oral transmission of the text, you will hear the actual teaching.

“Whenever possible I like to begin teachings like this with a Pali recitation of the Mangala Sutta, but suitable monks are not with us today, so we will recite ‘The Heart Sutra’ in Japanese today and day after tomorrow; and tomorrow we’ll recite it in Chinese.”

His Holiness then began to explain Shantideva’s text and brought the session to an end in time for lunch.