Prague, Czech Republic - The overcast skies and cold weather did not detract from the warmth of His Holiness the Dalai Lama’s reception by the Minister of Culture, Mr Daniel Herman, and a group of parliamentarians of the Christian and Democratic Union - Czechoslovak People's Party. The Minister and His Holiness first visited a chapel within the Ministry before sitting round a table to exchange views. 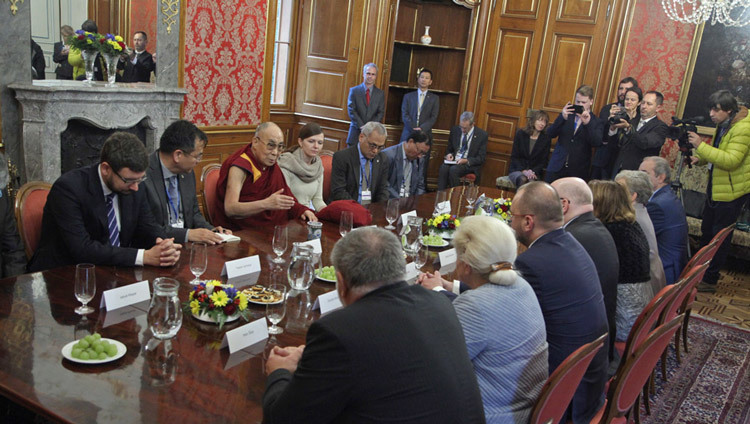 His Holiness remarked that human beings have a unique ability to extend their concern to all other beings. Scientists report findings that indicate that human nature is basically compassionate. He suggested that this accords with the idea of being creatures of a creator who embodies infinite compassion.

“Among 7 billion human beings none are free from problems,” he said, “but the best way to keep calm under such circumstances is to cultivate compassion for others. Religion should have a role in reducing violence by fostering a calm mind. Violence springs from anger, hatred and fear. However, in the world today, in addition to those who have no faith, there are those who only pay lip-service to religious belief and practice. If religion is to mean anything to us, we need to be serious about it.”

The Minister thanked His Holiness for his advice and told him he and his colleagues were interested in practical ways to move forward.

“In today’s world we have a quite materialistic culture,” His Holiness remarked, “but material goods only provide us with physical comfort. Compassion, on the other hand, brings inner strength and inner peace. No matter how prosperous or poor you may be, if you have compassion for others you can be a peaceful happy person. However, it seems there are those who attend their places of worship, but whose lives are relatively untouched by the religious teachings involved.”

His Holiness mentioned his admiration for Pope John Paul II and the inter-religious Assisi meeting he organised in 1986. He reported his telling the Pope it should be the beginning of a movement for religious groups to get to know each other and exchange their different experiences with each other. As the gathering broke up, members of the parliamentary group clustered round His Holiness, requesting him to sign books or take selfies with them. 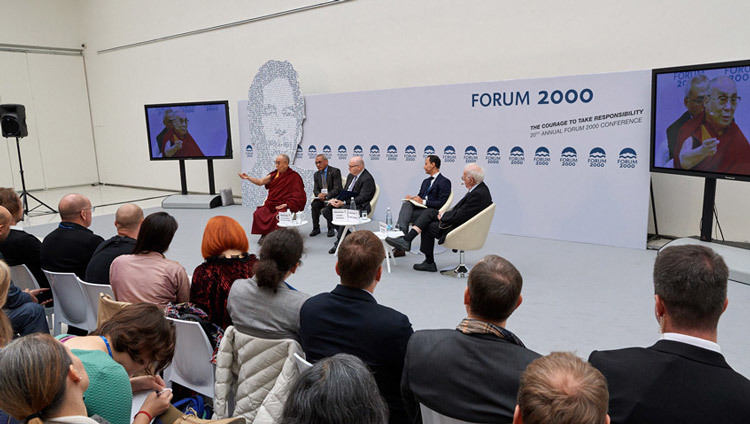 Minister Herman accompanied His Holiness on the short drive to Manes Hall where they were both due to be panellists in a discussion of the Paradox of Religion as part of Forum 2000. Moderator of that meeting, Shlomo Avineri welcomed them on arrival. He introduced the panellists, who also included Egyptian author and journalist, Tarek Osman to the audience of 150 and invited the Minister to begin. He spoke of being a Roman Catholic with Jewish roots who found, as he grew up in Czechoslovakia, that religion gave him a freedom of heart that remains an inspiration in his work as an active politician.

His Holiness spoke of his own three commitments.

“As a human being I am concerned with encouraging people to be happy, to understand that if their minds are upset mere physical comfort won’t bring them peace. Whereas if their minds are at peace even physical pain won’t disturb their calm. Over the last 30 years I’ve had serious discussions with scientists. I take their finding evidence that basic human nature is compassionate as a source of hope.

“On the one hand, all major religious traditions convey the same message of love and compassion. On the other, more than 1 billion people today have little interest in religion. Therefore, we also need to find other ways to educate people about the importance of inner values, such as compassion.

“In seeking to promote harmony among our religious traditions, it is useful to realise that the once prevalent notion that there can only be one truth and one religion best applies to personal practice. In terms of community and the world at large, there are evidently several truths and a multiplicity religions. When I was still in Tibet, I considered Buddhism was best. But once I reached India and came into contact with people like Thomas Merton and Mother Teresa, as well as wonderful Hindu, Jewish and Muslim friends, I developed a real appreciation and respect for other traditions.” 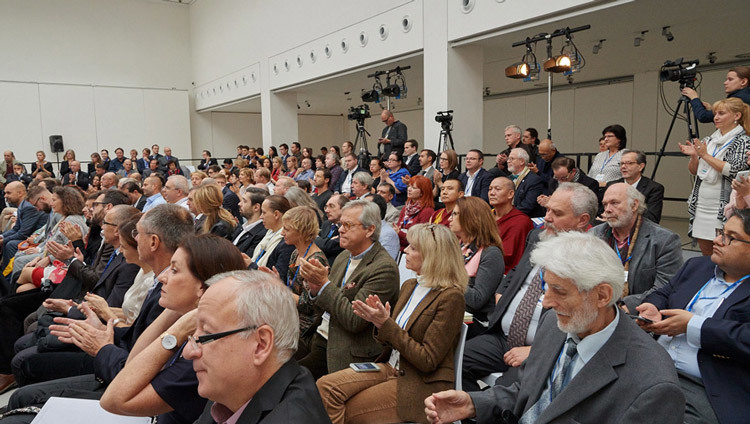 In discussing a secular approach to ethics, His Holiness remarked that there are different ways to understand the word secular. He prefers to use it as it is understood in India to mean an unbiased respect for all religions and even the views of those who have no faith. He suggested that when Bolshevik and French revolutionaries historically advocate secularism, they were less opposed to religious teachings than to religious institutions.

In his contribution, referring particularly to the Middle or Near East, Tarek Osman spoke of its recent turbulent history. He suggested that in a climate of turbulence, religion has the appeal of providing order. Difficulties arise however when that sense of order becomes control.

Daniel Herman mentioned parallels he has drawn between experience of the collapse of communism and the biblical account of the Jews’ exodus from Egypt and their 40 years in the desert on the way to the Promised Land. A real change in mentality takes more than one generation to achieve.

His Holiness returned to his emphasis that too many problems facing humanity revolve around too great a focus on secondary differences of faith, race, nationality, economic status and so forth. The important thing to remember is that fundamentally we are all the same—we are all equally human beings. Challenges like climate change and upheavals of the global economy require us to acknowledge the oneness of humanity. Because we have to live together, we have to be more realistic.

Shlomo Avineri wound up the meeting by recalling what his friend Edward Said had said about the responsibility of intellectuals to speak truth to power, but added that power has to be open to dialogue. 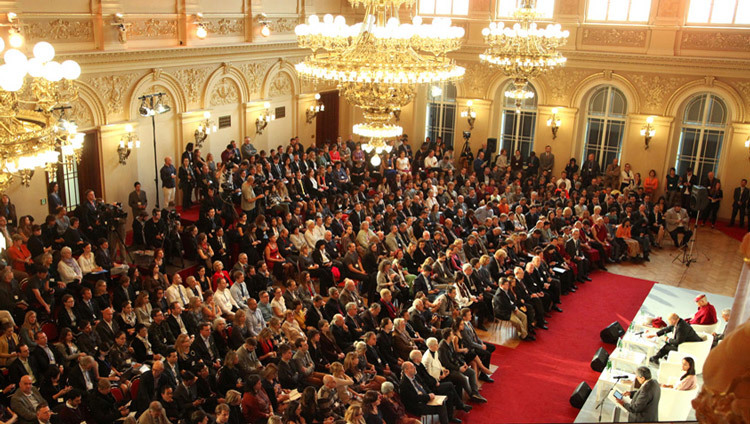 After lunch at the Zofin Palace, His Holiness walked to the Forum Hall to attend a closing panel on The World and Its Current Challenges. He was joined on the panel by Prof Tomas Halik, President of the Czech Christian Academy and Manal al-Sharif, a Writer and Women’s Rights Activist from Saudi Arabia. She is a recipient of the Vaclav Havel Prize for Creative Dissent.

Moderator, Sociologist Surendra Munshi, took some time to give an overview of the conference so far that touched on issues of leadership, the role of intellectuals, and a sense of truth. He invited His Holiness to speak first.

“I feel that if looked at from a close and narrow perspective our problems can seem intractable. However, if we can step back and view them from a wider perspective and in the longer term, they don’t seem so grave and often reveal positive aspects.

“Since common sense and scientific findings indicate that anger, hatred and fear disturb our peace of mind, our education systems need to pay more attention to inner values like compassion and warm-heartedness. The need is to be more concerned about the whole of humanity, as well as concerned about our planet. I admire the spirit of the European Union in according greater concern to the larger community than to narrow national interests.

“If we can develop inner peace, we can build on it to create world peace. Many experts agree that current education systems are. What we require is a more universal approach to human values that can appeal to everyone. There are grounds for optimism. 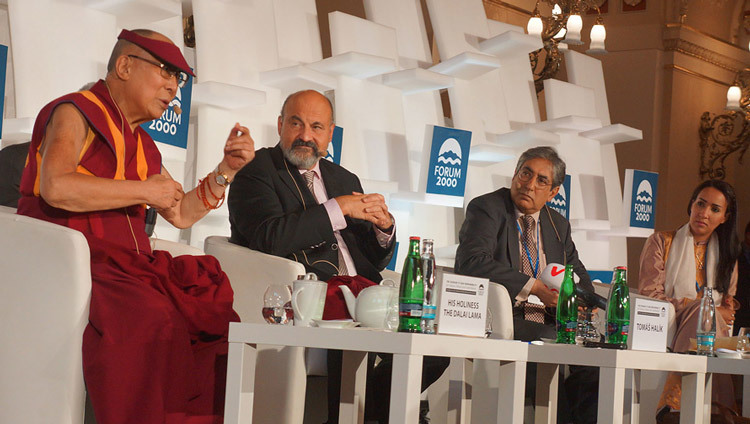 He concluded: “I admired President Havel and is struggle for truth. And although he is no longer physically with us, we have a responsibility to carry his spirit forward and to fulfil his vision.”

In his remarks Prof Halik referred to the effects of globalisation and the need for confidence. He expressed the view that globalisation defeated communism, which as a monopoly could not withstand an open society. Today however, we are experiencing a less positive response to globalisation. The world is fragmenting and globalisation may have contributed to the outbreak of religious extremism. Halik added wryly that the invisible hand of the market has given rise to the hidden hand of corruption.

Manal al-Sharif mentioned that realisation has dawned that her country, Saudi Arabia, exports oil, but has also exported a brand of fundamentalist Islam. She reported that despite being informed that God had appointed guardians for them, women were now saying, “I am my own guardian.” She said it takes courage to take responsibility for your situation and it takes courage to take action.

His Holiness added that there are three aspects to religious traditions: basic religious practice of love and forgiveness; philosophical views such as whether or not to believe in a creator and cultural aspects. Cultural aspects relate to customs and ways of life from the past. Many of them are now out of date and so should change. 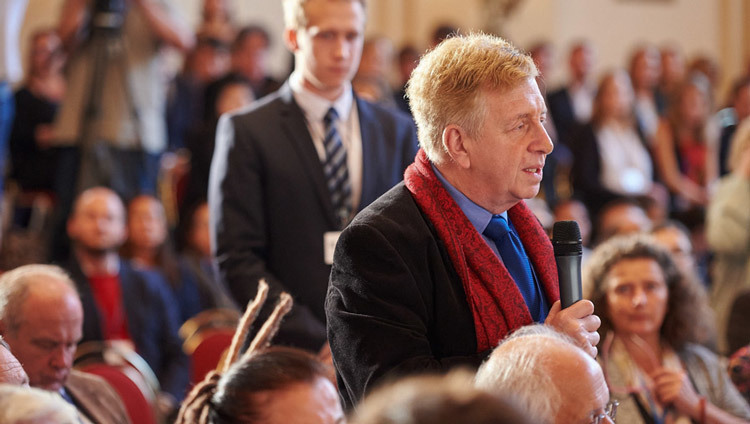 In answering one or two questions from the floor, Manal al-Sharif observed that there are 1.7 billion Muslims in the world, while ISIS comprises perhaps 4000 fighters. This is an example of the loud minority and quiet majority. In connection with resolving the growing gap between rich and poor, His Holiness stressed the importance of self-confidence in people’s ability to improve their lot. His final remark was that while killing in the name of religion is wrong, to remain indifferent to it is wrong too.

Surendra Munshi brought the meeting to a close with thanks to the panellists for sharing their thoughts. Once again members of the audience converged on the stage clamouring for His Holiness’s attention as they sought his signature, a handshake or the opportunity to take a photograph with him. He steadily met all requests before going into his final meeting of the day with the Forum 2000 International Advisory Board.