Milan, Italy - His Holiness the Dalai Lama began his public day by giving an interview to an old friend, Pio d'Emilia for SkyTG 24. d'Emilia opened his questions with an enquiry about whether His Holiness’s health is still good. 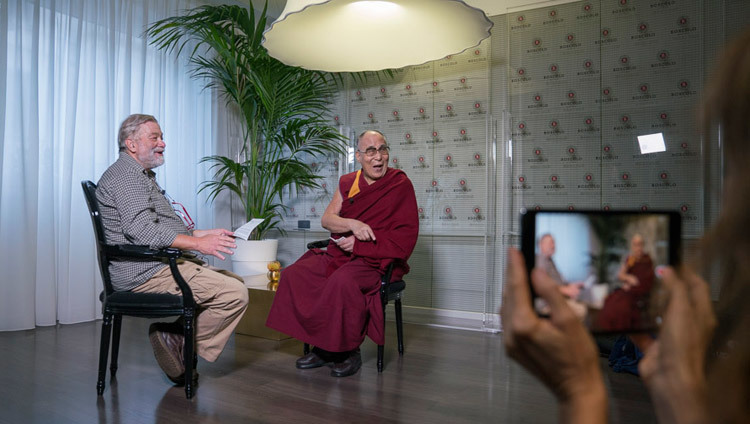 “Yes,” he told him, “but I’m getting older and sometimes late in the day I feel tired. However, I regularly get 8-9 hours’ sleep a night, so I wake fresh every morning.”

About the repeated Chinese accusation that he is a splittist, His Holiness remarked,

“Historically, Chinese documents show, there were three empires, Chinese, Mongolian and Tibetan. After 1951 as we tried to come to an arrangement, we signed the 17 Point Agreement, a precedent followed by no other Chinese province. In the 60s we raised the issue of Tibet at the UN to little effect. In the 70s we realized that ultimately we would have to enter talks with the Chinese government and in 1974 formally declared we were not seeking outright independence, but the implementation of rights for minorities guaranteed in the Chinese constitution.”

Regarding his travelling to Tibet or China, His Holiness stated that since 1954 he has expressed a wish to go to Wu Taishan on pilgrimage, which he would still like to do. 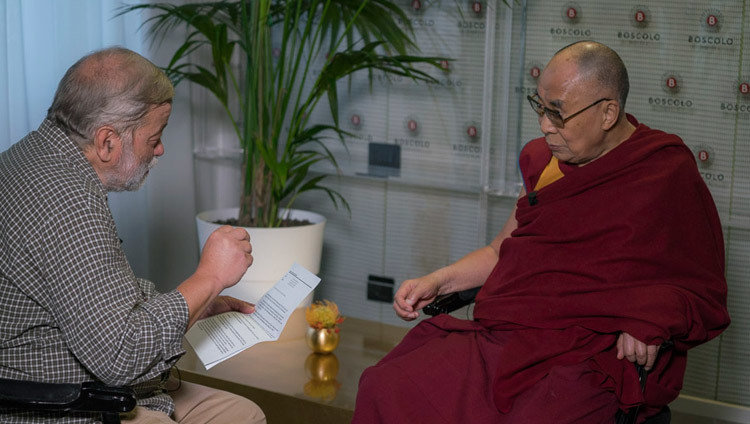 d'Emilia asked if the world should be worried about China and His Holiness told him that China is an ancient country, a Buddhist country, but it is also presently a totalitarian state where many people are isolated from reality. Some of its leaders are realistic, whereas others continue to take a hard line. About Xi Jinping His Holiness remarked that it is hard to say. His family is Buddhist. His father, who His Holiness knew, was friends with the late Panchen Rinpoche. His Holiness admires his efforts to tackle corruption.

Prompted to comment on not being invited to the recent reprise of the inter-religious meeting in Assisi, His Holiness made clear that he feels meeting the general public is more important and can be more effective than meeting leaders.

d'Emilia pressed him about his successor and after establishing once again that it will be up to the Tibetan people to decide whether they want to recognise another Dalai Lama, he mentioned several options for this to be done. One is for him to nominate someone already alive to be his reincarnation, another is for his successor to be elected, or for a senior lama to take on the responsibility on the basis of seniority, much in the way the Ganden Tripa is chosen. Conceding that he has been urging women to take more leading roles in promoting love and compassion, he remarked that if a likely young girl were to declare she was the Dalai Lama, “Then, why not?”

Noting that the Japanese Emperor has suggested he might abdicate and one Pope has already resigned, His Holiness was asked if he considered doing so too. He replied, “I’ve already retired from political responsibility. I suppose I could resign from being a monk, but I don’t think I could ever resign from being Dalai Lama.” 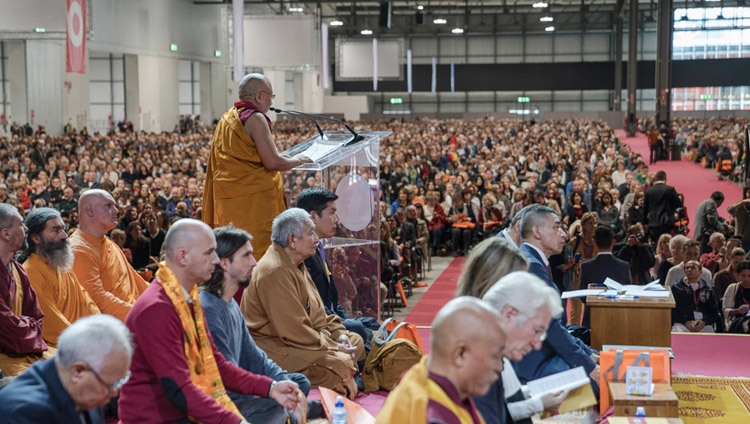 After yesterday’s misty early morning, today, skies were high and blue as His Holiness drove to the Rho Fiera Milano hall where he was to teach. Thamthog Rinpoche introduced him to the 8800 strong crowd. Translation into Italian, English, French, German, Spanish, Russian, Mongolian and Vietnamese is being provided.

The session began with Sri Lankan Theravadin monks reciting the Mangala Sutta in Pali, followed by a Vietnamese group, most of whom were women, who chanted the ‘Heart Sutra’ to a steady gentle rhythm in Vietnamese.

“Today, at the request of the Tibetan Institute of Buddhist Studies led by Thamthog Rinpoche, I’ve been asked to teach Je Tsongkhapa’s ‘Three Principal Aspects of the Path’ and ‘In Praise of Dependent Arising’,” His Holiness explained. “I’ll begin with the ‘Praise’ as an introduction to Buddhist teachings and follow it with the ‘Three Principals’ as a guide to how to practice.

“We human beings are physically, mentally and emotionally the same. We have two eyes, one nose and a mouth, wherever we are from. We all want to lead a happy life. This is the right of all human beings. While some material and technological development, of weapons for example, prompts fear, by and large it is intended to bring comfort and benefit. However, even in highly developed countries many are full of stress, worry and frustration. Material development, by itself, does not yield complete satisfaction. 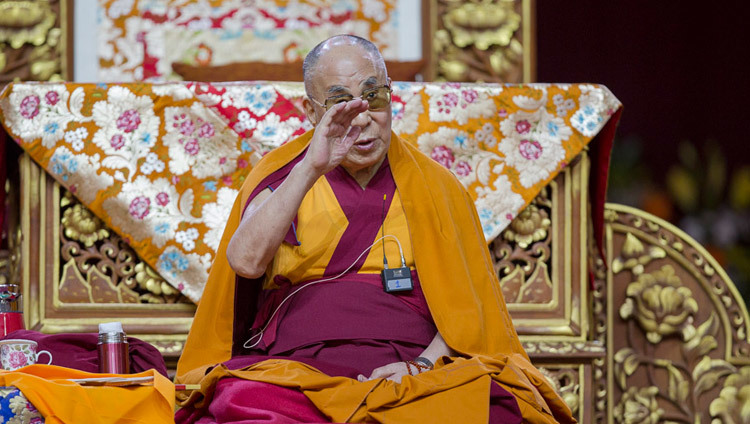 “Since 1 billion out of 7 billion human beings have no interest in religion, and even the faithful are frequently not that serious, we need to find ways of developing inner values without touching on this or that religious tradition. Nevertheless, all religions have the potential to create better human beings and I’m very happy and honoured to see many representatives of other traditions among us here today.

“The collection of teachings in the Pali tradition, including the Four Noble Truths and the 37 Factors of Enlightenment, along with the practice of ethics, concentration and insight, comprise the very foundation of the Buddha’s teachings. On top of this are teachings, not given openly in public, of the six or ten perfections, the awakening mind of bodhichitta, and the clarification of what true cessation means on the basis of selflessness.

“This is why if it’s possible I like to begin teachings like these with a recitation of the Mangala Sutta followed by the Perfection of Wisdom in twenty-five lines—the ‘Heart Sutra’.”

His Holiness explained that since an earlier praise of Indian masters, the ‘Six Ornaments and Two Supremes’ did not include many of the Indian masters whose works have played a seminal role in the Tibetan tradition, he composed a ‘Praise to the 17 Masters of Nalanda’. 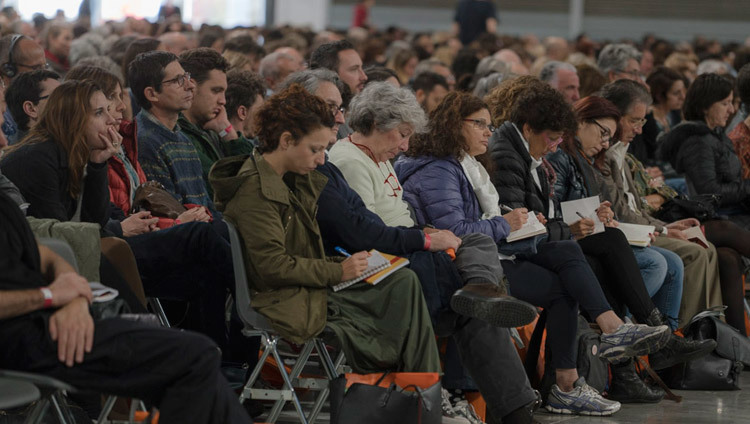 The Four Noble Truths, with their 16 characteristics and the 37 Factors of Enlightenment, the foundation of the Buddha’s teaching, belong to the first turning of the wheel of Dharma. The Perfection of Wisdom teachings expounded at Rajgir comprise the second turning. The ‘Unravelling of Thought Sutra’ and the ‘Tathagata Garbha Sutra’, which explains Buddha nature, the clear light nature of the mind, the basis for the practice of Highest Yoga Tantra, comprise the third turning.

After lunch, addressing more than 200 Tibetans who live in Italy, Switzerland and Spain, His Holiness told them:

“I’m happy we can have this brief meeting. We’ve been in exile 57 years now. In the 50s upheaval took place in Amdo and Kham, with protests against the Chinese who were imposing change on Tibet. Ours had been a feudal system, but it wasn’t all bad. Servants are reported to have informed their former overlords when they were in danger so they were able to escape, such was that standard of honesty and justice among us. When class struggle was imposed on Tibetans, it didn’t work out well. Anyway, by 1959 I had to escape. 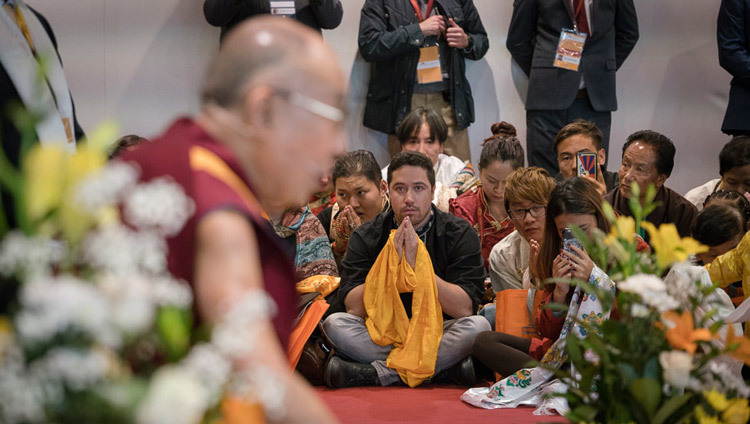 “The generation who lived through those times have mostly gone, but the Tibetan spirit remains firm and strong. The hardliners who used force against us thought that once the Dalai Lama had gone, everything would go their way. They were wrong. I’ve heard it said that when Chairman Mao was told of the use of force in Tibet, he asked what had happened to the Dalai Lama. When he heard I’d escaped, he remarked, “In that case, we’ve lost.” Hardliners thought that if they crushed protest in Central Tibet they’d win—again they were wrong.

“Since the Chinese themselves are passionate about preserving and upholding their own culture, it’s surprising that they don’t understand that Tibetans are equally passionate about protecting theirs. It’s said that there are now 400 million Chinese Buddhists, many of them educated people, who have learned that Chinese monks don’t explain very much, whereas Tibetan monks are well trained to explain. All our Tibetan Buddhist traditions have roots in the Nalanda tradition, which means they study logic and reason in conjunction with philosophy. No other Buddhist tradition can boast of this.”

Back in the teaching hall His Holiness answered a series of questions from the audience before resuming his teachings. Reading through the verses of ‘In Praise of Dependent Arising’, he said verse 15 summarizes what had gone before.

The extremes of nihilism and eternalism are denied.

Verse 42 mentions that, for the author, Je Tsongkhapa, understanding the meaning of the teaching of dependent arising is consolation for not being able to hear it taught by the Buddha himself.

Seeing the excellent quality of this teaching
Pulls at my heart
As a hook does to a fish.
Sad is it not to have heard it from you.

His Holiness remarked that as a child his mind was quick and bright and he was able to memorize this text in one morning. 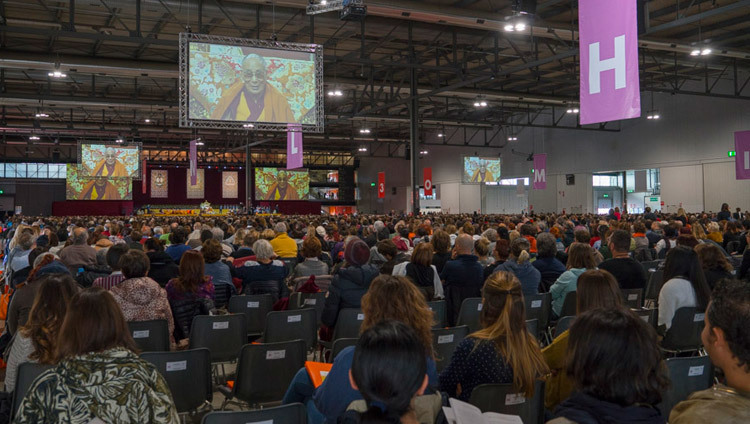 He explained that the ‘Three Principal Aspects of the Path’ was written in response to a request from Ngawang Drakpa, not only one of Tsongkhapa’s closest disciples, but the one he predicted who will be his first when he manifests Buddhahood.

Despite running well past the announced time, His Holiness steadily read through the text explaining the determination to be free, the awakening mind of bodhichitta, as well as the relations between dependent arising and emptiness. Having completed both texts, His Holiness left the stage and emerged from the building into the brilliant sunshine of late afternoon.