His Holiness the Dalai Lama Begins to Teach the ‘Commentary on Dignaga's 'Compendium of Valid Cognition' October 10, 2016

Riga, Latvia - Yesterday, His Holiness the Dalai Lama flew from India to Latvia via Helsinki. This morning, with a chill wind blowing through the streets and parks of the capital Riga, he drove to the Skonto Hall where an audience of 4500 awaited him. Of 3000 or so who had come from Russia, roughly 500 were from Kalmykia, 3-400 from Buryatia and 100 from Tuva. As His Holiness stepped onto the stage, many surged forward to catch a closer glimpse as he greeted them. He took his seat before a huge reproduction of a painting of the 17 Masters of Nalanda and suggested that the ‘Heart Sutra’ be chanted first in Sanskrit and then in Latvian. His Holiness’s teachings, organized by Save Tibet Foundation (Moscow) and Saglabasim Tibetu (Riga), are being translated and webcast in English, Latvian, Estonian, Russian and Mongolian, as well as Tibetan. 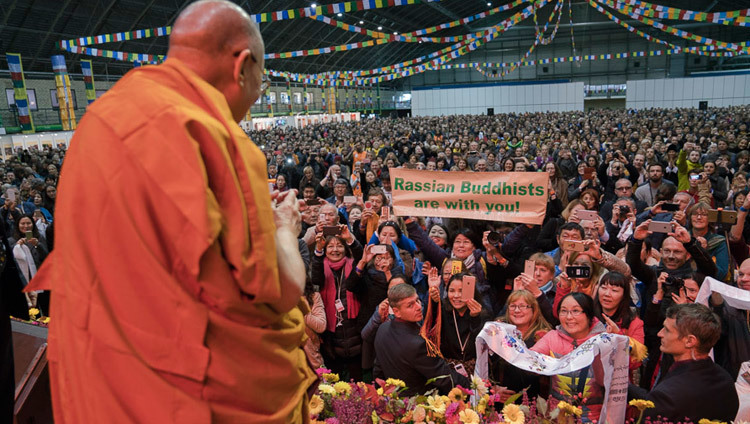 “Here we are once again in Latvia,” His Holiness began, “and I’d like to thank the organizers for creating this opportunity for me to give some explanation of Buddhist teachings. Not so long ago when I was here to give an introduction to Buddhism, a Russian told me how difficult it is for many of his compatriots to travel to India because of economic constraints. He told me it would be much easier for them to come to Latvia. I said I would look into it and was pleased to find my friends here supported the idea—so here we are and a huge number of people have come.

“We human beings are all the same; there are essentially no differences between us. We are all born the same way and we all die the same way. We need to recognise this oneness of humanity—we all want to avoid suffering and find happiness. If we focus instead on differences between us, we soon see each other in terms of ‘us’ and ‘them’ and deeper divisions occur. If, on the other hand, the whole of humanity were at peace, we’d all be happy.”

His Holiness recalled that when he first came to Europe in 1973 he was struck by the realization that even where there was great material development, people were still unhappy. At the same time he recognised and admired the spirit of the EU in placing the good of the wider community above the interests of single nations. The result was that even if they couldn’t help each other, they would do each other no harm. 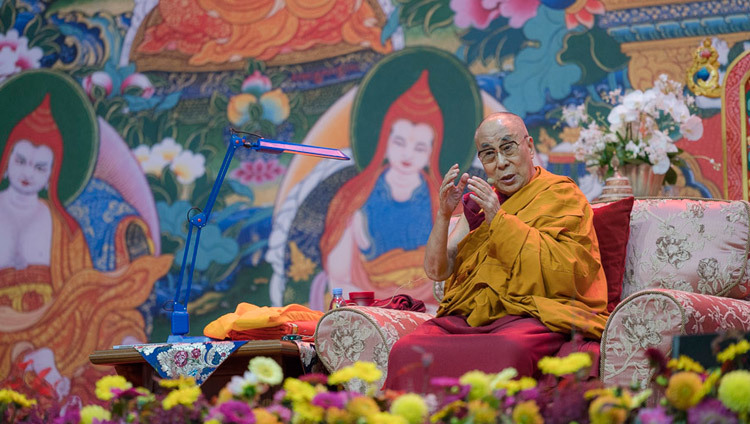 He observed that in general all religious traditions teach love and compassion. While in Syria and Iraq today there is conflict between Sunni and Shia, in India, the world’s most populous democracy, with its multitude of religions, inter-religious harmony prevails. All religions, he said, have a religious aspect, which involves the practice of love, compassion, tolerance and self-discipline. In their philosophical aspects there are a range of differences, but their purpose is to support and encourage the practice of love and compassion. Theistic traditions believe everything is created by God, often portrayed as infinite love or mercy, a spark of which is within us all.

Other traditions like Jainism and Buddhism don’t believe in a creator God, but teach that responsibility for pain and pleasure rests on our own shoulders. If we don’t want suffering we should avoid negative actions and if we want happiness we should do good.

All religions also have a cultural aspect. At the time Mahavira founded Jainism in India there were widespread animal sacrifices with negative economic consequences. Mahavira taught strict non-violence and vegetarianism. Not long after the Buddha also emphasised non-harm and non-violence. Cultural aspects reflect the values of the day, therefore today the caste system in India is at odds with democracy and equal rights. His Holiness said he appeals to Indian spiritual leaders to point out these drawbacks and usher in change. 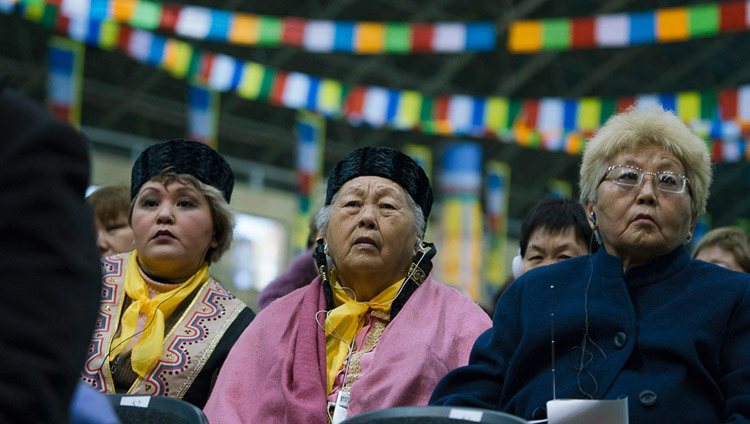 “The Buddha,” His Holiness explained, “was born into a royal family, renounced that comfortable life and engaged in austerities for six years. Eventually he sat under the Bodhi tree near the Niranjana River and attained enlightenment. Although he pondered whether anyone else would understand what he had realised, he found his former companions in austerities and explained to them the Four Noble Truths. These constitute the first Turning of the Wheel of Dharma and form the basis of both the Pali and Sanskrit traditions of Buddhism.

“The ‘Heart Sutra’ consists of a dialogue between Avalokiteshvara and Shariputra, a teaching attended by those with pure karma. Some say because they were not historically recorded that the Perfection of Wisdom teachings to which it belongs were not taught by the Buddha. Masters like Nagarjuna and Bhavaviveka have argued that they are the Buddha’s teachings. They explain selflessness or emptiness, that nothing has defining characteristics, that things have no intrinsic existence. Again Nagarjuna defended this.

“Also belonging to the Nalanda tradition, Dignaga and Dharmakirti wrote about logic and epistemology. The teaching we are going to go through today comes from Dharmakirti’s ‘Commentary on Dignaga's 'Compendium of Valid Cognition'’. Since I had heard that in the early 20th century a Russian scholar Fyodor Shcherbatskoy translated some of Dharmakirti’s works into Russian and English, when we were discussing what I should teach, we decided that the second chapter of Dharmakirti’s classic work on Valid Cognition'’ would be appropriate.” 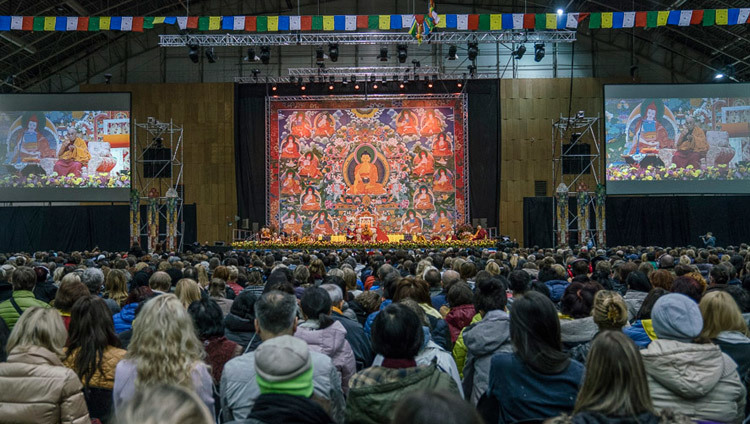 His Holiness remarked that although Buddhism spread across the length and breadth of Tibet, those who actually studied it were few. Consequently, in the early days in exile he encouraged monasteries that had previously been occupied performing rituals to take up the study of the classic texts. He encouraged nunneries likewise to take up such studies with the result that later this year qualified nuns will be awarded a Geshe Degree.

His Holiness observed that an understanding of selflessness, which is unique to Buddhist teachings, enables us to reduce our exaggerated way of looking at things. He reported that American psychiatrist Aaron Beck had told him something similar, that when we are angry or attached to something or someone, they appear wholly negative or wholly attractive. In fact, Beck declared, this is 90% mental projection.

So, reflecting on emptiness along with the awakening mind of bodhichitta is a source of peace of mind. His Holiness said that such inner peace fosters health, well-being and longevity. Moreover, he added, if we follow the approach of the sharp-witted and apply reason in our studies, the Buddhist tradition will survive a long time.

His Holiness was joined for lunch by 15 parliamentarians from the Baltic States: two from Estonia, three from Lithuania and ten from Latvia, along with key supporters from each country. 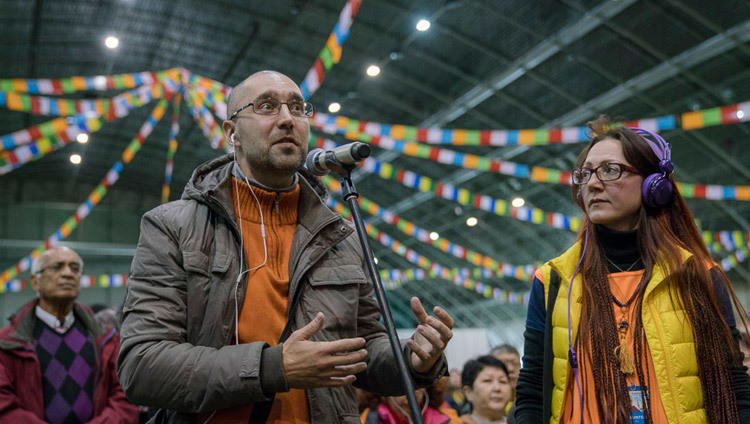 Resuming his teachings after lunch, His Holiness first invited questions from the audience. In answering them he explained how much he appreciates vegetarianism and how it is now widely observed in the common kitchens of Tibetan Monasteries in India, despite his own inability, for medical reasons, to be fully vegetarian.

He advised Buddhists in St Petersburg to overcome sectarian differences by acknowledging that all Tibetan Buddhist traditions have roots in the Nalanda tradition. He suggested that since Buddhists in Moscow feel a need for a common building in which to meet, they could establish a learning centre that could also be a location for academic studies and inter-faith meetings.

Continuing his reading of the second chapter of ‘Commentary on Dignaga's 'Compendium of Valid Cognition'’ His Holiness touched on how the Buddha became a reliable guide, and how valid cognition, being an awareness that corresponds with reality, is undeceptive. His remarks also clarified that the substantial cause of consciousness must be consciousness.

He reiterated that in explaining dependent arising the Buddha taught us how to overcome distorted views. Such a wisdom is a powerful antidote to ignorance. Applying it we can remove ignorance from our mental continuums. Finally, he remarked that the Buddha did not teach about suffering to scare us, but to indicate reality, the possibility of its cessation by cultivating the path. He made clear that understanding the Four Noble Truths in the context of the Two Truths—conventional and ultimate truth—is the way to take refuge in the Three Jewels on the basis of reason.

His Holiness announced that in addition to continuing to read the text tomorrow he would offer the opportunity for members of the audience to generate the awakening mind of bodhichitta.