Bodhgaya, Bihar, India - A wintry sun shone as His Holiness the Dalai Lama took off this morning from Delhi for Patna, capital of Bihar. On arrival, he was received by Chief Minister, Nitish Kumar. 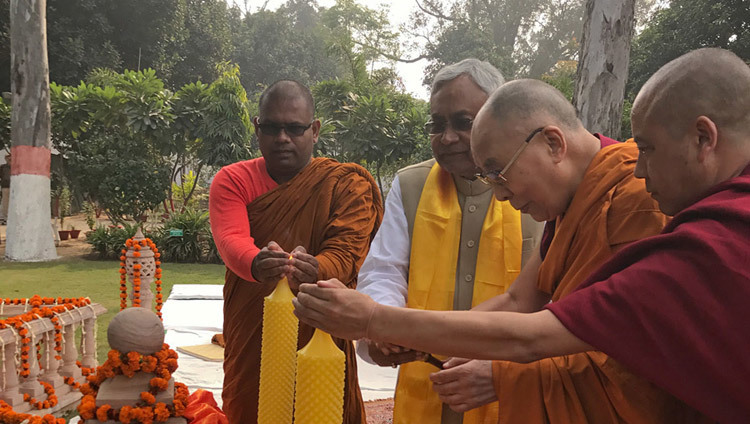 Together they drove directly to the Buddha Smriti Park, where groups of monks from both the Pali and Sanskrit traditions waited to welcome them. They approached the Karuna Stupa before which both His Holiness and the Chief Minister lit candles and incense. Prayers were chanted first in Pali, after which His Holiness and monks of Namgyal Monastery chanted in Tibetan, and finally there were prayers in Japanese.

Landing at Gaya after the short flight His Holiness was welcomed by the local District Magistrate, Superintendent of Police and senior officials, as well as the Kalon for Religious & Cultural Affairs, Ven Karma Gelek and the Kalon for Health, Chökyong Wangchuk, from the Central Tibetan Administration. Tibetans and other well-wishers lined the road to the Tibetan Monastery, where His Holiness retired for the night.