Wroclaw, Poland - His Holiness the Dalai Lama’s first full day in Wroclaw began with an interview by Piotr Krasko for TVN. The conversation touched on his having no fear of death and his sense that the unique Buddhist insight concerning the absence of intrinsic existence of self or phenomena had resulted in a reduction of his negative emotions. He also expressed conviction that through practice in life after life over millions of years it is possible to reach Buddhahood. He observed that the principal message of all the world's major religions is love. 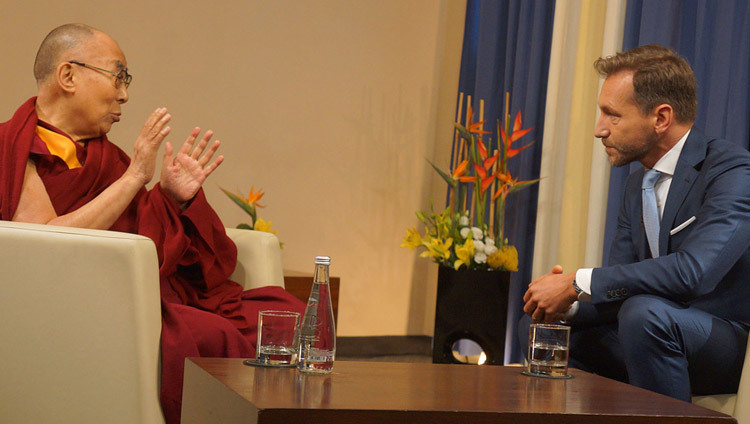 A question about the small boy depicted recently rescued from rubble in Syria reminded him that in Islam prayers are addressed to Allah the merciful and compassionate. He contended that as with other religious traditions the message of the Quran is love. He reported recently meeting with a group of young people from Africa and the Middle East, some of whom had determined in the immediate aftermath of bomb attacks to dedicate themselves to peace.

His Holiness suggested that young people may be induced to fight and kill for their faith when they are convinced that there is only one truth and one true faith and no sense of living in a world where the existence of several truths and a multiplicity of faiths is the reality. He advised that reaching out and listening to grievances would be more effective than trying to eliminate people by force. He recommended that education that includes universal values is the way to shape a better future.

A short drive through Wroclaw old town brought His Holiness to the City Hall, where, escorted by Mayor Rafal Dutkiewicz, he was welcomed to an event in a vaulted 13th century chamber. In 2016, Wroclaw, along with San Sebastian in Spain, is a European Capital of Culture. Before 200 guests, including Archbishop J. Kupny, councillors, rectors of universities, city authorities, consuls, directors of cultural institutions and honorary citizens of Wroclaw, the Mayor introduced His Holiness and offered him a gift representing freedom. 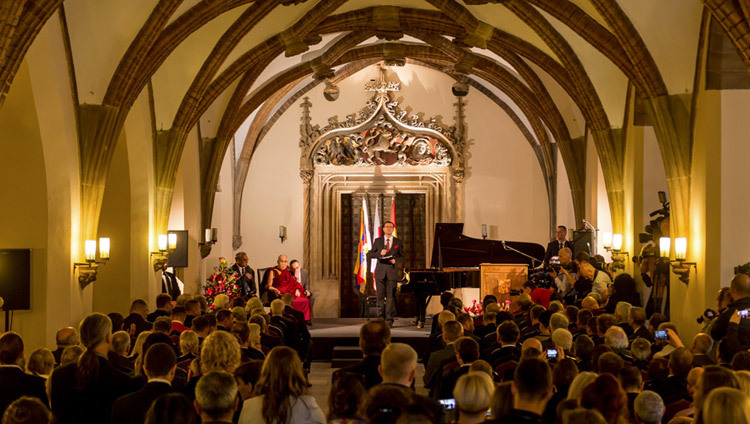 As part of the cultural programme, a group of Egyptian, Iranian and Kurdish singers gave a profoundly moving performance. Chairman of the City Council Jacek Ossowski expressed appreciation of His Holiness's presence among them on this special occasion and invited him to speak. Quipping that he usually prefers to speak standing out of respect, but on this occasion the cameraman had asked that he sit, His Holiness began:

"Brothers and sisters, wherever I go I consider myself just a human being, one of the 7 billion. We all want peace and joy, but we face a lot of problems, many of them of our own making. Where we stress differences of nationality, race, culture and religion we forget that at a deeper level we are all equally human beings. So I always emphasise our need to recognise the oneness of humanity and our need for solidarity. We need solidarity to ensure peace and freedom.

"As a Buddhist monk I don’t usually pay much attention to sensory pleasures like music, but I really appreciated the performance of these singers here just now. Listening to them I felt brought about a sense of solidarity among us, reminding us of the oneness of humanity and that the message of all our religious traditions is love, tolerance, forgiveness and self-discipline. This is why I believe that despite differences in philosophical outlook we are all spiritual brothers and sisters. “

There followed a spellbinding performance of Chopin by noted pianist Janusz Olejniczak that was enthralling to both the eyes and ears. 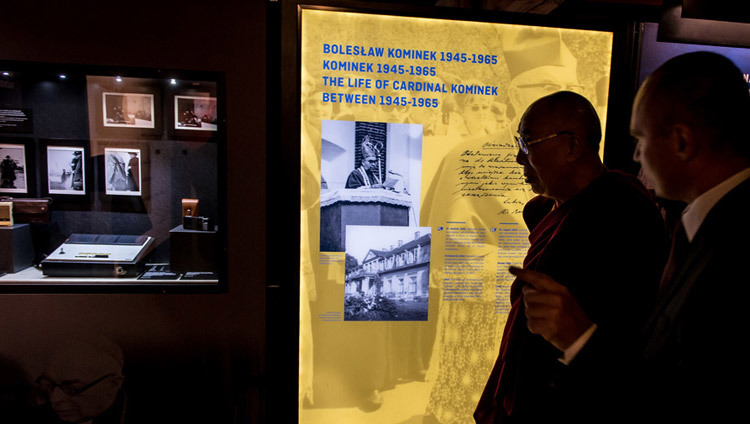 A short distance away from City Hall, His Holiness and the Mayor visited the City Museum of Wroclaw and viewed an exhibition, ‘Forgiveness and Reconciliation’ dedicated to Cardinal Kominek, an unrecognized father of Europe. In the course of the visit His Holiness interacted with a group of schoolchildren. Among them a young boy greeted him as a recipient of the Order of Smiles, an award given by children to adults distinguished in their love, care and aid for children, which he received in 1993.

Outside the museum, both His Holiness and the Mayor gave short speeches. His Holiness, recalling the great violence of the 20th century, urged that if the 21st century is to be different, in future solutions to problems must be sought through meaningful dialogue in a spirit of forgiveness and reconciliation. He repeated how impressed he is by the spirit of the European Union which places the common interest over narrower national interests. He asked his young listeners:

“What do you think? It will be you young brothers and sisters who can build a more peaceful world and it will be you who benefit from it. I don’t expect to live to see it.” 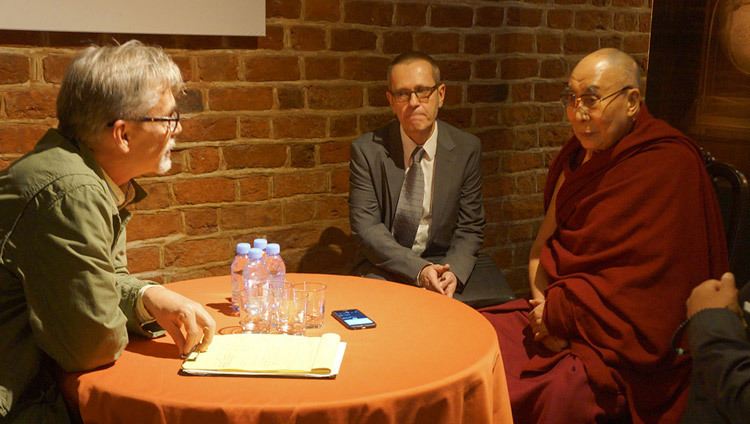 Back in the Museum, Jacek Zakowski (Polityka) interviewed His Holiness, asking him to compare his life as a refugee to those pouring into Europe. His Holiness stressed that the long-term solution is for peace to be restored to the lands these people are fleeing. In the short term, however, they must be given shelter. The children need education and the youth training that will equip them when they eventually return home to rebuild their countries. He pointed out that the prayer and aim of Tibetan refugees has always been to return to their homeland. Asked if that was the natural feeling of a refugee, His Holiness answered, “Yes”.

He talked about how problems developed in Tibet in the mid to late 1950s culminating in his escape to India and becoming a refugee. He reiterated that since 1974 Tibetans had decided not to seek independence and confirmed the support that their Middle Way Approach had received among Chinese writers and intellectuals.

Zakowski took issue with His Holiness’s position that it must be possible to reach out to terrorists, to listen to them and reason with them, stating that many people think it’s easier to kill them. “If you kill 100,000, will that solve the problem?” His Holiness retorted. “Won’t it just stoke more ill-feeling and provoke further violence? We have to use our intelligence and find a human solution. When scientists tell us that basic human nature is compassionate, that’s a source of hope.” 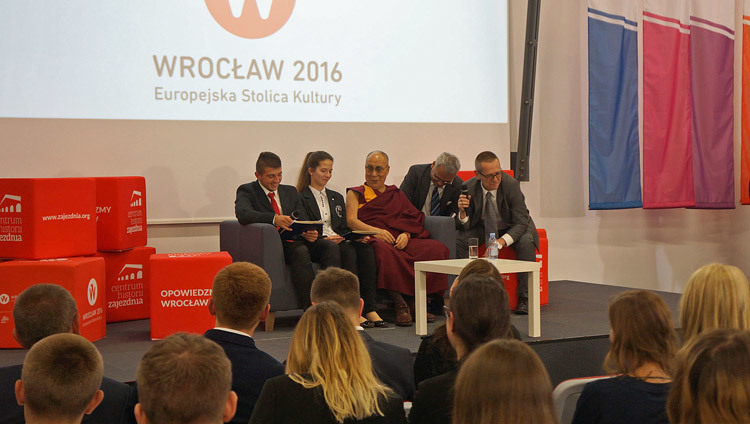 After lunch at the traditional Polish Pod Freda Restaurant, His Holiness visited the Depot History Centre, which opened just five days ago on the site of the 1980's Solidarity protests. Of the 250 people present most were students who welcomed His Holiness and invited him to speak before putting their questions to him.

“Young brothers and sisters, it’s important to remember what we have in common physically, mentally and emotionally as human beings, because today humanity is facing an array of problems. None of us want problems and yet we seem to bring them about through short-sightedness, focussing only on one aspect rather than looking at the whole reality. We need to use our intelligence to the full and take a wider perspective. Instead of being despondent, it’s important to keep your spirits up and work for justice and freedom.”

His Holiness told them that he’d come again to Wroclaw because his friend the Mayor had invited him. Of people who have impressed him he mentioned Solidarity leader and Nobel Peace Laureate Lech Walesa, but also included scientists. He said it was scientists, for example, who warned of climate change that has become such a threat.

The students and local Solidarity representatives presented him gifts and the students requested him to write in their memorial book. His Holiness posed for photographs with the audience before returning to his hotel.