Zurich, Switzerland - His Holiness the Dalai Lama was met on arrival at the Grossmünster Church this morning by Pastor Christoph Sigrist, who introduced him to representatives of the Evangelical Church, Hinduism, Judaism, Islam and the Roman Catholic Church. The Church was packed with about 1000 people as the religious representatives entered together. Once they were seated the building resounded to a Bach toccata played on the organ. 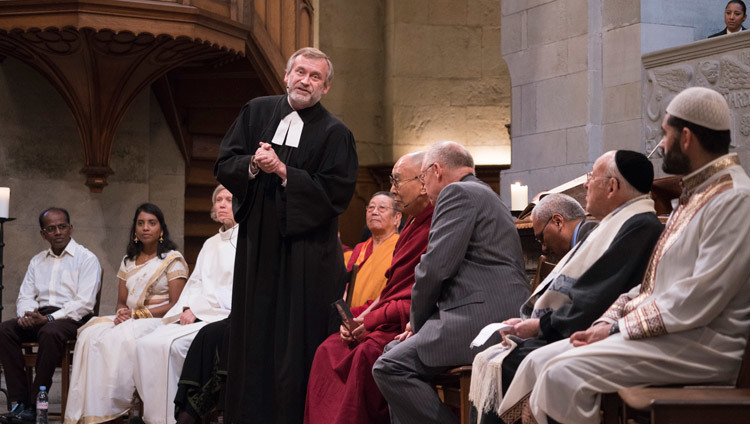 Addressing the gathering Pastor Sigrist said it was an honour and a great joy to welcome ‘Our Brother’, His Holiness the Dalai Lama to the Grossmünster Church. “It means a great deal to have you here to pray and reflect with us,” he said. Each of the religious representatives was invited to make a prayer beginning with Tibetan Buddhist monks from Rikon Monastery. His Holiness joined them in their melodic chanting as their prayers for taking refuge and cultivating bodhichitta filled the church. They were followed by the Imam, the Rabbi and women representing Hinduism, the Protestant and Roman Catholic Churches, each praying in their own way for peace and justice among humanity. Finally, the Church rang with the pure voices of the choir singing Heinrich Schütz’s ‘Grant us peace graciously’.

Mario Fehr, an old friend of Tibetans, who is now President of the Canton of Zurich said, “On behalf of the Canton Government and the people of Zurich, I am very thankful that you are all here and that you have joined us to pray for peace today.”

Invited to address the congregation that included another 700 or so watching a monitor outside, His Holiness began:

“Spiritual brothers and sisters, I’m very touched by the atmosphere here with leaders and followers of different faiths gathered to pray together. It’s a great opportunity for us to get to know each other. 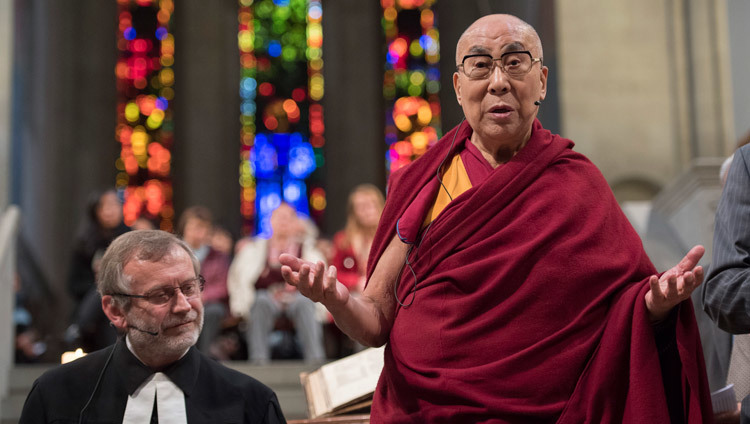 “At this very moment we are praying peacefully together here, but in other parts of the world, people are being killed and are being killed in the name of religion. These days if a person is killed by an elephant or a tiger it makes the news, but when people kill other people it seems routine and hardly seems to register.

“Nevertheless, scientists are finding evidence to conclude that basic human nature is compassionate. We depend on each other for our survival. In terms of the threats we all face from climate change, national boundaries have no meaning. Looking at our small blue planet from space no such boundaries can be seen. This is the reality today. We have to think of the welfare of all humanity.

“I have a commitment to promoting happiness through understanding. We human beings are physically, mentally and emotionally the same. We all want to live a happy life, but too often our strong sense of ‘us’ and ‘them’ causes divisions among us. We need instead a sense of the oneness of humanity. All the major religious traditions convey a message of love, tolerance, forgiveness and self-discipline. They all have the potential to bring peace through the cultivation of warm-heartedness. They adopt different philosophical positions, but their purpose is to foster greater love and affection for others. Their common aim is to create more compassionate people.”

His Holiness explained that his second commitment, as a Buddhist monk, is to encouraging religious harmony. He mentioned Thomas Merton, Mother Teresa and other Muslim and Hindu friends who have deeply impressed him, people driven by the dedication of their faith. He emphasised the need to create harmony and respect among religious people. Recalling the first World Day of Prayer for Peace in Assisi, Italy, in1986 that he attended at the invitation of Pope John Paul II, His Holiness reported expressing his appreciation to the Pope and telling him how important it was for it not to be a one-off event, but for it to happen again and again. 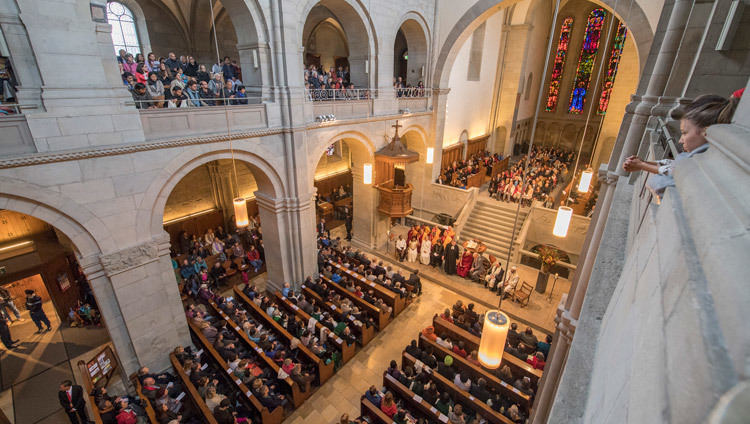 He mentioned too how important it is for followers of different religions simply to get to know each other. Similarly, he said, scholars and religious leaders should meet to discuss and exchange their experiences. For example, in discussions with Muslim scholars in India and elsewhere, His Holiness has learned that if Muslims commit bloodshed they are no longer proper Muslims. Their commitment is to extend love to all the creatures of Allah. The same scholars have also explained that ‘jihad’ actually refers to a struggle within to tackle our disturbing emotions.

His Holiness suggested a third practice he follows to promote religious harmony—making pilgrimage to other people’s places of worship. He said he started doing this in Varanasi, India, in 1975 and has since visited Jerusalem to pray in the company of Christians, Jews and Muslims. Similarly, he recalled joining visiting Christian sisters and brothers, local Hindus and Muslims under the Bodhi tree in Bodhgaya, the site of the Buddha’s enlightenment, for half an hour’s silent meditation.

Observing that all the world’s major religious traditions, those that are indigenous like Hinduism, Buddhism, Jainism and Sikhism, and those from abroad like Zoroastrianism, Judaism, Christianity and Islam, have lived together in India, side by side, in respect and harmony, for centuries. This, he said, is an example for others to follow. 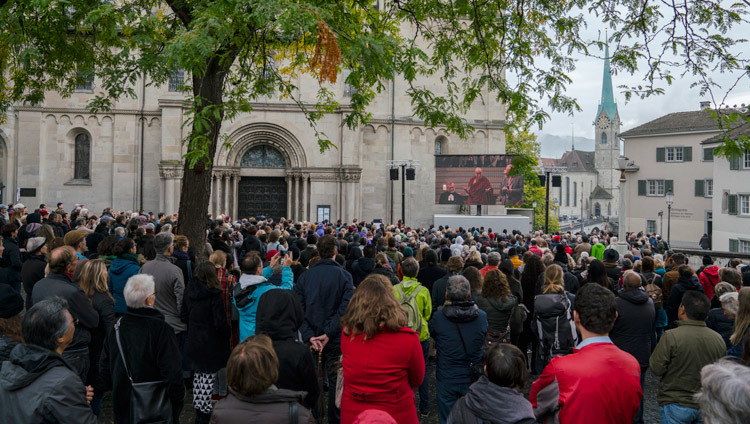 “Finally, if may say so,” His Holiness remarked, “I wonder how appropriate it is for us to pray to God or to Buddha for peace when the problems and conflict were created by us. I wonder if we were to meet Jesus Christ, the Buddha or Muhammad, if they might not ask, ‘Who created these problems you are seeking help to resolve? Isn’t it your responsibility to sort things out?’

“I feel we should make a personal commitment to promoting inter-religious harmony and to cultivating compassion within ourselves. If we also discuss this with friends and family, we can spread these ideas. In our materialistic world money seems all important, but much more valuable if we want to lead a happy life is to cultivate warm-heartedness. This is what strengthens the inner peace that anger and jealousy so easily destroy. Paying more attention to our inner values will ensure we’re healthy in body and mind and can make a real contribution to peace in the world.”

Pastor Sigrist thanked His Holiness for his words and called on all present to join in saying St Francis of Assisi’s Prayer for Peace:

O Divine Master, grant that I may not so much seek
To be consoled as to console,
To be understood as to understand,
To be loved as to love;
For it is in giving that we receive;
It is in pardoning that we are pardoned;
It is in dying to self that we are born to eternal life, Amen

He announced that Syrian refugees had been offered shelter in apartments attached to the church and that they had prepared a lunch for the religious leaders, representatives and guests.

Towards the end of the meal, President Mario Fehr presented Zurich’s Gold Medal to His Holiness as a mark of appreciation.

Tibetans thronged the cobbled streets outside the church to see His Holiness off as he drove to Zurich airport. From there he flew to Bratislava, capital of Slovakia, where he was met on arrival by old friends Suzanne and Csaba Kiss of the At Home Gallery and Martin Butora, advisor to the President of Slovakia, and his wife. Tomorrow, His Holiness will interact with students and faculty at Komensky University in the morning and give a public talk in the afternoon.