Inauguration of the Dalai Lama Institute for Higher Education December 14, 2016

Bengaluru, Karnataka, India, 14 December 2016 - When His Holiness the Dalai Lama arrived early at the Dalai Lama Institute for Higher Education this morning, the cyclone affected weather of the last few days had begun to improve. 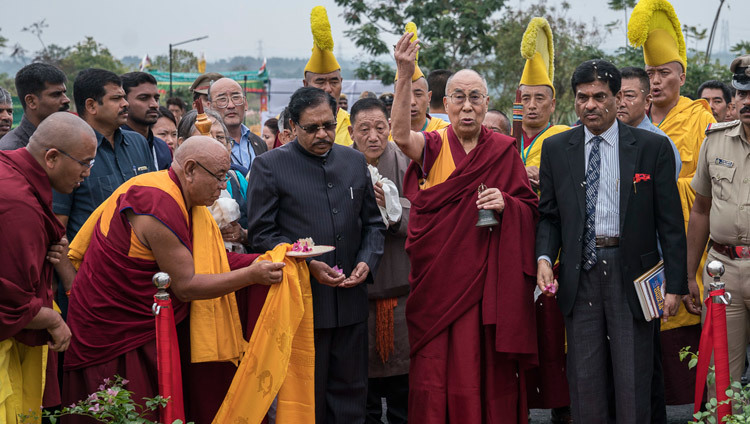 Once the other guests had arrived, he walked with them to where a ceremonial ribbon had been set up. With monks from Gyumey Tantric College supporting his chanting of auspicious verses, His Holiness joined hands with Karnataka Home Minister, Dr G Parmeshwar and University of Mysore Vice-Chancellor KS Rangappa to cut the ribbon and symbolically open the Institute.

All then took their places on the dais, facing students and staff assembled on the grassy slope in front of them. Everyone’s attention was captured as a young man from eastern Tibet sang in haunting traditional tones evoking the openness and freedom of the rolling Tibetan grasslands.

Principal of the Institute, Dr B Tsering spoke first, explaining that one of its aims was to train people to become competent and capable leaders. She said seed money from the Dalai Lama Trust had enabled the initial establishment to take place, which had in turn attracted further support from other friends. She clarified that entrance to the Institute was open to local Indian students as well as Tibetans.

She explained that since 2013, the Institute has had the strong and active support of the University of Mysore, but what was unique was the Institute’s ability to continue to function in Tibetan. Indeed, students can engage in study not only of Tibetan and English language and literature, but Chinese language and literature too. The latter courses have been taught by volunteers from Taiwan.

Besides their academic goals, there is an active move to encourage students to cultivate universal values, engage in team work and show a sense of responsibility for the welfare of others.

The Principal was pleased to announce that a request to set up a research centre received approval two days ago with the result that PhD and Masters programmes in Tibetan studies can go ahead. She concluded by expressing gratitude that the Institute has excellent infrastructure and a dedicated young faculty.

Dawa Nawa gave a report on progress in construction in Tibetan.

Prof KS Rangappa, Vice-Chancellor of the University of Mysore, declared that it was a blessing to attend the auspicious occasion of the inauguration of such a special Institute. He said that besides their academic aspirations, students will also be able to study the art and science of living. He stressed the importance of preserving Tibetan culture and language.

Minister for Education of the Central Tibetan Administration, Ngodup Tsering, speaking in Tibetan, gave an impassioned talk about aspirations and shortfalls in the contemporary Tibetan education system, which was not translated. He made a point of thanking both the Government of India and the Government of Karnataka for their long-standing, generous and consistent support for the education of Tibetans. 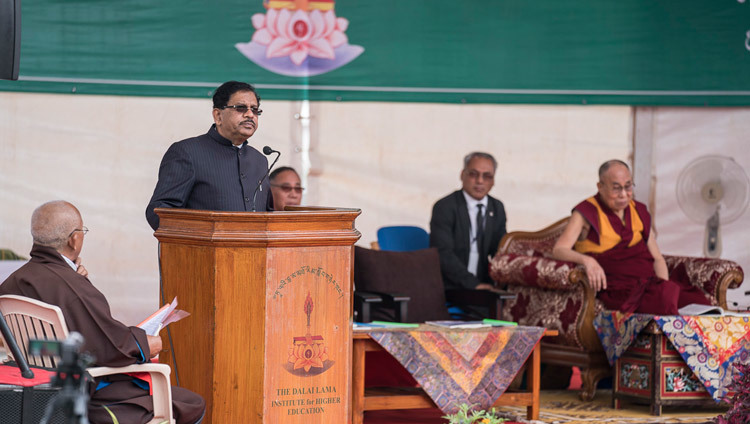 Dr G Parmeshwar greeted all the dignitaries, fellow guests and students, declaring that he represented the Government of Karnataka and conveyed the greetings of the Chief Minister. He recalled that after His Holiness arrived in India in 1959 with nowhere to go, Karnataka offered support. Later, in 2009, he attended the His Holiness’s laying of the foundation stone of the Institute and now celebrated the progress that has been made since then. Stating that education is a tool for development both of the individual and society, he reassured students and staff once again that the Government of Karnataka is with them.

His Holiness began by greeting all present on the auspicious occasion of this inauguration. He also thanked those who had already spoken for their reports and advice.

“I first came to Karnataka in 1956,” he said, “and even then Mr Nijalingappa showed real concern about what was happening in Tibet. When we escaped to India in 1959, he was the most generous of the Chief Ministers who responded to Prime Minister Nehru’s plea for land on which to settle Tibetan refugees. I really appreciate the way the Karnataka Government has continued to support us in the same spirit down the years.

“When we came into exile, preserving our identity, language and culture was our priority. These days, when Tibetans in Tibet reveal their passion likewise to preserve their culture, hardliners oppose it as indicative of their ‘splittist’ motives. Despite restrictions, Tibetans’ spirit remains resolute.

“Relations between India and Tibet have for long been characterized as those between a Guru and chela or master and disciple. When we think of what we have received from India, we feel very close. Of course, Indians on the whole revere Shiva, and while his abode at Mt Kailash is located in Tibet, the Lord Buddha, the founder of Buddhism, and subsequent masters were all Indians. What’s more, the Ganges River so sacred to India has its source in Tibet.”

His Holiness noted the importance in India and Tibet of upholding the five major and five minor sciences among which he counts understanding of the workings of the mind and emotions. He said that in a world where many of the problems we face are of our own making, we need to tackle the destructive emotions that prompt them. This entails becoming familiar with the way the mind and emotions function. Since the necessary instructions are available clearly and accurately in Tibetan, preserving the language is important. He also emphasized the importance of employing reason and logic, which is only found in the Tibetan Buddhist tradition. The Buddha himself advised:

O monks and scholars,
As gold is tested by burning, cutting and rubbing,
Examine my words thoroughly
And accept them only then—not just out of respect for me.

“In the 60s, as I said, we were concerned simply to preserve our traditions,” His Holiness reiterated. “Now we can serve humanity by sharing the benefits of ancient Indian knowledge with others. This is something you young people studying today can do. Think not only of the interests of Tibetans but of the whole of humanity. We regularly pray for the welfare of all sentient beings and, while there may be all kinds of beings in other parts of the universe, the 7 billion human beings alive on this planet today are the ones we can directly engage with.” 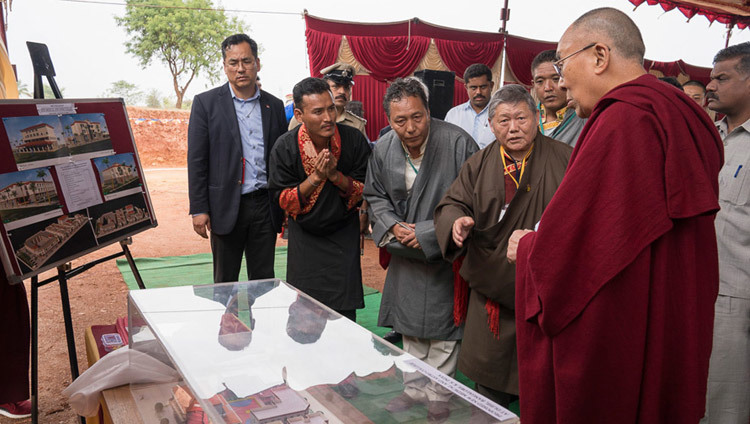 An extensive vote of thanks was followed by lunch.

His Holiness visited an adjacent piece of land earmarked for a branch of the Men-tsee-khang, the Tibetan medical institute, before leaving for Bengaluru. He unveiled the foundation stone and recited auspicious verses. Thanking friends and sponsors present for their interest in the Tibetan medical tradition, he noted that it was an indication of its value that in Tibet, when so much else was being destroyed, this survived. Chinese officials consult Tibetan physicians and take Tibetan medicine.

“Since Tibetan medicine has absorbed many influences in the past, such as Ayurveda, the Yunani system and Chinese medicine, it’s appropriate that now it should be open to modern science too,” His Holiness said. “Tibetan medicine is not only one of the ways in which Tibetans can contribute to the welfare of others, it shows that, whatever Chinese hardliners may think, Tibetans were not that backward.”

His Holiness joined medical students as they chanted prayers for the flourishing of Tibetan medicine.