In a message to young Mongolians, His Holiness said,

“Tibet and Mongolia have had friendly relations for more than 1000 years, especially since we embraced Buddhism. Despite the material development we see in the world, people still lack peace of mind. These days we also see conflict in the name of religion. At such a time, it is important to work to ensure international peace. 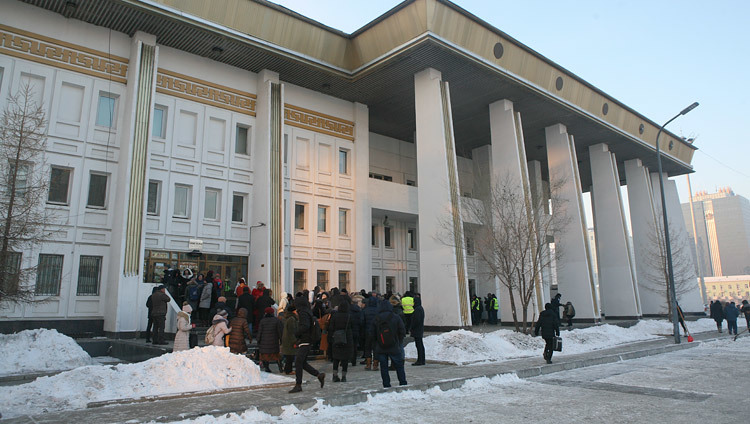 “I have visited many western countries and even in these highly developed societies people are unhappy. This is why, these days, there is such interest in what Buddhism has to say about the workings of the mind.

“Mongolia has historically been a Buddhist country. Under communist rule, despite great difficulties, you were still able to preserve your religious faith. Now that you are free once more, there is growing interest in your Buddhist heritage, especially the Nalanda tradition. You need to build on this interest.

“Even those without much interest in religion as such can benefit from what the Nalanda tradition has to teach. However, most of you have a fervent faith, so I appeal to you to make an effort to study the Nalanda tradition. In the monasteries, younger monks should not only learn how to perform rituals and prayers, they should also study hard.”

Asked what changes he has noticed in Mongolia since his last visit in 2011, His Holiness replied:

“Of course, I can see that externally there has been a great deal of development, many more houses have been built. However, whether the inhabitants of these houses have a deeper sense of peace of mind is another matter. It is quite clear that material development alone is not sufficient to bring us inner peace. This is why today in America, Europe, Japan and China, many people, including scientists, are showing increasing interest in the workings of the mind.

“Mongolia has historically been a Buddhist country, upholding the Nalanda tradition for more than 1000 years. You should not just take this for granted, but should make an effort to study yourselves. I believe Mongolia has great opportunities ahead. You are witnessing great material development, but your ancestors have also bequeathed you this great Buddhist tradition. Buddhist Psychology is very advanced and it is something that already belongs to you. Today, you have an opportunity to be the bridge between the Buddhist traditions of Nalanda and modern education.” 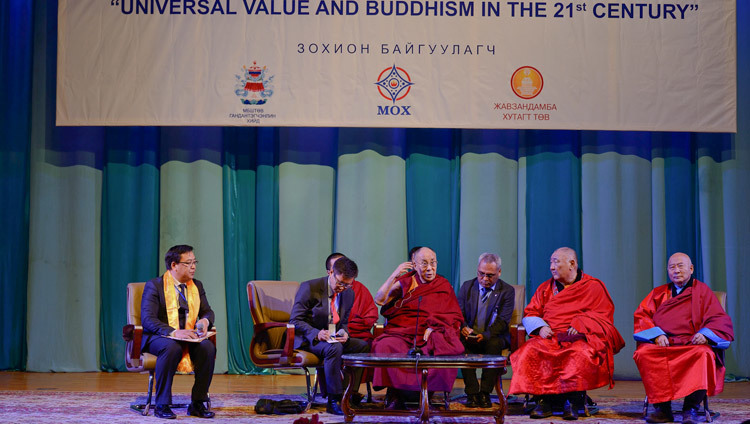 Speaking publicly about ‘Universal Values and Buddhism in the 21st Century’ His Holiness outlined his three commitments. The first involves the promotion of human happiness and peace in the world, the key to which is inner peace. He stressed that peace of mind is important if we are to be physically healthy. If we want to create a happier more peaceful world, we need to take inner peace seriously. We do not necessarily have to cultivate religious practice, we can rely on our common experience common sense supported by scientific findings.

“Cultivating compassion and inner peace is not the preserve of any particular religious tradition; it is rooted in universal values,” His Holiness advised. “Time is always moving forward so we cannot change the past. However, we can shape the future. During the 20th century more than 200 million people died violently. If that violence had ultimately left the world a better place, we could perhaps justify it, but that is not the case. The reality today is that we are so interdependent that war and the use of force is thoroughly out of date. 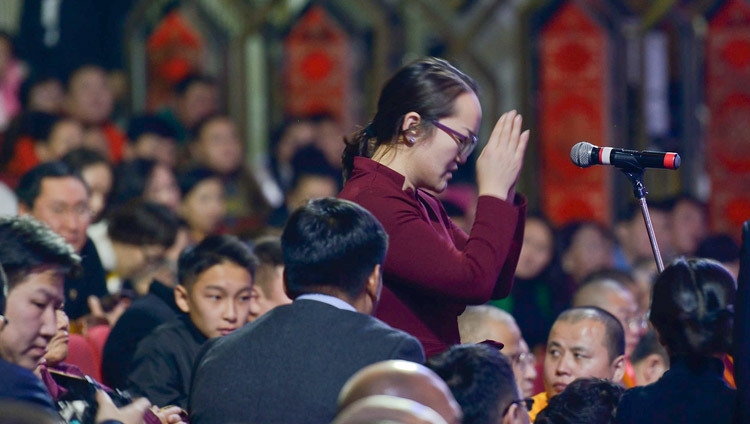 “We must act according to the new reality in which we find ourselves. The idea of complete victory for one side and the complete defeat of the other is entirely unrealistic. Taking an unrealistic approach yields no positive results. We have to remember that each and every one of us belong to the 7 billion human beings alive today. Considering the welfare of the whole humanity ultimately ensures our own benefit. Narrow selfish concern is unrealistic. Real happiness involves concern for others. Where the 20th century was fraught with bloodshed and conflict those of you who belong to the 21st century should cultivate a sense of the oneness of humanity and work to ensure this century becomes an era of compassion. If you can do that you’ll experience a happier world.”

After lunch where he was staying, His Holiness met members of the Tibetan community in Mongolia as well as the many Mongolians who came to see him.

Tomorrow His Holiness returns to Japan where he will take two days’ rest before giving a public talk in Saitama.