New Delhi, India, 10 December 2016 - At daybreak Delhi was shrouded in thick fog, which gradually lifted as the sun rose. By the time His Holiness the Dalai Lama drove to the Rashtrapati Bhavan Cultural Centre, within the residential complex of the President of India, the day was looking bright. He had been invited to participate in the opening session of the inaugural Laureates and Leaders for Children Summit organized by the Kailash Satyarthi Children’s Foundation. Once the Honourable Shri Pranab Mukherjee, the President of India, arrived, the summit began with the purpose of globalizing compassion for children. 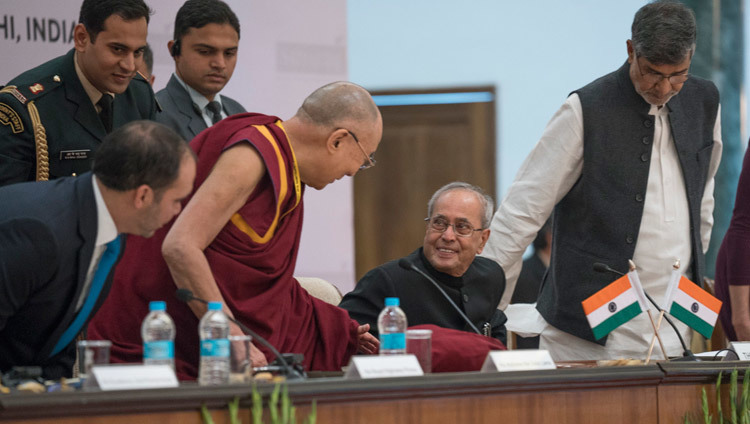 In his opening remarks, Kailash Satyarthi, who was awarded the Nobel Peace Prize in 2014 for his work to free and uplift children, said he was humbled and privileged to welcome everyone who had come to attend this first such summit in India.

“Never before has the world been more conflicted,” he said. “Millions of children are enslaved, trafficked and deprived of education—this is unacceptable. We need resolutions that are innovative and inclusive. When I told stories of child slavery in Oslo, many found them hard to believe.

“By gathering laureates and leaders in this summit we will together turn the tide in favour of the most marginalised children. Sisters and brothers, children are the voice of change, we must listen to them.”

Invited to give the keynote address, Shri Pranab Mukherjee, the President of India, alluded to the diversity that flourishes in this country. He also noted that a convention has arisen that the Nobel Peace Prize is awarded on 10th December, which, since 1948 has been Human Rights day.

“Children have to take centre stage,” he declared. “We have to overcome the inequality the leaves children underprivileged. We have to make a commitment to their development and security. We should correct disadvantage and equalize opportunity through education. Let us make this planet a better habitat for our children.”

When it came to his turn to speak, His Holiness acknowledged the President and his fellow honoured guests, but addressed those assembled as brothers and sisters as he usually does, saying:

“I really believe we are all the same as human beings, irrespective of our nation, belief or rank. We are all born the same way, we all depart the same way. Many of the problems we face are of our own creation. But because we have given rise to them, it is within our power and responsibility to solve them too. To come together to do that we need compassion rooted in a sense of concern for others’ well-being on the basis of our all belonging to one human family. 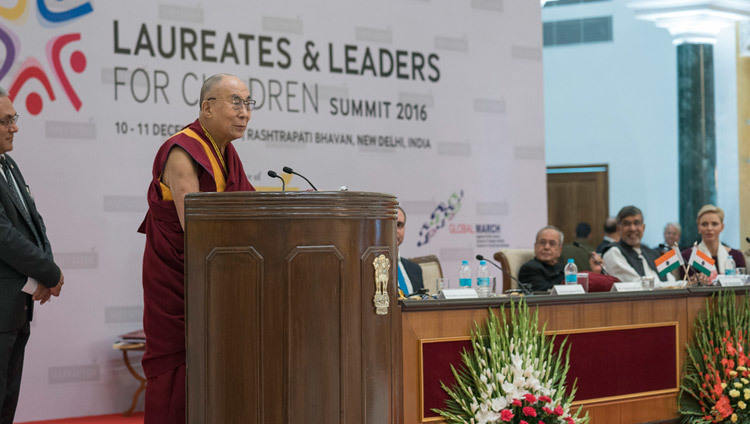 “Since the 20th century was a period of violence, we should ensure that the 21st century is an era of peace. But how can we bring this about? Through prayer? I’m a Buddhist monk, I pray. But when it comes to changing the world, I’m sceptical about whether we’ll do it by prayer alone. Peace in the world derives from individuals having achieved inner peace. Anger may be part of our lives, but if we analyse what value it has, we’ll find that it disturbs our inner peace and almost always leads to negative consequences.

“Scientists say that constant anger, fear and hatred consume our immune systems, so if we’re looking for good health, we need to cultivate peace of mind. Education is a contributory factor, but our existing education system tends only towards materialistic goals. Those who have been through it have a materialistic outlook and a materialistic culture, with little regard for inner values. The source of trouble is within ourselves—our disturbing emotions. We have to learn how to tackle them.

“The President here and Kailash Satyarthi like me belong to the 20th century, a time that is gone. Those of you who belong to the 21st century, who are now 30, 20 or 15 years old, are our source of hope. If you make the effort, later in the century the world may be a happier, more peaceful place.”

His Holiness continued on the theme of peace of mind, the source of which he said was warm-heartedness. If our hearts are warm, he went on, then everyone we meet will be like a sister or brother. This is how children are: natural, accepting and inclusive of each other. It’s only as they grow up that they begin to see others in terms of ‘us’ and ‘them’.

Princess Charlene of Monaco, a former Olympic swimmer, has campaigned to prevent drowning, which otherwise takes many children’s lives. Having been born in Rhodesia, but grown up in South Africa, she quoted Nelson Mandela who said, “We owe our children a life free from violence and fear.”

Prince Ali bin Al Hussein of Jordan congratulated Kailash Satyarthi on convening the summit. He asked why today we see so many child refugees being turned away and advised,

“We owe it to our children to do more, better and faster.” 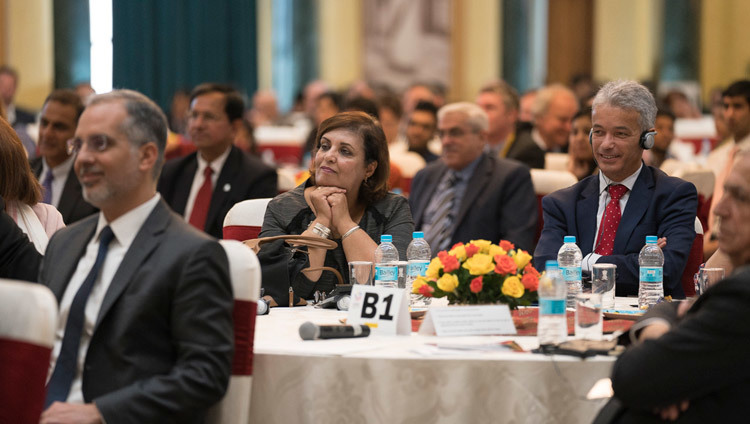 Princess Laurentien of the Netherlands said it is our duty to protect children in any way we can. She mentioned that according to existing treaties children specifically have 54 rights.

“I’m sorry,” she said, “that the wealthy and powerful are so comfortable they feel no sense of urgency to act.”

Jose Ramos Horta, former President of Timor-Leste stated that child labour and slavery are indictment of us all. But, he added, some countries are too poor to change the pattern.

“We need to find ways for every child to be free and able to go to school. We the children have questions. I bring them to you. How much longer do we have to wait?”

Those assembled broke into groups for round-table discussions. The conversation His Holiness took part in focussed on compassion in business. He suggested that many businesses begin with a good motivation, but that gradually breaks down. He reiterated that simple warm-heartedness is a basis for serving humanity. “If you have a warm heart, you’ll be able to use your human intelligence in a proper, positive way.”

The session broke for a sumptuous lunch served on the lawns behind the building. Many delegates from different parts of the world took the opportunity to introduce themselves to His Holiness and take selfies with him. When the meal was over, he returned to his hotel.