Observing the International Day of Peace at the Church of Peace, Swidnica September 21, 2016

Wroclaw, Poland - More than thirty Tibetans and Mongolians living or studying in Poland came to see His Holiness the Dalai Lama before he left for his day’s engagements. He spoke to them briefly:

“Tibet is known as the Roof of the World, but also as the Land of Avalokiteshvara. We Tibetans have our own language, with its own writing, which is the best medium for accurately explaining Buddhist teachings. In the past some Tibetans were shy of saying they were from Tibet—not any more. We have every reason to be confident. We have the seed of compassion and we need to strengthen it through reason and training.

“Our Kangyur and Tengyur collections contain a wealth of knowledge about Buddhist science, philosophy and religion. We have published a Compendium of Science in a two volume set and one abridged volume. These books are being translated into other languages like English, Chinese and German. When you have time, try to read them and discuss among yourselves what you learn.”

Turning to the Mongolians he recalled how Buddhism had first come to Mongolia on the Silk Road. Later, in a second phase of transmission, Drogön Chögyal Phagpa brought Buddhism from Tibet. This was consolidated when the Third Dalai Lama, Sonam Gyatso, went to Mongolia.

His Holiness said that he first visited Mongolia in 1979. And on that occasion the monks at Ganden Thekchenling offered him a Long-Life Prayer so fervently it brought tears to the eyes of all concerned. He observed that the 13th Dalai Lama not only spent time in Mongolia, but was also able to speak Mongolian. Relations between Tibet and Mongolia have a history of being close. His Holiness mentioned that his interest in emptiness, which he has reflected on seriously for the last 60 years, owed not a little to his Mongolian debating assistant, Ngodup Choknyi. Driving about an hour and a half out of Wroclaw through rich farmland brought His Holiness and his party to the town of Swidnica and the historic Church of Peace, named after the Peace of Westphalia of 1648. This permitted Lutherans in the Roman Catholic parts of the region to build three churches from wood, loam and straw outside the city walls, without steeples and church bells. They were permitted one year to complete construction.

The Peace of Westphalia was a series of peace treaties signed between May and October 1648 effectively ending the European wars of religion—the Thirty Years' War (1618–1648) in the Holy Roman Empire, and the Eighty Years' War (1568–1648) between Spain and the Dutch Republic. The treaties did not restore peace throughout Europe, but they did create a basis for national self-determination and the concept of co-existing sovereign states, which became central to international law as it prevails today. The church is listed as an UNESCO World Heritage Site.

As he stepped out of his car, His Holiness was received by Bishop Waldemar Pytel and Mayor of Swidnica, Mrs Beata Moskal-Slaniewska. They escorted him to his seat to the music of Handel played on the organ. Mayor of Wroclaw, Rafal Dutkiewicz explained to the congregation that today, 21st September was the International Day of Peace and that the distinguished religious leaders present, including His Holiness the Dalai Lama, had been invited to sign an Appeal for Peace. He mentioned a number of recent alarming circumstances that prompted the need for such an appeal. Among them he mentioned the heavy defeat of Chancellor Angela Merkel’s Christian Democrat Party in elections in Berlin by the right-wing, anti-migrant party Alternative for Germany; North Korea’s recent conducting of a fifth nuclear test and Russia’s annexation of Crimea.

Dutkiewicz also mentioned several reasons why this Church of Peace was a fitting location for such a gesture. Apart from its older history, it was here in 1989 that German Chancellor Helmut Kohl met Tadeusz Mazowiecki, Poland’s first post-Communist Prime Minister. More recently, in November 2014, Polish Prime Minister Ewa Kopacz and German Chancellor Angela Merkel came here as part of celebrations of the 25th anniversary of the Mass of Reconciliation in Krzyzowa.

Prior to the signing of the Appeal for Peace, His Holiness was invited to address the gathering. 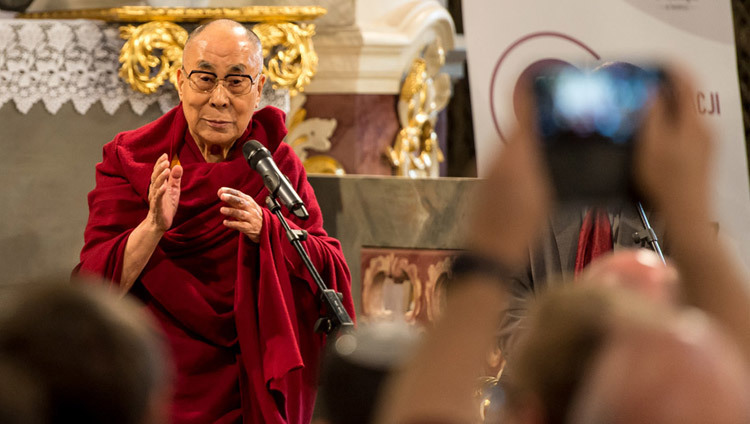 “Respected spiritual leaders and brothers and sisters,” he began. “It’s a great honour for me to come here to join in this celebration of peace. Peace is something that must arise through inner peace. It cannot be built on the basis of destructive emotions like fear and anger.

“Nowadays, some scientists say that basic human nature is compassionate. When we’re born, if our mother was full of anger, we would not survive. The way life starts is characterised by affection and it’s time we paid more attention to this.

“Despite philosophical differences, all our major religious traditions convey a common message of love. Sadly however, we are seeing today conflicts arising in the name of religion. Consequently, we need to make special efforts to promote harmony between our traditions based on mutual respect. I’m a Buddhist monk, but among Buddhists are many who don’t take their practice very seriously. They may adopt a serious demeanour when they come to the temple, but this doesn’t extend into their day to day lives. Whether we are Buddhist, Christian, Jewish, Muslim or Hindu, if we think of ourselves as religious, we should make our faith part of our daily life. Not only should we be compassionate in our conduct, we should be happy. “I have three commitments I’d like to share with you. The first is to promoting human happiness and the sense that we are all equally human beings. The second is that, as a Buddhist, I try to encourage inter-religious harmony. I have friends who say they think of me as a good Christian or a good Muslim. Finally, I’m a Tibetan and you have already referred to the issue of Tibet—thank you.”

His Holiness observed that peace will not come about as a result of prayers alone. Logically, since it’s human beings who have disrupted the peace, it’s they who have to work to restore it. And even if they do that, he said, it doesn’t mean no further problems will occur, but when they do they have to be solved in ways other than the use of force.

“Yesterday, I visited the exhibition at Wroclaw Museum dedicated to Cardinal Kominek’s work to foster forgiveness and reconciliation. On the way here, as I thought about that, I looked out on the rolling fields and reflected on how the Polish people have suffered and worked hard to rebuild their lives—wonderful.”

The moderator then requested the respective spiritual leaders to come forward to sign the Appeal for Peace, which read: ‘We have gathered here in this unique place, in this truly amazing region where people of many nations and cultures have successfully co-existed despite their different beliefs and religions. To commemorate this exceptional meeting we unite in our appeal for global peace, irrespective of beliefs, origin or religions. Peace that will always prevail as long as there is understanding and love of one another.’

Having signed they lined up together as a group for photographs to be taken before filing out of the church and gathering in the Church of Peace café for lunch. During conversation in the course of the meal, His Holiness repeated the importance of religious people getting to know one another on occasions such as this. “Since there are approximately 1 billion Christians in the world, 1 billion Muslims, 600,000 Hindus, 400 million Buddhists and 14 million Jews,” he remarked, “we have to live together. We should learn to talk about what we admire in each other as well as what we might want to complain about. Now, let’s eat.”

Bishop Ignacy Dec invited His Holiness to visit his church in Swidnica, which he did briefly on the way, before driving back to Wroclaw. Arriving at the hotel, His Holiness gave interviews to CBS Sunday Morning and Good Morning Britain (ITV) in connection with the forthcoming publication of ‘The Book of Joy’ based on conversations he held with his old friend Bishop Desmond Tutu.

Tomorrow, His Holiness departs for India and a return to Dharamsala.