Participation in 97th Convocation of the University of Mysore December 13, 2016

Mysuru, Karnataka, India - Yesterday morning, His Holiness the Dalai Lama left Delhi on an early flight for Bangaluru from where he flew on to Mysuru. He was received on arrival by the local Deputy Commissioner & District Magistrate and Superintendent of Police, as well as the Abbots, Settlement Officers and Tibetan People’s Deputies from Mundgod. When he reached his hotel, among hundreds of ordinary Tibetans there to welcome him, a group of schoolchildren performed the ‘Tashi Shölpa’ dance in his honour. 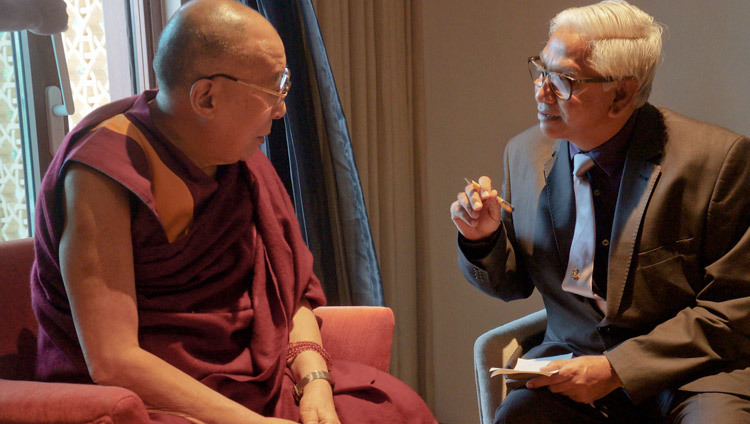 This morning, before venturing out into the ubiquitous drizzle enveloping the city as a result of cyclone Varda, His Holiness gave an interview to veteran ‘Star of Mysore’ journalist N Niranjan Nikam. He told him that he first came to Mysore in 1956 during a visit to India to attend the 2500th Buddha Jayanti celebrations. In the course of a ceremonial lunch, the then Chief Minister of Mysore State, S Nijalingappa, told him that he supported Tibetan independence.

Eventually, after his escape to India in 1959, followed by about 15,000 Tibetans, a request was made to the Government of India for land on which they could settle. Pandit Nehru wrote to the country’s Chief Ministers with this request and Nijalingappa’s response was by far the most generous. Consequently, today, 40-50,000 Tibetans live in Karnataka, but more important, His Holiness said, Tibet’s major monastic universities have also been re-established here.

Nikam asked His Holiness what he feels is wrong with modern education. He told him that being primarily oriented to material goals there is little place in it for inner values and moral principles. He observed that many of the problems we face today that are of our own making can ultimately be attributed to this lack of moral principles. He suggested we could make up for this by cultivating warm-heartedness.

“Scientists have found evidence that basic human nature is compassionate,” he said, “which is a source of hope. So one of education’s functions should be to strengthen this.”

His Holiness clarified for Nikam that since 1974 his goal has not been independence for Tibet, but to assert those rights mentioned in the Chinese constitution and in the ‘17 Point Agreement’.

“Sometimes things seem more hopeful and at other times less.” he remarked, “Under Hu Yaobang’s leadership, there was hope, but he fell from favour. Right now we have no direct contact, but the spirit of Tibetans in Tibet remains strong. Even the younger generation are remarkably resilient. Once the Tibetan issue has been resolved, the problems with Taiwan, Hong Kong and what the Chinese call Xinjiang will be more easily addressed and China’s international image will improve.”

Noting that His Holiness has met a great number well-known people around the world, Nikam asked who had most impressed him. His Holiness paused before mentioning India’s first President, Dr Rajendra Prasad, who he admired for his humility and authentic spiritual propensity despite his high office, Nehru, Nijalingappa and, more recently, President Obama. 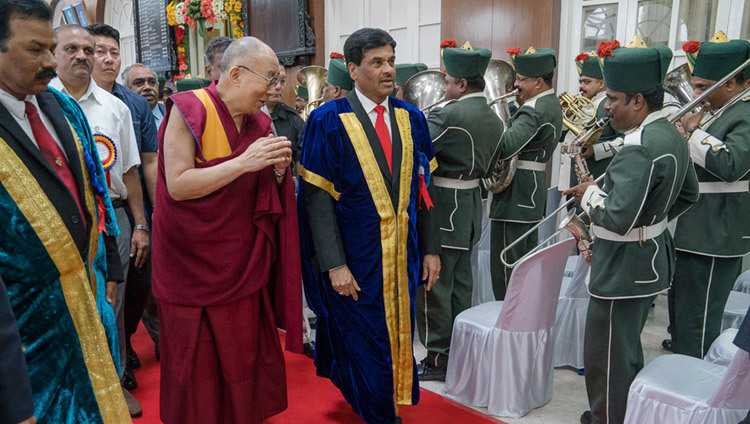 A relatively short drive through Mysuru’s wet streets brought His Holiness to the University of Mysore. Vice-Chancellor, KS Rangappa, received him and escorted him to his office to the spirited accompaniment of the Karnataka Police brass band. The Pro-Chancellor, Minister for Higher Education, Basavaraj Rayareddy, and his family, and the Chancellor and Governor of Karnataka, Vajubhai Rudabhai Vala, joined them. Once appropriately robed, they set off in procession for Crawford Hall and took their places on the dais.

Everyone stood while the Karnataka Police band played the National Anthem, following which students of the Fine Arts College sang Naada Geethe, the State Anthem of Karnataka.

Vice-Chancellor Rangappa explained that in its centenary year this was the University of Mysore’s 97th Convocation. Accolades of excellence have been showered on the university, from where this year 24,000 are graduating; among them women predominate. Honorary Doctorates of Literature were bestowed on His Holiness and Smt Pramoda Devi Wodeyar, who as widow of the last heir of the erstwhile royal family of Mysore, represents a link to the Maharaja regarded as the University’s founder.

Called upon to give the Convocation Address, His Holiness paid due respect to his fellow dignitaries and other guests, but added:

“Usually I prefer to begin by greeting my brothers and sisters, which is what I believe we are. All 7 billion human beings on this planet today are physically, mentally and emotionally the same. We need to recognise this whatever our nationality, colour, background or status may be. Too many problems we face today derive from focussing on just such differences between us. The only way to overcome them is to see that we are the same. We all want to be happy and that is our right.

“I am happy and honoured to participate in this convocation ceremony at one of the country’s oldest universities. I have a special link and a fondness for Karnataka which goes back to Nijalingappa’s friendship and generosity to Tibetans.

“I also want to express my gratitude to you for granting me this honorary degree, which I have received having done very little to earn it, whereas the majority of today’s graduates will have worked very hard for their degrees. Thank you, too for this gift of a watch, which reminds me of the pocket watch I received as a small boy from President Roosevelt.”

His Holiness went on to say that we are today facing something of a crisis of moral principles. While all religious traditions have the potential to encourage moral principles, of the 7 billion human beings alive today, 1 billion have no interest in religion and of the other 6 billion, many don’t really take it seriously. Consequently, he said, we need to find a more universal and inclusive approach to inculcating moral principles. He asked if it could be done through prayer, but expressed scepticism, concluding that it can only be achieved through education.

He pointed out that India has traditionally cultivated a secular approach that accords all religious traditions respect, even evincing regard for the views of non-believers. There is a need for such an approach to fostering moral principles, he ventured, based on common sense, common experience and scientific findings.

“What’s most important,” His Holiness clarified, “is warm-heartedness and concern for others. We are social animals, we depend on others to survive, so it makes sense for us to be concerned about them. Nowadays, interested people in the USA, Europe and her in India are taking practical steps towards developing a secular approach to encouraging a sense of universal values. 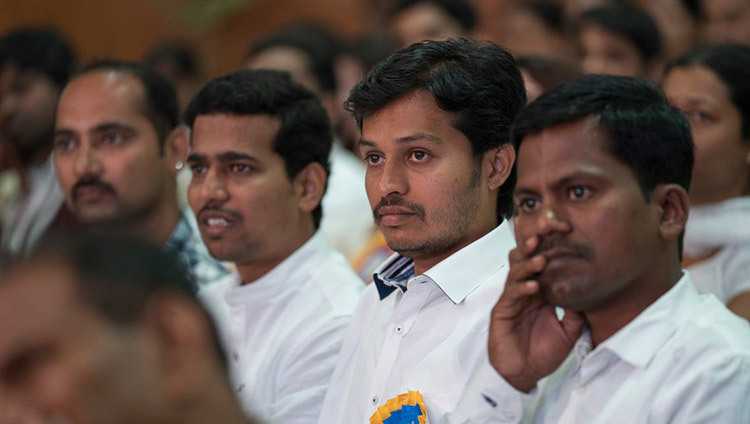 “I also often tell my Indian friends that this country has the potential to combine modern scientific and technological knowledge and development with the wisdom to be found in ancient Indian knowledge. The philosophy and science of mind that we received from India, we Tibetans have kept alive—but it belongs to you.

“For many of you who have graduated today, real life now begins. You have already proved that your brains are smart, but you will also need a warm heart and a concern for others’ well-being if you are to succeed. These qualities will bring honesty and transparency to whatever you do, which is what will also earn others’ trust and friendship, enabling you to put your education to meaningful use. Thank you.”

The Chancellor declared the convocation closed.

His Holiness was invited to lunch at the Vice-Chancellor’s residence where he was able to engage in animated conversation with senior members of the University and other guests of the convocation. Afterwards, as the rain began to relent, he returned to his hotel. Tomorrow he will drive to Bangaluru.