Russian Intellectuals in Riga, House of Religions in Bern October 12, 2016

Bern, Switzerland - Before leaving Riga today, His Holiness the Dalai Lama held a short meeting with a group of Russian intellectuals at which he announced: 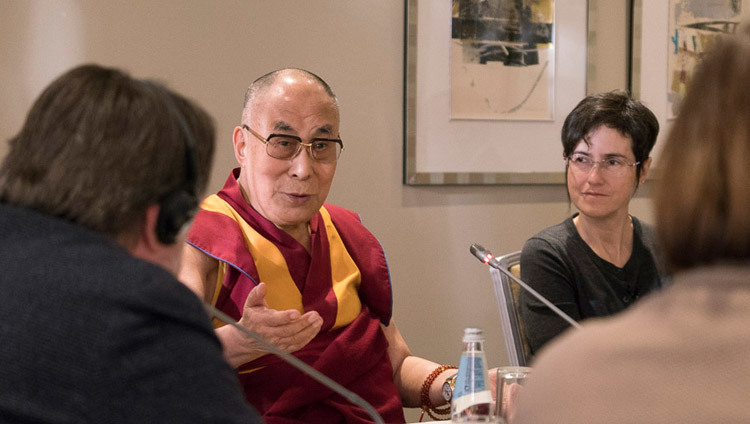 “I prefer things to be completely informal so we can feel free.”

Asked about the decision he made to leave his country and go elsewhere, he replied:

“Historically leaders of governments can be more open-minded and sometimes less so—but the important thing is that they don’t last forever. It’s our basic human nature to want to be free. In our case, people in Tibet have worked to preserve our culture and language, while some of us escaped and took advantage of the freedom we found outside to preserve our identity.

“All human beings are the same in wanting happiness and not wanting suffering. We are born the same way; we die the same way. Wherever I go and whoever I meet, I consider them to be equally human like me. In today’s world we need the trust of friends. I want to retain the freedom to meet people and speak with them. I want to encourage them all to work to cultivate peace of mind.”

A Neuroscientist wanted to know where His Holiness thinks thoughts come from. He told him that in terms of sensory perceptions and much of our mental consciousness we depend entirely on the brain. This remains true in sleep when our senses are shut down and we dream. However, he said, when we die and the mind dependent on the brain has stopped, some consciousness can still remain. 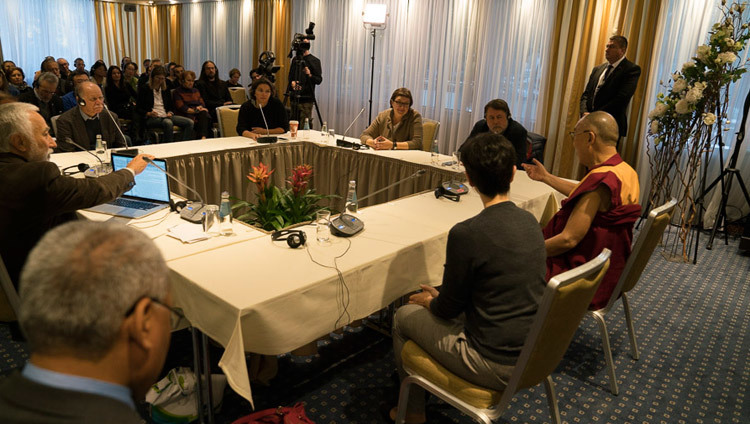 The conversation turned to change and His Holiness recalled Erich Honecker’s proclaiming that the Berlin Wall would stand for 100 years and within weeks it had fallen. In China over the last 40-50 years there has been much change. Today, in Beijing and Shanghai people meet in tea-shops and criticize the leadership, which not so long ago was unheard of. Tibetans, on the other hand, are much more tightly controlled. Some have told His Holiness how taken aback they have been at the relative freedom they have observed in mainland China.

His Holiness noted how the West missed opportunities at the time of Gorbachev and Yeltsin. He expressed his continuing admiration for the European Union which he regards as a model for others to follow.

“When people are ill-informed,” he remarked, “unscrupulous leaders can be manipulative. When Chinese tourists come to India they are often apprehensive that Tibetans will be hostile to them, but they find we are largely easy going, jovial and friendly.” 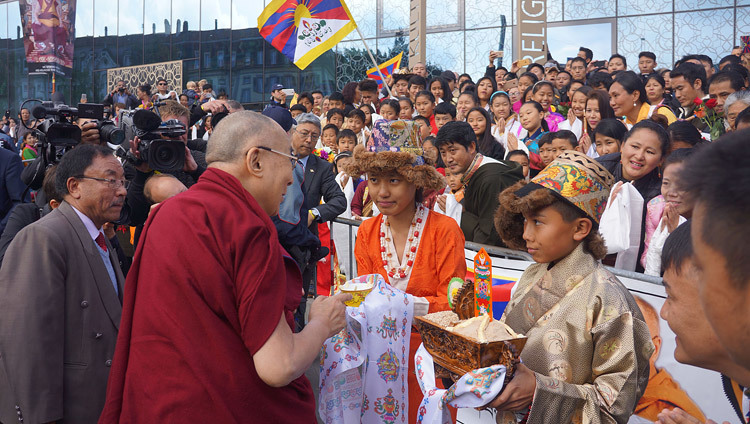 From Riga His Holiness flew to Bern, the capital or federal city of Switzerland, where he drove directly to the House of Religions, a project that opened in 2014 with eight religious communities represented under one roof. Several hundred Tibetans, young and old, and Mongolians were gathered, singing, outside the building to greet him as he arrived. President of the House of Religions, Mrs Gerda Hauck was at the door to welcome him and introduce him to members of the community.

At a lunch inside with 60 invited guests, at which completely vegetarian food according to Ayurvedic tradition was served, Mrs Hauck formally welcomed His Holiness. She described him as being a role model for peacefully meeting challenges. She thanked him for taking the time to come. The Mayor of Bern, Alexander Tschappat recalled that His Holiness’s planned visit to Bern in 2008 had had to be called off. Since then, he said, this amazing House of Religions has come about, which he was particularly happy for His Holiness to see. 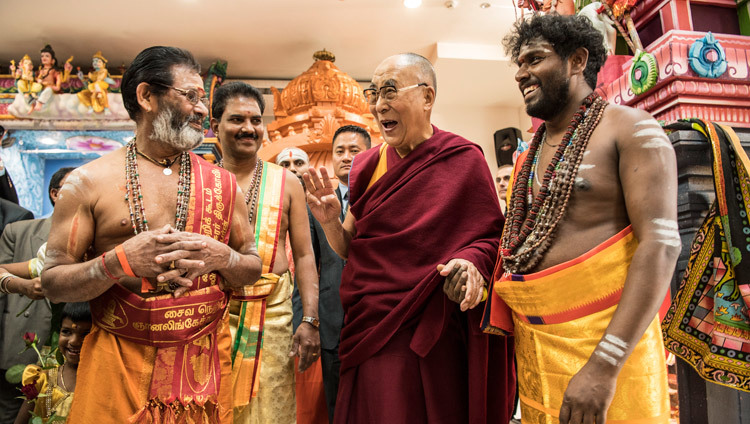 After lunch His Holiness visited several of the places of worship starting with the Hindu temple where the vibrant music and ritual procedures vividly recalled South India. He went on to visit the Mosque, as well as the Buddhist and Christian chapels where he paid his respects.

Lunch guests gathered upstairs to take part in a dialogue. His Holiness was invited to open the conversation, which he did, saying:

“I’m very happy to be here. As a Buddhist monk I’m committed to fostering inter-religious harmony, but here you are making a practical effort to bring that about by allowing a deeper understanding and mutual respect to grow. Wonderful.

“All our religious traditions convey the same message of love, forgiveness, contentment and self-discipline. Their philosophical views may be different, with some taking a theistic stand, worshipping God the Creator, and others taking a non-theistic stand, stressing personal responsibility instead. Amongst the latter only Buddhists assert that there is no independently existing self.”

His Holiness drew attention to cultural aspects of religions that may now be out-of-date and in need of change. He cited India’s caste system, which is at odds with the country’s dedicated democracy, and the appeals he has made to friends among India’s spiritual leaders to speak out in favour of bringing this up to date. 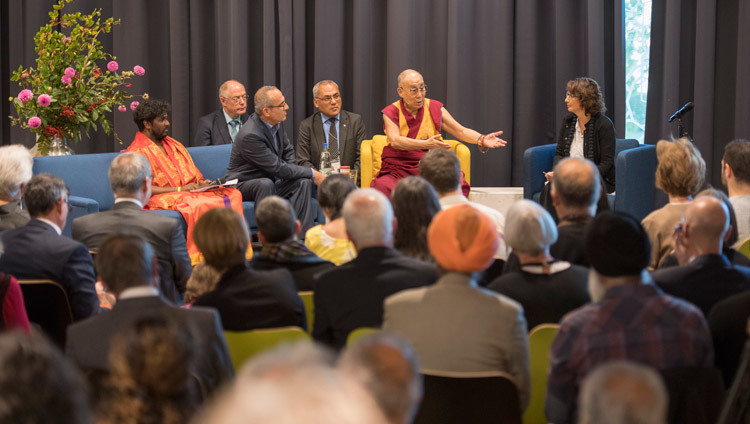 Hindu and Alevite representatives told His Holiness that the Tamil and Kurdish peoples lacked an independent homeland. He responded saying that many of today’s boundaries were arbitrarily drawn in the colonial era with insufficient regard for the interests of the people living there. He mentioned that the creation of the Jewish state had left Palestinians disappointed. Today we need to remember that as human beings we all belong to one human family.

He told the Hindu priest what he has often said in India that Hinduism and Buddhism are like twin brothers, sharing training in shila (morality), shamatha (concentration) and vipashyana (insight). What differentiates them is that Hindus assert atman, an independently existing self, where Buddhists deny it.

A Buddhist and a representative of the secular community raised the issue of commending non-violence in a violent world. His Holiness told them that fundamentally we are all human beings.

“We all want a happy life and we all have a right to pursue it. I try to promote human values on the basis of common experience, common sense and scientific findings. So it is all the more important that we make efforts to ensure that conflicts are resolved through dialogue, that ultimately this becomes a century of dialogue. 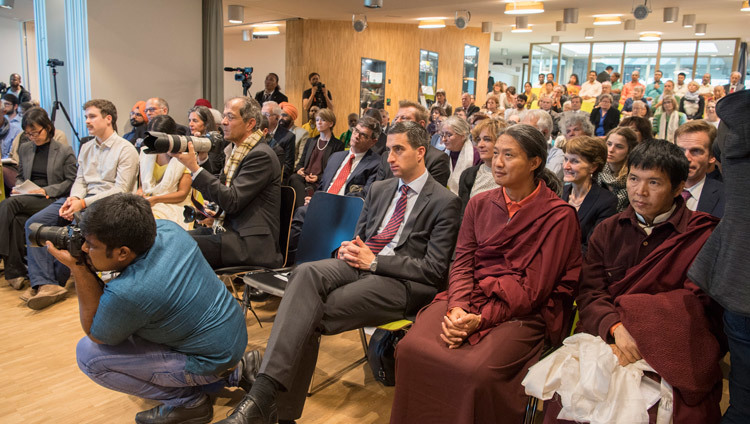 “Within the various Buddhist traditions the Vinaya or code of monastic discipline is common to all whether they belong to the Pali or Sanskrit traditions. When I have the opportunity I encourage Buddhists to become 21st century Buddhists with a firm understanding of what the Buddha taught. Rituals and prayers alone are not enough.”

His Holiness told the Christian and Muslim representatives that after the September 11th event he has been a defender of Muslims because the people who perpetrated the attacks where trouble-makers not proper Muslims. He reported that friends have told him that someone who sheds blood is no longer a proper Muslim and that jihad, far from being focussed on human opponents, is properly about tackling your own destructive emotions. He told them how happy he was to see that here Sunni and Shia followers are on good terms with each other.

“I’d like to suggest that you consider sending members of your small community here to places of conflict to help establish reconciliation.”

When Baha’i and Sikh representatives asked about the role of religious leadership, His Holiness spoke with admiration of Pope John Paul II’s initiative to convene an inter-religious meeting at Assisi. He recalled that it presented a wonderful opportunity for scholars and genuine practitioners to discuss what they had in common with each other and to learn from where they were different. He had asked the Pope to make such gatherings more regular events.

The moderator and the President Mrs Hauck thanked His Holiness for coming and sharing his views. He responded that he was pleased to see that the House of Religions is not the sleepy organization he feels some inter-religious forums have become.

Tomorrow His Holiness is to give a public talk on the need for solidarity and dialogue.