Second Day of the ‘Commentary on Dignaga's 'Compendium of Valid Cognition'’ October 11, 2016

Riga, Latvia - The golden early light catching the treetops and steeples of Riga’s churches belied the chill in the air this morning as His Holiness the Dalai Lama met with about 75 Tibet Supporters from the Baltic States. Latvian Buddhists welcomed him first with a gift of a thangka painting of 1000 armed Avalokiteshvara. As he accepted it, His Holiness told them: 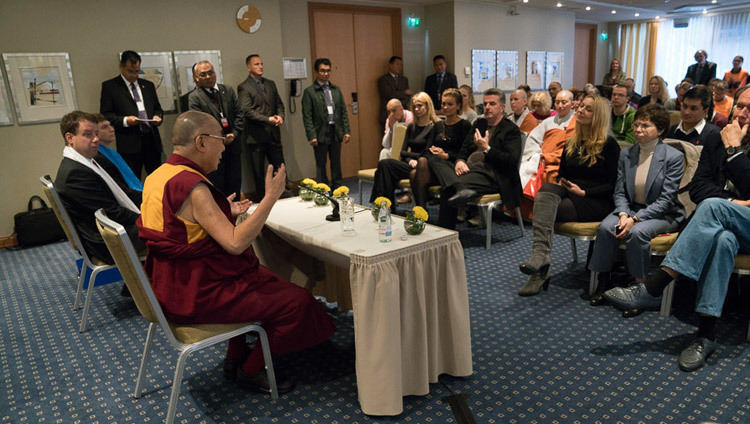 “Avalokiteshvara has a special connection with the Tibetan people. On one level I consider him to be my boss. Now and then I seek his advice.”

The Estonian group made a request for him to come to Estonia to teach while the Lithuanian Representative presented him a small gift.

“It’s a great honour to meet with friends for the three Baltic States again,” His Holiness told them, “you have a lot of experience of oppression as we do.

“Tibet is often called the Roof of the World and the environment and climate of the Tibetan Plateau have an influence on our neighbours. More than one billion people depend on rivers that rise in Tibet. Deforestation and now mining have caused damage. The altitude and the dry atmosphere mean that this will take longer to recover than in other places.

“The Tibetan language too is under pressure. In some schools its study is restricted. In others it’s not, but students of Tibetan earn lower marks than students of Chinese.

“Recently, the Chinese authorities decided to upgrade several towns to cities with the effect that even more Chinese come in. They tend to be uneducated and unskilled but they outnumber Tibetans and compete successfully against them for what employment there is. In towns the principal language is now Chinese and in Lhasa Tibetans have even switched to eating rice instead of the tsampa they used to eat.” 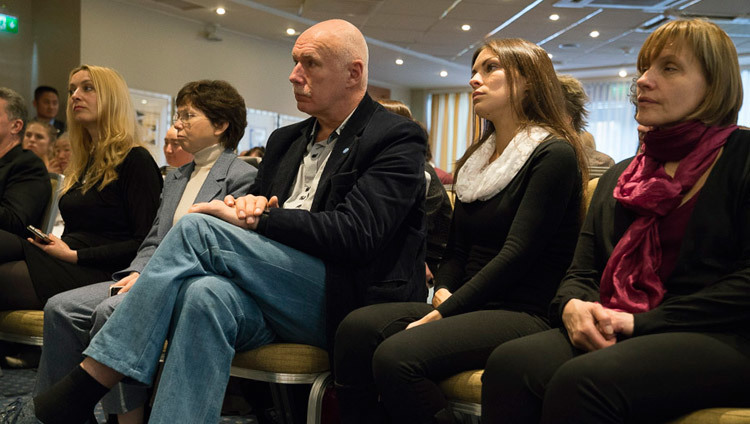 His Holiness went on to say that meetings with Buddhists from various countries revealed to him how important is the Buddhist knowledge that Tibetans have preserved through their years of rigorous study. If this knowledge should diminish, he said, it would be a great loss. He reiterated that Tibetans are not seeking independence, but stressed that they must have the opportunity to preserve their language, culture and knowledge. He said that since 1974 they had been seeking a mutually agreeable solution.

In answers to questions he advised friends from the Baltic States to organize a group to visit Tibet, environmentalists among them, to study what damage has already taken place and what steps need to be taken to redress that and prevent further degeneration. With regard to preserving Tibet’s spiritual traditions without succumbing to sectarianism, he pointed out that all have roots in the Nalanda tradition.

At the Skonto Hall once more, His Holiness took his seat on the throne. He was presented with copies of his book ‘Toward a True Kinship of Faiths’ translated into Latvian and Russian. Next, the ‘Heart Sutra’ was recited in Russian.

His Holiness began the session by quoting Nagarjuna, the second Buddha of this era, who at the start of his ‘Fundamental Wisdom’ pays homage to the Buddha for teaching that whatever is dependently arisen is free from the eight extremes: unceasing and unborn; not permanent yet unannihilated; not coming and not going; without distinction, without identity, and free from conceptual construction. He said things do exist in conventional terms, but do not exist intrinsically. It’s not that they do not exist at all, but under critical analysis they cannot be found. Nagarjuna further says:

His Holiness asked why we talk about the lack of inherent existence and answered that it is because it is our misconception that things inherently exist that is the source of our suffering. The Buddha taught about dependent arising from his own experience. 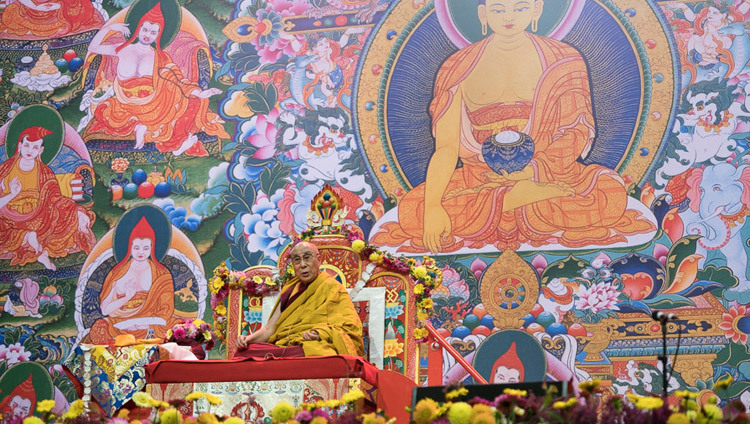 As Dignaga said the Buddha became enlightened, he became a reliable person, by traversing the path. The third Turning of the Wheel of Dharma revealed that all beings have a clear light nature of mind. In Tantra it is explained that the mind has different levels of subtlety. The empty nature of the mind is the basis of our having the potential to achieve the four bodies of the Buddha.

Describing how the body consists of five elements, solidity, fluidity, heat, motility and space, His Holiness suggested that if we search for the self among them we don’t find it. Not finding it within the body, we feel it must be part of consciousness. He said:

“The Dalai Lama is not my body; he is not my mind, but nor is he separate from them. When we analyse in this way, we find nothing. We conclude that we exist by way of designation.”

As social beings living in society, we need friends. His Holiness pointed out that the fact that a loving family is happy even if it is poor demonstrates that cherishing others more than yourself is a source of happiness. He cited what Shantideva has to say:

He led the gathering through a ceremony for generating the aspiring awakening mind of bodhichitta. After that he gave the lay-person’s vows to those who wished to take them. Finally, he gave transmission of the mantras of the Buddha, Avalokiteshvara, Manjushri and Arya Tara. 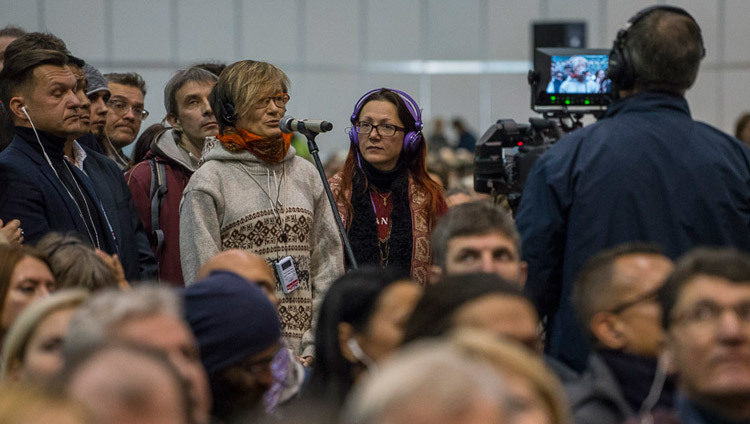 After a break for lunch, His Holiness took questions from the audience. He answered one enquiry about raising children saying that there may be occasions when children don’t listen or when their naughty behaviour is dangerous when it is appropriate to be stern. However, by and large he feels it is better to show them love and affection. His Holiness was clear that being threatening or inciting fear is not a helpful approach.

He told someone else who wanted advice on how to reconcile a spiritual life with family life that the Buddha did not say all his followers should become monks or nuns. Since the main practice involves transforming the mind, it should be compatible with living a family life. Another man wanted to know if there are ever circumstances when a Buddhist should set aside his vows and take up arms. His Holiness asked in today’s reality, when we are so interdependent, what would be the benefit of killing each other. Hundreds of millions died in violence in the last century, but what was the use? What was the benefit?

As long as any sentient being Anywhere has not been liberated, May I remain [in the world] for the sake of that being Though I have attained highest enlightenment.

His Holiness told her that it is about training the mind, that it is an aspiration to help others not just for one life, nor even one aeon, but for many lives and aeons. 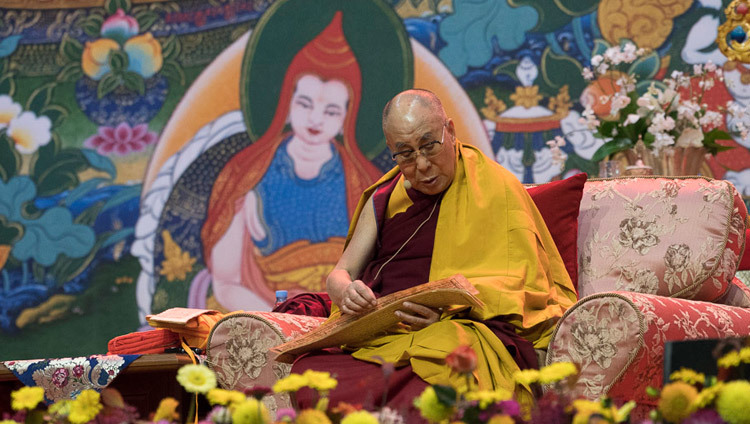 His Holiness resumed his reading of the second chapter of Dharmakirti’s ‘Commentary on Dignaga's 'Compendium of Valid Cognition'’. Selecting particular verses to elucidate he touched on the Buddha’s being a reliable guide, the role of the Four Noble Truths in all the Buddha’s teachings and the observation that ignorance is a distorted view, a misconception of reality. What’s more ignorance that is the root of all suffering can be uprooted.

There was discussion of how disturbing emotions like attachment and anger are two opposed ways of looking at something, yet do not counter each other. Similarly, loving kindness does not counter ignorance, only understanding reality does that.

Reaching the end of the chapter, His Holiness repeated that he had been impressed to know that a Russian Indologist worked so hard last century to draw attention to Dharmakirti’s contribution to Buddhist logic. He said he had only given an introduction, but to teach the work thoroughly would require intense preparation. He recalled a remarkable Mongolian scholar, Lobsang Chödak, a former Abbot of Drepung Gomang College, who had brilliant command of this text, but who had told him that there may no longer be anyone who could explain the text from beginning to end. His Holiness concluded:

“It’s been a great pleasure to have the opportunity to give this introduction, to conduct the ceremony for cultivating the aspiring awakening mind and to have had the opportunity to explain something. I hope I may have sparked some interest in you. I regard the works of the Nalanda masters as truly eye-opening.

“The Arhat Sagalha said we must make this life meaningful through study, reading books and cultivating the Three Trainings. I’m 81 years old, but whenever I can I read books. Sakya Pandita said, “Even if you are going to die tomorrow, it’s worth studying today.” If as a result you can deal with the problems you face and tackle your negative emotions, the purpose of the teaching has been served.”

Before the event came to an end, the organizers made a public financial statement. With a friend accompanying him, celebrated Russian singer Boris Grebenshchikov played a gentle song to bring the session to a conclusion and His Holiness left the stage to calls of affection from the audience. He waved back saying, “See you again.” Tomorrow, he will travel to Bern, Switzerland.