Talk at Tushita before Participating in Flagging off 100 Million for 100 Million Campaign December 11, 2016

New Delhi, India - This morning Prof S Parasuraman, Director of the Tata Institute of Social Sciences met His Holiness the Dalai Lama to inform him of progress being made in developing a training programme in secular ethics. Responding to His Holiness’s comment that modern education is wonderful in many ways, but is inadequate when it comes to inculcating inner values or moral principles, Prof Parasuraman outlined a 30 hour course that has been developed, taking inspiration from His Holiness’s published writings. He mentioned five topics: 1. Sourcing my universal values; 2. Discerning change; 3. Leading with others; 4. Accountability, and 5. Ethical Leadership.

In expressing his appreciation, His Holiness remarked that India may be the only nation that can combine modern technological development with the wisdom of ancient Indian knowledge. 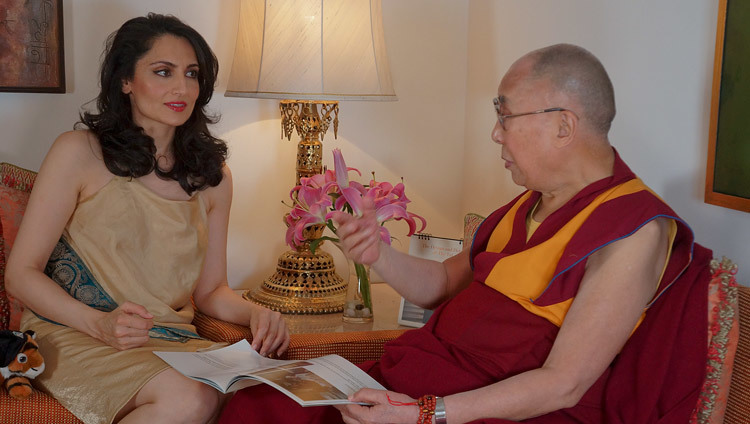 In an interview for a documentary entitled ‘The Great and the Good’ Renu Mehta asked how we can create more harmony in the world. His Holiness told her we need to overcome the tendency to see others in terms of ‘us’ and ‘them’. He said that when we only look after ourselves, fear and mistrust naturally arise. She asked if there was a role for meditation.

“One aspect is shamatha or single-pointed concentration, but I think of it as more like a tranquilizer because in the short term it calms you down, but in the long run your problems still remain. If you take the analytical, vipashyana, approach and, for example, examine whether there are any advantages to anger, you can put a stop to it.”

Asked what makes a successful person, His Holiness replied:

“The ultimate source of happiness for self and others is compassion, concern for others and being of service to them.”

After lunch, His Holiness drove to the Ashoka Hotel where Tushita Meditation Centre, New Delhi, were holding their 21st Dharma Celebration. He was met on arrival by Zopa Rinpoche and Tushita Director Renuka Singh and escorted into the hall, which Dr Singh said was the venue of the first such Dharma Celebration 35 years ago.

His Holiness was invited to release two books, one about Guru Padmasambhava by Aruna Vasudev and another about Nagarjuna by Mohini Noon. Vasudev explained that these were the inaugural volumes of a series of six about Indian Buddhist masters intended for Indian readers. His Holiness was full of praise for Nagarjuna’s teachings:

“I’ve been thinking about what he taught for more than 60 years and I can say it’s had a reducing effect on my destructive emotions.” 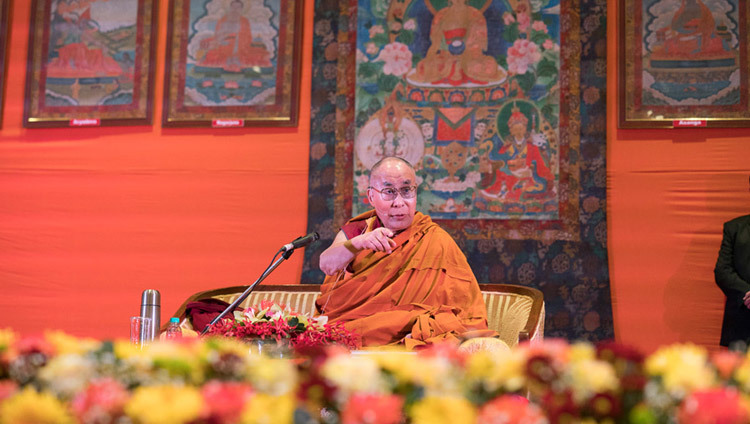 In response to Renuka Singh’s request to teach, His Holiness began:

“However differently we may sit or dress, we are all the same. We all have destructive and positive emotions. Sometimes we’re happy, sometimes we’re sad. Mentally, physically and emotionally we are the same. You may be aware of my discussions with scientists over the last 30 years. Recently some of them came up with evidence that basic human nature is compassionate. We are also social animals, so considering others as ‘us’ and ‘them’ is wrong. It prompts division and conflict.

“Many of the problems we face, like this, are of our own making. We have to solve them ourselves. After the suffering that marked the 20th century, we should make efforts not to repeat it. Money and military power won’t help. What we need to do is to show each other affection on the basis that we are all the same as human beings. This is something I try to make people all over the world aware of.”

His Holiness said his second commitment, as a Buddhist monk, was to inter-religious harmony. He expressed regret that today traditions that are intended to be a source of tolerance and forgiveness have become grounds for conflict and killing. He highlighted the way indigenous and imported religious traditions have lived side by side in India for centuries. He mentioned that just as the Buddha taught differently according to his listeners’ interest, their capacity and the conditions in which they lived, so a multitude of other religious traditions have come about at different times.

Explaining that although he retired from political responsibility in 2011, as a Tibetan, His Holiness remains committed to the protection of the natural environment of Tibet and the preservation of Tibetan language and culture. This culture is rooted in the Nalanda tradition of Buddhism that entails rigorous study and practice. In this connection he remarked that tomorrow he will leave for South India. While he is there he will award the first group of nuns to have completed their Buddhist studies with Geshe-ma degrees—a significant achievement. 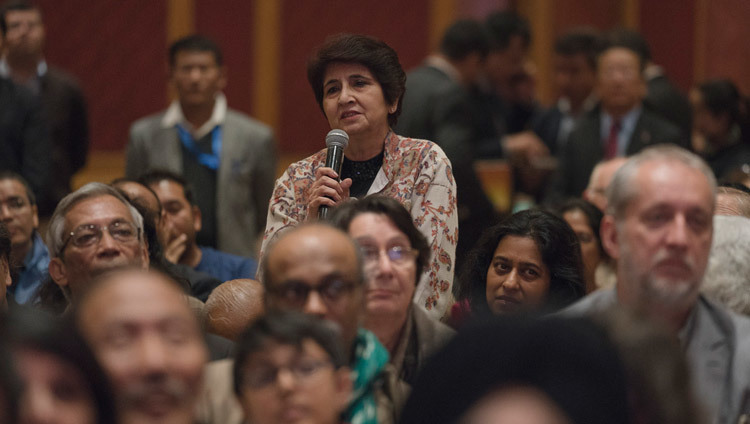 His Holiness also alluded to a reassessment of the contents of the Kangyur and Tengyur in terms of science, philosophy and religion. On the one hand, science of mind and philosophy can be studied by anyone interested from an academic point of view, without any religious commitment. On the other hand, many people from other Buddhist countries now acknowledge Tibetan Buddhism as the authentic Nalanda Tradition and show interest in learning more about it.

In answering questions from the audience His Holiness recalled a friend who told him that while he seemed to have a scientific bent, he was surprised that he apparently believed in the function of oracles. His Holiness’s response was that there are indications of the existence of many other kinds of beings than those we can see and touch. Asked what can make children more compassionate, he replied, “Education”.

Finally, someone wanted to know if His Holiness had ever wanted to live an ordinary life. He recounted that when quite young he was undertaking a retreat in the Potala in the presence of the Regent. At the end of the day, the Regent would fall asleep and His Holiness would hear boys and girls singing aloud below the Potala as they brought their animals home from grazing. He said he fleetingly wished he could be like them. However, he added, he later realized that the position he occupies had great potential to be of benefit to the Dharma and beings.

As His Holiness’s talk concluded, Zopa Rinpoche read an elaborate, heartfelt vote of thanks, after which His Holiness departed briskly for Rashtrapati Bhavan. There he rejoined the Laureates and Leaders gathered to witness the Honourable President of India, Pranab Mukherjee, flag off the 100 Million for 100 Million campaign. 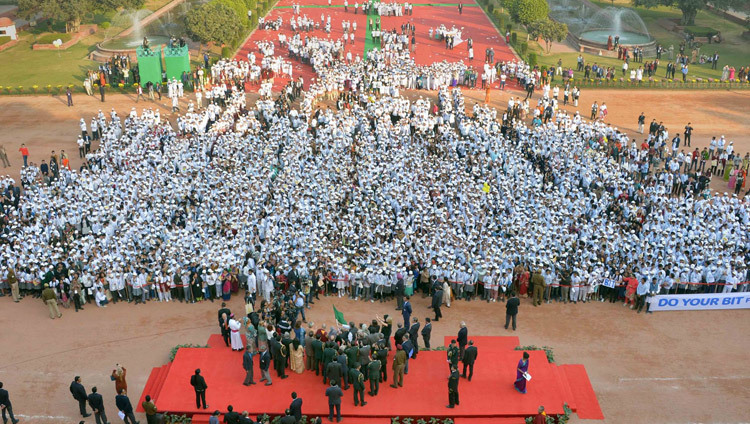 5000 schoolchildren from across India and beyond were assembled on the forecourt of Rashtrapati Bhavan. In the main courtyard within the building Kailash Satyarthi pointed out that today was the President’s 81st birthday. He then gave a passionate introduction to the campaign about to be launched. He declared that while 100 million children in the world still suffer and are deprived of education, change lies with children. He explained that he envisaged a movement in which 100 million better off children would commit themselves to supporting and helping the 100 million children left out.

“We want a world in which we all share wealth and power,” he said.

In the presence of His Holiness and Nobel laureates Tawakkol Karman and Leymah Gbowee, as well as former Australian Prime Minister Julia Gillard and First Lady of Panama Lorena Castillo and other leaders, the President of India spoke in support. He drew attention to the significance of the campaign being launched from Rashtrapati Bhavan, the place that symbolizes the Republic of India’s commitment to democracy, pluralism and secularism. He said:

“Despite developments we have made, 100 million children are not in school. Humanity must see that there is no progress unless our children are safe and secure, unless they have the opportunity to become agents for change for the good of humanity. May every child be free from want, fear and exploitation. Jai Hind.”

Coming down into the forecourt, Kailash Satyarthi was cheered by the assembled children, His Holiness too was applauded when he joined him. When the President followed the laureates and leaders down to the dais in the forecourt, the children sang “Happy Birthday” to him. Many hands joined his in flagging off the campaign and balloons bearing the messages - ‘100 Million of 100 Million’ - and - ‘Do Your Bit for Children’ were released and rose into the sky. Joy filled the air.

Tomorrow His Holiness leaves Delhi for South India, with Mysore his first stop