Teaching of Aryadeva’s 400 Verses on the Middle Way Begins October 3, 2016

Thekchen Chöling, Dharamsala, HP, India - A buzz of excitement on the western side of the Tsuglagkhang this morning alerted the 5500 people waiting in and around the temple to His Holiness the Dalai Lama’s imminent arrival. Photographers, devotees and well-wishers around the eastern door prepared to greet him. 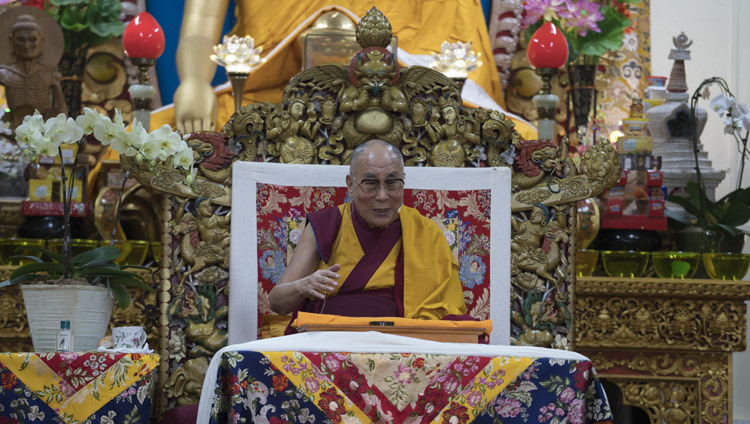 Having taken his seat on the throne, His Holiness remarked that the main disciples for the teaching he was about to give were a group of 1000 from Taiwan, most of them students of the late Tenzin Jamchen. Some of them recently received monastic ordination from His Holiness. Besides this group there were nearly 1650 from 64 different countries, as well as Tibetans and Indians.

“Buddhism reached China before it was brought to Tibet, which makes the Chinese the senior students, while Tibetans and Mongolians are junior students. However, I think I can say that the junior students’ level of knowledge is not bad and we are all followers of the same Nalanda tradition. You students from Taiwan have been coming here to listen to teachings for many years and I’m happy to see you again.” 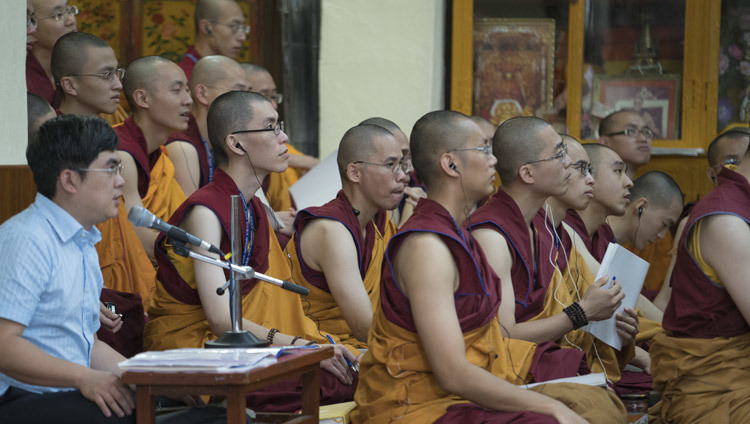 “The text we are going to look at comes from the Nalanda tradition. Aryadeva is the principal spiritual son of Nagarjuna. I received transmission and explanation of the text from Khunnu Lama Tenzin Gyaltsen from whom I received all 13 great classic Indian texts. I also received it from Khunnu Lama Rigzin Tenpa and from Serkhong Tsenshab Rinpoche. Khunnu Lama Tenzin Gyaltsen was a scholar of Sanskrit, which further enriched his explanation. Although I haven’t received a transmission of Chandrakirti’s commentary, that’s the one I’m relying on.”

His Holiness observed that in ancient Indian traditions negative emotions were regarded as faulty, but they are not eliminated simply by reciting mantras. Since they are rooted in ignorance, we have to overcome ignorance. This is the intention of the Perfection of Wisdom sutras---the 25 line version of which is popularly known as the Heart Sutra, while another, the Diamond Cutter Sutra, His Holiness has taught previously. He explained that there is explicit and implicit content to the Perfection of Wisdom Sutras. The explicit content involves the profound view of emptiness, while the implicit content refers to the paths and grounds and so forth. Nagarjuna wrote extensively clarifying the wisdom understanding emptiness, whereas Asanga and Maitreya elaborated on the path.

Noting that Nagarjuna had not written to show off, but to help others overcome suffering, His Holiness mentioned a verse from ‘Fundamental Wisdom’ that he encourages people to memorize: 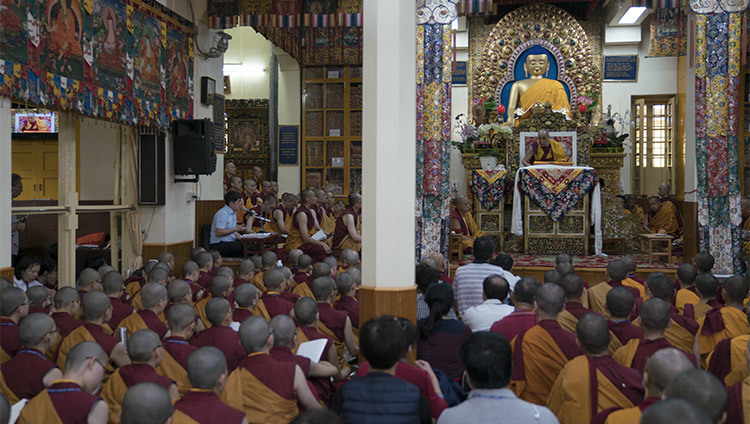 He commented that today’s  existing education system does not teach how to develop peace of mind, but that if you have peace of mind your health and general well-being improve. He announced that efforts are afoot to draft a curriculum to be used in schools to teach universal values and added that study of the workings of the mind and emotions is prevalent in Buddhist science. Developing a sense of emotional hygiene on the basis of such understanding is a way to be happier yourself. His Holiness reminded his listeners that his first commitment is to promoting human happiness, while his second involves encouraging religious harmony, the basis of which is that all religious traditions have a common purpose in teaching love and compassion.

Reading the first verse of ‘Aryadeva’s 400' His Holiness spoke of the gross impermanence we can see clearly around us, but also of the more subtle impermanence implied in momentary change, which he said he has also observed at a sub-atomic level through a microscope. He said understanding impermanence helps undermine ignorance.

The teaching will continue tomorrow.