Thekchen Chöling, Dharamsala, HP, India - His Holiness the Dalai Lama began the final day of his current series of teachings this morning by observing that Bodhisattvas are referred to as children of the Conquerors. He said the Buddha had attained enlightenment as a result of developing the awakening mind of bodhichitta, the altruistic aspiration to enlightenment, many times in the course of his previous lives. When the Buddha gave the Perfection of Wisdom teachings, the main disciples were Bodhisattvas who cherish others more dearly than themselves. His Holiness was briefly silent as he reflected on these qualities.

“Although we cannot compare to true Bodhisattvas, we follow their example and engage in the Bodhisattva practices. As the ‘400 Verses’ say:

190.
First prevent the demeritorious,
Next prevent [ideas of a coarse] self;
Later prevent views of all kinds.
Whoever knows of this is wise.

“The demeritorious here refers to unwholesome deeds, deeds that give rise to suffering. To behave in a non-virtuous way but to say we are following the practices of Bodhisattvas would be hypocritical. So the first step is to refrain from unwholesome actions, the next is to put an end to the misconception of self and third is to prevent all kinds of wrong views. 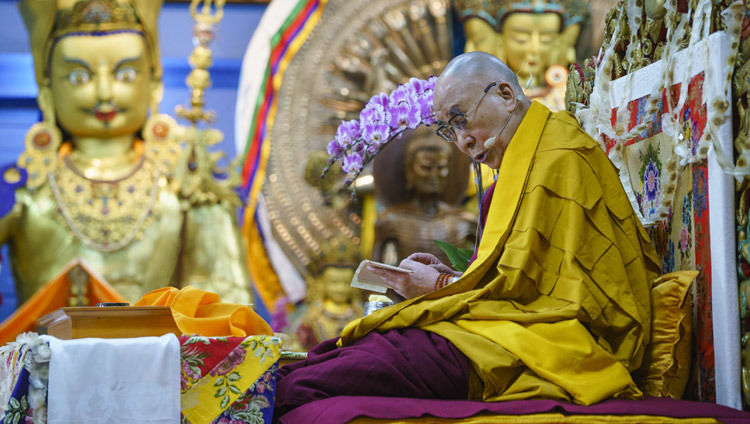 His Holiness explained that in Buddhist teaching the root of all suffering is the misconception of an independent, autonomous self and there are ways to overcome it. The ‘400 Verses’ also recommends overcoming pride and self-importance, suggesting it is better to regard other sentient beings as your equals. We make the mistake of seeing the self as separate from the psycho-physical aggregates, seeing it as their ruler or controller. Therefore, we need to learn how to overcome this misconception of self. The Buddhist Sanskrit tradition goes to great lengths to explain how to overcome this mistaken sense of self, how to counter the disturbing emotions that arise from it and how to eliminate their very imprints that are obstructions to knowledge.

His Holiness observed that things are empty of any intrinsic existence and the mind can realise that and thereby reduce the intensity of our disturbing emotions. However, our present ordinary mind tends to be preoccupied with sensory perceptions. Some people are capable of accessing a subtler mind by employing lucid dreaming; being aware that you are dreaming when you are dreaming. His Holiness said that if we can meditate on bodhichitta and emptiness in that state of mind it can be very powerful.

He went on to say that this kind of use of the subtler mind is not taught in the sutra vehicle, it is an instruction from tantrayana. He said a yet subtler state of mind manifests, as he mentioned the day before yesterday, at the time of death. In addition to coarse, subtle and subtlest states of mind there are different levels of energy that support them. Noting that we all have a subtle clear light mind within us, His Holiness stated that the subtlest mind and subtlest energy provide the causes for the Buddha’s mind and body. He repeated that while emptiness is explained in the sutras, the subtlest mind that realises it is explained in the tantras. His final remarks were that it is helpful to keep in mind the route of the path we are taking when we engage in practice. 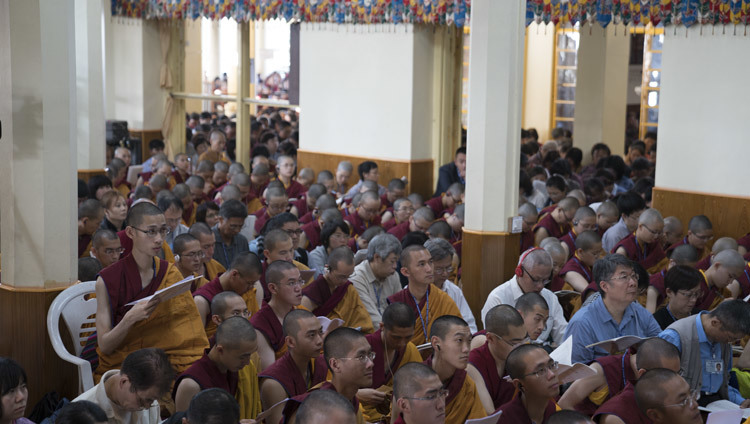 His Holiness then announced that he would lead the congregation in generating the awakening mind of bodhichitta, but would first lay the foundation for that by giving the lay-persons’ vows, the precepts of upasakas and upasakis. On completing the bodhichitta ceremony he gave transmission of the mantras of the Buddha, Avalokiteshvara, Manjushri and Tara.

From the colophon His Holiness read that the book was translated into Tibetan in the Kashmiri city of Anupamapura by the Indian abbot Suksmajana and the Tibetan translator Ba-tsap Nyi-ma-drak. He then read a few lines from Chandrakirti’s commentary with which he had opened the teaching.

Recalling that he has earlier taught Nagarjuna’s ‘Letter to a Friend’ and ‘Fundamental Wisdom’ at the request of the same Taiwanese group, His Holiness expressed appreciation of the effort they have exerted in journeying to Dharamsala to listen to the teachings. He told them that the important thing is to practise, to bring about a transformation within. Laughing he said he had fulfilled his part by teaching the text, putting what they had learned into effect was now their responsibility.