Thekchen Chöling, Dharamsala, HP, India - Once again this morning, on arriving in the Tsuglagkhang, His Holiness the Dalai Lama saluted the audience, both those within the temple and those seated outside. Having mounted the throne he paid his respects to the Buddha before taking his seat. The ‘Heart Sutra’ was recited briskly in Mandarin as bread and tea were served to the crowd.

“As Nagarjuna says in a verse of gratitude at the end of his work ‘Fundamental Wisdom’,” His Holiness began,

I prostrate to Gautama
Who, through compassion,
Taught the exalted Dharma,
Which leads to the relinquishing of all views.

“As the verse says, the Buddha taught out of compassion for all beings. All religious traditions benefit their followers and others by teaching love and compassion. The Buddha saw that the root of all suffering is ignorance and that the way to overcome it is to understand the reality of things as they are. In his ‘Guide to the Bodhisattva’s Way of Life’ Shantideva also describes sentient beings’ predicament:

Although seeking to avoid pain,
They run headlong into suffering.
They long for happiness, but foolishly
Destroy it, as if it were their enemy 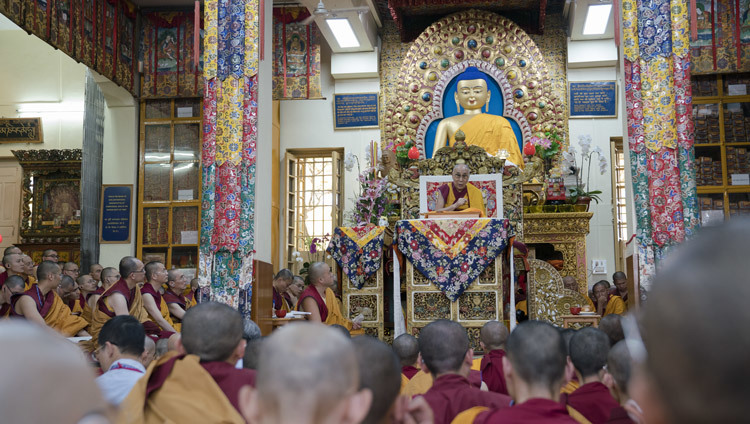 His Holiness went on to say that the Buddha was able to become enlightened because of the clear light nature of the mind. All sentient beings have the same potential, the same Buddha nature. But to become a Buddha we need to develop the awakening mind of bodhichitta and the non-dual wisdom understanding emptiness. It is not just a question of having great compassion and wishing for beings to be free from suffering, it requires courage to take responsibility for helping and liberating them.

His Holiness resumed his reading and explanation of ‘Aryadeva’s 400 Verses’ at Chapter 5—Bodhisattva Deeds. He recounted that in the 1960s he had great faith in the practices for developing the awakening mind and employed the method of Seven Causes and One Effect. He felt the aim was good, but would be very difficult to fulfil. After receiving teachings on the ‘Guide to the Bodhisattva’s Way of Life’ from Khunnu Lama Tenzin Gyaltsen he said he had a change of heart and felt that if he had the time to really apply the practice he could achieve something.

His Holiness announced that tomorrow he will lead a ceremony to generate the awakening mind of bodhichitta based on the aspirations expressed in the following verses from Nagarjuna’s ‘Precious Garland’:

May sentient beings be as dear to me as my own life,
And may they be dearer to me than myself.
May their ill deeds bear fruit for me,
And all my virtues bear fruit for them.

As long as any sentient being
Anywhere has not been liberated,
May I remain [in the world] for the sake of that being
Though I have attained highest enlightenment.

As he left the temple His Holiness made his way slowly towards the steps down to the yard, stopping frequently to exchange words or shake hands with devotees and well-wishers. Several times groups of Taiwanese called out greetings in chorus and laughed with pleasure as His Holiness answered briefly in Chinese. He interacted similarly with smiling members of the public as he walked through the temple yard to the gate of his residence, exchanging a few words here and grasping an outstretched hand there. Once through the gate he was driven home to lunch and food was served in the yard for the Taiwanese guests and monks and nuns.