Teaching ‘Precious Garland’, ‘Stages of Meditation’ and ‘37 Practices of a Bodhisattva’ October 14, 2016

Zurich, Switzerland, 14 October 2016 - The slowly stirring streets of Zurich bore a wintry air as His Holiness the Dalai Lama drove to the Zurich Hallenstadion this morning, but when he arrived a long line of beaming Tibetan children, some with flowers in their hands, were there to greet him. 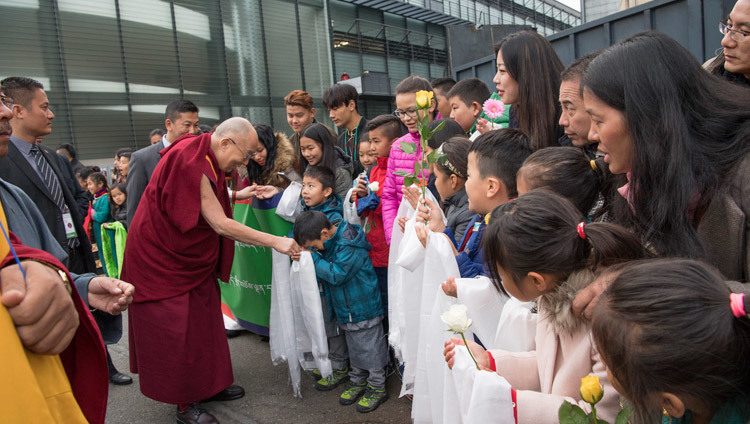 Inside the hall he walked to the front of the stage peering into the audience of 9000 in search of familiar faces. He saluted the large appliqué thangkas depicting the Buddha, Nagarjuna and White Tara behind the throne and took his seat, prompting the start of a Long Life Offering on his behalf. At the end he said:

“Today, Tibetans living in Switzerland have organized this Long Life Offering with faith and devotion. I’d like to thank you all. Whether the Lama lives long is not dependent on the ritual so much as on the strength of the spiritual bond between the Lama and the disciples.

“We Tibetans have a culture rooted in the Nalanda tradition that emphasizes study, reflection and meditation. We’ve preserved it for more than 1000 years. In Tibet, Tibetans have kept their spirit alive. We in exile are their representatives.

“I thought I would teach the first chapter of Nagarjuna’s ‘Precious Garland’ which explains how to attain the high status of good rebirth. Then I’d like to read volume two of ‘Stages of Meditation’ composed by Shantarakshita’s disciple Kamalashila in Tibet. There were Chinese Hashang monks at the Samye Monastery, built at Shantarakshita’s behest, with its departments of Ethics, Tantra, Meditation and Translation. Among these Chinese monks were some who said there was no need to study the Dharma, asserting realization could be won simply through thoughtless meditation.

“Kamalashila, invited at Shantarakshita’s recommendation, defeated these monks in debate. The Tibetan Emperor, Trisong Detsen, requested Kamalashila to compose a text to guide Tibetans and he wrote the three volume ‘Stages of Meditation’, to which I attribute a special significance. Later, after Tibet had become politically fragmented, descendants of the royal line similarly requested Atisha to compose a text with Tibetans in mind and he wrote ‘Lamp for the Path’. 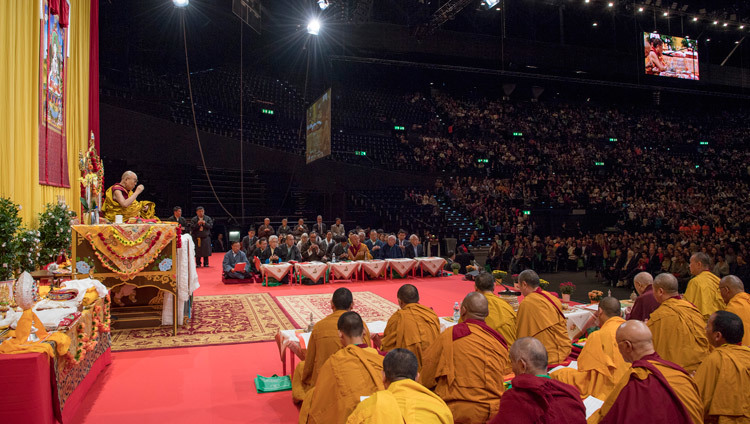 “Finally, I will read ‘37 Practices of a Bodhisattva’ by Ngulchu Thogme Sangpo, a contemporary of Buton Rinchen Drub, who was thought to be a real Bodhisattva. I won’t be able to read all these texts in their entirety, I’ll read selections. You each have your own copy, keep it at home and read it as often as you can. I received the ‘Precious Garland’ from Serkhong Tsenshab Rinpoche and the ‘37 Practices’ from Khunnu Lama Tenzin Gyaltsen.”

His Holiness mentioned that Buddhism is one of the world’s major religions and within it the Tibetan tradition is the most comprehensive, including as it does the works on logic and epistemology by Dignaga and Dharmakirti, which are found nowhere else. Tibetan language, with its own mode of writing, was evolved to express Buddhist ideas. The words of the Buddha and commentaries to them were translated into Tibetan in order that others could understand their wisdom. And yet the Buddha himself advised his followers to examine what he said as a goldsmith examines gold and not to simply accept it on the basis of faith. Therefore, study is crucial.

“Nagarjuna’s ‘Fundamental Wisdom’ focusses on what was taught in the Perfection of Wisdom teachings. I teach it and study it myself and find it helpful. This ‘Precious Garland’ was written for a patron of Nagarjuna’s who was a king.”

His Holiness read through the first chapter and at the end led the audience in a ceremony to cultivate the aspiring awakening mind of bodhichitta on the basis of the common verse:

To Buddha, Dharma and Highest Assembly
Until I am enlightened I go for refuge
Due to the collection of merit accumulated by me and by others,
May I achieve enlightenment to benefit all sentient beings. 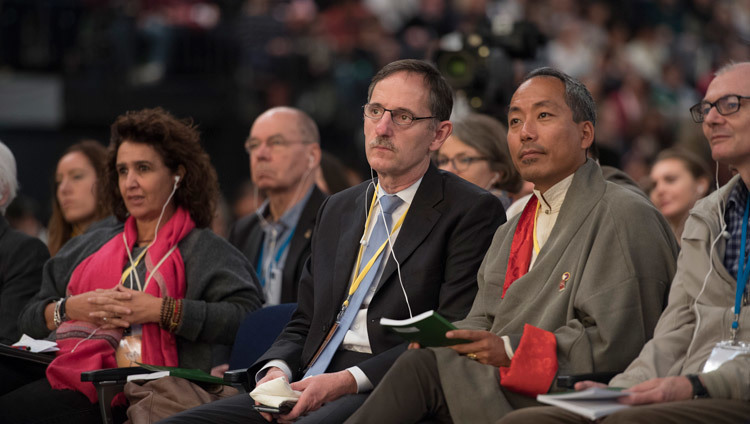 After lunch with members of the Swiss Parliamentarian Group for Tibet, the President of the Zurich Canton, the President of the Swiss Tibetan Friendship Association and elected Tibetan representatives, His Holiness resumed his teaching. He observed that following his enlightenment the Buddha reflected, “I have found this profound understanding, but if I teach it there will be no one able to understand it.” He remained silent for 49 days, then sought out his former companions and taught them about suffering—a result, and its origin—a cause. He further explained cessation and its cause, the path. These Four Noble Truths are clarified in terms of their 16 characteristics.

In due course, during the second Turning of the Wheel of Dharma, the Buddha explained emptiness and in the third Turning, he explained the clear light nature of the mind.

His Holiness began to read ‘Stages of Meditation’ which explains what the mind is, developing equanimity, the two kinds of bodhichitta and so on. He paused to pay attention to children playing in front of the stage and offered them sweets saying, “These children are our hope for the future”. He mentioned that the first two Dalai Lamas had been called Gendun—Gendun Drub and Gendun Gyatso and it might have been that all of them would have been called Gendun. However, when the third Dalai Lama received ordination from Panchen Sonam Drakpa he received the name Sonam Gyatso. When he went to Mongolia and Altan Khan gave him the title Dalai Lama, Dalai was a Mongolian rendition of the Gyatso part of his name. 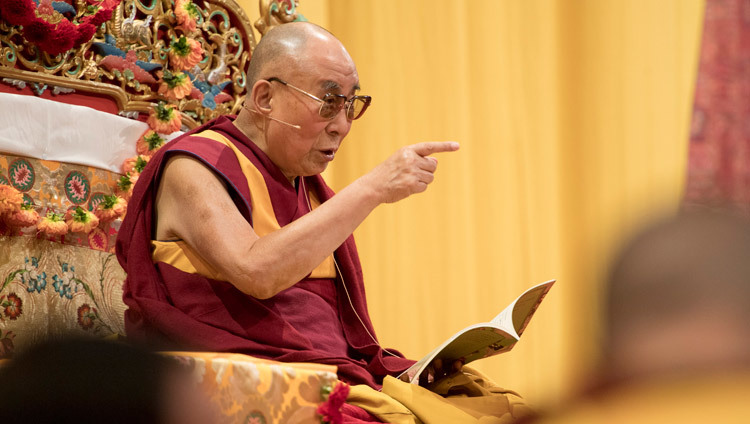 “Regarding Dolgyal, I did the practice for some time, although there were several great teachers at Drepung who were apprehensive about it. Eventually I did a divination about it that prompted me to stop. I discovered that the 5th Dalai Lama had written that Tulku Drakpa Gyaltsen had been lucky to be recognised as the reincarnation of Gelek Palsang. He also wrote that Dolgyal arose as a result of distorted prayers and that he harmed beings and the Dharma.

“In time Jangtse monastery asked Trijang Rinpoche about setbacks they’d been facing and he told them it was a result of Palden Lhamo’s displeasure. They asked me why she was displeased. I did a divination that showed it was to do with their propitiating Dolgyal. I sent a discreet message about this, but gradually the word got out. Eventually followers of Dolgyal set up an organization to protect Dolgyal or Shugden. They criticized me and you may have seen the demonstrations they held against me and the way they depicted me—not that I mind about that, but I am concerned about their ignorance.”

At this point His Holiness gave a transmission of a short prayer that Dilgo Khyentse Rinpoche had requested him to write:

The path of union of emptiness and compassion
Is lucidly explained by Protector of the Dharma and beings of the Land of Snow
You are the Lotus Holder Tenzin Gyatso
We supplicate you that your wishes be spontaneously fulfilled.

In ‘Stages of Meditation’, reaching the section on Actualizing Special Insight, he quoted a verse from Je Tsongkhapa’s ‘Three Principal Aspects of the Path’:

Appearances refute the extreme of existence,
Emptiness refutes the extreme of nonexistence;
When you understand the arising of cause and effect from the viewpoint of emptiness,
You are not captivated by either extreme view. 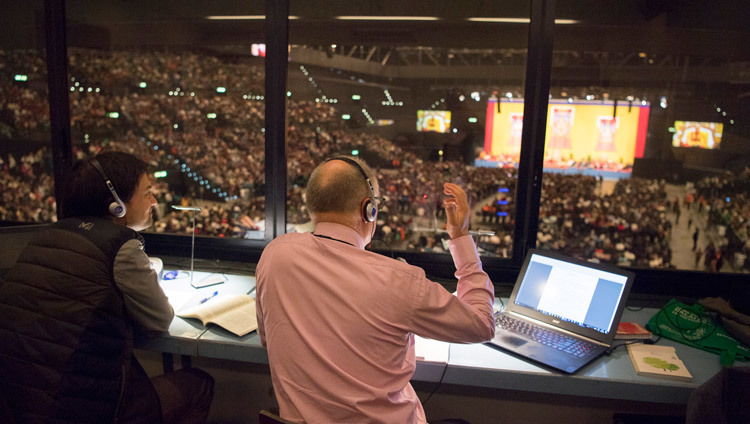 His Holiness remarked that he had been in Bodhgaya talking to the Sakya Abbot Sangye Tenzin who told him he had received transmission of ‘Stages of Meditation’ from a Khampa Lama who gave it sitting on Shantarakshita’s throne.

“I immediately felt compelled to ask him to give it to me too,” His Holiness said. “It was composed in Tibet by Kamalashila at the explicit request of Emperor Trisong Detsen and I feel it has a special significance for our cause.”

His Holiness read the ‘37 Practices of a Bodhisattva’. He recommended that those who had taken part in the bodhichitta ceremony should recite three verses from the ‘Precious Garland’ daily:

May sentient beings be as dear to me as my own life,
And may they be dearer to me than myself.
May their ill deeds bear fruit for me,
And all my virtues bear fruit for them.

As long as any sentient being
Anywhere has not been liberated,
May I remain [in the world] for the sake of that being
Though I have attained highest enlightenment.

as well as a verse from ‘Fundamental Wisdom’:

His Holiness noted the strong links Tibetans have had with Switzerland—the first country after India to allow Tibetans to settle. He also gratefully recalled the great help Tibetans had received early on from the Swiss Red Cross. His final advice to his listeners was that they should be 21st century Buddhists, not relying on blind faith alone, but developing an understanding of the profundity of what the Buddha taught.

Leaving the stage His Holiness stopped in the cold outside to pose for photographs with the volunteers and staff of the Tibetan organizers of the event before driving back to his hotel.