Delhi, India - For this year’s teachings for Russian Buddhists more than 1300 people gathered in Delhi from Kalmykia, Buryatia, Tuva, Russia, Mongolia, Tibet, Estonia, Ukraine, Kazakhstan, Kirgizia, Lithuania, Belarus and several other countries. Before joining them this morning, His Holiness the Dalai Lama gave a short interview to Oksana Shemleva of Russian Television’s Channel 1.

He told her that in the world today we need to develop a greater sense of altruism.

“The book I’m reading now with my Buddhist brothers and sisters here is one of the best sources of instructions on how to do this. We also need wisdom. We need to analyse reality and, just as quantum physics tells us that things have no objective reality, the Indian Middle Way School tells us that although things appear to exist independently, nothing actually exists that way; nothing exists as it appears. I advise those Buddhists who come to listen that they need to be 21st century Buddhists, understanding what the Buddha’s teachings are about not just on the basis of faith but also on the basis of reason.”

Shemleva explained that in Russia people like to have amulets and asked what His Holiness recommends for people to be happy. Answering that that’s up to the individual, he added that real blessings come from your own heart rather than from material things.

“A famous Tibetan practitioner, Milarepa, lived like a beggar with no possessions at all. Once when a thief crept into his cave at night he laughed and called out if I can’t find anything in here during the day, what makes you think you’ll find anything at night? Developing the mind doesn’t depend on external trappings. The Buddha too spent six years in serious meditation without any possessions, not even a rosary, and attained enlightenment.

“A wealthy Bombay family once came to see me to request my blessing and I told them it’s a mistake to look for blessings outside yourself when the real blessing is in your heart. I suggested that since they were well-off they should use their wealth to provide educational opportunities for people living in Bombay’s slums. That would be a real source of blessing.”

Asked about friends he has made around the world, such as Mikhail Gorbachev in Russia, His Holiness replied that he cherished all his friends. He said that as a human being he feels that friends he’s made are friends for life.

In a world in which someone being killed by a tiger or an elephant is news, but human beings killing each other attracts less attention, His Holiness said we have to remind ourselves that all 7 billion human beings are our brothers and sisters. Challenges like climate change don’t affect some countries but not others, they affect us all. He said we need education to promote the oneness of humanity.  We forget that we are all born the same way, that we are physically, mentally and emotionally the same.

Shemleva asked about the state of Buddhism in Kalmykia and Tuva. His Holiness explained that since he is presently unable to go to Russia, some Russian Buddhists eager to hear his explanation of the Buddha dharma have come to listen to him in India. Others who can’t afford to come so far have come to Latvia, where earlier this year he taught the second chapter of Dharmakirti’s ‘Commentary on Dignaga’s Compendium of Valid Cognition’. He explained that he had chosen that difficult text because he had been impressed to hear that a translation into Russian had been attempted during the early 20th century. 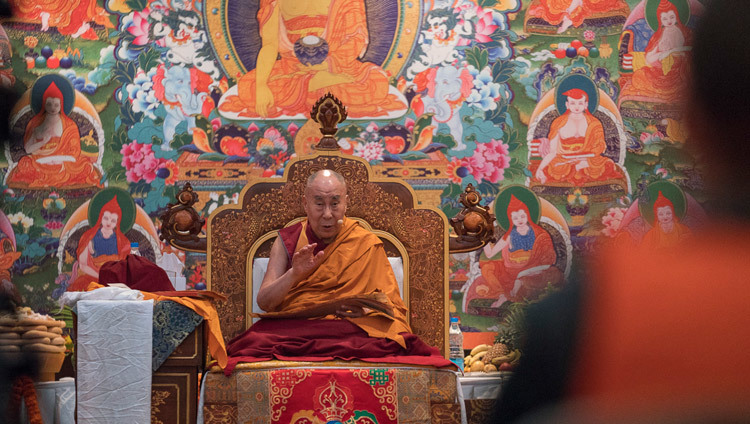 Taking his seat in the teaching hall, His Holiness explained that it was just after 9 o’clock and by teaching until 11 o’clock he hoped to finish the book and lead a ceremony for generating the awakening mind of bodhichitta. After that there would be an opportunity for groups to have their photographs taken with him, but, he stressed there would be no ‘blessings by hand’.

“There was an old Amdo Lama,” he recalled, “who was invited to teach somewhere. He told those extending the invitation that he was really too old to come. They replied that if he couldn’t come to teach, it would be all right if he just came to give blessings. Thus, they were surprised when he not only came, but he gave an extensive and profound teaching. At the end he remarked, I’m not the kind of Lama to place my contaminated hand on other people’s heads. I’m the kind who teaches what is to be adopted and what abandoned, which can at least be of some help.”

His Holiness mentioned the ‘Heart Sutra’ and that it is one of the shorter Perfection of Wisdom sutras. He explained how the dharani it contains can be taken to indicate the five paths. ‘Gate’ indicates the path of accumulation. The second ‘Gate’ represents the path of preparation, during which the practice of concentration and insight are combined. ‘Paragate’ indicates the path of seeing on which the practitioner achieves insight into emptiness and becomes an Arya. ‘Parasamgate’ signifies the path of meditation, ‘Bodhi’, enlightenment, while Svaha represents laying the foundation.

His Holiness resumed reading Chapter 9 of the ‘Guide to the Bodhisattva’s Way of Life’ at an energetic pace, pausing here and there to comment. At verse 54,

Emptiness is the remedy to the darkness
Of afflictive and cognitive obscurations;
(So) how can someone wishing for Omniscience quickly
Not meditate on it?

he quoted the first verse from Chapter 22 of Nagarjuna’s ‘Fundamental Wisdom’ which he uses himself, applying what it says to himself rather than to the Tathagata.

He remarked that he finds this an effective way to meditate on selflessness. 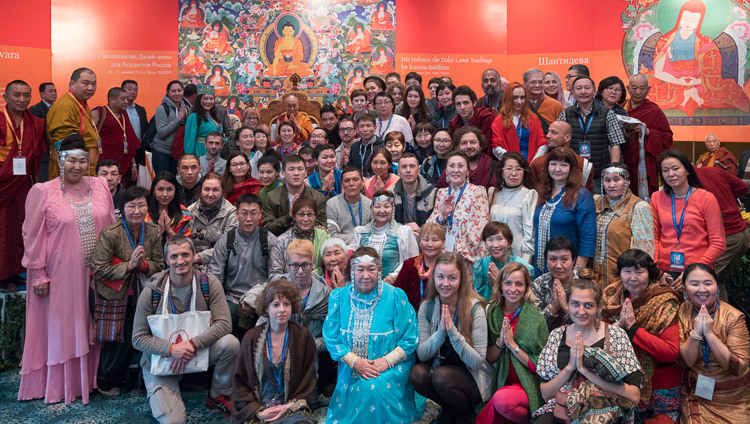 What he read in the text prompted His Holiness to report that he has asked scientists at what stage the organization of particles becomes a basis for consciousness, but he has not yet received an adequate reply. He also recounted asking whether if a perfect womb, a perfect egg and a perfect sperm come together, the conception of a conscious being will automatically come about. Scientists concede that it will not, but have no explanation why. Buddhist writings suggest that an additional factor—consciousness—is involved.

Once his reading of Chapter 9 was complete, His Holiness read swiftly through Chapter 10, which deals with the dedication of merit. Having finished the book he turned back to the beginning and formally read the opening verses again.

Adopting the well-known verse for taking refuge in the Three Jewels and generating bodhichitta as the basis, His Holiness led the audience through a brief ceremony for generating the awakening mind. He reminded them that the mind we have now can become the mind of a Buddha. He gave transmission of the mantras evoking the Buddha, Avalokiteshvara, Manjushri and Arya Tara, before making his final remarks.

“Read this book whenever you have time and study it. If you do that you’ll find, year by year, that you gradually become more relaxed and calm. I look forward to meeting some of you again in Latvia.”

Tomorrow, His Holiness travels to Bodhgaya, where he will grant the Kalachakra Empowerment for the 34th time.