Delhi, India - As he stood on the throne, His Holiness the Dalai Lama waved to the people at the back of the hall. Once he was seated he suggested not reciting the entire ‘Heart Sutra’ but only the mantra with its accompanying verse, followed by the verses of homage from ‘Ornament for Clear Realizations’ and the homage from ‘Commentary to Dignaga’s Compendium of Valid Cognition’. 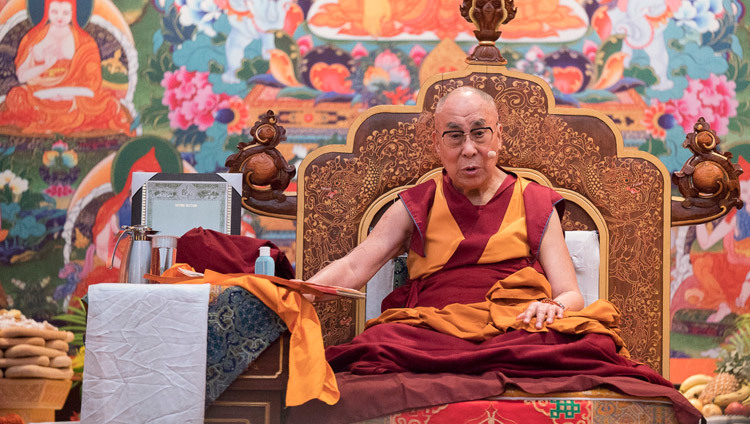 “When I give this kind of discourse,” he said, “I like to give an introduction to the Buddha’s teachings and how to go about practice. In Tibet in the past and maybe even in China now, there are people with faith in Buddhism, who don’t really know what it is about. All religions teach about love and compassion, tolerance and contentment and have long been of benefit. But among them, Buddhism is the only one to teach explicitly about selflessness.

“A German neuroscientist once showed me a picture of the brain and told me that if there were a controlling self or soul it should be there, but nothing indicates such a self. In fact, since neurons in the brain function in non-centralized networks, it seems science supports the Buddhist assertion.”

Speaking in Tibetan that was simultaneously translated into Russian, Mongolian, Chinese, Hindi and English, His Holiness added that what qualifies the Buddhist view are the Four Seals:

Disturbing emotions and karma are in the nature of suffering. Their cause is ignorance, the distorted view by which we think of the impermanent as permanent, what is without self as with self, and what is miserable as pleasant. The root of this is holding onto the distorted view of an autonomous self. 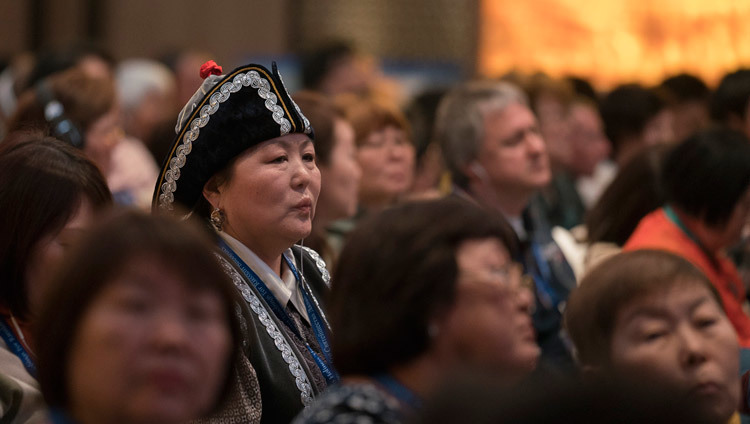 Contrary to this is the unique Buddhist assertion of interdependence. It seems obvious that an effect is dependent on a cause, but the reverse is also true because a cause is only a cause because it gives rise to an effect. Similarly, not only is the whole dependent on its parts, but the parts are dependent on the whole.

In contrast to this approach to the teachings of the Buddha, the ‘Stages of the Path’ refers to impermanence, the value of human life, and the practice of taking the essence of this life, culminating in developing the determination to be free. As the ‘Three Principal Aspects of the Path’ advises we need to turn the mind away from the attractions of this life and the pleasures of future lives and develop the determination to be free. Citing Vasubandhu, His Holiness said there are only two ways to preserve the teachings—study and practice.

Further citing Nagarjuna, His Holiness clarified what emptiness means. When we say ‘form is empty’, it is not form that is negated, but the idea that it somehow exists inherently. Encouraging his listeners to look at Nagarjuna’s ‘Fundamental Wisdom’ themselves, he recommended reading Chapter 26 - Examination of The 12 Links of Dependent Origination first, then Chapter 18 - Examination of Self and Phenomena, followed by Chapter 24 - Examination of the Four Noble Truths. 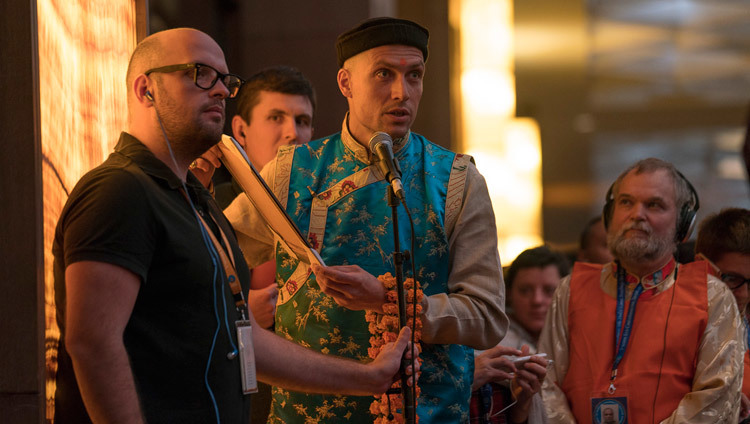 Reading Chapter 9 of ‘Guide to the Bodhisattva’s Way of Life’ up to verse 37, His Holiness stopped to invite questions from the audience. The first was about what can be done for a friend who has died. The answer was to cultivate the awakening mind of bodhichitta and dedicate the merit to his good rebirth. Another member of the audience announced that it was Christmas and that he was offering His Holiness a picture of Russia’s most sacred monastery. He also wanted to know what the best practice is at the time of death. His Holiness told him that when you are about to die, it can be helpful if you are enveloped in an atmosphere of love and affection. Being surrounded by gold and other possessions will be of no help at all.

When asked whether it could be appropriate to view Jesus Christ as a kind of bodhisattva, His Holiness replied that from a Buddhist point of view, considering how beneficial he has been to so many for so long, he could indeed be regarded as a bodhisattva.

His Holiness told a young woman, who is already studying Buddhist logic and epistemology and who wanted to know how to make it less dry, that she should consult a variety of books and compare their points of view. Referring to his own practice of more than sixty years, he told her not to do this in a hurry, but over an extended period of time. He told her develop conviction and to integrate her experience within. He quoted Gendun Drup, the First Dalai Lama as saying that if you don’t use what you learn to combat your negative emotions it’s like performing a ritual in the west to counter an evil spirit in the east. His Holiness commended the recent ceremony in Drepung at which the first twenty nuns were awarded Geshe-ma degrees. 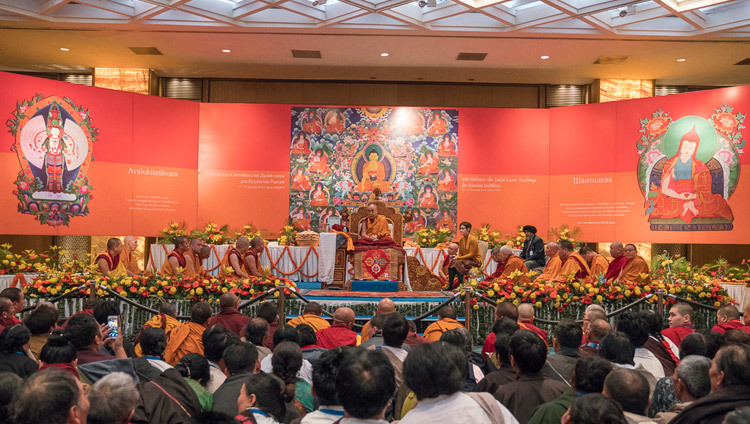 Finally, a member of the volunteer staff informed His Holiness of the tragedy yesterday when a military plane with 92 people on board, including more than 60 members of the internationally renowned Red Army choir, crashed into the Black Sea and asked him to pray for the victims.

“Of course I’ll pray for them,” His Holiness responded. “And you do so too. You can also cultivate the awakening mind of bodhichitta and your understanding of emptiness and dedicate the merit to the victims. You might also like to recite the mantra of Akshobhya:

“Thank you for asking about this.”

There will be a third session of teachings tomorrow morning.