The 600th Anniversary of the Founding of Drepung Monastery December 21, 2016

Mundgod, Karnataka, India - This day of celebration began early with the rumbling of long horns before His Holiness the Dalai Lama descended to the assembly hall of Drepung Lachi Monastery. The Ganden Tripa, Ganden Trisur, Sharpa and Jangtse Chöjeys, with the Drepung Abbots and about 1500 monks, led by the thunderous voice of the chant-master, offered His Holiness a Long-Life Ceremony. At a certain point the Nechung Oracle appeared and during a long trance paid homage to the eminent Lamas and approached His Holiness several times. 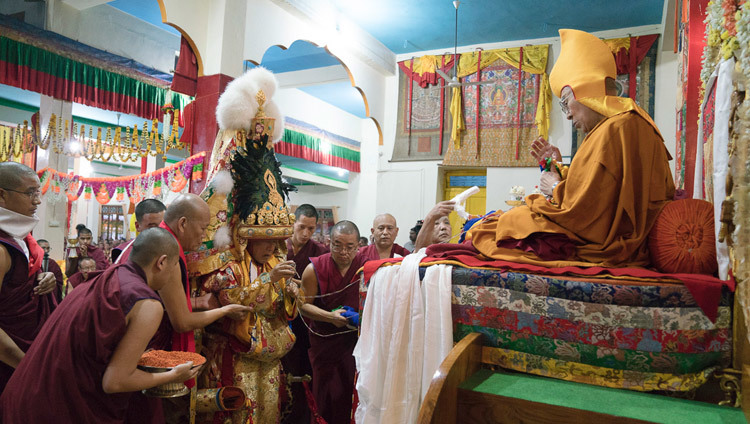 “I’ll be talking again later,” His Holiness told the assembly, “but since we are celebrating the founding of Drepung Monastery by Jamyang Chöjey Tashi Palden, I’d like to say a few words here. This Long-Life Ceremony was different from those routine rituals performed when, as a child, I was facing an inauspicious year, because the whole community has been involved.

“As a child I was placed on the throne of the Dalai Lamas and I feel I have a karmic connection with them that goes back to Trisong Detsen. At this crucial juncture in our history I feel I’ve been able to make some contribution to the Tibetan cause and the welfare of our religion and our people.

“The recent Symposium held here revealed that we now have monks and nuns who have acquired quite a high standard of modern education in addition to their traditional training.

“You’ve made prayers and I also pray that I’ll live long. If no one were to listen to what I have to say, there’d be little point, but I’ve made suggestions and you’ve followed the advice. You’ve worked and studied hard so if the Bodhisattvas and the 17 Masters of Nalanda were to look to see what we’re doing I think they’d be satisfied that we are keeping our traditions alive.

“Nechung insists that I should live to 108 and that sounds auspicious, but whether the Lama lives long depends on the conduct of the disciples. Please keep up your studies.”

After a short intermission, celebrations resumed on the veranda and courtyard of the monastery. His Holiness lit a large silver lamp to inaugurate events and the chant-master recited auspicious prayers. The Drepung Throne Holder, Lobsang Tempa, presented a concise biography of Jamyang Chöjey Tashi Palden and released a short book ‘The Divine Drum’ to commemorate the founding of Drepung. 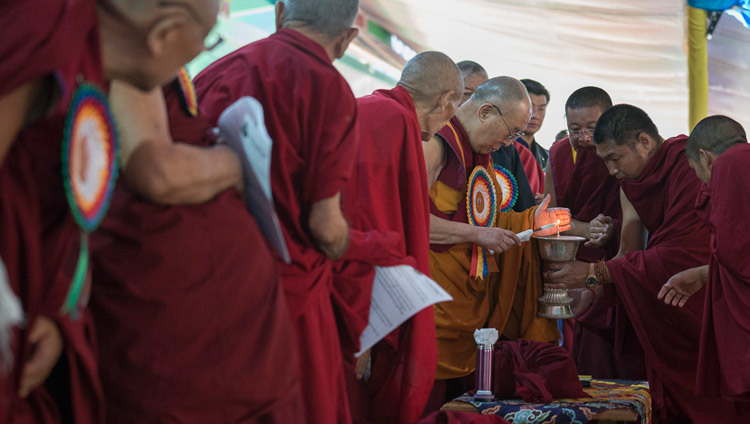 Actor Gagan Malik, who is one of the Monastery’s benefactors, briefly explained how playing the role of the Buddha in a film about him had opened his eyes. He said he had become a Buddhist because he was so impressed by the Buddha’s aim to put an end to suffering in the world. He added that when he realized that the Buddha was born in India and that Buddhism had originated in India, but was relatively little known in the land of its birth, he had vowed to redress that lack of awareness.

Telo Tulku, His Holiness’s Representative in Russia read out letters of congratulation to Drepung Monastery from the Presidents of the Republics of Kalmykia and Tuva that recalled the start of relations between their peoples and Tibet in the time of the Third Dalai Lama.

Kalon for Religion & Culture Ven Karma Gelek spoke next noting that Drepung is a significant monastery within the Tibetan community because of the contribution it has made to preserving the tradition of Je Tsongkhapa. He offered greetings to all the Drepung monks. He recalled that after the havoc that overwhelmed Tibet in 1959 about 300 Drepung monks made it into exile and became the core of the re-established monastery. He urged those who would be receiving their degree certificates today to work similarly hard to preserve the Dharma into the 21st century. He concluded with a wish that His Holiness live long and the Dharma spread wide.

Next the DC of Upper Kannada SS Nakul spoke, telling the audience that he felt the Tibetan community here to be part of his life since he had grown up in the vicinity. He announced that on this auspicious occasion of Drepung’s 600th anniversary he and the Settlement Officer would be signing a formal Land Lease Agreement with regard to the Mundgod settlement. We are ready to support you, he proclaimed. 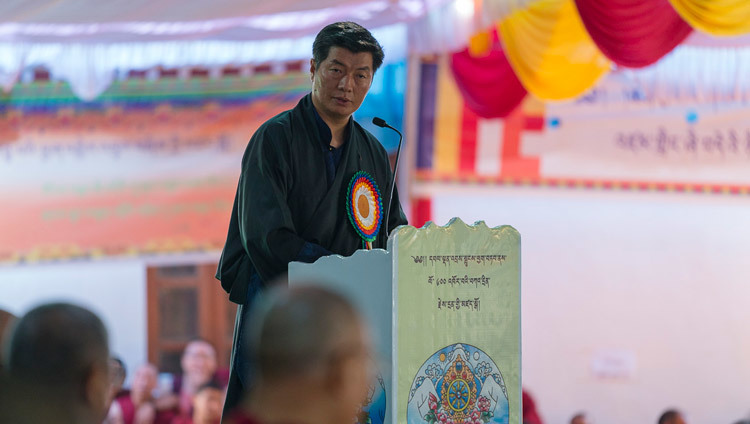 In his remarks, the Sikyong, Dr Lobsang Sangay, thanked the DC for his part in securing the agreement. Alluding to the Emory Tibet Symposium that he had attended, he said that thanks to His Holiness’s inspiration Tibetans are in a better position to share the Nalanda tradition that flourished for more than 1000 years in Tibet with the world. The Speaker of the Tibetan Parliament in exile, Khenpo Sonam Temphel, remarked that when they first came into exile, Tibetans knew only the sky above and the ground below. Thanks to the kindness of His Holiness and people like Mr Nijalingappa they had done well.

In his speech the Ganden Tripa also recalled that when Tibetans came into exile they had no idea that it would be for so long. They thought they would soon return home. He prayed that those in exile would be re-united with Tibetans in Tibet before long.

Drepung Lachi Committee presented His Holiness with a replica of the right coiled conch unearthed by Je Tsongkhapa as a token of gratitude. They were followed by Dagyab Rinpoche who released a book in two volumes about the Dalai Lamas entitled ‘Gyalwai Gongsel’. Copies were distributed among guests and dignitaries.

For nearly an hour, a long procession of Lharampa Geshes who had earned their degrees 2012-15 wound round the edge of the courtyard and up onto the temple veranda where the Ganden Tripa gave them their certificates. They then gathered in groups to have their photograph taken with His Holiness. Successful candidates for Lobpon and Karampa Geshe received their certificates from Jangtse Chöjey. There were more than 700 altogether.

When His Holiness was finally called upon to give the keynote address, he acknowledged all those who had already spoken, stating that he agreed with them. 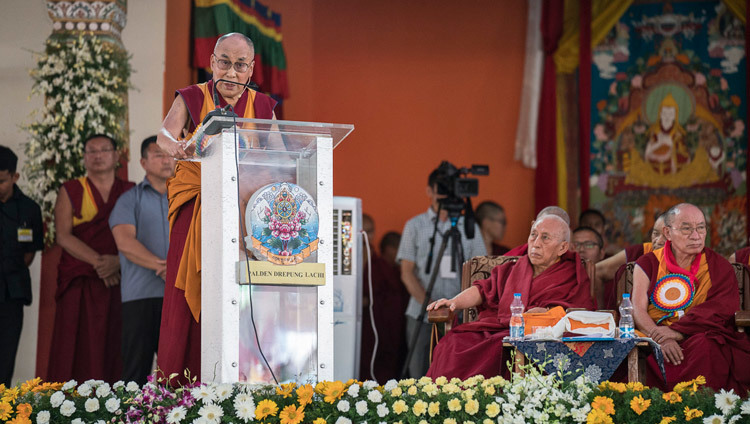 “My Dharma brothers and sisters, what is the purpose of your studies? Not the attainment of name and fame, but, as the mantra of the Heart Sutra tells us, to progress through the five paths and the Bodhisattva grounds. Je Rinpoche said, ‘I studied, I reflected on what I learned and I put that into practice. And what I’ve done I’ve dedicated to the flourishing of the Dharma.’ This is what you too should do. The purpose of study is to tame the mind to soften up and reduce our disturbing emotions prior to eliminating them altogether.

“After you study the thing to do is engage in the practice of meditation as Trehor Kyorpon Rinpoche has done—keeping the Dharma alive through learning and practice. Gendun Drup similarly spent time as a hermit at Jangchen Ri before coming down to establish Tashi Lhunpo.”

Referring to the recent science Symposium, His Holiness expressed satisfaction that there are now monks and nuns who have acquired the two wings of modern as well as traditional education. He said this is consistent with the Buddha’s advice to examine and test his teachings as the wise test gold, rather than just taking them for granted because he gave them. He also mentioned his reclassifying the contents of the Kangyur and Tengyur under categories of Buddhist science, philosophy and religion, with a view to the first two being studied in an academic way by anyone interested.

In connection with the awarding tomorrow of Geshe-ma degrees to nuns who have earned them, he said the Buddha gave equal opportunities to nuns and monks. However, the Bhikshuni ordination had not been established within the Mulasarvastivadin tradition in Tibet.

“This is not something that can be changed by a single person like me. A consensus of the monastic community is required. There is said to be an unbroken Chinese lineage and another in Vietnam. The upholding of the Vinaya, monastic discipline is virtually the same in the Pali and Sanskrit traditions, but introducing change requires a consensus.

“As far as studies are concerned I have been able to exert some influence. Forty years ago I encouraged the nuns of Geden Chöling to begin to study philosophy. They did and others followed. Now, for the first time nuns will be awarded Geshe degrees. When it was first known that nuns were going to study, there were some old monks who were reluctant about it. Later, when they were ready to receive degrees some monks resisted. I argued that if they had completed the study—and many have studied for 20 years or more—they should receive the reward. I want to repeat that the study of logic and philosophy is very important. “

The Abbot of Gomang Monastery proposed a vote of thanks. He thanked the various dignitaries and guests for attending the occasion. He called on Nechung to continue to protect the monastery and its monks. He concluded with the wish that His Holiness and the great masters live long for the benefit of all sentient beings.

Everyone present was invited to a sumptuous lunch.