Yokohama, Japan - On a brilliant, warm autumn day in Yokohama, His Holiness devoted his entire morning to a series of audiences, both private and collective, with Buddhist groups from Tibet and Korea and Mongolia, all of whom had traveled great distances to see him. Meeting 150 or so Tibetans who had gathered in long rows on the floor to greet him, holding up pictures of the Buddha, wiping away tears, joining their hands in prayer as he spoke, he stressed how much of Buddhist philosophy, so vast and so profound, is preserved only in the Tibetan language. Sanskrit, after all, is dead, and neither Chinese nor Hindi contain these texts.

So the Tibetan language is indispensable for all serious Buddhists, especially in the Nalanda tradition. And Buddhist philosophy, as well as Buddhist psychology, are very much in demand in today’s world. So a living Tibetan is similarly essential for all of the globe. Buddhism does not suggest that redemption comes from a Creator and devotion to that Creator; it emphasizes “training of the mind,” and the way in which we are all makers of our own destiny. So he urged the Tibetans to sustain their spirit, their language and their philosophy. 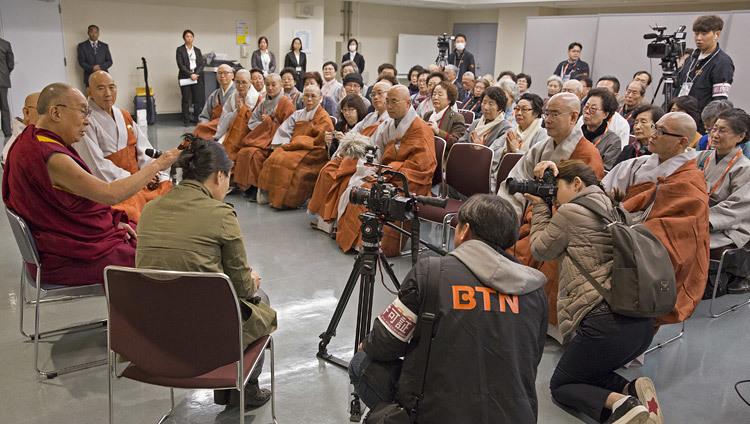 When His Holiness met a group of Koreans, including the head of the Council of Elders and other senior monastics from the Jogye order, which represents 95% of Korea’s Buddhists, the leader of the delegation apologized for the fact that His Holiness had only a simple chair to sit on. “I like to be on equal terms,” His Holiness replied with vigor. “Even the Buddha gave talks sitting on rocks or in forests. He never ordered others to bring him food; he went on rounds himself, with his bowl extended.”

With that, he walked into the huge, ultra-modern Pacifico Yokohama Hall, packed to the back of its balcony and second balcony, to deliver a public talk on “Compassion: The Key to Happiness.” Standing at a podium, His Holiness began with a short discourse on his fundamental principles and the need, in a world of violence, to go deeper than divisions, to a human level where we all are one. Unification, union, oneness were his themes all day, whether speaking of the political unit that is the European Union or what unites us all as human beings. 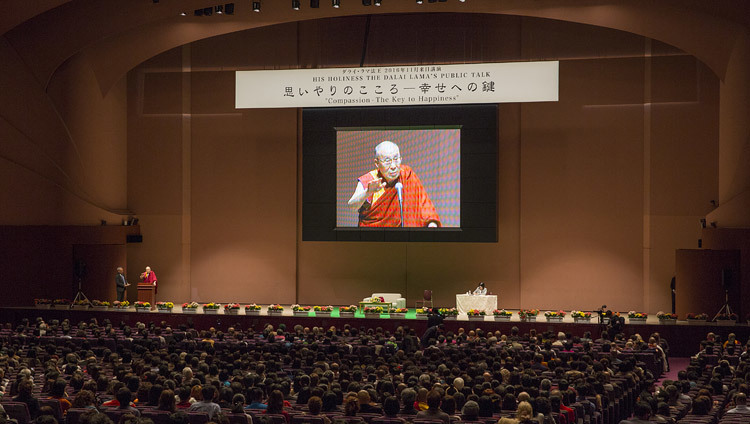 “When you are dying,” said His Holiness, “an expensive diamond ring is not going to help you. But a friend, a group gathered round you in a spirit of love and compassion, that can really help.”

Expanding on that notion of an inner, an invisible diamond ring, as one might call it—the jewel of inner values, which pays dividends in terms of happiness and peace of mind--he stressed again and again the power of the mind to lead us towards true joy. “Religion exists only in human society,” he pointed out, which suggests that we can use our intelligence to find reasons to be compassionate. “Study” was his other insistent theme. “Use your mind and the great texts to do things that no other animal can imagine.”

Opening the floor to questions—and urging the questioners to be informal and even critical, since “I love criticism! Because then I have to try to give reasons for my thinking!”—he found lines of thirty or more people in either main aisle, waiting to ask him about how to overcome anger, how to find peace of mind, how to awaken the Buddha nature.

Questioned about the deluge of information these days, which can make it hard to forget bad news, he pointed out that world affairs are always negative and positive. “There’s no reason to be demoralized. Some bad things may be there, but there are many reasons to be happy and grateful.”

Again and again, he stressed the powers of the mind. When one foreigner asked him about how to teach the power of listening, he reminded the questioner that Buddhists don’t believe in getting some lesson from another person. “As the Buddha said, `You are your own master.’ “ At another point, he cited a saying in Tibetan: “Wisdom from hearing, wisdom from thinking, wisdom from meditation.” 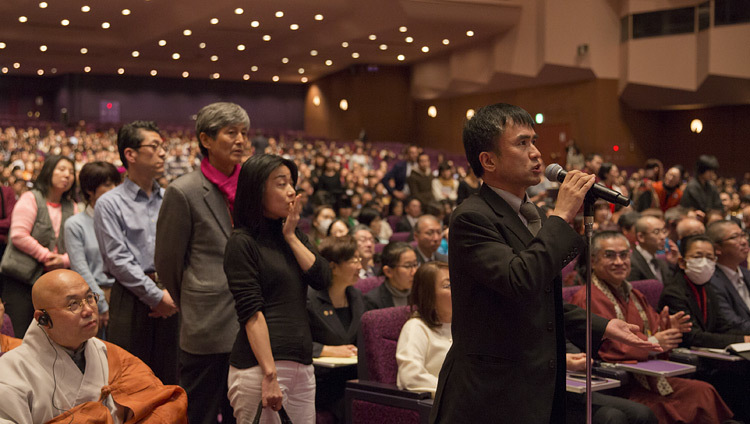 Real joy doesn’t come from sensory experience, which doesn’t last, but from training of the mind. Music, for example, makes us happy while it’s playing. And then it stops and our happiness fades. But the kind of joy that comes from meditating on emptiness need never die.

Be realistic, he told the audience: the minute we are born, we start to die. Study and investigate and look to yourself. And never forget self-confidence. As one Japanese woman after another came up to the mic, one to ask about suicide, another one pregnant and worried about the world that awaited her child, His Holiness looked at them with great affection and advised them not to worry.

He had visited the Fukushima area in northern Japan after the tsunami and nuclear disaster that devastated the area in 2011, he said, and there was nothing there. Then he went back and found people were already beginning to build houses and bring the region back to life again. “So long as you say, `I give up,’ “ he advised, “you can’t do anything at all.” But so long as you recall the potential of the mind, so long as you study and listen and turn to the abiding sources of wisdom, you will never forget that you can do almost anything at all.