Tokyo, Japan - Long lines of junior high-school boys, immaculate in their formal, dark-blue uniforms, and visibly excited, had formed to greet His Holiness as he arrived at the Setagaya Junior High School in Tokyo on a cool, grey morning. The Tibetan flag was flying on every side, and a banner in English above the school’s entrance read, “We are Honored to Welcome H.H. Dalai Lama the 14th to Setagaya Gakuen.” Teachers watched the arrival from a third-floor walkway, under the school’s more than apt motto, “Think and Share.” 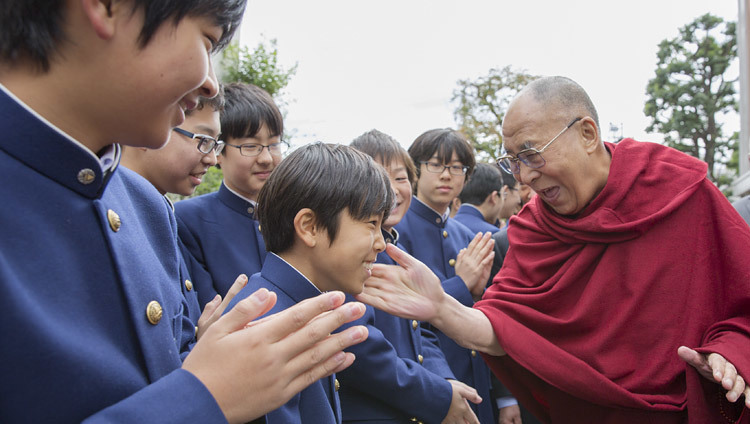 His Holiness took pains to greet almost every boy in the lines, tickling some, pulling the earlobes of others, leaning down to hold a small boy on crutches and to ask him what was wrong. Later he would say, “Your young, fresh, bright faces make me feel young again!”

After meeting some of the school’s officials—with three little boys in monks’ robes bringing him tea and cookies—His Holiness stepped into a jampacked wooden gymnasium in which—as on his previous trip to the school, some years before—every last seat in thirty long rows was occupied by silent, attentive young boys. “My English is very poor,” he began, “but I’m often suggesting that Japanese students should try to learn English. That way you can make an even greater contribution for the benefit of other people. And you can get more self-confidence. Traveling, you can realize that your own country’s conditions are really very good.”

Then he said simply, “You are the basis of our hope. Past is past; no one can change what happened. But in the future there is still hope, possibility.” Recalling the wars that had broken out throughout his life—since the rise of Nazi Germany and the Sino-Japanese Conflict in his earliest years—His Holiness explained how we can work for peace in an active, concrete way, instead of perpetuating the cycle of violence. “Many of my elder brothers and sisters here and I,” he said, “may not see a more peaceful and happier world. It’s not easily achieved. But in the next thirty or forty years, yours is the generation that can make a significant contribution to a more harmonious world.” 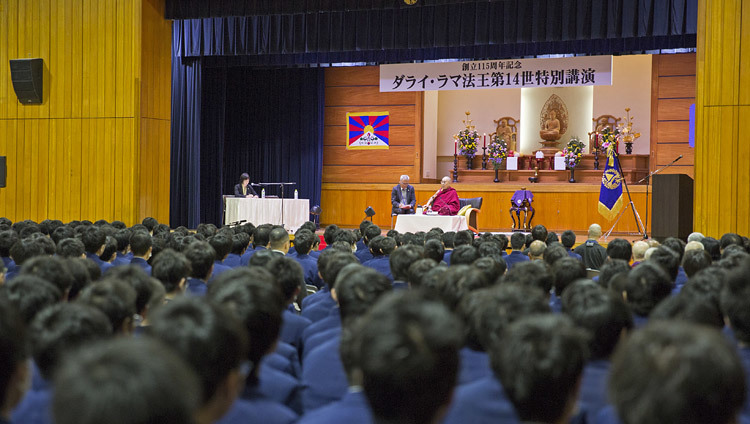 As his answers were translated, His Holiness peered intently into the crowd, making eye contact with some students, smiling at others, observing responses in every corner. “Violence always destroys lives,” he says. “The people who indulge in violence may get some temporary satisfaction; but deep inside they won’t be happy. Perhaps at the end of their lives, they will feel uncomfortable. Nobody wants problems, but we create many problems. Why? Because we can be short-sighted and narrow-minded.” Even trouble-makers, after all, are born to mothers and “raised with the seed of compassion.” Schools should therefore attend not just to material values but to inner values. “Not through religion, but through common sense, common experience and scientific findings.”

When His Holiness opened the session up to questions, the students were shy for a second, and then, almost instantly, lines of forty or more clamorously formed on each side of the gymnasium, reaching almost to the back of the large space. The boys’ questions cut to the heart of things: how can one cure aggression and anger? Must religion involve strictness? What is the meaning of life? His Holiness gave crisp direct answers, handling many questions from both sides of the hall. He stressed motivation—the difference between aspiring to succeed and hoping that others fail. He pointed out, in answer to a question about “destiny,” that “Karma means action. So, till yesterday, you had a certain destiny due to prior karma. Today you’re creating new karma, more forcibly, that can change your destiny.” 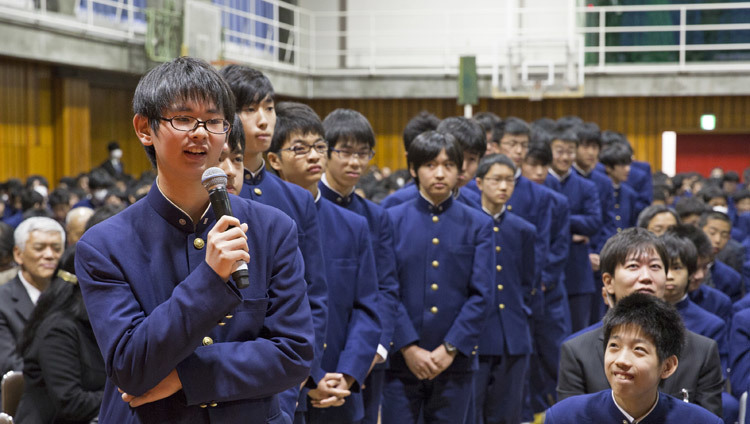 And in answer to a question about how a young student can hope to change the world, he said that it was more than possible. “The first thing is to develop peace of mind. And then spread it among your friends and family. And then, slowly and steadily as you grow in your profession, whatever that might be, it will help. Even in politics!”

Having spoken for more than two hours, His Holiness came down off the stage, taking care to greet many of the students in the front rows individually before taking lunch with the leaders of the school. Then he went straight to the Japanese parliament, to deal with real-life politicians. It was as if, having worked to bring meaning and wisdom to the leaders of tomorrow, he was now bringing his vision to the power-brokers of today.

As soon as he got out of his car at the gleaming, glassy, nine-story Front Office Building for the Japanese House of Representatives, in the heart of skyscraper Tokyo, His Holiness was greeted by loud applause from a large group of formally dressed politicians. Members of five different parties had gathered to welcome him, and when he stepped into a meeting hall, it was to be greeted again by spontaneous clapping, and a thronged audience of more than 200 policy-makers, part of the Japan-Tibet Parliament Group. It was the third time His Holiness had addressed Japan’s parliamentarians officially, and, according to a speech from one, each time saw more and more people in attendance. 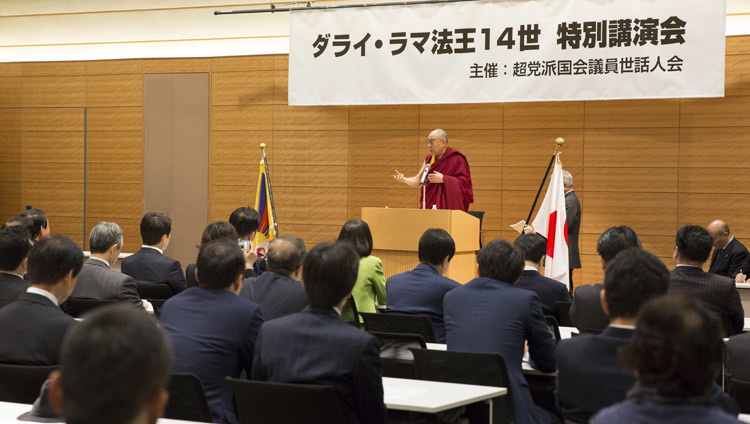 A few Japanese politicians opened the event by speaking about how the Tibetan leader had touched their hearts, about visiting him in Dharamsala, about how Japan as a whole can and should work to help bring peace to the world and to think about religion and humanity, especially given the many age-old ties between the cultures.

Then His Holiness, speaking from a podium, spoke more about those ties and about his lifelong commitment to democracy. As a human being, he was fully committed to his 7 billion fellow humans. As a Buddhist monk, he was committed to a universal message of love, of tolerance, of forgiveness. And as a Tibetan, though he had retired from political life, he was committed to trying to preserve one of the world’s ancient cultures, a rich heritage of knowledge and the environment.

“Politically,” he stressed, “we are not looking for independence. For economic and other reasons, we want to stay within China.” But the Tibetan issue was not just political. It was about the preservation of Tibetan culture, language and the environment. In answer to a series of questions, he emphasized, as ever, “The Chinese people we really admire, we really respect. They have a 5000 year-old culture, they are a very cultured people, hard-working, realistic.” The fact of so many people attending a Japan-Tibet Parliamentary Group, His Holiness concluded, was part of an almost universal commitment not just to Tibet, but to justice and truth.

As he left the hall, one formal-looking politician after another pushed forwards to say hello, to shake his hand, to thank him for his presence in the world and in the room.