Tibetan Pilgrims Listen to His Holiness the Dalai Lama in the Tsuglagkhang November 30, 2016

Thekchen Chöling, Dharamsala, HP, India - When His Holiness the Dalai Lama met about 1000 pilgrims from Tibet today, many in traditional attire, their faces bright with anticipation, he told them that since they had come to India on pilgrimage or to visit relatives, he thought he would talk to them about Buddhism before they returned home.

“Buddhism spread the length and breadth of Tibet,” he told them, “but not that many people really understand what Buddhism is about. Our tradition comes from Nalanda, which was a great Indian centre of learning. The scholars there could analyse and explain Buddhist philosophy extensively using logic and reason. 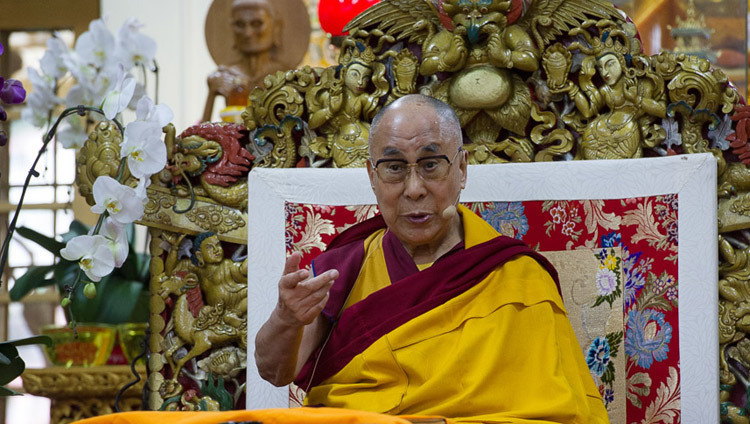 “In Thailand, Burma, Sri Lanka and so on they follow the Pali tradition. They purely maintain the monastic discipline of the Vinaya. They teach the Four Noble Truths with their 16 characteristics and the 37 Wings of Enlightenment as we do. But they tell me that in their explanations they rely on the authority of scripture, rather than the fruit of reason.

“The Perfection of Wisdom teachings reached China as part of the Nalanda tradition, so the Chinese, along with the Koreans, Japanese and Vietnamese, recite the ‘Heart Sutra’ and read Nagarjuna’s ‘Fundamental Wisdom’. But the majority of Dignaga’s and Dharmakirti’s works on logic and epistemology were not translated into Chinese, so they don’t have a tradition of logical analysis. This is why, today, the Nalanda tradition is fully maintained only by Tibetans.”

His Holiness mentioned that at one time Chinese communist propaganda suggested that Tibetans had only blind faith in the Buddha’s teachings and it would wither when they gained a more scientific understanding. What has in fact happened is that scientists have become increasingly interested in a Buddhist approach, particularly concerning the workings of the mind and emotions. He mentioned that he has encouraged a reassessment of the contents of the Kangyur and Tengyur under three categories: science, philosophy and religion. Books have been published in Tibetan, translations of which are being prepared, presenting Buddhist science and Buddhist philosophy.

His Holiness alluded to the great material development that has taken place in many parts of the world, remarking that nevertheless people are still unhappy because they don’t know how to find peace of mind. He declared that an understanding of the workings of the mind and emotions as described in Buddhist psychology can be of practical day to day benefit.

“Among 1.3 billion Chinese, 400 million are Buddhists. We can serve them by making our Buddhist traditions available to them. I believe we have kept our traditions alive not merely for our own benefit, but for the good of the world.

“The Buddha advised us to know suffering, overcome its causes, and achieve cessation by cultivating the path. We should know that it is our untamed minds that cause suffering. Our minds are disturbed and undisciplined because of our disturbing emotions—while the actual nature of the mind is clarity and awareness.”

His Holiness referred to the painting of the wheel of existence that depicts the 12 links of dependent arising, the six realms of existence, the white semi-circle at the middle in which beings ascend and the black in which they fall. Right at the centre a cock and a snake, representing desire and hatred, emerge from the mouth of a pig that represents ignorance. He said that these three poisons cause us to perform negative actions which result in our continually turning through the six realms. The key to this is ignorance, which, as the first of the 12 links, is illustrated by a blind man.

“Once you see that ignorance is overcome by coming to understand reality, you’ll also see that it is feasible to achieve cessation. And when you understand that you’ll hatch the aspiration to do so by cultivating the path. This is how to practise the teaching of the Buddha.”

Noting how the first turning of the wheel of Dharma revealed the Four Noble Truths, the second vouchsafed the Perfection of Wisdom teachings and the third divulged the nature of the mind, His Holiness declared Buddhism to be a marvellous tradition.

“But we can’t just take it for granted. We have to study.”

Harking back to T’ang dynasty records, His Holiness recalled that Tibet was one of three great empires, along with the Chinese and Mongolian. He recalled that Songtsen Gampo maintained peaceful relations with the Chinese, taking one of their princesses as a wife and that Trisong Detsen’s mother was Chinese. There were other times when Tibet fought with China. However, since today China can bring necessary economic and material development to Tibet, there is benefit to be gained from remaining with the People’s Republic of China. But, he said, Tibetans must be free to preserve their culture and language and protect their environment. Despite the claims of hardliners in the Chinese government, this does not make him a ‘splittist’.

His Holiness acknowledged the difficulties and dangers the pilgrims had faced in coming to see him. And when he praised Tibetan determination and the unbowed spirit of the Tibetan people, many of them quietly wiped away tears. He told them that with its unique and valuable language and the rich culture of Nalanda that it has preserved, Tibet has much to be proud of, and he reassured them that this is what he tells other people around the world.

The discourse ended with His Holiness’s leading the congregation through a simple ceremony for generating the awakening mind of bodhichitta. Following that he also gave them transmission of the mantras of the Buddha, Chenresig, Manjushri and Arya Tara.