Bengaluru, Karnataka, India - After several days of rain and overcast skies, the sun came out today as His Holiness the Dalai Lama drove across Bengaluru to the National Law School of India University, an institution that offers undergraduate and graduate legal and policy education. He was received by the Vice-Chancellor, Dr R Venkata Rao and members of the faculty before being escorted into a hall filled by 400 students and faculty.

The Vice-Chancellor invited Professor of Law, Dr V Vijayakumar to introduce His Holiness. Touching on his early life in Tibet, he focussed on his efforts to introduce democracy in the Tibetan community and to reaching a peaceful rapprochement with China over Tibet. He also outlined His Holiness’s commitments to making people aware of the role of human values in the pursuit of happiness, the fostering of inter-religious harmony, the preservation of Tibetan language and culture and the protection of the delicate ecology of Tibet. 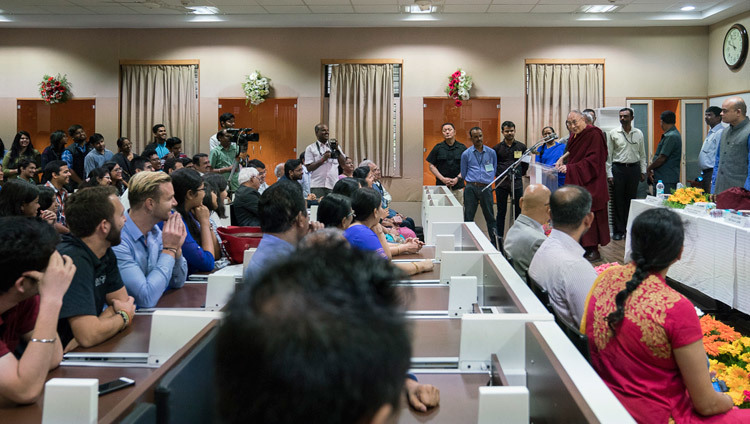 His Holiness began his address by telling his listeners:

“I usually stress that I am just one among 7 billion human beings, who are physically, mentally and emotionally the same. We all want to be happy. We don’t want to face problems. It’s our right to be happy. Physical comfort gives us temporary satisfaction on a sensory level. But if we have peace of mind, no matter what physical upset occurs, it won’t disturb us. Joy is something that takes place on a mental level. This is the same for us all, whether we take account of superficial differences of nationality, race, colour, religion and so forth among us, or not.

“When I visited South Africa, I went to meet people who lived in Soweto. I congratulated them on the opportunities they now had under the new democratic constitution. One of them, who said he was a teacher, hung his head and told me, ‘But we can’t compete with these white people because our brains are not as good.’ I was shocked. I remonstrated with him. I told him that any brain specialist would tell him there are no differences between black and white people’s brains. Eventually he conceded with a sigh.

“We Tibetans have suffered similar prejudice from hardliners among Chinese officials who consider us uneducated and beset by blind faith. However, experience shows that when we make the effort, we Tibetans are equal to Chinese. The key is to have self-confidence. I regularly encourage people who are trying to improve themselves to keep up their confidence and work hard. 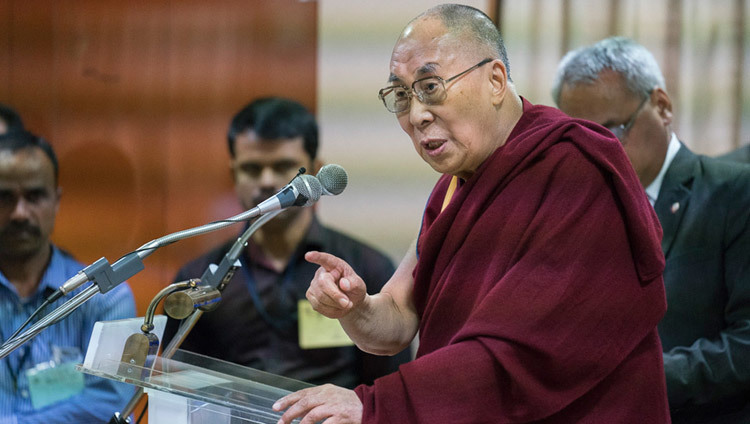 “Problems arise when we pay too much attention to the secondary differences between us. The solution is not to be found in acquiring money or weapons, but in cultivating a sense of the oneness of humanity. I tell people this whenever I get the chance.

“I also tell people all over the world that in India, the world’s most populous country many religious traditions live happily side by side, setting an example others would do well to follow.”

Repeating what had been said when he was introduced, His Holiness mentioned that not only has he retired from responsibility for Tibet’s temporal affairs and devolved it to an elected leadership, but he has also put an end to any future Dalai Lama’s taking on such a role. However, he made clear his concern for Tibet’s natural environment, not just out of consideration for Tibetans, but also for the more than one billion people across Asia who depend on water from rivers that rise in Tibet.

As far as Tibetan culture is concerned, His Holiness mentioned that before Buddhism reached them, Tibetans were mostly nomadic warriors. After the Tibetan Emperor invited Shantarakshita, one of the top scholars from Nalanda University, to establish Buddhism things changed. He was a good monk, as well as a sharp philosopher and logician. As a result of his endeavours the full Nalanda tradition survives today only among Tibetans who have kept it alive through rigorous study and practice. One consequence is that scientists today are eager to learn about the workings of the mind and emotions as described in ancient Indian texts. 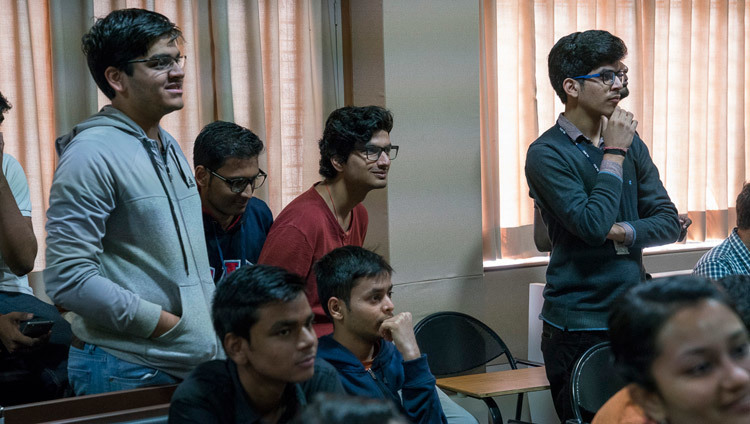 His Holiness told the students that while he and many of their teachers belong to the 20th century, a time that has gone, they belong to the 21st century and have the potential to shape the future of the world. If they try, they can ensure that in coming decades the world will be a happier more peaceful place.

“My job is to talk,” he teased them. “But yours is to act and bring about change.”

Fielding questions from the students, he told one who asked about the use of drugs among young people that having a better understanding of the workings of the mind and emotions was a more effective solution to problems. When another wanted to know what makes the Dalai Lama different from other people, His Holiness answered that he just considers himself another human being and when he’s unwell his doctor treats him that way too.

Answering a student concerned about what has been done for Tibetans, His Holiness explained that about 80,000 followed him into exile in 1959. Many had been resettled in Karnataka, where the main monasteries have also been re-established. He told him that the Tibetan spirit remains strong among those who have remained in Tibet. In 1979 contact opened with Deng Xiaoping, but it ended after the Tiananmen incident in 1989. However, he said even under a totalitarian system change continues to take place. 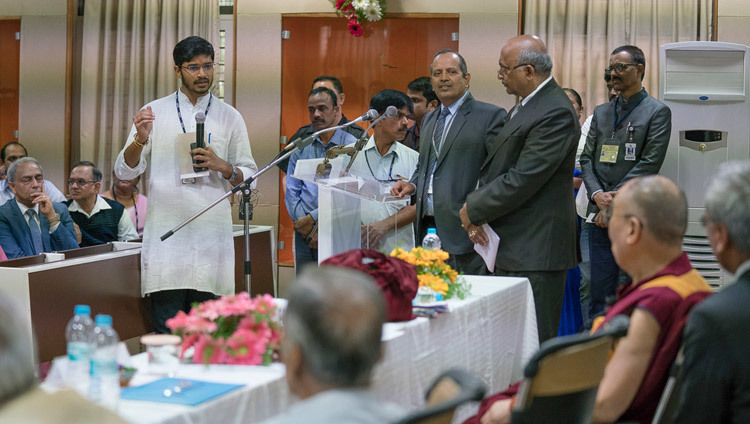 Asked how to reconcile a spiritual life with an emotional one His Holiness made clear that only Buddhism teaches an ‘anatman’ theory, that despite appearances persons and things lack any intrinsic existence. Analysing this reality for more than 60 years, he told her, had had a deep impact on his destructive emotions. These days, he said, he has hardly any sense of anger or attachment. This is a direct result of persistent analysis, not because of non-conceptual mediation, nor because his mind has become dulled.

Laughter ran round the hall when a young man asked the Dalai Lama, ‘What is the purpose of life?’ His Holiness told him it was to find happiness.

“We have no guarantee we’ll be happy, we just hope that we will. We hope we’ll overcome whatever problems confront us and if we lose hope we despair. Happiness corresponds with peace of mind and a key to that is warm-heartedness. Developing compassion brings courage and self-confidence; warm-heartedness and intelligence bring peace of mind.”

The Vice-Chancellor stepped up to the podium to express his appreciation of His Holiness’s talk. He requested Dr TV Subba Rao to propose a formal vote of thanks. He thanked Drs Venkata Rao and Vijayakumar for arranging His Holiness’s visit and acknowledged all the other people who had contributed to its success. He also thanked the students for coming to listen and asking their own questions. Finally, he thanked His Holiness for his talk, which he summed up as advising—

“If you want to find joy yourself; give joy to others.”