Osaka, Japan – On a chilly overcast morning, His Holiness the Dalai Lama was welcomed at Seifu High School by Hiraoka Hidenobu, the Director. More than 3000 students and staff eagerly awaited him on the school playground. On his way to the stage His Holiness stopped frequently to greet the students. Once he had sat down, the students recited ‘The Heart Sutra’. 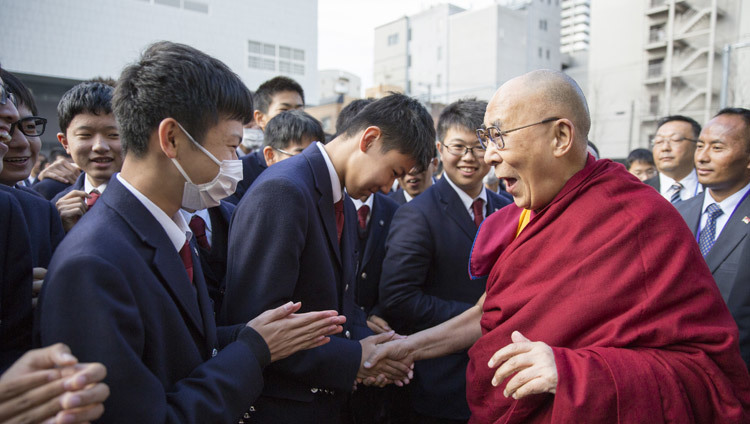 To begin with, His Holiness greeted all those present and told them how happy he was to be able to meet them again. He told the students that while they could not change the past, they could shape the future. How they conducted themselves today would affect the future. He advised them that as members of the 21st century generation it was important for them to take a far-sighted, holistic view of the future. He said he had great hopes for today’s youth.

“If the 20th century had been happy, we could continue in the same pattern, but it was not. It was a century of war and bloodshed that resulted in the deaths of over 200 million human beings. When I was born the Second World War was about to break out in Europe and then in Japan. Even today there is war going on in the Middle East and other parts of the world. I could say that I seem to have been witnessing war throughout my life. Unfortunately, the 20th century was guided by a sense of ‘I win, you lose’. Therefore, it is today’s younger generation’s responsibility to make the 21st century an era of peace.”

His Holiness pointed out that it is a human trait to show affection and affection can help us reduce our anger. However, pointing to flowers on the stage he said,

“They are supposed to make us happy, but when someone is very angry, is their anger reduced by being surrounded by flowers? Since the presence of a trusted friend can help reduce your anger, it is evident that affection is very important. Animals can show affection. So can human beings. Flowers do not have such an ability.” 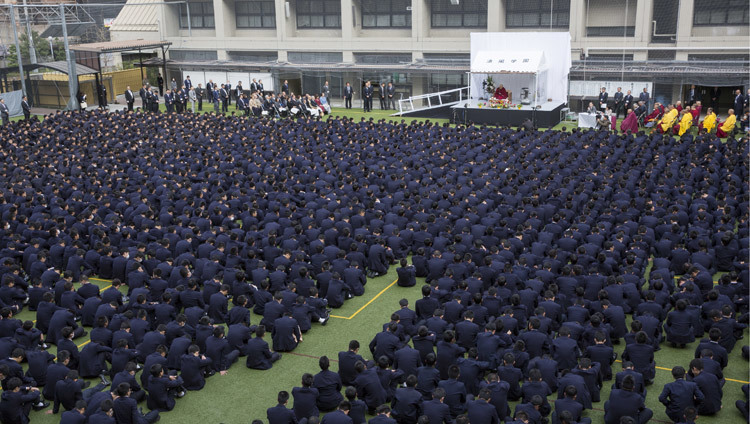 His Holiness reported that scientists have found that basic human nature is compassionate, which is a source of hope. If human nature was basically angry, there would be no hope. In connection with this, His Holiness said he felt there was something lacking in our modern education system, which focuses solely on material development with insufficient emphasis on inner development.

“My hope is that you will consider including the study of secular ethics in your school’s curriculum. We learn about physical hygiene to maintain physical health. We should also include emotional hygiene, not in a religious context, but in an academic one. In Buddhism, especially the Nalanda tradition that we all follow, the emphasis is very much on investigation and analysis. If we find that the Buddha’s own words do not stand up to reason, we have a right to reject what he said. Therefore, over the last 30 years, I have had serious discussions with modern scientists in the fields of cosmology, neurobiology, physics, especially quantum physics, and psychology.

“We should not look at Buddhist psychology only from a religious point of view, but from an academic one too. We should include it in our secular education. In Japan, traditionally a Buddhist country, I think it would be very beneficial to include Buddhist psychology in the academic curriculum. Buddhism relies on reason, investigation and experiment, which makes it similar to scientific research.” 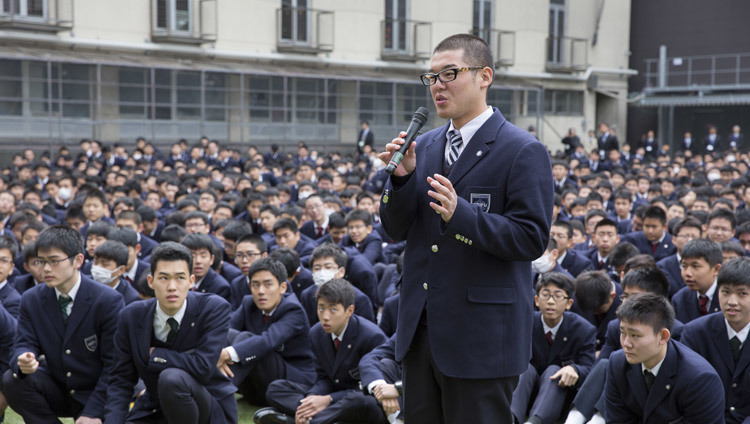 His Holiness answered several questions from the students. One asked about the most important qualities for a politician. His Holiness replied that politicians are also human beings, but that it is very important for them to be honest, truthful and transparent. He said that effective leadership is based on trust.

In answer to a question about nuclear weapons, His Holiness said that during the early part of the 20th century, people tended to rely on violence as a means of solving disputes. However, during the latter part of the 20th century many people began to look for alternative solutions. The desire for world peace has been steadily growing and His Holiness feels that Japan has a special role to play since it was twice the victim of nuclear attack. He suggested the Japanese people should lead the struggle to reduce and ultimately eliminate nuclear weapons.

She asked why he visited Japan so often and His Holiness told her, 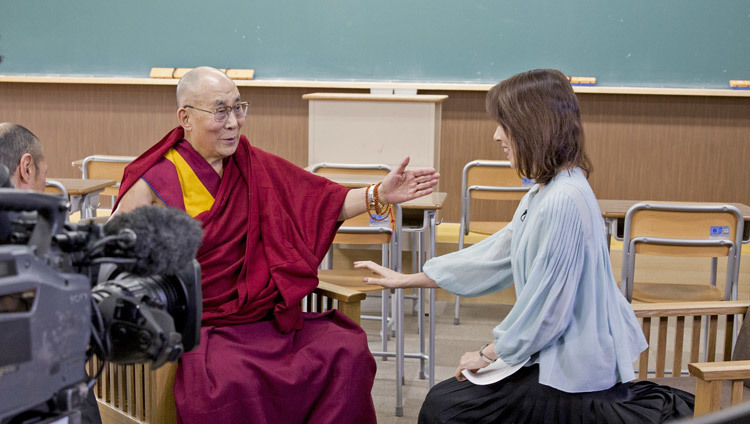 “Firstly, I’ve been invited and it would be foolish to refuse an invitation. But more important, I consider myself just one of the seven billion human beings in this world. I am convinced we all have a common responsibility to think of the welfare of humanity. So whenever I have the opportunity, I share my views about the oneness of humanity.”

To a question about the recent US Presidential election and whether he hoped to meet President Trump, His Holiness replied:

“I consider the US to be the leading nation of the free world, where the values of liberty and democracy are deeply rooted. The result of the recent election reflects the will of the American people. I don’t think things will be so different, but let’s wait and see. Of course I hope I may be able to meet President Trump in the future, just as I have met previous Presidents and leaders of the House and Senate in Washington.”

In a second interview, Morita Akira of TBS News asked His Holiness about the large number of Chinese Buddhists who attend his teachings. His Holiness replied: 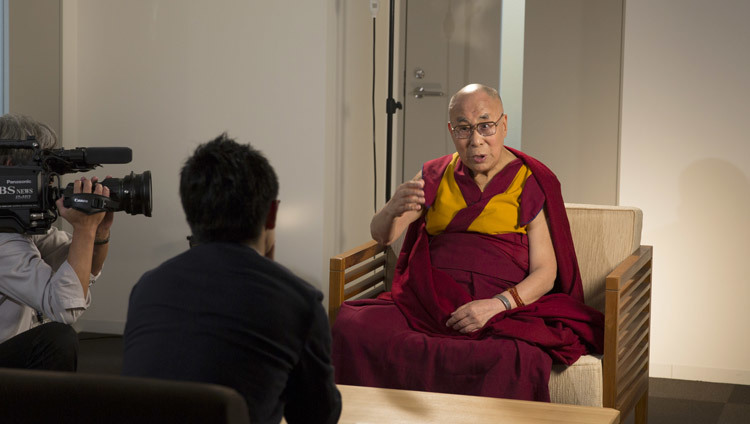 “China is historically a Buddhist country, a place where Buddhism is deeply rooted. During the Cultural Revolution systematic attempts were made to destroy religion. But when it was over Buddhism revived and has spread rapidly. Today there are close to 400 million Chinese Buddhists.

“The communists also tried to destroy Tibetan Buddhism. However, they failed to bring about a more peaceful and compassionate society. Today, China is a capitalist country lacking either a proper rule of law or a free press. Corruption is rife, which leads many people to search for some other source of inner values.

Tomorrow, His Holiness will begins his explanation of Shantideva’s ‘A Guide to the Bodhisattva’s Way of Life’.