Visit to the Czech Senate Followed by a Public Talk October 19, 2016

Prague, Czech Republic - It was raining this morning as His Holiness the Dalai Lama left his hotel and drove across Prague to the Senate Hall of the Czech Parliament. He was welcomed on arrival by Miluse Horska, Vice-Chair of the Senate, who escorted him into a meeting with 14 Senators and 34 Deputies. They all sat at a table together while His Holiness told them: 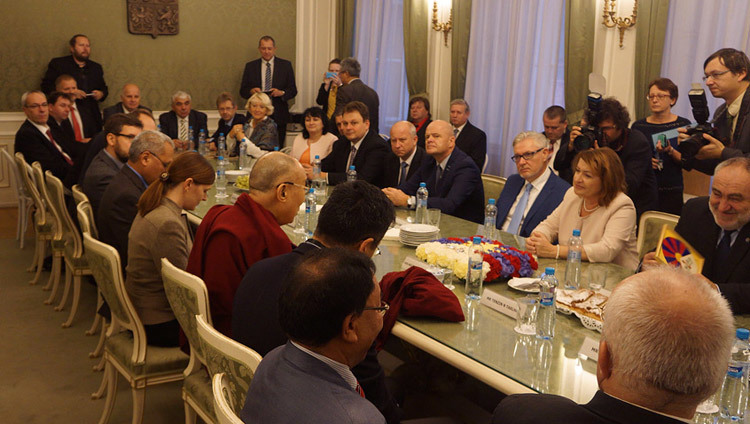 “It’s a great honour for me to be here with you, representatives of the people. Since my childhood I’ve had an interest in and a respect for democracy. While I was still in Tibet I tried to introduce reforms, but the Chinese put a stop to them because they wanted things done their way. After reaching India in 1959 I was able to introduce change. We set up a Parliament in Exile and in 1963 released a charter for Tibetans that declared that the Dalai Lama’s power could be abolished by a 2/3 majority of Deputies.

“In 2001, I semi-retired in favour of an elected leadership and in 2011, I fully retired myself and put an end to the Dalai Lamas’ political role.”

Mrs Horska asked what advice His Holiness might have for them as legislators and he replied that they needed to stand by their principles, but otherwise how they conducted themselves was for them to decide.

“After the collapse of communism, this country was among the first to institute democracy under President Havel’s leadership. What I always tell people is that we are all the same as human beings, physically, mentally and emotionally. We all have the potential to do damage, just as we all have the potential to do good. Irrespective of whether we have any religious faith or not, we are all human beings. Using our intelligence we can assess the extent to which anger, jealousy and self-centredness detract from our interests, while compassion and concern for others serve them. This is something I always talk about when I meet with other people and I’m not talking as a Buddhist or as the Dalai Lama, I’m talking about our common experience as human beings.

His Holiness the Dalai Lama meeting with Czech parliamentarians at the Senate Hall of the Czech Parliament in Prague, Czech Republic on October 19, 2016. Photo/Ondrej Besperat

“If you stand by your principles, you’ll naturally be honest and truthful, qualities that are important in elected politicians.”

His Holiness mentioned that when he first came to newly liberated Czechoslovakia he suggested that it could be useful to come up with a combined approach to the economy that preserved socialist concerns for the poor while harnessing the dynamic qualities of capitalism. He reported that when he recently met a group of Russian intellectuals they told him how restricted and controlled things are for them these days. His Holiness suggested that Czechs take whatever opportunity presents itself, whether it involves visiting Russian tourists or students, to show them the value of freedom and democracy.

“A few days ago I met the President of Slovakia, Andrej Kiska,” His Holiness told the Czech politicians, “who struck me as a true follower of President Havel. I was impressed.”

His Holiness declared himself similarly impressed by delegates from Egypt, Saudi Arabia and Israel he met yesterday, only regretting the shortage of time to talk to them. In connection with Forum 2000, he reported his suggestion that groups of students, particularly from areas of conflict, be invited to attend workshops in connection with the wider discussions. He described a group of such students that the United States Institute of Peace had brought to see him in Dharamsala.

As the meeting, which had run well over time, came to an end, participants clustered around His Holiness to exchange a few personal words, shake his hand, request his signature, or simply take a photograph with him. 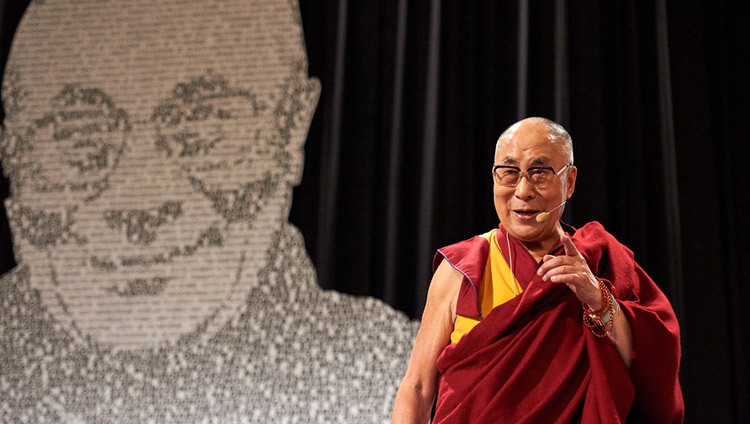 After lunch, His Holiness drove to Lucerna Palace where a capacity crowd of 2800 awaited him.

“Dear brothers and sisters,” he began, “this is how I always start. Under the leadership of the late President Havel, your country stood by its principles. The other day too in Hradcanske Square I witnessed your ongoing support for Tibet, which is a just cause and your support for our non-violent approach. On behalf of the Tibetan people and all who love non-violence, I’d like to offer you heartfelt thanks.

“The other day too, I briefly mentioned my three commitments. I am committed to promoting human happiness, the most important contributing factor to which is peace of mind. And the best way to achieve that is to cultivate compassion. All the major religious traditions advocate love and compassion. Meanwhile, scientists have revealed evidence that basic human nature is compassionate—so there is real hope.

“My second commitment is to fostering inter-religious harmony and the third is to do with Tibet. As far as political responsibility goes, I’ve totally retired, but I remain deeply concerned about keeping Tibetan language and culture alive and protecting Tibet’s fragile natural environment.

“I don’t want just to repeat what I told you the other day, so this time I’d like to answer your questions. Please, ask me whatever you like.” 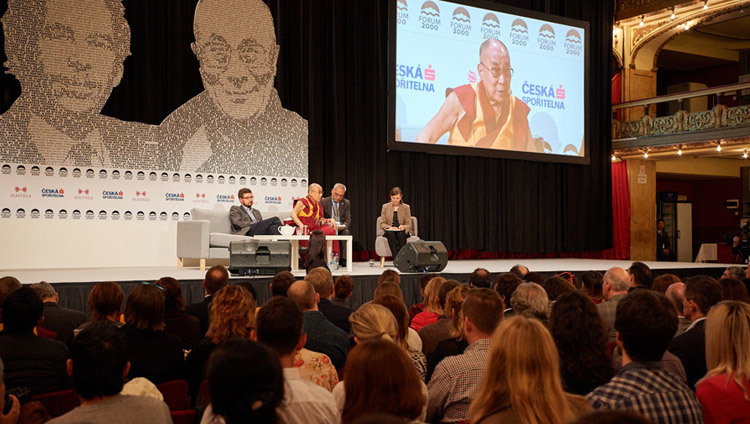 The first questioner wanted to know not only how to develop compassion, but how encourage angry people to do so. His Holiness pointed out that even those who seem angry now weren’t like that when they were born. Even they share in the basic human nature of compassion that scientists are talking about. He pointed out that too much nationalism, self-centredness and focus on people in terms of ‘us’ and ‘them’ runs counter to compassion. He described existing education systems as inadequate, because they focus on materialistic goals while paying little attention to universal inner values. He said that what he calls secular ethics remain of great relevance in the interdependent world we live in today. These values can be approached on the basis of scientific findings, common experience and common sense.

Talking more about the basic positive nature of human beings, His Holiness pointed out that children don’t care about differences of nationality, race or faith, they accept each other as they are and play. He also asked his listeners to imagine they were lost alone on an empty island or crossing a desert and suddenly saw someone in the distance. The natural response would be to be filled with joy at meeting another human being with no care about where they came from or what they believed. The example shows how deeply we cherish a sense of the oneness of humanity.

Several questioners expressed their unease at the direction of developments in the Czech Republic and even in the USA. His Holiness repeated that it’s easy to complain if you don’t look at things from a wider perspective. 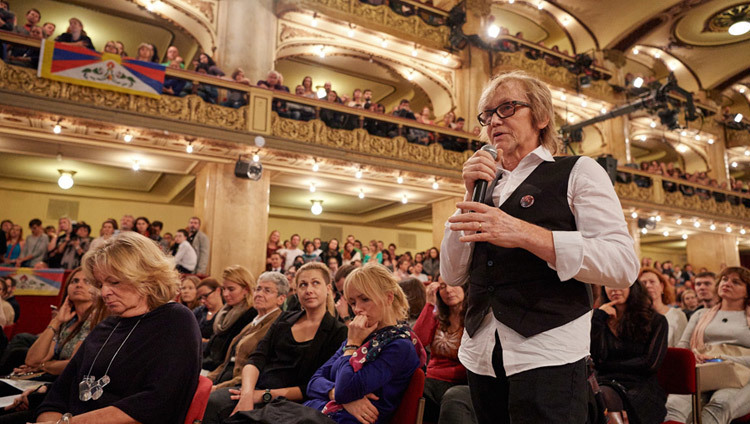 “Compared to life in Iraq or Syria just now,” he said, “things are still pretty good where we are. If, instead of worrying about the wider world, we learn to tackle our destructive emotions we’ll develop an inner strength that will ensure the sense of hope and optimism that are crucial for success. Friendship is important and we make friends not by accumulating power and money, but by showing compassion and concern for others.

“I’m happy to come here and although I naturally miss President Havel, I’m glad to see his friends carrying his wisdom forward and working to fulfil his vision. Of course, it’s routine that wherever I go the Chinese Embassy is busy, but at least they give me publicity. If you were able to speak privately to those who criticize me in public, they might express a different view. Under a totalitarian system there is no freedom of speech or expression, but you Czech people know all about that.”

When someone asked about how it’s possible to have a good motivation, to feel compassion, without getting anything done, His Holiness talked about an occasion in Japan. He was attending a meeting of Nobel Peace Laureates in Hiroshima at which his colleagues, one by one, repeated, ‘Let’s pray for peace’. When it came to his turn he said, “It’s all very well to pray for peace, but peace will only come if we take some action. We must be practical, realistic and determined.”

Asked quietly, “Are you planning to reincarnate again?” His Holiness answered by repeating his favourite prayer:

For as long as space endures
And for as long as living beings remain,
Until then may I too abide
To dispel the misery of the world.

And when someone else asked him what he believed in he replied:

“That basic human nature is positive and compassionate and that we can, if we try, work together to build a happier more peaceful world.”

In connection with a request that he come again in the future, His Holiness declared that he feels a responsibility to do so, because of his close friendship with President Havel. He said,

“Certainly I’ll come, but you’ll have to send me an invitation. Tomorrow, I’ll be going to Italy, while you remain here. Look at your problems from a wider perspective and tackle them with self-confidence. As the Buddha said, ‘You are your own master’. Success depends on your being confident and optimistic. Goodbye.”

The hall erupted in cheers and applause that were loud and long.