Saitama, Japan – His Holiness the Dalai Lama left Kanazawa for Omiya this morning by bullet train after spending two relaxing days at the home of an old Japanese friend.

From Omiya, he drove through the countryside directly to the Saitama Medical University. On arrival he went immediately to offer his condolences to the family of Maruki Kiyohiro, Chairman of the University, who recently passed away.

Maruki Kiyohiro's father, Maruki Kiyomi, was the founder of the Saitama Medical University & Hospital, who invited the first five Tibetans to study in Japan in 1965. Subsequently, a total of 21 Tibetans came to Japan under the scholarship program he set up. 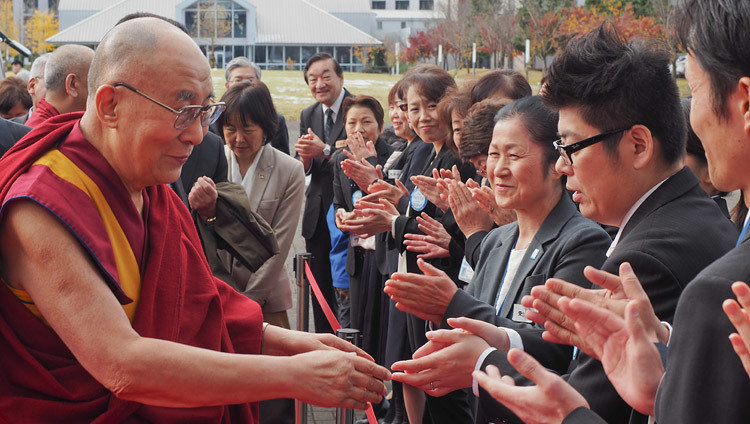 After lunch with the senior officials of the University and hospital His Holiness drove to the new campus where he was warmly received by members of the university, some of the original Tibetan students and their families among them. On the stage, he was formally welcomed by Maruki Kiyoyuki, the grandson of the founder, who reminded him that this was his third visit to Saitama and that 49 years had passed since his family had first come into contact with the Tibetan people. He thanked His Holiness for taking the time to come and talk to them.

Beginning by paying tribute to the three generations of the Maruki family who have befriended him, His Holiness said,

"Where there is birth there is always death. Time constantly moves on, which is why things change. We know that everyone who is born has to die, but the important thing is that while we are alive we should make our lives meaningful.

"The senior Maruki-san and his son who has just passed away both gave great service to others, especially the Tibetan people. Soon after we came into exile, very few knew what had happened in Tibet. At that time Maruki-san senior showed great kindness to Tibetans, which we will always remember with gratitude.

"Maruki Kiyoyuki here represents the third generation of this family who have shown concern for the Tibetan people. I would like to thank you for your promise to continue to support us as your father and grandfather did before you."

Highlighting the importance of compassion, he continued, 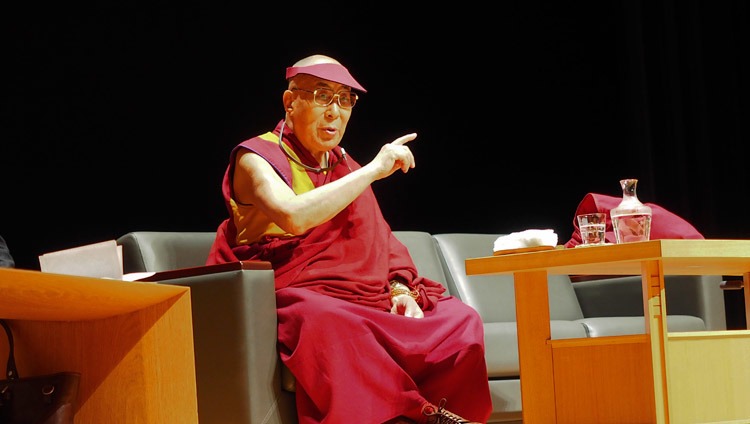 "Despite the great variety of languages on this planet, all 7 billion people speak about the importance of compassion. It's something everyone appreciates, even animals. When we meet someone who is truly compassionate we feel happy and want to be friends with them, but when we meet people who are angry we want to get away from them.

"Over the last 30 years I have held discussions with scientists and one thing they have recently revealed is evidence that our basic human nature is compassionate.

Young children are naturally compassionate and kind to each other. But gradually as they grow up they focus on secondary differences such as colour, nationality, economic and educational background. I feel this happens because our education system over-emphasises material development while paying insufficient attention to human values."

His Holiness mentioned the positive results being seen in two cities in the U.S. that have declared themselves cities of kindness. He also referred to an ongoing project to develop an educational curriculum intended to inculcate and reinforce human values in the students who follow it.

Addressing the medical students in particular, His Holiness said that when it comes to treating the sick, showing them kindness is as important as their medical training. Citing his own experience, he said that when he has to seek treatment, if the doctors or nurses are kind he feels at ease, but if, as sometimes happens, he is given an injection in a mechanical way, with no concern for him as a human being, he feels apprehensive. 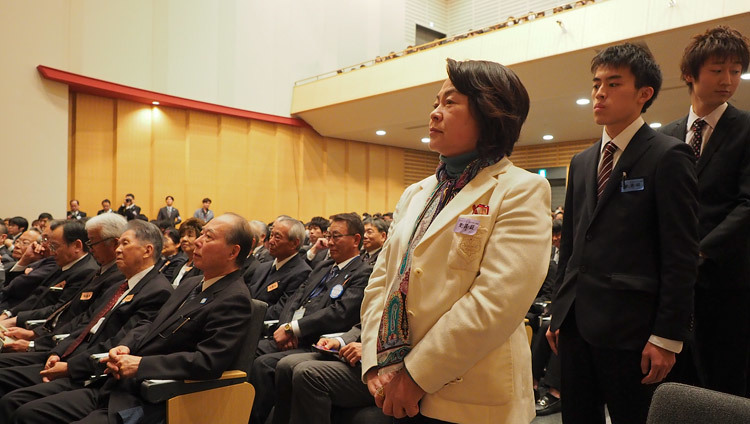 "You Japanese should smile more," he teased. "As human beings we need to show each other simple human warmth."

Among questions from the audience a student asked how to deal with feelings of dejection and the stress of competition. His Holiness told him,

"You need to boost your own self-confidence. Competition can give us the stimulus to succeed."

A doctor told His Holiness that his problem was that he often felt unable to decide whether it would be better to do this or that. His Holiness advised him to rely on people he trusted and to discuss such questions with them. He recommended maintaining a positive outlook. He similarly advised a psychiatrist, to encourage his patients to remain optimistic. To do that it's important to view things from a wider perspective. He said that when you focus solely on the problem that confronts you it can be overwhelming. Taking a wider perspective often reveals solutions.

A long drive from Saitama brought His Holiness to Narita, near the international airport, where he will spend the night before flying back to India tomorrow. He will arrive in Dharamsala on 28th November.