Why We Need Dialogue and Solidarity in the Global Crisis October 13, 2016

Zurich, Switzerland - Smoke wafted from the chimneys under an overcast sky as His Holiness the Dalai Lama began his first engagement of the day in Bern this morning, giving an interview to Amira Hafner-Al Jabaji for the Swiss National TV programme Sternstunde Philosophie. A Muslim woman with a commitment to dialogue between religions, she began by asking how to reach out to those not ready for dialogue. His Holiness told her: 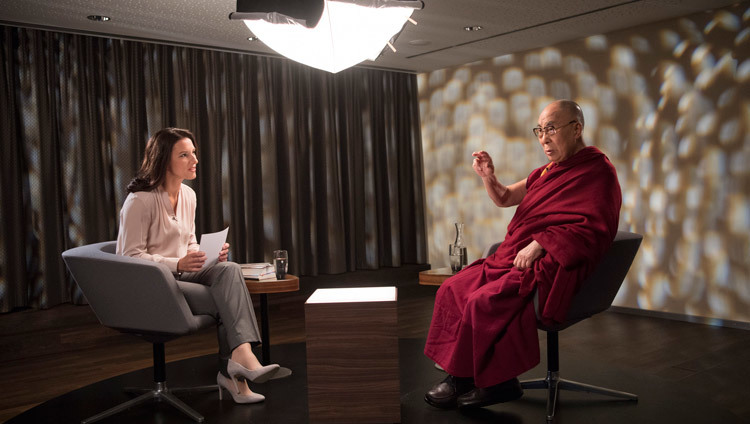 “We are human beings, we all have the ability to take a longer term, more holistic view. We have this marvellous intelligence. If we look at a problem close to it often seems very grave, but if we can see it from a wider perspective it may not look so serious.”

Acknowledging that the major religious traditions take different philosophical points of view, he said that nevertheless these different approaches have a common purpose of encouraging the common practice of love, tolerance and self-discipline. Asked why he thought Buddhism was so attractive to Europeans, His Holiness said that its use of reason gave it an appeal to those who are more scientific minded.

As to Buddhist-Muslim relations, His Holiness mentioned the close connections he has witnessed between the two communities in Ladakh in North India. He recently made a point of visiting a Buddhist temple, a Sunni Mosque and a Shia Mosque there on the same day to encourage this cordiality. Regarding the situation of the Rohingya Muslims in Burma he said he was in Washington DC when he first heard of the troubles they face. He appealed to the Buddhists, when distressed by anger, to remember the face of the Buddha, convinced that if he were there he would offer the Muslims protection. His Holiness confirmed that he has discussed the crisis with Aung San Suu Kyi and encouraged her to intervene.

Ms Hafner-Al Jabaji asked how His Holiness imagines the world in 50 years. He replied: 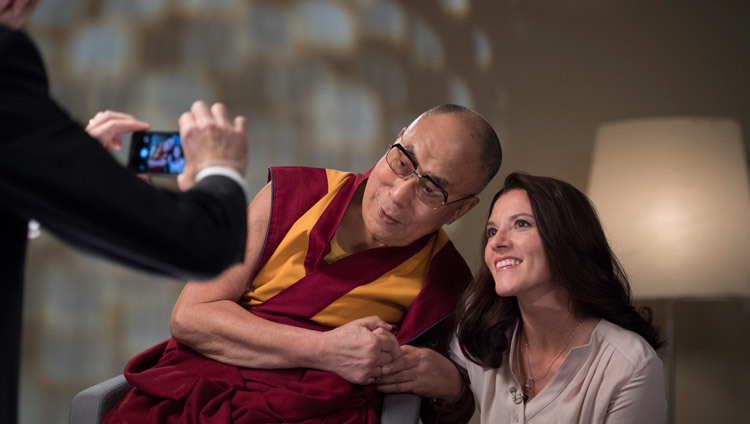 “In the early 20th century when nations went to war, citizens unquestioningly joined up in support. Later in the century that attitude seems to have changed. Adenauer and de Gaulle’s efforts to form what has become the European Union put an end to hostility between Germany and France. Millions across the world marched to oppose war in Iraq.

“In 1996 I asked the Queen Mother of England, who had observed almost the entire 20th century in her life, whether she felt things had improved, stayed the same or got worse. She unhesitatingly said they had got better, remarking that in her youth there was no talk as there is now of human rights and self-determination.

“Elsewhere totalitarian regimes have been brought down by their own people. In China, where religion came under attack during the Cultural Revolution, 400 million Buddhists and about 200 million Christians have recently emerged.

“Certainly there are grounds to be optimistic. Scientists’ findings that basic human nature is positive and compassionate is a source of hope. More and more people are coming to understand that peace of mind is good for the well-being of individuals and the community at large. “

In the Kursaal Arena, President of the House of Religions, Giorgio Albisetti introduced His Holiness to an audience of 1400 and asked him to speak to them about dialogue and solidarity. Stepping up to the podium, His Holiness began, 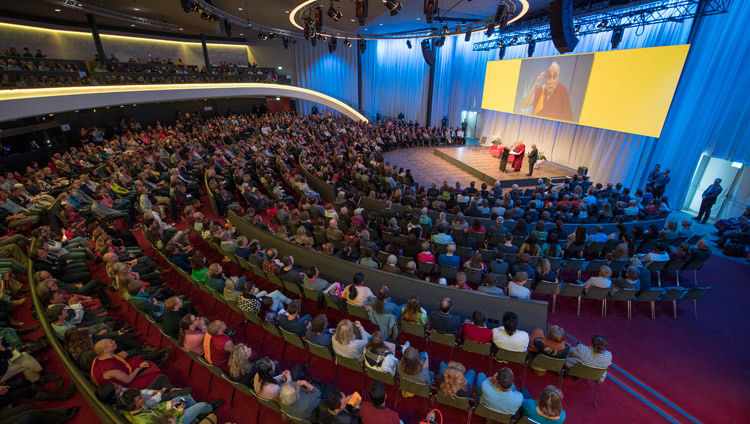 “Senior, respected brothers and sisters and my other brothers and sisters, as social animals all 7 billion human beings need friends—so why do we fight and kill each other? It’s because we tend to focus too much on secondary differences between us, differences of nationality, race, faith, poverty and wealth, whether we are educated or not. We tend to see each other in terms of ‘us’ and ‘them’, which is a basis for conflict. On top of that we short-sightedly only look to temporary goals.

“The only remedy is to look at things on the deeper, more fundamental level of our being physically, mentally and emotionally the same. We need to see ourselves as equally human beings. Once we see ourselves as human brothers and sisters there’ll be no basis for harming or killing each other. So we need to develop a sense of the oneness of humanity.

“I want to share with you my commitment to promoting human happiness. We tend to think that happiness comes from money and power without seeing the role of the mind and that the key is inner peace. When we’re mentally distressed physical comfort brings little relief, whereas we can often withstand physical pain if we are mentally at peace. Modern life-style is focussed on material goals which are not sufficient in and of themselves to bring about inner peace. So my first commitment is to educating people to the prospect that warm-heartedness brings inner peace and that a healthy mind supports sound physical health. We all want to live a happy life and to do so is our right, but instead of fulfilling material goals what we need is to cultivate inner values.” 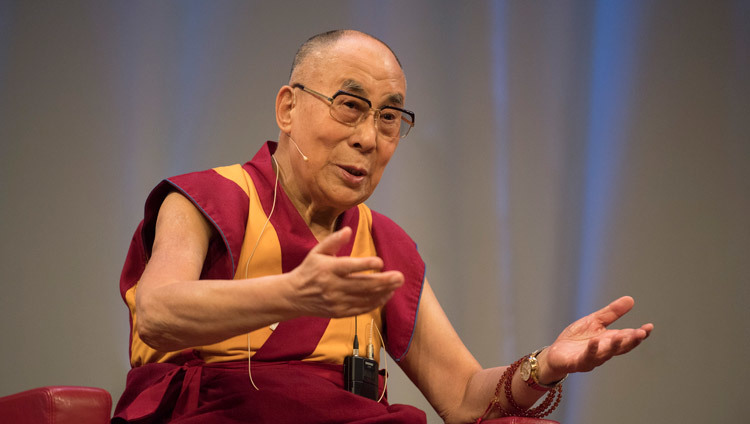 His Holiness declared his second commitment to be the fostering of harmony among religions and repeated his appreciation of the active contribution the House of Religions can make to this.

“Whenever we face conflicts of interest,” he observed, “we have to think on a global level. We are interdependent. We need each other. In the globalised world in which we now live clinging to notions of ‘my nation, my faith, my community’ is out of date. We need instead to be much more aware of the oneness of humanity and on that basis meaningful dialogue can come about. We have acknowledge others’ rights and interests.

“I often say that since the last century was an era of such great violence we have to take the welfare of others into account and make this a century of dialogue. Such an emphasis on dialogue requires a sense of solidarity with all human beings.

“If you feel anything I’ve said is useful, please think more about it. Discuss it with your friends. That’s the way ideas spread. It’s not a matter of praying to Jesus, the Buddha or Allah to solve our problems for us.”

The audience responded with approving applause. In the ensuing discussion with Juri Steiner, His Holiness explained that engaging in dialogue is difficult because we tend to be short-sighted and stuck in old ways of thinking. Once again he expressed his appreciation of the way the EU is motivated by placing the interests of the broader community before those of individual members for the general good. He mentioned the natural openness and honesty of children and the need to discover how to preserve it as they grow up. 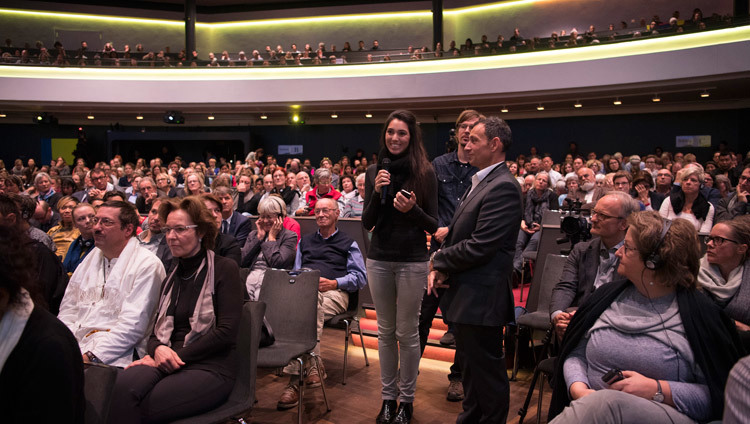 Answering questions from the audience he affirmed that a decision about whether there will be a 15th Dalai Lama rests in the hands of the Tibetan people. He said the question of how that person will be selected has not yet been determined, but agreed that it’s perfectly possible for it to be a woman. He clarified his belief that there are universal values, human values, to be found in all the major religious traditions, but that we don’t necessarily need to be religious to find them.

Questioned about aliens His Holiness remarked that although we may pray for the welfare of all sentient beings, including those in other parts of the universe, the beings we can actually engage with and relate to are the other beings with whom we share this planet.

In relation to the practice of patience, His Holiness made clear that we don’t exercise it when are relaxed and at ease, but when we’re about to give in to anger.

Thanking him once again for coming, Mayor Alexander Tschappat escorted His Holiness from the stage. Outside, the way from the hotel to the car was thronged with Tibetans eager to glimpse and interact with him. He smiled, waved and clasped hands with them until he reached the car. From Bern he drove to Zurich, where tomorrow he will give Buddhist teachings in the morning and afternoon.