Bodhgaya, Bihar, India - It was cold and misty this morning, when, just before 7 o’clock, His Holiness the Dalai Lama drove out of Namgyal Monastery. Sikyong Dr Lobsang Sangay, Parliamentary Speaker Khenpo Sonam Temphel and Religious & Cultural Affairs Kalon Ven Karma Gelek walked, ceremonial incense in hand, before his car to the nearby Kalachakra ground. His Holiness greeted those gathered in the Kalachakra Temple and sat down facing the mandala pavilion to begin the preliminary procedures for the Kalachakra Empowerment. He was assisted by monks of Namgyal Monastery. 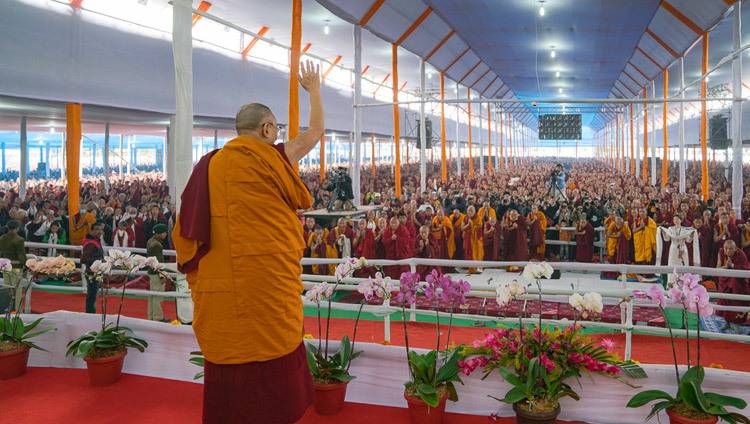 “Today, I’ve finished the preliminary ritual in about an hour or so,” His Holiness remarked once he had taken his seat on the throne facing the crowd. Verses of homage to the Buddha and the ‘Heart Sutra’ were recited and His Holiness asked everyone to repeat the Kalachakra mantra while he prepared for the next stage in the proceedings.

“Here we are in this sacred place where more than 2500 years ago Buddha Shakyamuni attained enlightenment. Great Indian masters like Nagarjuna and many among the 84 Great Adepts have also practised here. Many translators who came from Tibet in search of teachings also visited the site. On this occasion, I’m going to give the Kalachakra Empowerment here and it will be the 34th time I’ve done so.

“Since the time of the 7th Dalai Lama, who composed the text we follow on the basis of the Zhalu and Jonang Traditions, the monks of Phende Lekshe Ling or Namgyal Monastery have practised Kalachakra.

“After I gave the empowerment for the first time in India, at Dharamsala in 1970, we had already dismantled the mandala at the end when I had a dream. I dreamt that I was in the centre of the mandala with the monks around me. We were blessing the ground and intoning the invocation of the deity. I took this to indicate that I would give the empowerment over and over again. Since I first gave it in Lhasa in 1954 many people have received it from me, but I don’t know how many are actually doing the practice.”

His Holiness paused to enquire if what he was saying was being translated and broadcast clearly on FM. He was assured it was and that there were simultaneous translations into Hindi, English, Chinese, Russian, Korean, Mongolian, Japanese, Italian, Vietnamese, French, Spanish, Portuguese, Thai, Nepalese, Ladakhi, Bhutanese, as well as Amdo and Khampa dialects. 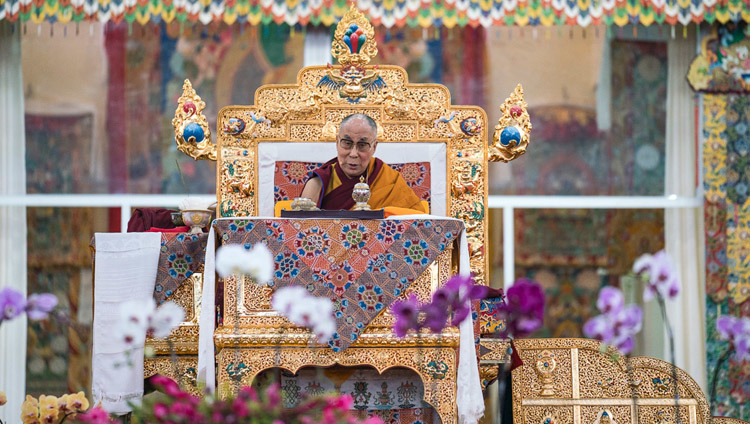 “You have all come here with great enthusiasm to listen to the Dharma. Let’s turn it into an opportunity to do practice. Whatever religious tradition you follow, what’s really important is to be sincere about it. The main practice of all our various traditions is the cultivation of altruism—a sense of love and compassion. That’s a practical approach. Those of us who follow the Sanskrit Buddhist tradition need to cultivate compassion if we are to qualify as Mahayana practitioners. If we are just selfish at heart, our practice will not be Mahayana. And if you don’t do the practice there won’t be much blessing from the empowerment either.

“What we need to do is to change our outlook and focus on the welfare of others. Since you’ve gone to the effort and expense of coming here, while you’re here try to make some inner transformation. This is also where I received the reading transmission of the ‘Guide to the Bodhisattva’s Way of Life’ from Khunu Lama Rinpoche, which had a great impact on me as a result of which I have made some transformation in myself. You can’t do this through prayer alone, you have to use your mind and transform it. The way we progress through the five paths is indicated by the ‘Heart Sutra’ dharani - Gate, gate, paragate, parasamgate, bodhi svaha.”

His Holiness advised that inner transformation is not something that occurs in a couple of days. He said that just as it takes time for a flower to grow and bloom, it will take time to transform our minds. But, as Maitreya said, the nature of the mind is clear and its defilements are adventitious. Keeping the goal enlightenment in focus is an incentive to avoid unethical behaviour, adopt virtue and transform the mind.

“To practise altruism is the way to lead a good life,” His Holiness suggested, “and if you do that you’ll have a good rebirth. Try to understand the teachings by listening to them, thinking about them and integrating them into your life. 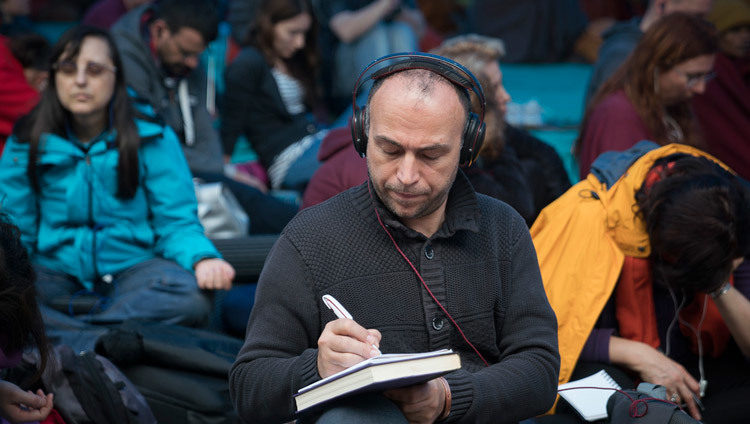 “I’ll also be teaching the middle volume of Kamalashila’s ‘Stages of Meditation’, which he wrote in Tibet in the 8th century at the request of the Tibetan Emperor Trisong Detsen. It was his teacher Shantarakshita who introduced the Nalanda Tradition to Tibet, establishing monastic ordination, giving teachings and instigating the translation of Buddhist literature into Tibetan, while Guru Padmasambhava pioneered the practice of tantra.

“Today, I’m going to go through the procedures for taking care of the disciples. It will take several days to construct the sand-mandala, so today’s procedures are intended to protect disciples from encountering obstacles to receiving the empowerment. This includes making ritual cake offerings to potential interfering forces and setting up a vajra fence to protect the location.”

His Holiness spoke about the scientific view that the universe began with a big bang and the Buddhist view that mind has no beginning. He said that the substantial cause of mind has to be of the same nature—that is mind. He observed that until now, since we have not seen the faults of negative emotions, we have applied no antidotes to them. Since the main source of negative emotions is ignorance, the wisdom understanding emptiness is the most effective antidote. For this reason, His Holiness commended the practice of the three trainings in ethics, concentration and wisdom.

On behalf of the hosts of the Kalachakra ceremony, the Central Tibetan Administration, Sikyong Dr Lobsang Sangay offered a mandala and representations of the body, speech and mind of enlightenment to His Holiness. In due course he was invited to throw the tooth stick on behalf of the laypeople in the audience to discover what kind of feats they will achieve. Khenpo Sonam Temphel did that same on behalf of monastics.

His Holiness recommended that disciples rely on the concise or the full Kalachakra mantras for protection, reciting them even when shopping. He announced that this completed procedures for protecting the disciples and that as he will not begin to teach for the next two days there is time to go on pilgrimage to Rajgir, Nalanda and the Mahakala caves. His Holiness’s final advice was for everyone to take care of their health.