Tawang, Arunachal Pradesh, India - His Holiness the Dalai Lama reached Yiga Choezin earlier today in order to do the preparatory rituals required for him to give an Avalokiteshvara Empowerment. 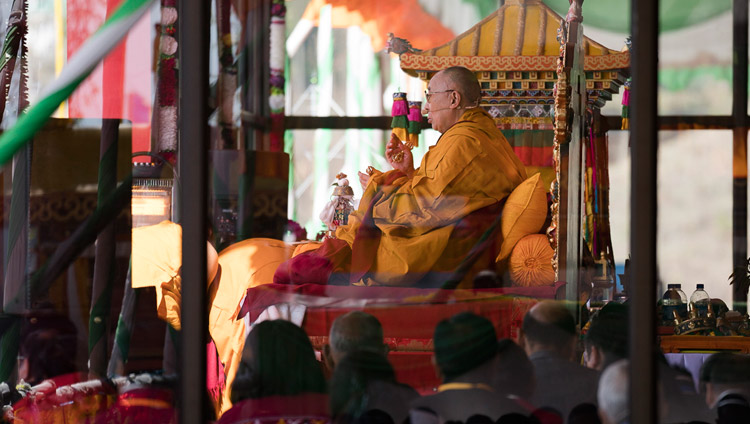 At the request of local MLA Jambey Tashi he signed placards concerning projects in other places. One related to the Dolma Lhakhang that has been built at Lumla, another depicted a statue of Guru Padmasambhava at Lunpo Zemithang near the Tibetan border. He also unveiled a foundation stone for a statue of Maitreya to be constructed near the border with Bhutan.

“The Buddha was someone who taught about dependent arising from his own experience,’ His Holiness explained when he was ready. “It’s important not only to try to be good people, but also good followers of the Buddha. What is unique about his teaching, his explanation of dependent arising free of extremes, is highlighted in the opening verses of Nagarjuna’s ‘Fundamental Wisdom of the Middle Way’.

I prostrate to the Perfect Buddha,
The best of teachers, who taught that
Whatever is dependently arisen is
Unceasing, unborn,
Unannihilated, not permanent,
Not coming, not going,
Without distinction, without identity,
And peaceful - free from fabrications.

“Things exist in conventional terms but are dependent on other factors, causes and conditions.

“We say I take refuge in the Buddha, Dharma and Sangha, but what does this mean. The Buddha is not just someone who appeared at a moment in history 2600 years ago. What is extraordinary about him is the Dharma Jewel within him. This refers to his achievement of the true path and true cessation it gives rise to. 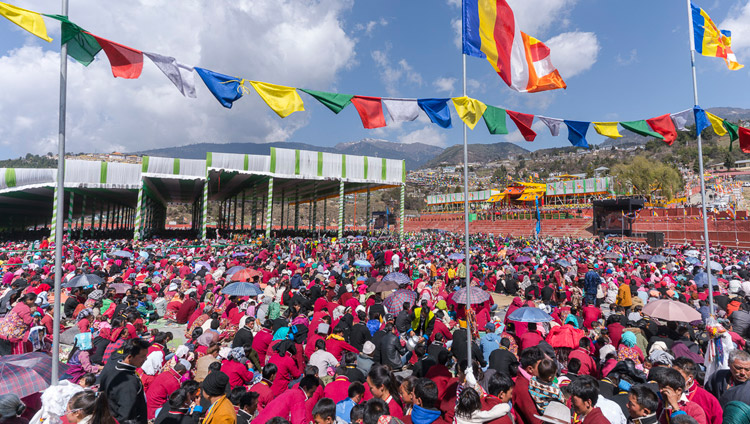 “What he has seen as free from the eight extremes of arising and ceasing, being non-existent and being permanent, coming and going, being multiple and being singular, he has seen as a result of his own effort. He has achieved cessation by overcoming the defilements of his own mind through realizing the suchness of how things are. This corresponds to the quantum physics observation that nothing has objective existence. His achievement of true cessation and the true path qualifies him as a Sangha Jewel.

“The Buddha is the teacher; the Dharma is the actual refuge and the Sangha are those who assist on the path. The Buddha is called a teacher not a refuge because he shows the path through teaching. He teaches the truth that leads us to liberation. He is not someone who washes away unwholesomeness, or removes sufferings with his hand, or who transfers his realization to others. We too should practise the teaching in order to attain the path and cessation. To understand what the Dharma jewel is we need to understand what emptiness is and we can do this by understanding dependent arising.”

Before starting the ritual procedures for the empowerment, His Holiness gave a reading transmission of a Guru Yoga he composed in the 60s called the ‘Inseparability of the Spiritual Master from Avalokiteshvara’. When it came to the name mantra he remarked that one of his names, Jampel or Manjushri, was given to him at his first ordination by Reting Rinpoche and was later dropped. In due course he chose to restore it.

His Holiness distinguished the perfection vehicle from the resultant vehicle of tantra; the sutra system and the tantric system. Of the four classes of tantra, he said the empowerment of the 1000 Armed 1000 Eyed Avalokiteshvara belongs to kriya tantra and the lotus lineage. It came from the transmission of Bhikshuni Lakshmi in India. He said he received it first from Tagdag Rinpoche and again later from his Senior Tutor Ling Rinpoche. He also affirmed that he has completed the required retreat. 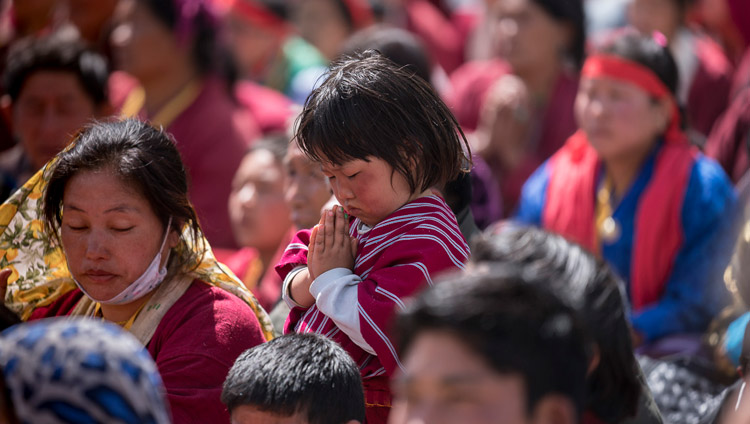 Before continuing with the empowerment, His Holiness said he would read the ‘37 Practices of Bodhisattvas’ without stopping to explain much because of a shortage of time.

“The author Thogme Sangpo of Ngulchu was a contemporary of Buton Rinpoche, a great scholar and renowned as a bodhisattva. His realization of bodhichitta was such that birds and wild animals, a fox among them, gathered around him. He composed this work to encourage his disciples to practise too. I received it from Khunu Lama Rinpoche.

“Practice of the Dharma is about transforming the mind such that it becomes the mind of a Buddha. We have a pristine awareness, a primordially pure mind, that is our Buddha nature. Drawbacks occur because we have not been able to tame our minds. Suffering arises fundamentally from ignorance. Not just not knowing, but a distorted view that is the opposite of reality as it is. As we appreciate reality, ignorance diminishes. It’s like seeing something in the distance that looks like a human being. The closer we get the more obvious it is that it’s a scarecrow or cairn.”

The text speaks of cherishing your spiritual teachers which His Holiness observed means appreciating their qualities. He remarked that he’d heard that in parts of Kham the greatness of a Lama is measured by the number of horses in his caravan, which he said is just ignorant. He was reminded of the story of someone visiting an Abbot in Kham, finding him away and being told that he’d gone to the village to scare the old people. His Holiness said that since Buddhism is to do with liberation and omniscience it is not to be used to scare people. It should be about generating confidence and inspiration that we have the opportunity of a human life to practise. 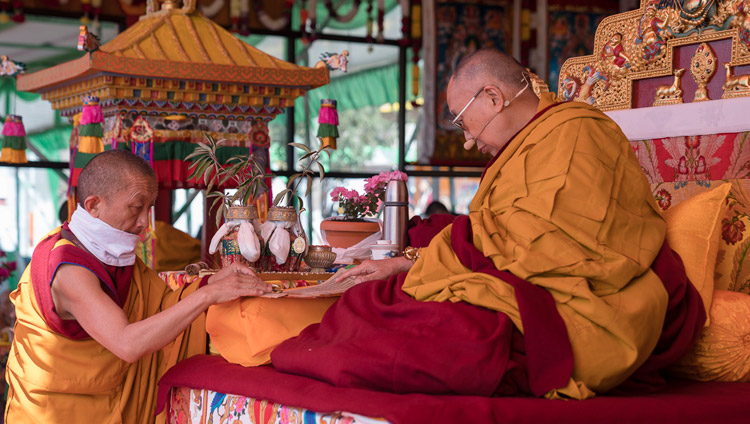 Responding to the line ‘What worldly god can give you protection?’ His Holiness spoke about the worship of Shugden. He said that from 1951 he too had done it, but stopped after having strange experiences. He mentioned that he discovered that historically the 5th Dalai Lama had tried to appease the spirit and had resorted to wrathful means to subdue it. He’d written about how Tulku Drakpa Gyaltsen was not the actual reincarnation of Tulku Gelek Palsang, the successor to Panchen Sonam Drakpa. He had also described Gyalpo Shugden as a spirit arisen through wrong prayers who harmed the Dharma and sentient beings. His Holiness talked about how all this emerged from investigating trouble that took place in Ganden Jangtse, how he stopped the practice and investigated whether to encourage others to stop it too.

His Holiness suggested that regarding the protector chapel on the side as more important than the statue of the Buddha in the front as indicating mistaken priorities. In his brisk continued reading of the text, he pointed out where the verses outline the practice of the six perfections.

After giving the upasaka and upasaki precepts of lay practitioners in the course of the empowerment, he remarked that the fourfold Sangha was complete. He noted that although Bhikshuni ordination had not been established in the Tibetan tradition, now there were Geshemas as well as Getsulmas.

From the Yiga Choezin teaching ground His Holiness drove to Ugyen Ling where the birthplace of Gyalwa Tsangyang Gyatso, the 6th Dalai Lama, is preserved. After participating in a brief tsog offering, he had lunch with invited guests in the temple upstairs. After lunch he drove on, stopping on the way to greet children and staff of the Manjushri School, to the Dorje Khandu Memorial Museum. 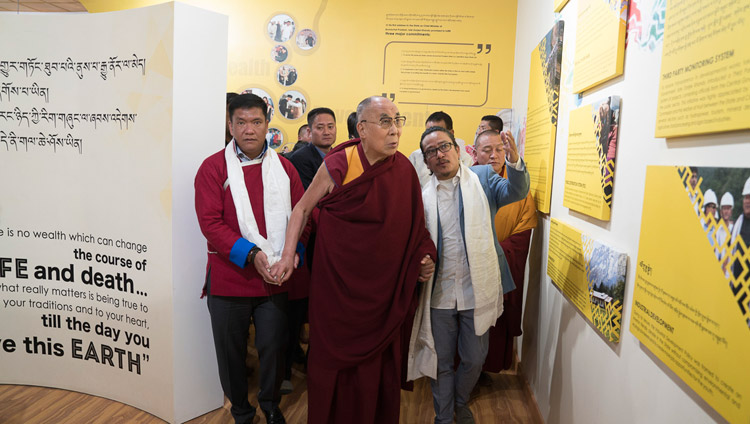 He was invited to inaugurate the Museum and Jangchub Chorten established in tribute to the present Chief Minister’s late father, who had also been Chief Minister and someone His Holiness counted as a friend. He unveiled the plaque recording the consecration, inaugurated the innovative and well-appointed Museum and took a brief tour inside. His Holiness showed a keen interest in the materials related to Dorje Khandu’s life, and also in the account of his own escape from Tibet and arrival in Tawang in 1959. He recorded his own testimonial to his late friend and willingly complied with a request to leave his handprints on a picture on the wall. He planted a tree in the garden outside.

Back at Tawang Monastery once more, the monks had assembled in the temple. The new Abbot modestly requested His Holiness to give some words of advice to the monks. He said that he was trying to do his best to fulfil what he understood to be His Holiness’s wishes and build on what his predecessors had done to improve education. He reported that there are currently nearly 400 monks resident and more than 100 studying elsewhere.

His Holiness reminded them that the Tibetan Buddhist tradition had been established by Abbot Shantarakshita, but that in Tibet people were no longer free to study and practice as they chose. He recalled that when he took his Geshe exams there were 10,000 monks at Drepung Monastery and several thousand at Sera. He said he’s been told that these days in Drepung there are barely 40 monks. He stressed how valuable it is that throughout the Himalayan region there is a freedom to study and practice and he urged the monks to take advantage of it. 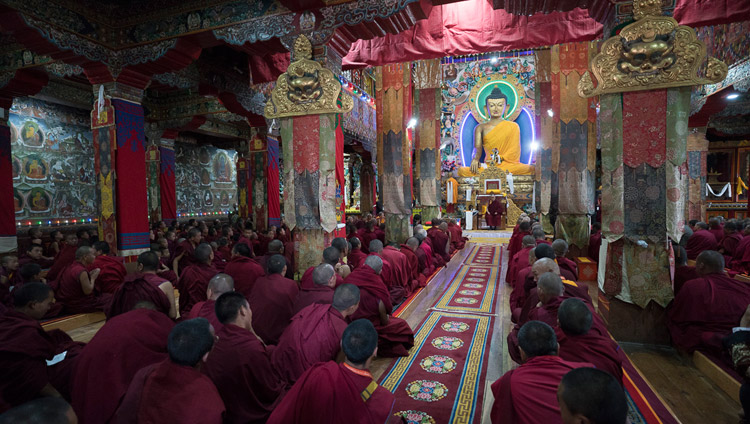 He asked about the monastery routine and hearing that the day starts at 4 or 5 o’clock with prayers suggested that the younger monks need more time to sleep. He dwelt on the importance of monasteries and nunneries being of good quality, which he clarified did not mean having big buildings, but study and practice of good quality going on inside.

When it was pointed out to him that there are also two nunneries under the auspices of Tawang Monastery he encouraged the nuns too. He told them that now the first group of nuns have qualified as Geshemas it should be possible for other grades of degree to be awarded to nuns. For example, on completion of the Perfection of Wisdom and Middle Way classes they could perhaps earn a Rabjampa degree.

He also looked forward to more nuns taking up teaching and recounted watching school children skilfully debating in a settlement near Nagpur. He had asked who their teacher and was pleasantly surprised that she was a nun. He said he had praised her good work.

Tomorrow, at Yiga Choezin again, His Holiness will give the Rinzin Dhondup Empowerments in the morning. This will be followed in the afternoon by a public talk at the Kala Wangpo Convention Centre.