First Day of the Kalachakra Empowerment - Entry into the Mandala January 11, 2017

Bodhgaya, Bihar, India - His Holiness the Dalai Lama left his residence at Namgyal Monastery early this morning to spend four and a half hours performing the prerequisite rituals for the Kalachakra Empowerment. These involved prayers, sadhanas, consecration of the vase, generation in front, offerings, ritual cake offerings and self-generation practices. He took little time to eat lunch before walking out onto the stage before the Kalachakra Temple. Once again he waved to the crowd in each direction and thousands waved back. There are now estimated to be 200,000 people here from 95 countries.

On his way back, His Holiness stopped to greet the eminent Lamas who sit on either side of the throne. To His Holiness’s left, as he looks out to the audience, is the Ganden Tripa, Jetsun Lobsang Tenzin, Spiritual Head of the Geluk Tradition; his predecessor Ganden Trisur Rinpoche; Katok Getse Rinpoche of the Nyingmapas; Jangtse Chöjey; Sharpa Chöjey; the Khambo Lama, Chief Lama of Mongolia; Thamthog Rinpoche, Abbot of Namgyal Monastery and the Nechung and Tseringma Kutens. To His Holiness’s right is Sakya Trizin, Head of the Sakya Tradition; Gyalwang Karmapa, Head of the Kamtsang Kagyu Tradition; Taklung Shabdrung, Head of the Taklung Kagyu Tradition; Khondung Gyana Vajra Rinpoche, Sakya Trizin’s younger son; the infant Trulshik Rinpoche; Woeser Rinpoche from Mongolia and Kundeling Rinpoche.

Today, the ‘Heart Sutra’ was recited first in Japanese and then in English. His Holiness led the recitation of the Homage from ‘Ornament for Clear Realizations’ followed by the Homage to the Buddha, praising his explanation of dependent arising from Nagarjuna’s ‘Fundamental Wisdom’:

I prostrate to the perfect Buddha,
The best of all teachers, who taught that
That which is dependent origination is
Without cessation, without arising;
Without annihilation, without permanence;
Without coming; without going;
Without distinction, without identity
And peaceful - free from fabrications. 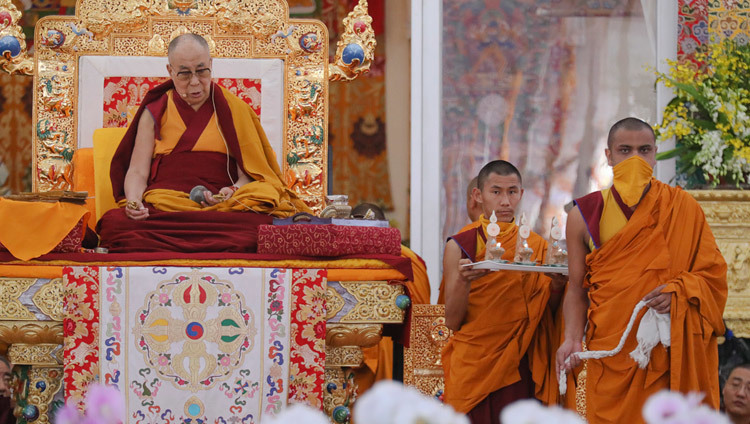 “Because all mother sentient beings want to be happy and don’t want to suffer,” His Holiness began, “we have a responsibility to lead them to enlightenment. Even if it’s simulated to start with, it’s important to cultivate a bodhichitta motivation.”

In a brief summary of the Buddha’s teaching His Holiness mentioned that he taught the Four Noble Truths in the First Turning of the Wheel of Dharma, the Perfection of Wisdom in the Second and the subjective mind of clear light in the Third.

“One of the ways to access these subtler states of mind,” His Holiness observed “is to employ dream yoga or lucid dreaming. As a result, you may attain a dream body which can separate from the gross body. Meditators can use this opportunity to access the subtle mind of clear light and attain the illusory body. Making the clear light mind manifest is what we are aiming to do as a result of this Kalachakra Empowerment.

“I’ve done the self-generation, made the offerings and sought permission to give the seven empowerments in the pattern of childhood.”

His Holiness explained that there is a tradition associated with the Kalachakra Tantra of giving the empowerment to large gatherings. He mentioned that on this occasion many people in Tibet and China had wanted to attend this ceremony in Bodhgaya, but had been unable to do so due to circumstances beyond their control. He said that as a result of their devotion, by following the proceedings and directing their minds towards him, they could be confident of receiving the empowerment, even at a distance. He compared this to Vinaya procedures for granting remote ordination.

Proceedings for the empowerment began with the formal offering of a mandala, in which the entire Kashag, led by Sikyong Dr Lobsang Sangay, took part. There followed the removal of obstacles, the distribution of flowers, the taking of vows, generation of the all-encompassing yoga, the exhortation to maintain the secrets and the entry, blindfolded, into the mandala.

As His Holiness engaged in the concluding rituals and prayers, he encouraged the audience to disperse. However, it was also announced that the practice of viewing the sand mandala would begin immediately and members of the audience pressed forward to line up to do so. They entered the Kalachakra Temple and were able to gaze on the illuminated sand mandala as they circumambulated it. They were also encouraged to view the thangkas of Kalachakra hanging behind. This went on well into the evening.

Tomorrow will see the actual granting of empowerments.