His Holiness the Dalai Lama Drives from Dirang to Tawang April 7, 2017

Tawang, Arunachal Pradesh, India - When His Holiness the Dalai Lama came downstairs to leave Thupsung Dhargyeling Monastery this morning, the sun was shining on the hills in the distance and there was a welcome blue in the sky. From the veranda of the monastery he greeted a group of local people sitting on ground below waiting to see him, telling them once again how important it is to develop a sound understanding of what the Buddha taught. Before leaving Dirang he stopped to visit the temple lower in the town from where he gave the Kalachakra Empowerment to 5000 people in 1983. 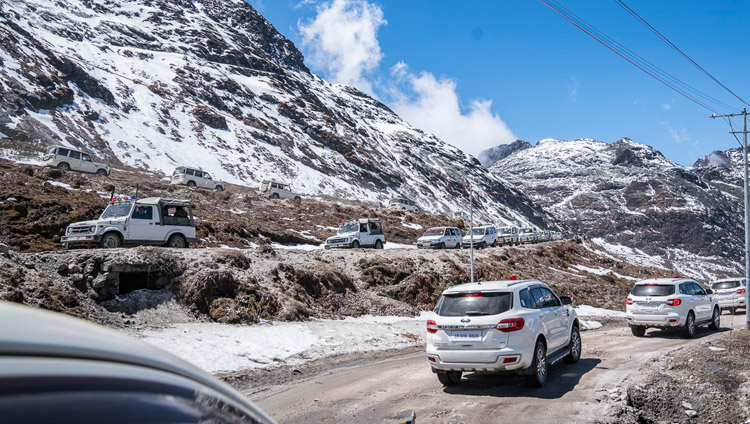 The road from Dirang climbed steadily until the 4170 metre Sela Pass which marks the end of West Kameng district and the beginning of Tawang. At each village on the way people were gathered to greet His Holiness as he passed. Adults were mostly dressed in traditional Mönpa costume, while many of the children were in school uniform. On the pass, snow could be seen here and there, but the road was clear. His Holiness and his party were offered tea and refreshments before continuing their journey.

On the descent from the pass His Holiness stopped for lunch at Mönpalpung Jangchub Chökhorling, a Karma Kagyu Monastery in the town of Jang. In addition to prayer flags and the international Buddhist flag, the Gyalwang Karmapa’s ‘dream flag’ flew prominently along the road. Since so many people had gathered to welcome him His Holiness briefly spoke to them from the steps of the monastery. He told them that Vasubandhu wrote that the Buddha’s teachings can be categorized as scriptural and realizational and the only way to preserve them is through study and practice. That is what he urged them to do.

From Jang His Holiness drove on towards Tawang. The closer he reached to the town the more people thronged the road to greet him. Almost everywhere they made billowing smoke offerings from piles of burning juniper leaves. In many places too tables had been set up bearing traditional offerings and statues to be consecrated as he passed. Often chairs were arranged for the expected guest. And in villages all along the way was a profusion of delightful potted plants colourfully in bloom. On the outskirts of the town mixed groups of local people danced and sang and Snow Lion dancers performed in joyful welcome. 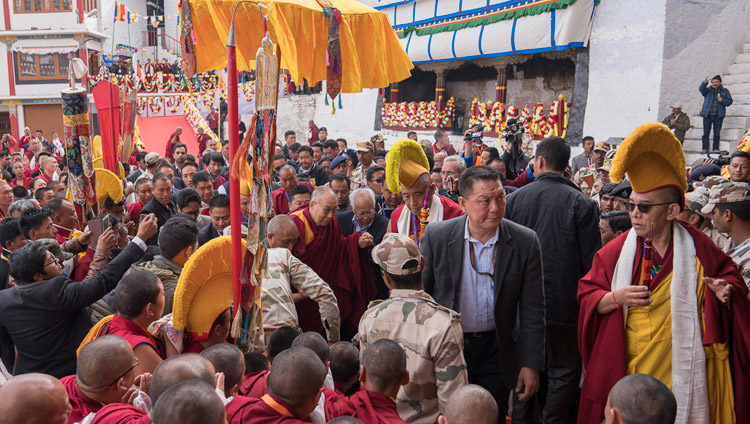 Arriving at Tawang Monastery His Holiness was accorded traditional hospitality. Monks played horns as he was escorted into the temple under a ceremonial umbrella. Once seated inside butter tea and sweet rice were served while he spoke briefly.

“Tashi Delek to everyone. Today I’ve come through many places that are traditionally Buddhist, where people expressed their devotion by waiting on the road. I’ll be teaching more over the next few days so there’s no need for me to say much now. The real temple should be built in the mind—try to create the wisdom of Manjushri in your brain and the compassion of Avalokiteshvara in your heart. If you can do that, that’ll be a real blessing. It seems to me that since I first passed through this region in 1959 interest in the teachings has revived and developed.

“One of the characteristics of Buddhism is its ability to explain philosophical points of view on the basis of reason. If we study rigorously and develop a sound understanding of what the Buddha taught, his teaching will survive for many more centuries. From Ladakh to Arunachal Pradesh people’s interest and awareness of the Buddha’s teachings has lately been growing. In the past there were many monasteries in Tibet and the Himalayan region, but effective study and education took place mostly in the great centres of learning. More and more I am encouraging monasteries like this to organize classes in which anyone who is interested can learn and strengthen their faith and understanding.

“We haven’t got much time, but I daily dedicate my body, speech and mind to the service of others as Nagarjuna advises:

“So I’ll be explaining how to practice over the next three days. “

Tomorrow, at Yiga Choezin, His Holiness will begin to teach the middle volume of Kamalashila’s ‘Stages of Meditation’ and Thogme Sangpo’s ‘37 Practices of a Bodhisattva’.