Tawang, Arunachal Pradesh, India - Despite forecasts of thunderstorms in the vicinity, this morning the sun shone on the distant hills and there were large patches of blue in the skies over Tawang. His Holiness the Dalai Lama too was in a jovial mood when he emerged from his rooms at the top of the Dukhang, the main temple of the 17th century Tawang Monastery. He stopped frequently to greet well-wishers on his way to a waiting car that would carry him to the Yiga Choezin teaching ground lower down the hill. His first task on reaching there, accompanied by Chief Minister Pema Khandu, was to unveil a plaque inaugurating the Gyalwa Tsangyang Gyatso High Altitude Sports Complex and the foundation stone for a prospective Government Degree College.

His Holiness greeted the crowd, estimated to number 50,000, as he walked to the throne that had been set up at the front of a temple pavilion. He paid particular attention to the senior citizens who had been accommodated in the front rows, leaning over the rail to speak to them directly. 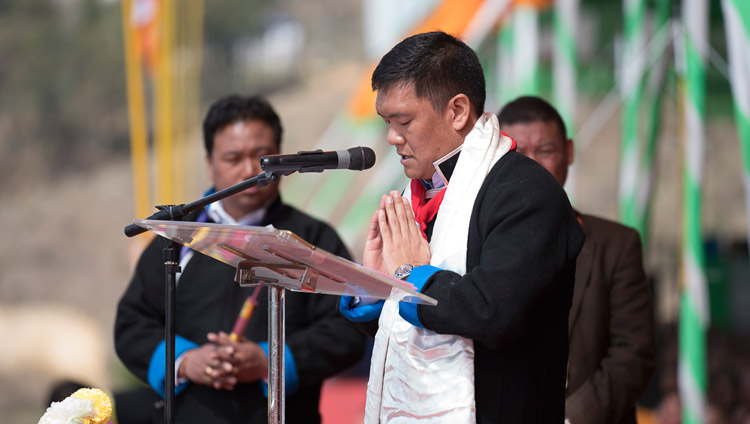 The Chief Minister spoke first, thanking His Holiness on behalf of the people of Mönyul not only for coming to Tawang once again, but also for enduring the long journey by road that brought him to the threshold of many people’s homes. He recalled that after His Holiness crossed the border at Kenzamani in early April 1959 Tawang was the first Indian soil to receive the blessings of his presence. Tawang Monastery was also then the first place where he gave a Buddhist teaching. He praised His Holiness as an ambassador of non-violence, who is to the 21st century what Gandhi-ji was to the twentieth. Noting that Tawang was the birthplace of the Sixth Dalai Lama, the Chief Minister requested His Holiness to consider giving the Kalachakra Empowerment there. He ended with prayers for His Holiness‘s good health and long life.

His Holiness began his address by acknowledging how touched he is by the faith and devotion the Mönpa people show him. He told them how fondly he remembers passing through this region in 1959. He added how pleased he was to have just unveiled the foundation stone for a new educational institution.

“Human happiness arises from affection,” he said. “The greater the love and compassion there is among you, the happier and more contented you feel. When someone among you is angry, it disturbs you all. I believe we can ensure that the 21st century is an era of peace by more widely cultivating compassion. I was due to reach here by helicopter, but as it turned out I came by road with the added benefit of making contact with far more people on the way. I’d like to thank every one of you who came out to welcome me. 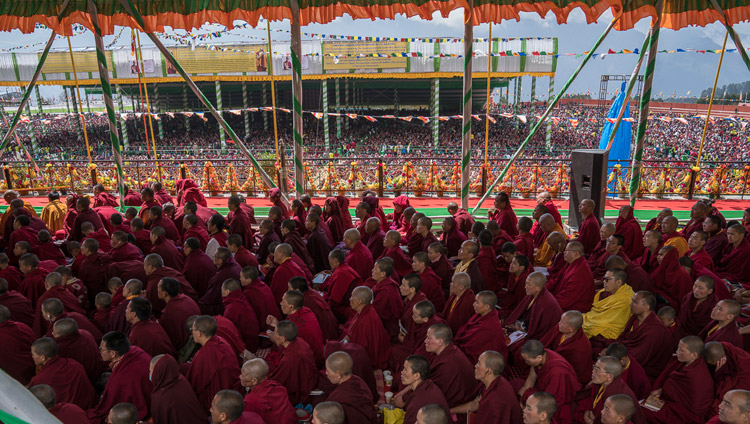 “In 1959, the situation in Lhasa was desperate and slipping out of control. I tried to resolve the situation without success. Since 1956 the PLA had used military force to effect change in Do-mey and Do-kham and we had run out of means to mollify them. Prime Minister Nehru organized help from the point where I crossed the border. I met him first in Beijing and later in India in 1956 had discussions with him about the situation in Tibet. When I had to flee Lhasa in 1959, it was only once I crossed the border into India here that I felt free of risk and danger. The local people showered me with respect and devotion and treated the many Tibetans who came after me with immense kindness.

“The Chief Minister has requested me to give a Kalachakra Empowerment here. I can’t promise anything now, but I’ll keep it in mind. The main purpose would be for you all to become more acquainted with the Dharma. Right now I’m going to read through the ‘Stages of Meditation’, which explains the basis, path and result, and also touches on how to develop calm abiding and special insight meditation.

“Nyengön Sungrab draws a distinction between Buddhist teachings that belong to the general structure and those that have been framed with particular disciples in mind. The Four Noble Truths and 37 Factors Aligned with Enlightenment that we find in the Pali tradition and the Perfection of Wisdom teachings of the Sanskrit tradition belong to the general structure. Whether the Buddha taught them in the guise of a monk or having arisen as the deity of the mandala, the Tantras are teachings framed for specific disciples. In Tibet teachings of the general structure spread far and wide, there are the 18 treatises of the Sakyas and the 13 classic texts of the Nyingmas, but there seems to have been much more eager interest in tantric instructions. 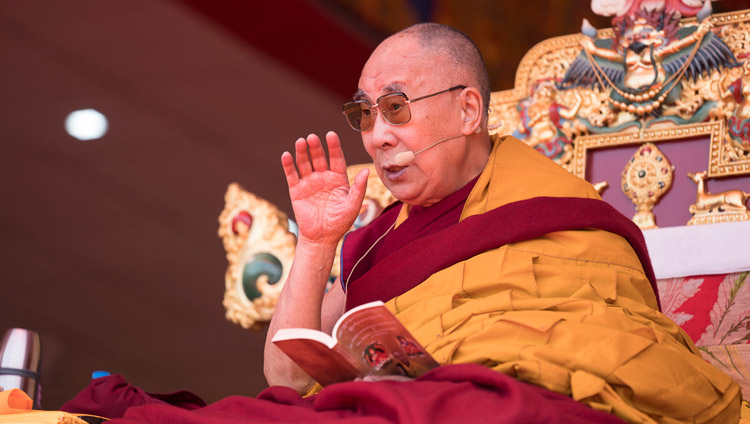 “No matter how long you spend in retreat and no matter how many mantras you recite, if your mind is not transformed the practice isn’t of much help. However, if you think about love and compassion and try to understand emptiness over several years, you’ll see a change in yourself. I myself do deity-yoga practices, but what has really enabled me to transform my mind has been meditating on emptiness and dependent arising, as well as on love and compassion.

“The Nyingma tradition speaks of the Nine Yanas or Vehicles, the three outer vehicles of the Hearers, Solitary Realizers and Bodhisattvas; the three inner vehicles of Vedic-like asceticism, the kriya, ubhaya and yoga tantras and the three secret vehicles of powerful transformative methods maha, anu and ati yoga.”

His Holiness explained that the ‘Stages of Meditation’ was composed in Tibet at the request of Trisong Detsen, while ‘37 Practices of Bodhisattvas’ was written by a Tibetan master, acclaimed as a Bodhisattva, who was known as Gyalsay—Son of the Conqueror—Thogme Sangpo. It teaches about the awakening mind of bodhichitta. His Holiness reminded his listeners that before beginning to read these texts, both teacher and disciples should examine their motivation.

He reported how impressed he had been when he read of a lama called Tseley Rangdol who made three pledges in relation to his teaching: not to ride animals from place to place, to eat only vegetarian food and not to take any payment for his teaching. The hermit Gotshangpa also said that lamas should not teach for material gain. His Holiness added that disciples too should have a proper motivation, quoting Aryadeva’s ‘400 Verses’ as saying, “get rid of unwholesome deeds, get rid of wrong view, and get rid of all distorted views of objectification.” His Holiness recommended looking into the faults of destructive emotions, developing a determination to be free and cultivating the aspiration for enlightenment of the Bodhisattva ideal. 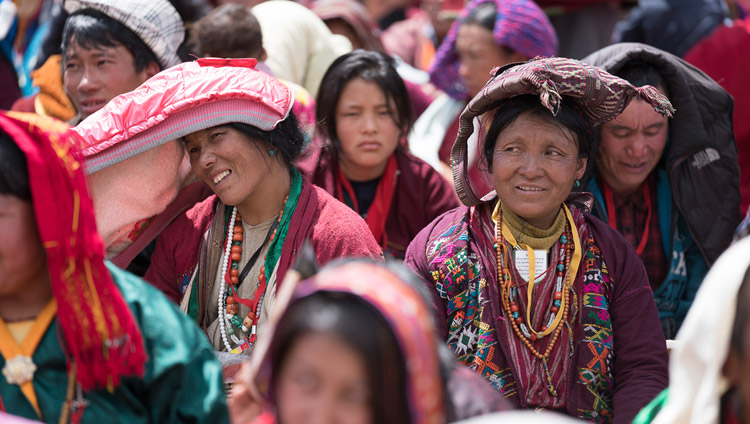 As he began to read Kamalashila’s ‘Stages of Meditation’, His Holiness disclosed that he received it from Sakya Abbot Sangye Tenzin, who had received it at Samye from a Khampa Lama who may have been a student of Khenpo Shenga. He went through it rapidly touching on what the mind is, training the mind, compassion and developing equanimity, the root of loving-kindness. The text also referred to the practice of calm-abiding and how to actualize special insight, the notion that it is not that things don’t exist, it’s just that they don’t exist as they appear to do.

After lunch His Holiness met with members of the press. He started by telling them about his commitment to promoting human values, principally compassion. He told them that scientists’ conclusion that basic human nature is compassionate is a sign of hope that would be absent if it was anger instead. He lamented that modern education is too oriented to material goals and insufficiently concerned with inner values. He announced that later this month he will meet with co-compilers of a curriculum for inculcating secular ethics in school and university students. He also voiced his support for religious harmony and his admiration for the way it has long flourished here in India. Finally, he mentioned having devolved all his political responsibilities to an elected leadership, but remaining keenly concerned about Tibetan ecology and keeping Tibetan culture and language alive. 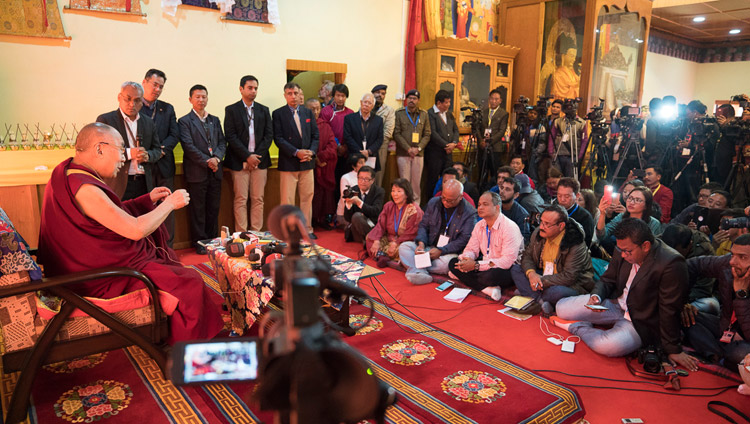 Interest in his successor led to His Holiness being asked directly where the 15th Dalai Lama will be born. He replied, “Nobody knows. I pray I’ll continue to be able to be of service to sentient beings, but I sometimes doubt if I’m even the reincarnation of the 13th Dalai Lama.” When another journalist mentioned that the Chinese government has asserted it is their right to make a decision about his successor, His Holiness called it nonsense. He conceded that in the past the Chinese Emperor had taken an interest in the recognition of the Dalai Lama, but that was when the Emperors considered themselves spiritual disciples.

“If the Chinese government wants to be involved in this they should first announce their acceptance of the theory of reincarnation. Then they should recognise reincarnations of Mao Zedong and Deng Xiaoping for their claim to have any legitimacy.”

When it was suggested that the people of Tawang would dearly love to have a Dalai Lama born amongst them again, His Holiness responded that there are people who say the same thing in Ladakh and even in Europe too. He reiterated that as early as 1969, in his March 10th statement, he had made it clear that whether or not there should be another Dalai Lama was up to the Tibetan peoples. He accepts that if they decide that it is an institution that is no longer relevant, it will cease. He expects Tibetan refugees, Mongolians and people of the Himalayan region from Ladakh to Tawang to have a say in this decision.

He mentioned that later this year he may resume discussions with prominent Tibetan spiritual leaders on how to proceed. He admitted that he has answered the question about whether a future Dalai Lama could be a woman with his own question, “Why not? There are already precedents of high female reincarnations.”
He repeated a response he first gave in Newark some years ago, taking off his glasses and challenging his questioners, “Look at my face. Do you think this talk of my reincarnation is urgent?”

Finally, he was asked how he stays so well and answered,

“I sometimes answer this, ‘That’s my secret,” but the truth is because of peace of mind. That and consistently getting nine hours sleep. I turn in at about 6.30 in the evening and get up at 3.30 the following morning to do 4 - 5 hours of meditation. Not just shutting my eyes and relaxing the mind, but engaging in intense analysis about, for example, dependent arising and how it relates to reality.”

Tomorrow, His Holiness will give an empowerment in relation to the Thousand Armed, Thousand Eyed Avalokiteshvara and visit Ugyen Ling, the birthplace of Tsangyang Gyatso, the 6th Dalai Lama.