His Holiness the Dalai Lama Speaks to Delegates from the First Tibetan Women’s Empowerment Conference February 23, 2017

Thekchen Chöling, Dharamsala, HP, India - This morning at his residence, His Holiness the Dalai Lama addressed more than 300 delegates participating in the first Tibetan Women’s Empowerment Conference. The conference, organised by the CTA, has been taking place in Gangchen Kyishong and has involved representatives of the Tibetan settlements right across India. He began by asking if they were happy with the discussions they’d been having and suggested that rather than simply talk about gender equality it was better to work on putting it into effect. 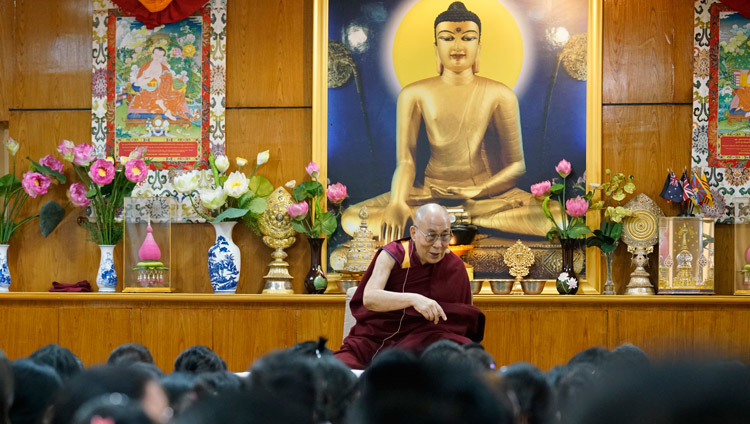 “We are all part of the 7 billion human beings alive today, but some of us are very well off, while elsewhere others are starving. I believe we can address this disparity if we work hard and develop self-confidence. That in turn depends on cultivating inner strength and the root of inner strength is developing compassion for others.”

Noting that Tibetans have been in exile for almost 58 years, His Holiness recalled meeting Indian leaders like Rajendra Prasad and Sarvepalli Radhakrishnan, who, in addition to being President and Vice President of the country respectively, impressed him with their scholarship. Listening to Radhakrishnan elegantly declaim verses from Nagarjuna and Chandrakirti in Sanskrit brought tears to his eyes, he said. However, he added that he also secretly suspected that he both understood and could explain better what the verses meant.

His Holiness attributed this confidence to the rigorous training he’d undertaken in Tibet, which was founded on the system originally established in the 8th century by Shantarakshita. This combined an exploration of philosophy with a strict command of reason and logic. This approach encourages investigating the topic in hand from different angles, something that can be useful in any branch of education.

He observed that since scientists are increasingly recognising that a disturbed state of mind is bad for our health, there is a growing appreciation of the need to learn more about our emotions and most particularly how to tackle our destructive emotions.

“Many of the world’s problems can be attributed to anger,” His Holiness explained. “The ever growing arms trade is based on a mixture of anger and fear and yet weapons bring no benefit. They don’t provide food. Their only function is to maim and kill other human beings.” 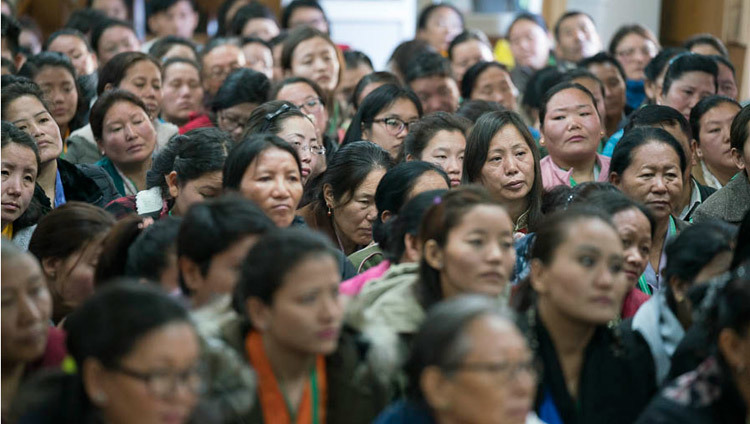 Many Indian traditions pursued concentration in meditation and gathered a deep understanding of the workings of the mind. Although this ancient knowledge has tended to be neglected more recently in India, it was kept alive in Tibet. What’s more, the efforts that were made to translate mostly Sanskrit Buddhist literature into Tibetan resulted in a profound enrichment of the language such that today Tibetan is the medium through which this ancient knowledge can most accurately be conveyed.

His Holiness mentioned how he had encouraged monasteries that traditionally focussed on rituals to introduce study and education. Similarly he had encouraged nunneries to do the same. One result, he proudly declared, was the recent award of the first Geshe-ma degrees to twenty fully qualified nuns. Addressing the three Geshe-mas in the room, he advised that it was now their responsibility to teach in their nunneries and schools.

His Holiness also touched on recent proposals for the Dalai Lama Institute for Higher Education in conjunction with the University of Mysore to offer PhD programs for lay-people to study Buddhism and the inner science of the mind.

Alluding to the position of women in Buddhism, His Holiness affirmed that the Buddha had described men and women as having equal potential and had provided full ordination for both. He discussed the as yet unresolved difficulties in introducing or restoring the Bhikshuni tradition, but pointed out that a specific Vajrayana precept encourages respect for women in forbidding looking down on them. Furthermore, in Tibet there was an established tradition for recognising female reincarnations such as Samding Dorje Phagmo.

Referring to the role of women in the world, His Holiness reported scientific findings that women are more sensitive to the sufferings of others in addition to the great affection they provide as mothers. He explained how human society has developed from a time when hunter gatherers simply shared what they had to the emergence of agriculture and a sense of property. This led to a need for leadership and since the criterion was largely physical strength, male dominance emerged. Education has since restored a degree of equality between men and women. His Holiness wryly observed that since women are generally less aggressive than men, if more countries were led by women, the world would probably be a more peaceful place.

His Holiness concluded by congratulating the Kashag on taking the responsibility to promote women and encouraged the women to take full advantage of the opportunity. The meeting ended with his posing for photographs with different groups who are attending the conference.