His Holiness the Dalai Lama Talks to the FICCI Ladies Group and The Mother’s International School January 21, 2017

New Delhi, India – Before leaving Bodhgaya for Delhi on 16th January, His Holiness the Dalai Lama visited the Mahabodhi Stupa and the Kalachakra Temple. Once in Delhi, he took a few days’ rest.

This morning, the Ladies Wing of the Federation of Indian Chamber of Commerce and Industries (FICCI) invited him to speak on the Power of Compassion. His Holiness was welcomed on arrival at FICCI headquarters by the President, Mrs Vinita Bimbhet. Special Guest Mrs Pratibha Advani introduced His Holiness to the audience recounting some of her previous meetings with him. She mentioned recently being especially touched that he took the time to personally console her and her father L.K. Advani when her mother passed away. 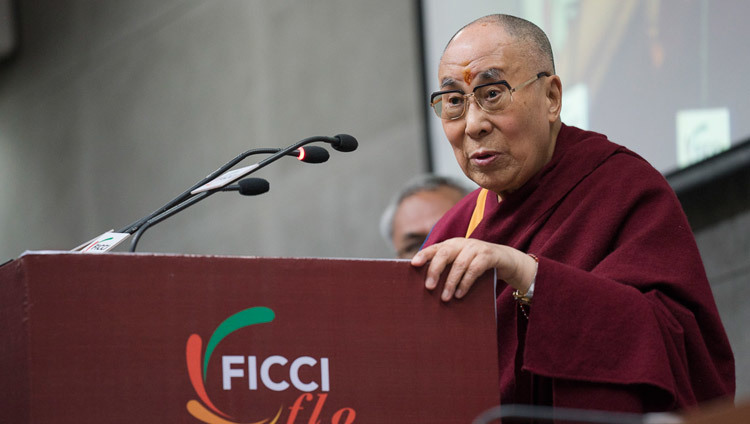 His Holiness opened his remarks by stating that mentally, emotionally and physically all 7 billion people in the world are the same. We all receive intense affection from our mothers, without which we would not survive.

He advised being more positive in dealing with problems,

“No matter how difficult or complicated a situation may be, I maintain peace of mind. If we apply our human intelligence we can view things from a more holistic standpoint. From a wider perspective we may see that compared to the many other problems in the world what we are facing is not very significant.

“We need to combine this intelligence with warm-heartedness, which is the source of peace of mind. From my own experience I can tell you that peace of mind makes all the difference. Not only does it help us sustain good health, it gives rise to happy individuals, happy families, happy communities and ultimately a happy humanity.

“However, change like this must start with individuals. Sometimes you may feel that as just one person you cannot change the world. However, change in society has to start with individuals. What’s more, since we are all part of humanity, each of us has a moral responsibility to contribute to the common good. If you share ideas like these with ten of your friends, and they share them with ten of their friends, we can easily influence a hundred people—that is how we can change the world.” 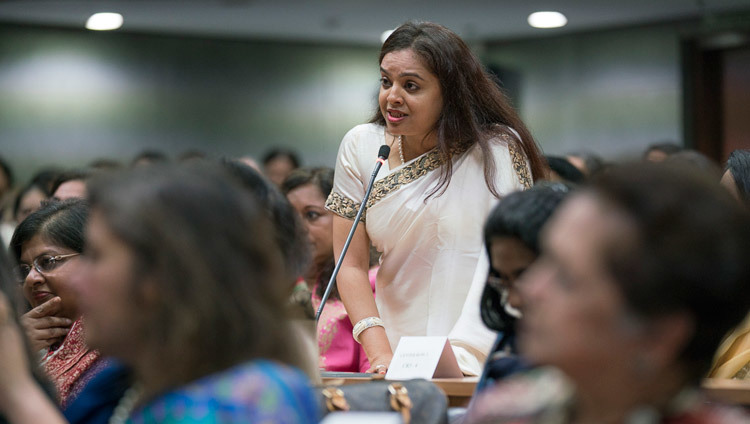 In fielding questions from the audience His Holiness talked about the state of religion in India today,

“In India, concepts such as ahimsa have existed for more than three thousand years. The time has come for Indians to put these ideas into effect. Since independence, modern and technological education have really expanded in India, however, these need to be combined with ancient Indian knowledge of the workings of the mind. Unfortunately, today little more than ritual remains of India’s rich and ancient knowledge traditions. However, in Tibet through rigorous study and practice we have preserved the traditions of Nalanda University. Our knowledge is India’s knowledge and I am pleased to say that more and more young Indians are showing interest in this ancient Indian heritage.

“Combining ancient knowledge with modern understanding will not only be meaningful to the life of this country, but can also be of benefit to the wider world. I am but a messenger of ancient Indian thought. The reality is that your ancestors were our gurus. Now the guru of ancient times has become the chela and we chelas have become the guru. I urge you to pay closer attention to your ancient Indian heritage.”

His Holiness advised that it is important for many Indian temples and ashrams to become centres of learning. He said it was not sufficient for them to remain merely places of worship. There should also be opportunities for classes, seminars and discussions to be held, as well as opportunities to question religious leaders.

After lunch with senior members of the Ladies Wing His Holiness drove to The Mother’s International School, a public secondary school established in New Delhi by the Sri Aurobindo Education Society. 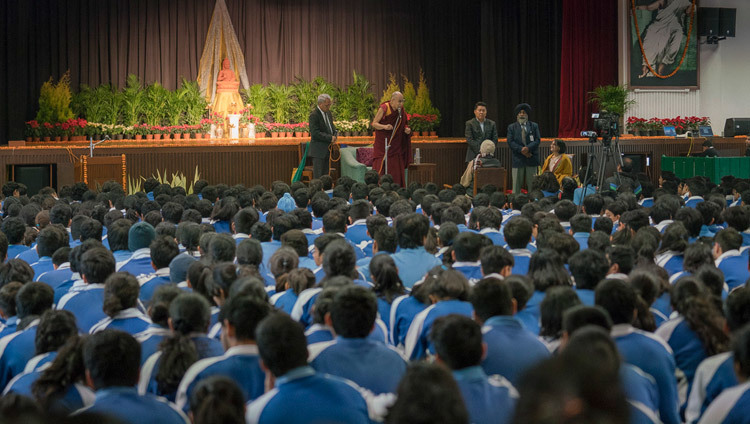 Once His Holiness had taken his seat, a group of students gave an artistic performance. School Principal, Mrs. Sangamitra Ghosh welcomed him to the school and two students introduced him to the students and faculty.

“The past is past and can’t be changed, but the future remains open,” he began. “Young students like you belong to this 21st century and you have the opportunity to make this a gentler, more peaceful century. Right now on this planet there are people facing conflict and starvation. Many innocent people are dying. Many of those engaged in terrorism are educated. The question we need to ask is why they are becoming troublemakers. Why do we see so much corruption among educated people?

“I believe it is due to our materialistic orientation. Many of my friends, scientists among them, share my view that something is lacking from modern education. It only focuses on material goals and lacks any conviction about deeper human values. The time has come for us to explore how to introduce moral ethics into our education curriculum—an ethics based not on religion, but on our common experience, common sense and scientific findings.

“As the generation with responsibility for the 21st century, it will be up to you to create a better world, a more peaceful, happier century. You’ll need to have vision and not to be content with the existing system. You’ll need to use your critical thinking in order to further develop your human intelligence. You’ll need to question things, asking why and how over and over again. This will give rise to more questions. This is the approach of analytical meditation or vipashyana. The reason my brain is still sharp today is because I’ve trained it in such an analytical way. You’ll need to do the same if you are to create a happier world by the end of this century.”

Asked whether Buddhism was a religion or philosophy, His Holiness replied, 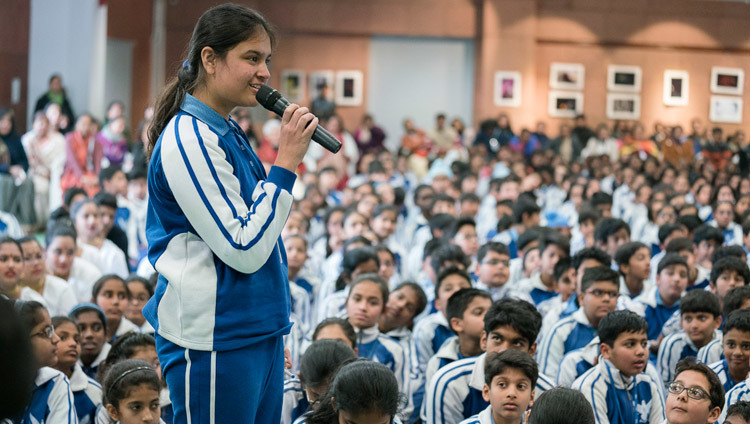 “Since Buddhism does not believe in a creator god, but in self-creation, some people have described it as a science of mind. It takes a philosophical approach. Buddhism’s Pali tradition relies predominantly on the written records of what the Buddha said. The Sanskrit tradition however, especially the Nalanda Tradition, relies on reason and understanding. The Buddha himself declared that his followers should not accept what he taught just out of faith, but only after examining it and investigating it in the way a goldsmith would test gold.”

When a young student wanted to know what aspects of the world His Holiness would like to see change, he answered,

“The present education system, which is oriented towards material goals must be combined with inner values. We must also take greater care of the natural environment, which is something each of us can do. Then there is the need for greater inter-religious harmony to prevail. India is the only country where all the world’s major religious traditions have lived together for centuries in mutual respect and understanding. Finally, we must make greater efforts to reduce the gap between rich and poor.”

Before he left, His Holiness took tea with some of the school’s senior staff members and planted a tree in the school courtyard.