His Holiness the Dalai Lama Talks to Trainee Officers of the National Police Academy February 11, 2017

Hyderabad, Telangana, India - This morning His Holiness the Dalai Lama took a relatively short and uneventful flight from Vijayawada to Hyderabad where he was received by representatives of the Sardar Vallabhbhai Patel National Police Academy. He drove to the Academy where he was welcomed to the Rajasthan Bhavan Guest House by the Director of the Academy, Ms Aruna Bahuguna, the first woman to occupy that eminent post. The Rajasthan Bhavan stands on a hill with a view across green lawns and the Mir Alam Tank to Hyderabad in the distance. 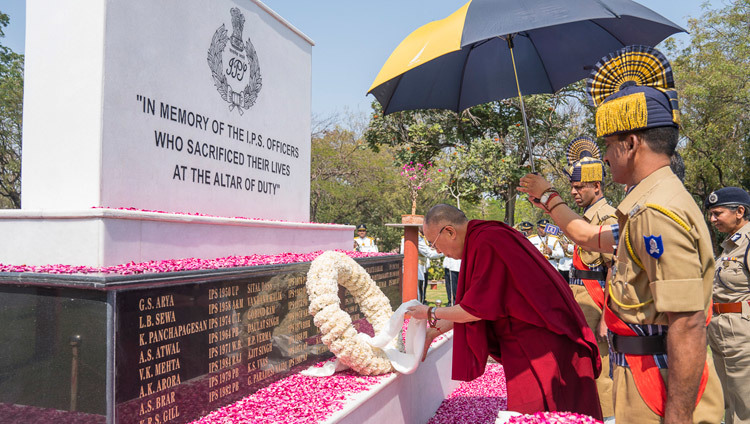 After lunch, His Holiness was driven in an electric golf cart through the campus to the Martyr’s Memorial, where, while a white-uniformed Police Band played, he laid a wreath. Behind the Basic Course Training Complex he planted a sapling that will commemorate his visit. Arriving at the Central Hall, where an audience of about 200, including 139 IPS Probationers and 15 officer trainees from Bhutan, Maldives and Nepal, waited to listen to him, he took his seat on the stage. A young woman trainee introduced him and invited him to speak.

“Usually I like to stand when I speak in public,” he began, “but after yesterday’s exertions, I feel a little tired. The day before yesterday too when I reached Vijayawada I had thought of paying a visit to Amaravati, a Buddhist site in the vicinity of Nagarjunakonda, but while in my mind I was eager to go, my body told me it was too tired. So, may I have your permission to speak to you sitting down?”

The question elicited a crisp, reply in unison, “Yes sir.”

“Dear brothers and sister is how I always address the audience, because we are all the same at human beings. These days many of the problems we face are of our own making since we neglect the fact that at a fundamental level we are all the. The way we are born and the way we go are the same. We are physically, mentally and emotionally the same.

“We all want to live a happy life and we all have a right to do so, if we were really to recognise that there’d be no room for exploiting, bullying or killing other people. This is why we need to make the effort to appreciate the oneness of humanity. I am very happy to be here once more visiting this Academy named after Sadar Patel who I admire for his far-sightedness and decisive character. You, too, are fortunate to be here in such a pleasant place that reminds me of a retreat centre. When I was talking to the Director, I asked where the shooting range was. She told me it’s on the other side. 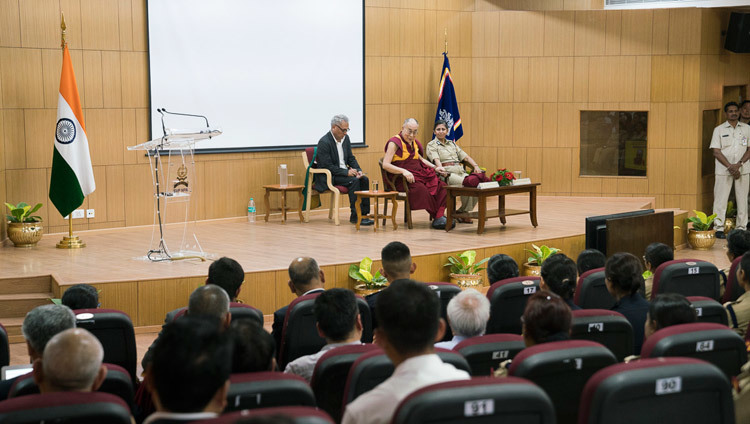 “In 1956 when I first came to India I noticed the bulge under one of my bodyguard’s jacket and asked him what it was. He showed me his gun saying ‘This is an instrument of sin.’ However, I think we need to be clear that whether a human action is ‘sin’ or not depends on the motivation and goal involved. In your case as members of the Indian Police Service, part of your job is to protect the institutions of this most populous democracy. I think it is worth noting that among India’s various neighbours, this country is remarkably stable and peaceful. You may carry a gun, but it is for a protective purpose.

“For more than 3000 years, ahimsa has flourished here. Ahimsa is related to compassion. But you only actually engage in ahimsa when you have the opportunity to lash out violently at someone, yet restrain yourself. For ahimsa to be effective, you need to be motivated by karuna—compassion.”

His Holiness mentioned that among the ancient Egyptian, Chinese and Indus Valley civilizations, the Indus Valley communities produced by far the greater number of thinkers and advanced schools of thought. He said he believed that what masters like Nagarjuna, Aryadeva and Chandrakirti had to say remains of relevance today. He mentioned discussions he’s held for more than 30 years with scientists, who now show an intense interest in ancient Indian knowledge.

“In the 8th century,” he explained, “despite existing connections with China, the Tibetan Emperor elected to seek Buddhist teachers in India. Nalanda was the leading institution with more than 10,000 students. Nalanda’s top scholar, Shantarakshita was invited to Tibet. He came and established Buddhism there, setting the pattern for the study of philosophy, not merely on the basis of faith, but in the light of reason and logic. This is something unique to the Nalanda tradition, which we Tibetans have kept intact since that time. Today, scientists are eager to learn what ancient Indian tradition has to say about the workings of the mind and emotions. Meanwhile, I have been urging young Indians to combine a modern education with the values and insights of ancient India that is part of their heritage.” 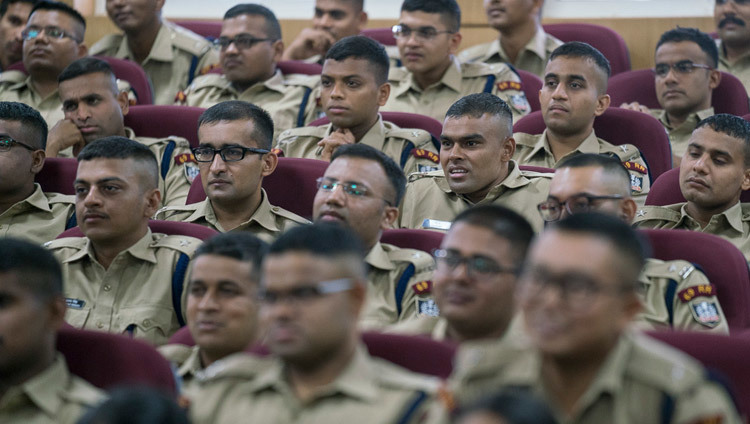 In his responses to questions from the audience, His Holiness reiterated the need to study rather than just rely on the performance of rituals. In the modern world, where the pursuit of money is considered more important than the cultivation of inner values he suggested a fresh approach is required to incorporate secular ethics or universal values into the system of education.

Addressing the needs of trainee police officers directly His Holiness advised them to be compassionate, truthful and honest. He mentioned that in some countries people are afraid of the police.

“In India, where police have a role in the protection of democracy, if you are honest, your work will be transparent. Your subordinates will trust you. If you say one thing, but act differently yourself, there’ll be no trust and no friendship. Therefore, it’s essential for police officers to be honest, truthful and transparent.”

When a young woman asked how to cope with stress of impending exams, His Holiness advised that sometimes such stress can stimulate you to study better. He said that was his experience once he had decided to take his own final exams.

His Holiness reiterated the importance of incorporating the inner values he refers to as secular ethics into the education system. Since basic human nature is compassionate, he said there is a need to use our intelligence to extend our sense of warm-heartedness. The purpose of education, he continued, is to build a happier society, so what is needed today is a more holistic approach that promotes the practice of love and compassion. He said that if we look ahead, plan and make an effort to encourage the practice of secular ethics, by the end of this century we will have created a more peaceful world.

“I appreciate your inviting me here to share my thoughts with you,” His Holiness concluded. “And I’d like to express my gratitude that since I arrived in India in 1959, the Indian Police have been scrupulous in affording me their protection. Thank you.”

Director Ms Aruna Bahuguna presented His Holiness with a framed memento of his visit. A Bhutanese trainee offered a vote of thanks, thanking His Holiness for coming to talk to members of the SVPNPA. Outside the hall, the trainee officers assembled to pose for a group photograph with His Holiness before he retired for the day. Tomorrow he will give a public talk at the Hitex Open Arena.