New Delhi, India - After travelling from Dharamsala to Delhi yesterday, His Holiness the Dalai Lama was today the guest of Vidyaloke, an initiative, whose name alludes to the light of wisdom, focussed on revitalizing ancient Indian tradition. He was welcomed by patrons of Vidyaloke, Analjit Singh, his wife and son Veer, on arrival at the family house and escorted to his seat on a dais beneath a heated shamiana in the garden. The path, bordered with marigolds, was strewn with rose petals. In his introduction to the occasion, Veer Singh declared that the intent of the gathering was to play a part in reviving Indian wisdom in hope of creating a century of peace. 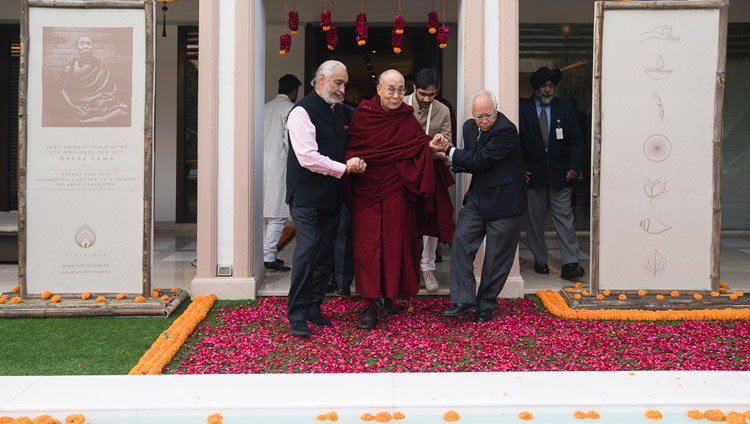 Taking inspiration from Shakyamuni Buddha, an eminent Indian, Vidyaloke had requested His Holiness to teach Nagarjuna’s ‘Letter to a Friend’ and a praise he himself had composed to the 17 Nalanda Masters. After a Sanskrit incantation of the ‘Heart Sutra’ with flute accompaniment, His Holiness began to speak.

“Brothers and sisters, I consider this gathering not to be just about a teaching of the Buddhadharma, my hope is that it will lead to ensuring that the 21st century is a happier, more peaceful era than the last. That’s our main purpose.”

Before continuing he was presented with the eight substances of traditional Indian hospitable offerings, water to wash, water to drink, flowers, incense, light and so forth.

“In the 20th century, human beings faced great suffering,” His Holiness continued, “with widespread killing in the name of ideology and nationalism. However, where, in the early part of the century, people joined up without hesitation when a nation declared war, by the end of the ongoing Vietnam War people began to ask, ‘Why sacrifice so much human life?’ They yearned for peace instead. Towards the end of the century the nations of Europe, where people were fed up with divisions into ‘us’ and ‘them’, created the European Union to be able to work together in a more mature way.

“One of my physics tutors, Carl Friedrich von Weizsäcker, from whom I learned a great deal, told me how in his childhood, French and Germans regarded each other only as enemies. All that has changed, which is a source of hope.”

His Holiness spoke of the fruitful discussions he has held for more than 30 years with scientists. Some of them have observed that human nature is predominantly compassionate. They have shown that constant fear, anger and hatred undermines the immune system, whereas kindness and compassion reinforce it. His Holiness remarked that when we greet other people with a smile, it makes us feel happier. Formality on the other hand leaves us uncomfortable. Children, he said, have no regard for formality, they simply appreciate those who treat them with affection. 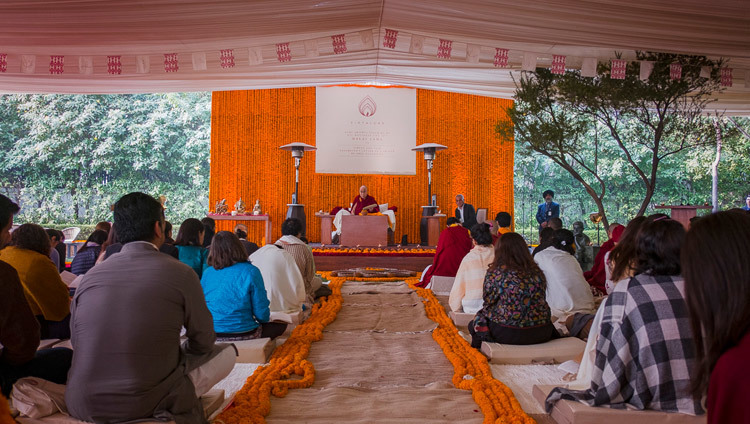 He mentioned that on top of the natural disasters that are increasing as a result of climate change, we face an array of problems that we have created. This is a challenge for all 7 billion human beings, but at the age of nearly 82, he feels time is short. There is a need for concerted action and India with its rich spiritual heritage can play a special role. He spoke of a need to revive inner values, and said that although these have often been associated with religion, today, if they are to have universal appeal, there is a need for a more secular approach.

His Holiness conceded that in the West there are those who regard ‘secular’ as indicating opposition to religion, but made clear that he thinks that during the French and Bolshevik revolutions the target was religious institutions and their tendency to exploit the population rather than actual religious teachings. For this reason he sometimes refers to secular ethics as universal values, but expressed admiration for India’s traditional secularism that respects all religions and even the values of those who have no belief.

“This is the basis for India’s exceptional tradition of inter-religious harmony. Not only indigenous traditions like the Samkhyas, Vedanta, Jainism, Buddhism, and Sikhism, but even traditions from elsewhere, Zoroastrianism, Judaism, Christianity and Islam, live together here in harmony. In the past, people of different faiths and paths learned from one another, as we can see in the Nalanda tradition. Taking such a secular approach, we need to promote universal values, not through prayer or ritual, but through education based on common experience, common sense and scientific findings.

“I always declare Indians to be our gurus because all our knowledge derives from Nalanda—knowledge that is immensely helpful when it comes to transforming our destructive emotions, which therefore remains relevant today. However, I tease my modern Indian friends for becoming too Westernised and materialistic. Even religious leaders seem to emphasize ritual over study. The time has come to pay more attention to ancient Indian thought in the context of tackling our destructive emotions and promoting basic inner values. 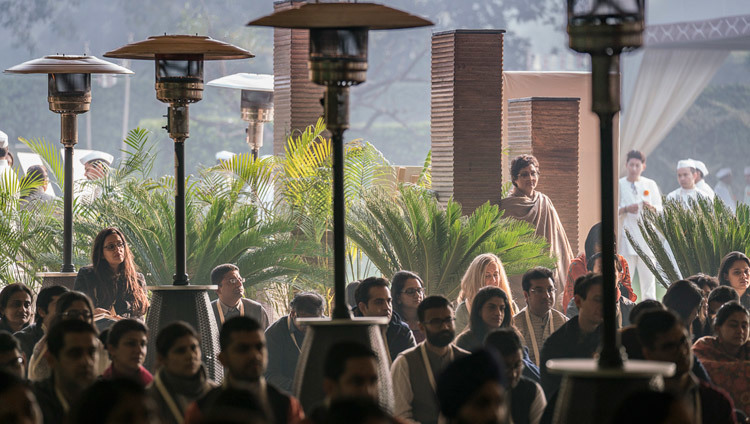 “In the face of a moral crisis and mental restlessness, we need an emotional hygiene much as we observe physical hygiene to preserve our physical well-being. I appeal to young Indians to pay more attention to the wisdom and values of ancient India from a more secular point of view. This country has a great opportunity to combine modern scientific understanding, technological development and ancient Indian wisdom to create a more peaceful, honest and truthful society.”

Next, His Holiness read through the praise he composed to the 17 masters of Nalanda, beginning with Nagarjuna, whose instructions he has found of great help in transforming his destructive emotions and coming to understand reality. He mentioned American psychologist Aaron Beck’s observation that 90% of an angry person’s view of the object of their ire is mental projection, which complies with Nagarjuna’s advice. He also recalled Indian physicist Raja Ramana telling him that he had found ideas that quantum physics considers to be new reflected in Nagarjuna’s writings. Finally, he remarked that there are verses of Nagarjuna’s that he recites and reflects on personally every day.

Going through the verses of the praise he spoke admiringly of Aryadeva, Buddhapalita, and Bhavaviveka who described the extent of ideas that had flourished in ancient India. He praised Chandrakirti, whose ‘Entering into the Middle Way’ (Madhyamakavatara) is a standard text for Tibetan Buddhist scholars and Shantideva. He said that receiving Khunu Lama Rinpoche’s explanation of Shantideva’s ‘Guide to the Bodhisattva’s Way of Life’ (Bodhicharyavatara), describing how to cultivate compassion and temper anger, transformed his life. 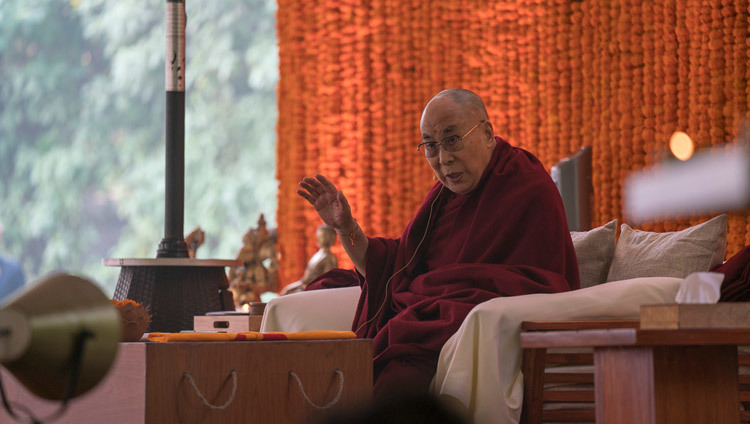 “Today, among the world’s 1 billion Buddhists, only Tibetans and Mongolians have kept the Nalanda tradition, with its logic and reason, alive. This is due directly to the kindness of Shantarakshita, who was supported by Guru Padmasambhava. Shantarakshita’s student, Kamalashila, reinforced the importance of analysis and reason in the face of Chinese masters’ commending non-conceptual meditation alone.

“In addition to these masters of profound view were those who taught extensive deeds, led by Asanga who gathered the five treatises of Maitreya. Asanga’s brother Vasubandhu’s ‘Treasury of Higher Knowledge’ (Abhidharmakoshakarika) provides a wonderful explanation of the workings of the mind and emotions. Dignaga and Dharmakirti wrote about logic and epistemology. Vimuktisena and Haribadra clarified the Perfection of Wisdom teachings. Gunaprabha and Sakyaprabha wrote extensively on monastic discipline (Vinaya).

“Then in the 11th century, after the central authority of the Tibetan Emperors had collapsed and Buddhist traditions had been damaged, the ruler of a small kingdom in Western Tibet invited Atisha to restore Buddhist study and practice.

“When these Nalanda traditions survive nowhere in India and their place of origin, Nalanda, is in ruins, we Tibetans are proud to have kept them alive. Now, through training the mind and the use of logic and reason rather than prayer and ritual alone, it is our hope that we may create a more peaceful world and a happier humanity in the 21st century.”

After a 30 minute tea break, His Holiness answered questions from the audience about being kind to ourselves, ways to study, maintaining a happy demeanour, implementing ancient Indian wisdom in practice and countering mental restlessness by cultivating inner strength. Before embarking on Nagarjuna’s ‘Letter to a Friend’, His Holiness announced that he would like to outline what the Buddha had taught. He noted that in common with most Indian spiritual traditions, the Buddha accepted the idea that we live life after life and the role of karma. 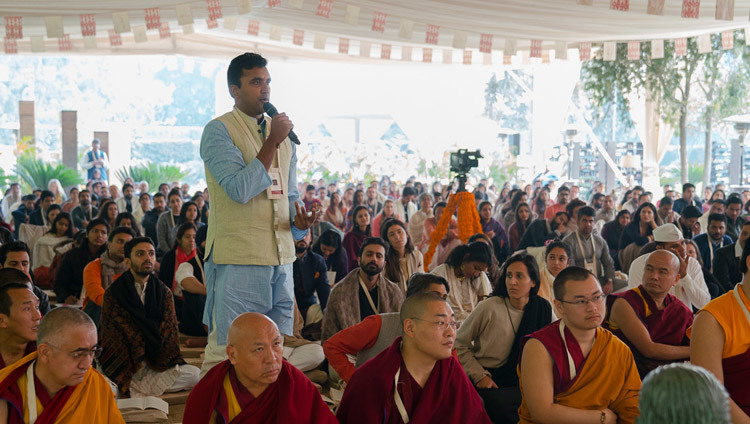 “In many previous lives, the Buddha had the opportunity to train his mind and create good karma. He practised and became enlightened. About 2600 years ago there were beings who were receptive to this and the Buddha appeared as a human being to show followers how to practise. Initially he enjoyed life as a prince in a royal palace, but witnessing death, sickness and old age alerted him to the need to overcome suffering. Leaving the royal life behind, he spent six years in serious meditation, principally cultivating concentration or shamatha, but finally turning to analysis and insight, vipashyana, to realize that the root of suffering is ignorance. Through perfect wisdom he became a Buddha, but in the ‘The Extensive Sport Sutra’ (Lalitavistara Sutra) he is quoted as saying:

Profound and peaceful, free from complexity, uncompounded luminosity—
I have found a nectar-like Dharma.
Yet if I were to teach it, no-one would understand,
So I shall remain silent here in the forest.

“Nevertheless, he sought out his five previous companions, who observed that he was a monk, and that his speech and demeanour had changed. They asked what had happened to him and he explained the Four Noble Truths in the context of causality. Suffering has its origin in causes that can be avoided and cessation of suffering can be achieved by following the path. He explained that no one seeks suffering and that to avoid it we need to understand its causes and eliminate them.”

His Holiness discussed the three levels of suffering, the suffering of suffering, which even animals recognise, the suffering of change and the suffering that pervades existence. He also referred to different levels of subtlety of mind and how they can be employed to eliminate the unknowing of ignorance. He explained that suffering is rooted in disturbing emotions, which in turn are rooted in ignorance. This can be countered by understanding the gap between appearance and reality, that phenomena do not exist as they appear. He said the highest school of thought, the Middle Way Consequentialists (Prasangika Madhyamikas), assert that it is not that things do not exist at all, nor that they exist as they appear, but that things are merely designated.

Dedication verses of the Samantabhadra Prayer were recited to conclude the session. A delicious vegetarian lunch was served to everyone present where they sat, at the end of which His Holiness returned to his hotel while other scholars reviewed with the audience what he had taught in the morning. A second session will be held tomorrow.